It’s not easy to replicate the success of Tesla (NASDAQ:). After pulling off a combination of high-volume manufacturing and cash generation, the California-based electric vehicle-maker now commands a market capitalization of $633 billion, more than the combined value of the US’s “Big Three” auto-makers.

Taking note of Tesla’s success—and its high-flying stock price—investors started betting on the stocks of smaller EV manufacturers, in hopes they could provide similar returns as the global market for electric cars expands. One such stock, which got overwhelming support from Wall Street analysts, was Chinese electric SUV-maker Nio (NYSE:).

Nio’s New York-listed shares have risen more than 1,400% in the past year, giving the company a valuation of than $60 billion, more than General Motors’ (NYSE:) valuation earlier this year. But, after hitting a record high of $66.99 on Jan. 11, NIO shares have lost more than 40% of their value, sparking a debate about whether this is the right time to buy this stock. 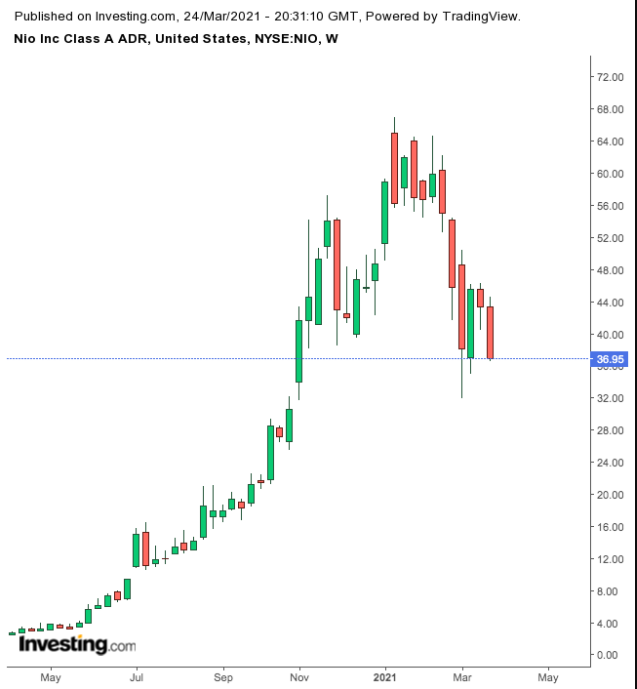 The company’s latest , released early this month, shows that the company is on track to sell more cars after recovering from the brink of collapse in 2019, when it faced a severe cash crunch.

Though the car-maker is still in the red and missed analysts’ consensus estimate for net loss in its fourth quarter, its vehicle sales are gaining pace in the key battleground for EV manufacturers. Nio delivered 17,353 vehicles in China in Q4, a new quarterly delivery record.

Electric-vehicle demand in the world’s biggest car market is set to soar in coming years, according to Bloomberg, as consumers embrace cleaner automobiles and the cost of EVs tumble.

Research firm Canalys said in a report this month that EV sales in China may grow more than 50% in 2021, helped by an excellent network of standardized public EV chargers, good government support and a return to strong consumer demand.

In a research note this month, Japanese-based Mizuho Financial Group initiated coverage of the electric vehicle company with a buy rating, saying it sees “significant upside” in its shares. The note said:

“NIO is a leader and innovator in the premium automotive EV segment; it is domiciled in China, the largest and most prolific EV market globally. NIO has a key differentiation from peers: a premium EV offering with a lower cost of ownership through its novel Battery-as-a-Service battery swap module.”

Despite analysts’ favorable ratings on the stock, NIO is under immense selling pressure since the company warned this month that its production could be constrained in the first quarter of this year due to global chip shortages.

While monthly capacity has risen to 10,000 units, production will remain at 7,500 “due to supply-chain limits, including the chip shortage,” NIO CEO William Li told reporters. “Though we believe we are able to meet expected demand for the second quarter, there’s indeed a higher risk,” Li said.

NIO stock looks attractive after its recent weakness, which has taken care of a lot of froth, built up after last year’s unprecedented rally. The company has a strong start in China, where it’s in a good position to compete with Tesla and other players. For investors who want exposure to the Chinese EV market, Nio provides a good entry point.