Futures contracts on the , , and found their footing on Tuesday morning and global shares recovered from the last session selloff as the outlook for additional US fiscal support outweighed concerns on Wednesday’s vote to impeach President Donald Trump or upcoming US earnings results.

Treasury yields continue their march north, while gold is starting to recover.

All four major US contracts were modestly higher, with those on the Russell 2000 in the lead, after the underlying outperformed on Monday, when tech bulls dug in their heels during the Wall Street session, to endure a modest decline of less than 0.1%.

In Europe on Tuesday, the Index advanced, driven by oil & gas and travel & leisure shares. These sectors took the worst hit during coronavirus lockdowns and therefore have the most to gain in the advent of a return to a normal economy. The rebound shows that investors are putting their eggs in the COVID-19 vaccine basket, disregarding the rampant virus infection rates that continue to stifle the recovery.

Oil producers BP (LON:), Royal Dutch Shell (LON:) and Total SA (PA:) rebounded from Monday’s . The recovery was sparked by China, the world’s largest oil importer, enforcing a strict lockdown in areas surrounding Beijing, after there was a COVID-19 outbreak in the city of Langfang, in Hebei. Today’s gains were also on expectations of a US drawdown during today’s weekly API release.

The fundamental narrative for this morning’s European risk-on is that yesterday, traders cashed in profits they incurred after the Blue Sweep in Georgia’s US Senate runoffs repaved the path to additional fiscal stimulus, the trigger for last week’s share price advances. However, the STOXX 600 may experience further pressure, based on the technicals. 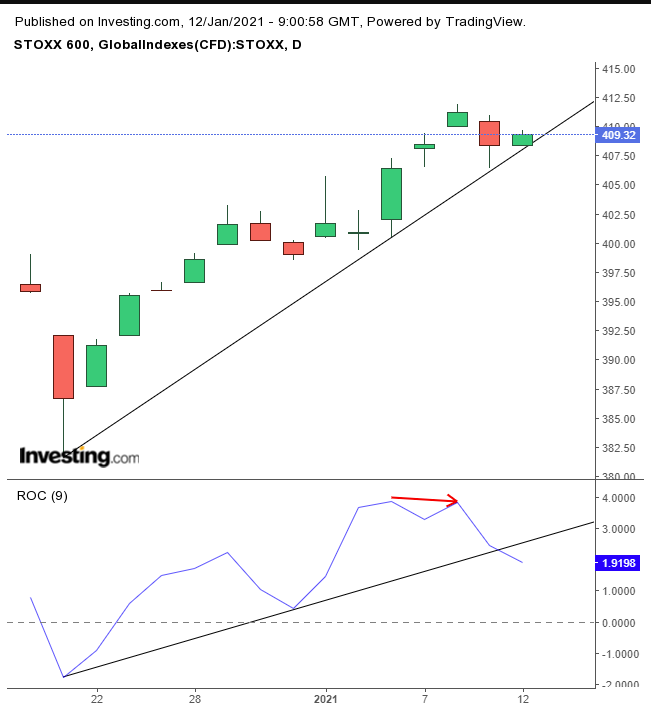 On Monday, the pan-European gauge may have completed an Evening Star—a three-candle pattern reversal, backed by a peaking ROC following a negative divergence. Though bulls fought back bravely, by closing well off session lows—the top of Thursday’s first candle of the pattern—and today they picked up where they left off, pushing off the uptrend line. Friday’s highs will be the test of whether the bullish counterattack will prevail or whether bears are biding their time, ahead of a second attempt to push the price below its uptrend line since the Dec. 21 low.

Stocks in Asia were mixed on Tuesday, with China’s (+2.2%) outperforming among the major regional gauges. The blue-chip Index surged to a 13-year high, inching toward its October 2007 record. This benchmark is enjoying its best ever start to a year, now that its nemesis, US President Donald Trump is almost out of the picture.

US shares dropped Monday for the first time in five days. Investors seemed to experience a rare pang of consciousness as prices hovered near their most expensive in history, ahead of earnings season which starts in earnest on Friday when JPMorgan Chase (NYSE:), Citigroup (NYSE:) and Wells Fargo (NYSE:) all report. More likely the selloff was a healthy correction on profit-taking in the aftermath of last week’s strong performance. Still, investors could find more value at this point in the obvious place—the tech sector.

Twitter (NYSE:) plummeted 6.4% after the platform permanently banned President Trump on Monday following a riot caused by a mob of his supporters storming the Capitol. Facebook (NASDAQ:), which also suspended Trump’s account, dropped 4%. Without getting into the politics, this controversial decision—which angered conservatives—may be a breakthrough toward a discussion and regulations on social media platforms. 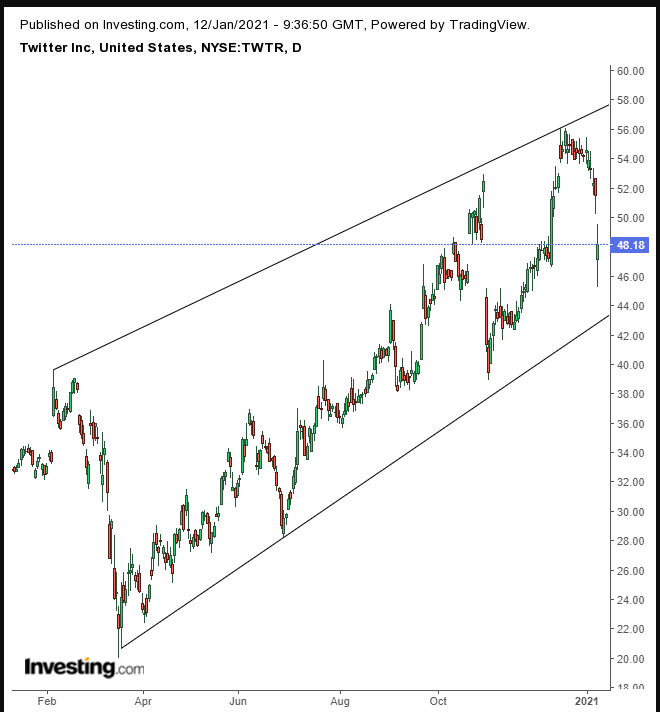 In terms of investing, Twitter’s decline, although exacerbated by politics, is within the normal path of a corrective move within an uptrend, while Facebook—already beset by antitrust problems—seems to be topping out.

Yields, including on the note, for the sixth day, demonstrating that investors are comfortable with the direction of stocks. 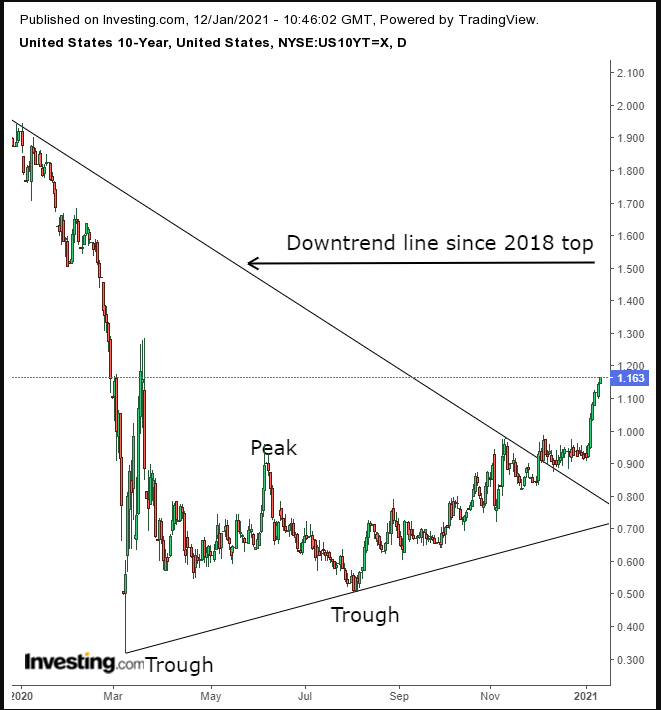 This is the longest selloff in Treasuries since the 7-day yield advance, that ended on Oct. 22. Rates surpassed the 1.15 yield, the highest since mid-March.

The , however, gave up a five-day advance, turning into a decline, despite support by elevated Treasury yields. 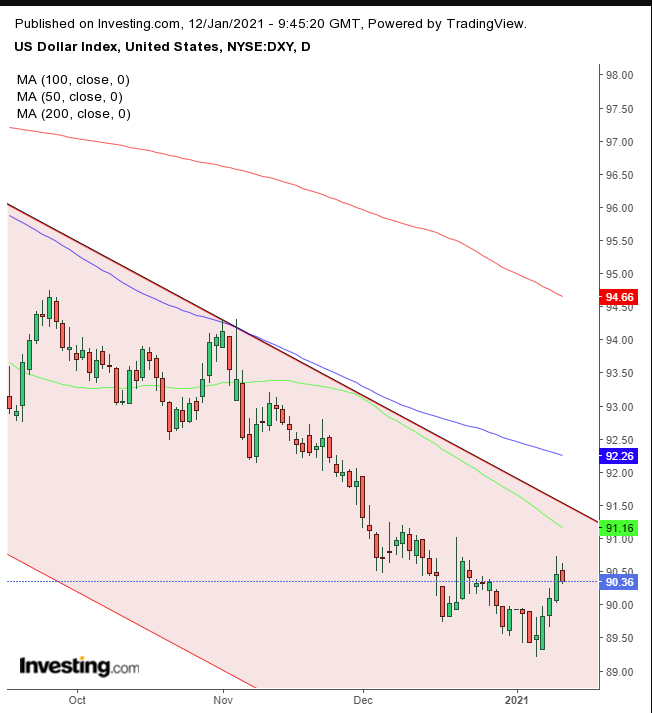 Technically, the greenback is trading within a downtrend since the currency’s March peak.

is showing signs of life today, as it rebounds despite risk-on. On Monday it rebounded from a steep selloff into gains, even as the dollar continued to strengthen. Finally, and even after much talk about Bitcoin siphoning capital away from gold, the yellow metal advanced. It rose yesterday as Bitcoin weakened, but is continuing to rise even as Bitcoin recovers today. 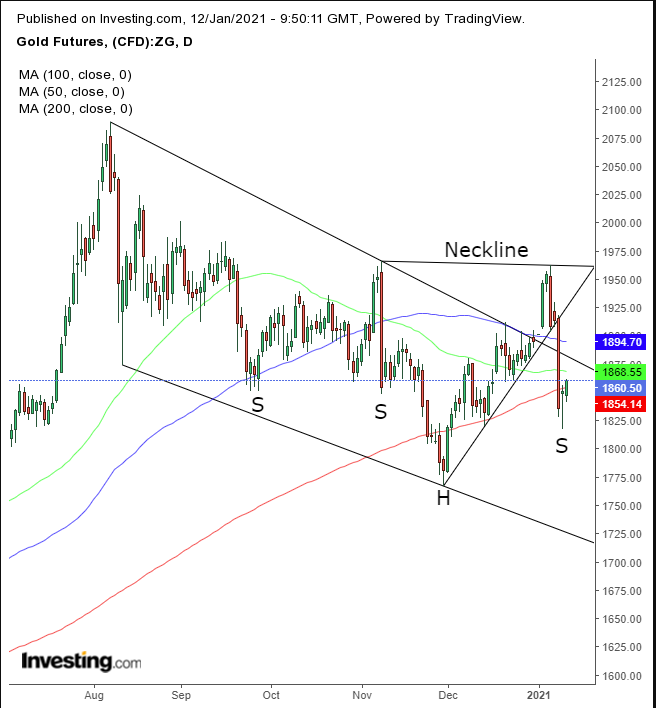 From a technical perspective, gold is building on yesterday’s hammer, as it climbs back over the 200 DMA, a support since May 2019 as it potentially trades along a complex H&S pattern.

has been wavering below the $36,000 level, slightly above yesterday’s close. On Monday, the digital asset suffered a 16.7% plunge but managed to close at less than half that, for a loss of 7.2%, the Fibonacci’s minimum retracement and the price’s uptrend line.

climbed above $53—and is trading at the very top of the session for good measure—for the first time since Feb. 21, ahead of Wednesday’s , which is expected to show a drawdown. 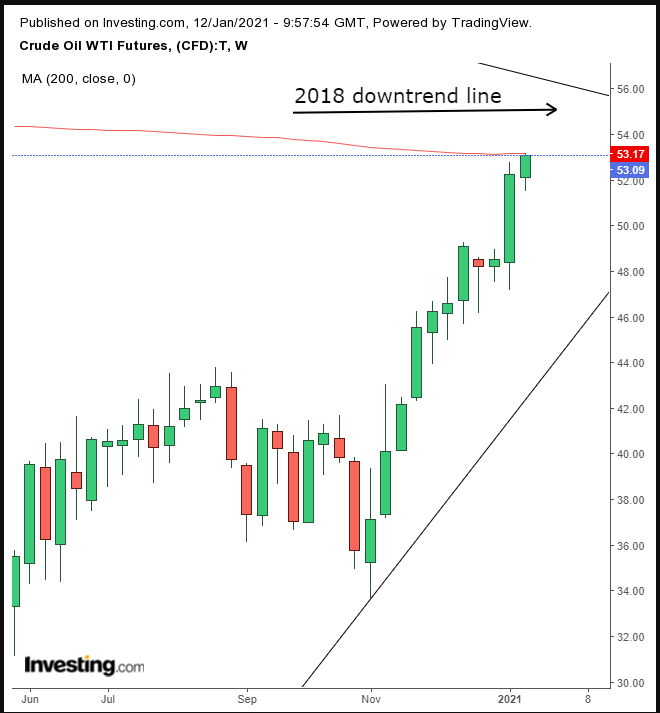 The price found resistance by the 200-week MA, a staunch support between May 2019 and January 2020, turning into resistance in February. The price is also nearing its downtrend line since the October 2018 high.