Blockchain technology is revolutionary for the world’s financial system. Payments that once took hours, if not days, can now be done in the blink of an eye with blockchain technology. Blockchain and digital currencies are the modern-day financial chicken and egg dilemma. However, it doesn’t matter which came first; what’s significant is that they both exist.

The ascent of and the other, over 8,700, digital currencies is a product of our technological revolution. Humans resist change, but that does not mean they cannot adapt; it just takes time. The rise of Bitcoin from six cents in 2010 to nearly $60,000 per token in 2021 provides a massive financial incentive for people and governments to make changes in this sphere. Assume most governments are working behind the scenes to create the digital money of the future that embraces blockchain technology.

Meanwhile, the rapid rise of the asset class that was flirting with a $1.8 trillion market cap level last week puts extreme pressure on the status quo. A substantial part of government power comes from its control of the money supply. Left alone, digital currencies threaten that position as the underlying philosophy of cryptocurrencies is that they are free markets with value created only by buyers and sellers without intervention from political systems or central banks. Moreover, they stand to change, if not destroy, the institutional global banking system’s current form.

While the outcome for the financial technology isn’t clear, governments and financial institutions will put up more than a fight to maintain control. However, this burgeoning technological innovation isn’t going away; in fact, it’s set to flourish.

I favor pick-and-shovel plays in the cryptocurrency sector—that is, a strategy of investing in the underlying technology rather than the final service or product. The most significant could be on the horizon as Coinbase, a US digital currency exchange prepares for its initial public offering.

began trading on the Chicago Mercantile Exchange at the end of 2017. The price of the leading digital currency had already moved to over the $20,000 per token level at that time.

Meanwhile, the digital currency asset class’s market cap stood at $1.815 trillion with 8859 other tokens aside from Bitcoin and Ethereum competing for market share. The two leading cryptos control over 72.5% of the market cap.

Trading or investing in digital currencies requires participation in a platform and a wallet or custodian to store the tokens. Coinbase is a digital currency exchange with headquarters in San Francisco, California, in the US.

Coinbase brokers exchanges for a wide range of cryptocurrencies. Coinbase Global Inc is planning an initial public offering of shares with the latest indications the company has a pre-IPO valuation of between $90 and $100 billion. The exchange, led by CEO Brian Armstrong, is opting for a direct NASDAQ list instead of a traditional IPO. Although a listing date hasn’t yet been disclosed, shares will trade under the ticker COIN.

Owners of Class A common stock will be able to sell in the direct listing as they will not be subject to lock-up agreements. The most recent filings disclose that Class A stock carries one vote per share. Class B carries 20 votes per share. Coinbase does not intend to raise any proceeds in the transaction, making the share listing a liquidity event for founders, employees, and early investors.

Coinbase is an exchange like the CME or ICE

Coinbase is the leading US-based cryptocurrency exchange, with 24-hour trading volume of around $3.2 billion. The Coinbase exchange has a significant market share of global digital currency trading.

If the price action in the CME and ICE since their IPOs is a guide, the shares will sell like hotcakes. 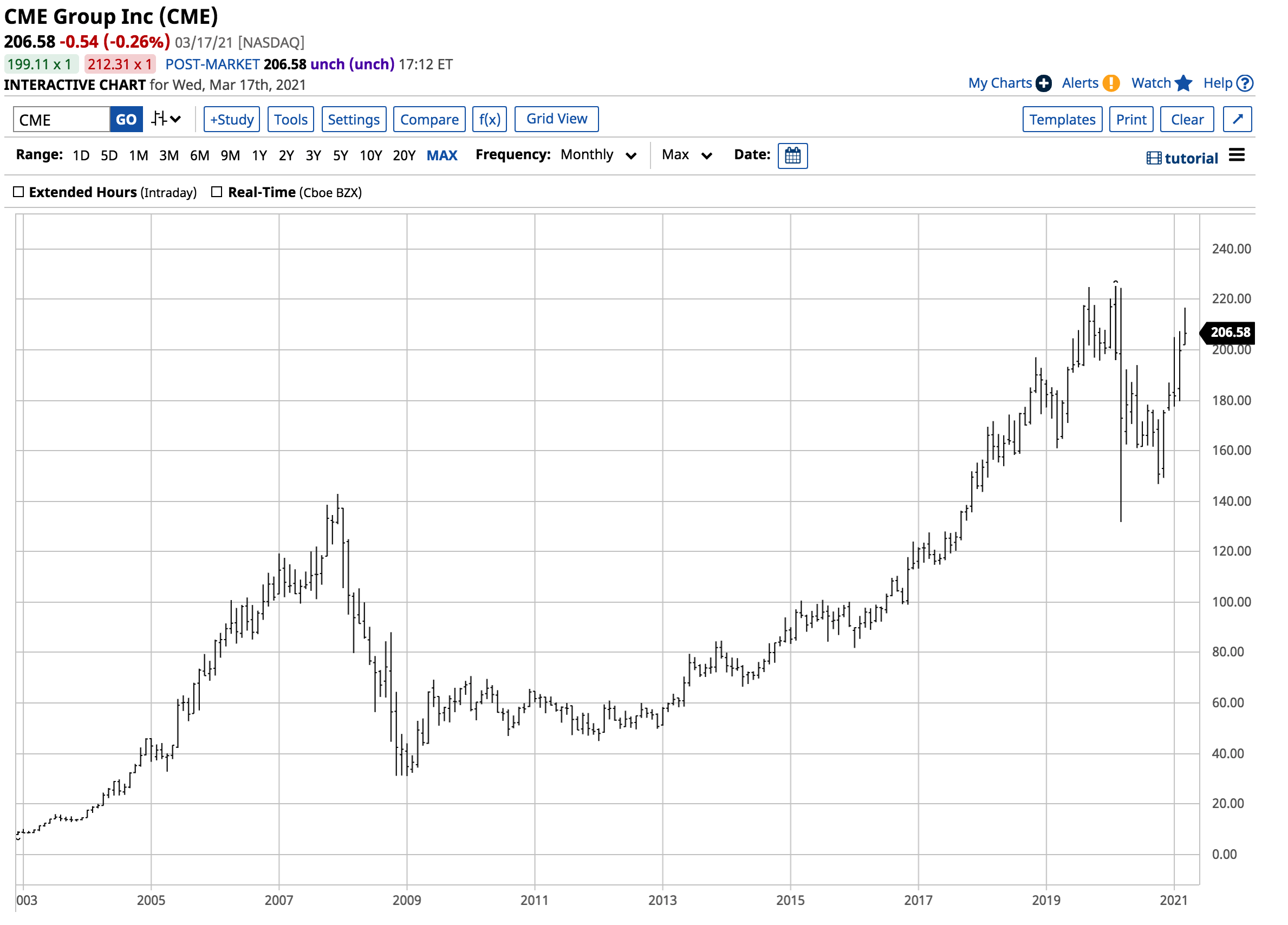 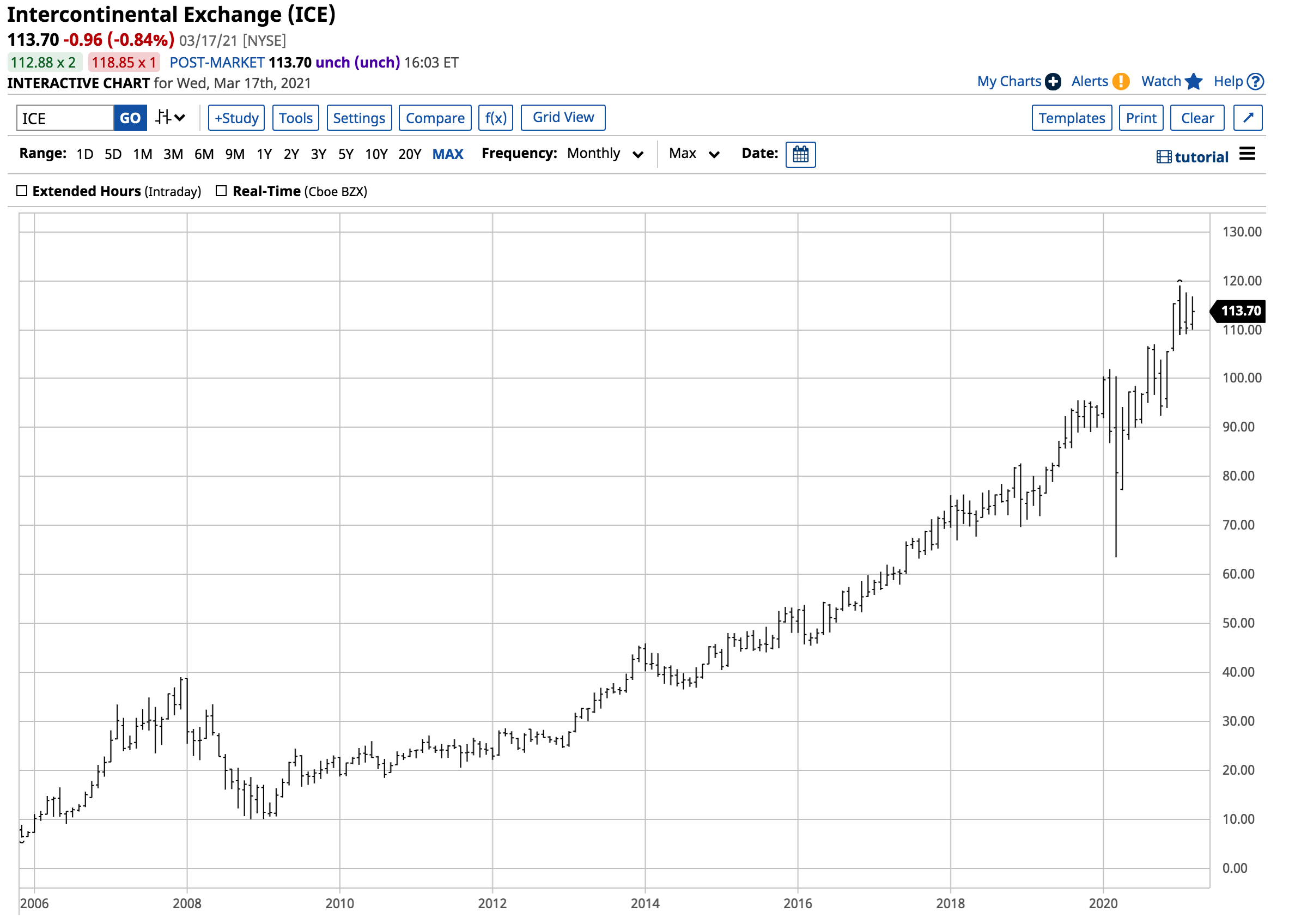 At valuations of $90-$100 billion, Coinbase’s market cap would be even higher. Bear in mind too, the CME and ICE are two established exchanges offering a wide range of products across all asset markets.

In the classic 1983 movie, Trading Places, the Duke brothers explained their lucrative business to Billy Ray Valentine, saying: “The good part, William, is that, no matter whether our clients make or lose money, Duke & Duke get the commissions.” Billy Ray said, “Sounds to me like you guys are a couple of bookies.”

Coinbase is the leading cryptocurrency “bookie.” Right now, Coinbase does not charge customers for storing cryptocurrencies in its popular wallet service. However, the company charges a margin fee of about 0.50% for crypto purchases and sales, with the rate changing depending on market conditions.

The Coinbase fee is the commission on all digital currency transactions. The fee varies depending on location and the size of the transaction.

The Coinbase Card is a physical Visa (NYSE:) debit card and app that facilitates spending cryptocurrencies for goods and services by converting crypto into US dollars.

, a , is built on the Ethereum platform and is Coinbase’s own cryptocurrency. One USD Coin is always worth one US dollar.

The exchange’s value is moving higher, but it is a function of Bitcoin’s path

A valuation of $90 to $100 billion is steep compared to the current levels of the world’s leading exchanges, the CME and ICE. However, the rise of the cryptocurrency market has plenty of investors excited about its future.

It comes as no surprise then that investors are lining up to buy shares in the exchange that has emerged as the leading “bookie” and more.

The offering’s structure, requiring no lock-up period, creates the opportunity for current shareholders to extract massive profits. In 2018, a formal valuation put Coinbase’s worth at $8 billion. In 2020, the company took in $1.30 billion in revenues. Meanwhile, the direct IPO allows Coinbase to skip prohibitive investment banking fees by going directly to a market listing.

Two issues could cause speedbumps for the exchange. If gravity causes the parabolic moves in the crypto asset class to end and prices drop, trading volumes could dry up, impacting Coinbase’s revenues. Moreover, government regulations that run contrary to the overall market’s libertarian philosophy could take some of the wind out of the bullish sails.

However, as an exchange, Coinbase would give the US and other governments a platform to regulate, paving the way toward greater acceptance.

An ETF would turbocharge the IPO

We have seen how the introduction of futures contracts pushed Bitcoin and Ethereum to all-time highs. The next step in the asset class would be a suite of crypto ETF and ETN products that replicate the values of the growing number of digital currencies or crypto baskets. ETF and ETN products tend to increase trading volumes and liquidity in the underlying markets they represent. They create proxy assets that trade on the stock market and are easily accessible for a huge addressable market of investors and traders.

Meanwhile, the Coinbase IPO is likely to attract a frenzy of activity and demand when it occurs. Coinbase will be the first digital currency exchange that trades on the stock market.

As the Duke brothers said, no matter if cryptos move higher or lower, Coinbase will make its commission.