With the Q4 2020 earnings season kicking off this week, results from some of the top U.S. banks could show they’re weathering the economic downturn much better than earlier anticipated. In fact, reports could even reveal that the bottom in the current downturn cycle is already in the rear-view mirror.

The reversal will be in sharp contrast to their losses during the first half of the year, when the banks had set aside massive amounts to deal with bad loans fuelled by the pandemic-induced recession. These provisions hurt their earnings at a time when it was hard to predict how the future would unfold, especially when there was uncertainty about vaccine success.

But as we enter 2021, the outlook for banks has improved considerably, mainly driven by expectations of a surge in federal spending after the success of President-elect Joe Biden, a bump in interest rates and strong performance by their underwriting and trading business.

Last month’s reintroduction of bank stock buybacks and Biden’s selection of Janet Yellen as Treasury Secretary also helped fuel a rally in bank shares. The has jumped 16% during the past month, far outpacing the Index’s 4% advance during the same period. Last year, the bank gauge tumbled 14%, while the broader market rose 16%.

JPMorgan, one of the strong performers, will likely report profits of $2.42 a share on sales of $28.02 billion, according to analysts’ estimates. 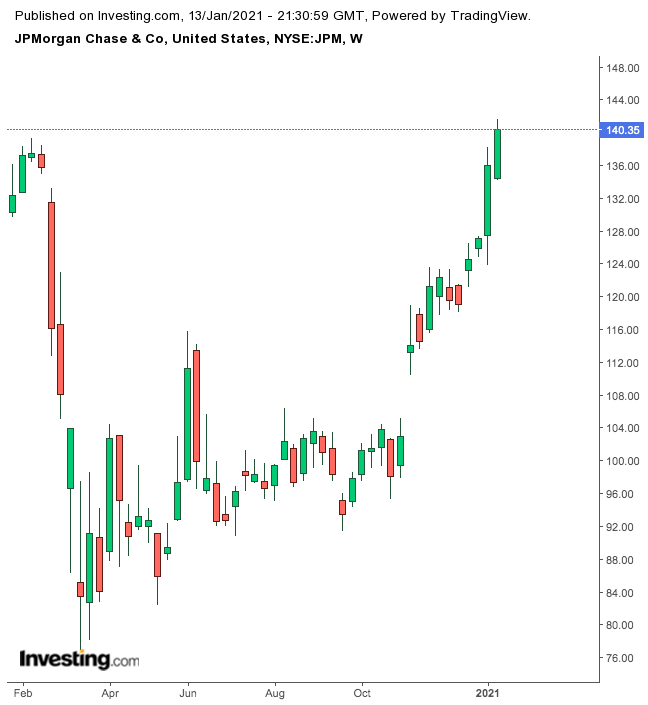 JPM posted a surprise increase in , fuelled by a 30% jump in revenue from markets, as surging stock prices increased trading volumes. Its strength in trading and underwriting business is likely to boost the bottom line again in Q4.

Another star performer in the economy hurt by the COVID-19 is Goldman Sachs Group Inc. (NYSE: ). With a smaller lending business and heavy exposure to trading, Goldman is benefiting from the pandemic as investors scrambled to reset their portfolios.

In , Goldman’s profit nearly doubled, the latest confirmation that even in a pandemic and a recession, Wall Street can still make money. That performance triggered a powerful move in GS stock, which is now trading at a record high, gaining more than 40% in the past quarter. Its shares closed Wednesday at $302.94, up 0.24% on the day. 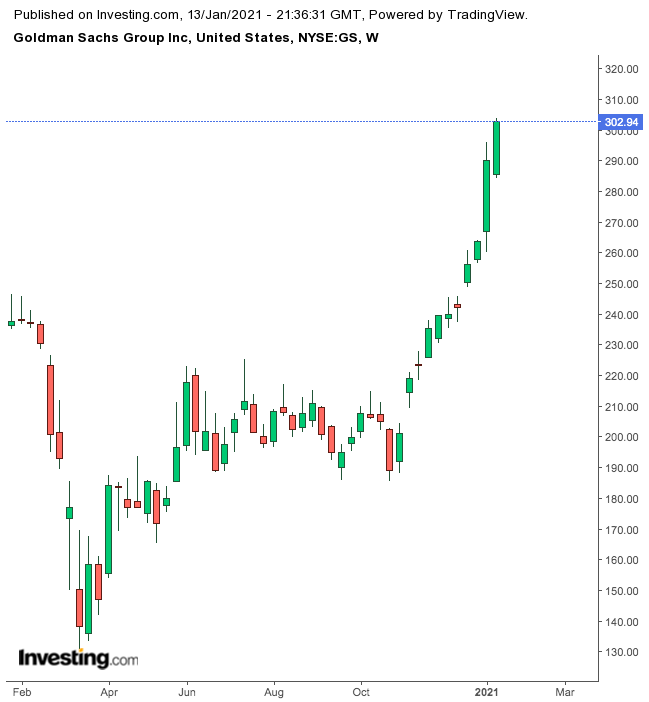 Analysts forecast $7.04-a-share profit for Goldman Sachs for the final quarter of 2020 on sales of $9.72 billion. The lender is scheduled to report on Jan. 19.

He highlighted stock outperformance since the Fed released its special crisis stress test results in December, which aligned with his view that bank returns should “rebound and recoup” nearly three-quarters of 2020’s decline during the next two years.

Banks with strong trading units are outperforming their peers even when the economy remains under extreme pressure due to the pandemic. This trend has likely boosted their earnings in Q4, justifying a huge jump in their share values.