This article was written exclusively for Investing.com.

It is starting to look like silver will mount another attack on the record peak from forty-one years ago. The conditions could be developing for silver to blow through the 1980 high as a hot knife goes through butter.

Silver tends to be the precious metal that attracts the most speculative interest. It has a long history of substantial percentage moves on the up and downside. In 2020, the silver market dropped to an eleven-year low. Four months later, it hit a seven-year high.

In early 2021, the bullish stars appear to be lining up for the metal that has a long history as a means of exchange along with rising industrial demand. Solar panels, electronics, and many other consumer goods require silver as the metal is an excellent conductor of heat and electricity.

A new silver era could be dawning in 2021 for the metal that has played an integral role for thousands of years. The iShares Silver Trust ETF (NYSE:) reports that it holds 100% of its $14.79 billion in net assets in silver. SLV is not the only derivative product that replicates the price action in the silver market, but it is the leading exchange traded fund product. However, some market participants believe that silver ETF and ETN products do not have all the metal they claim.

How did GameStop shine a light on silver?

Obviously, GameStop (NYSE:) is not silver and vice versa. However, both are assets that reflect the current environment in markets.

The David versus Goliath situation, where a herd of traders and investors take on the Wall Street elite hedge funds, makes GME and silver two peas in a far more substantial pod. In the US, the world’s great capitalistic system, the rise of economic power from social media platforms is a challenge to the status quo, elevating a constitutional issue as the first amendment guarantees freedom of speech. However, government regulations prevent market manipulation. 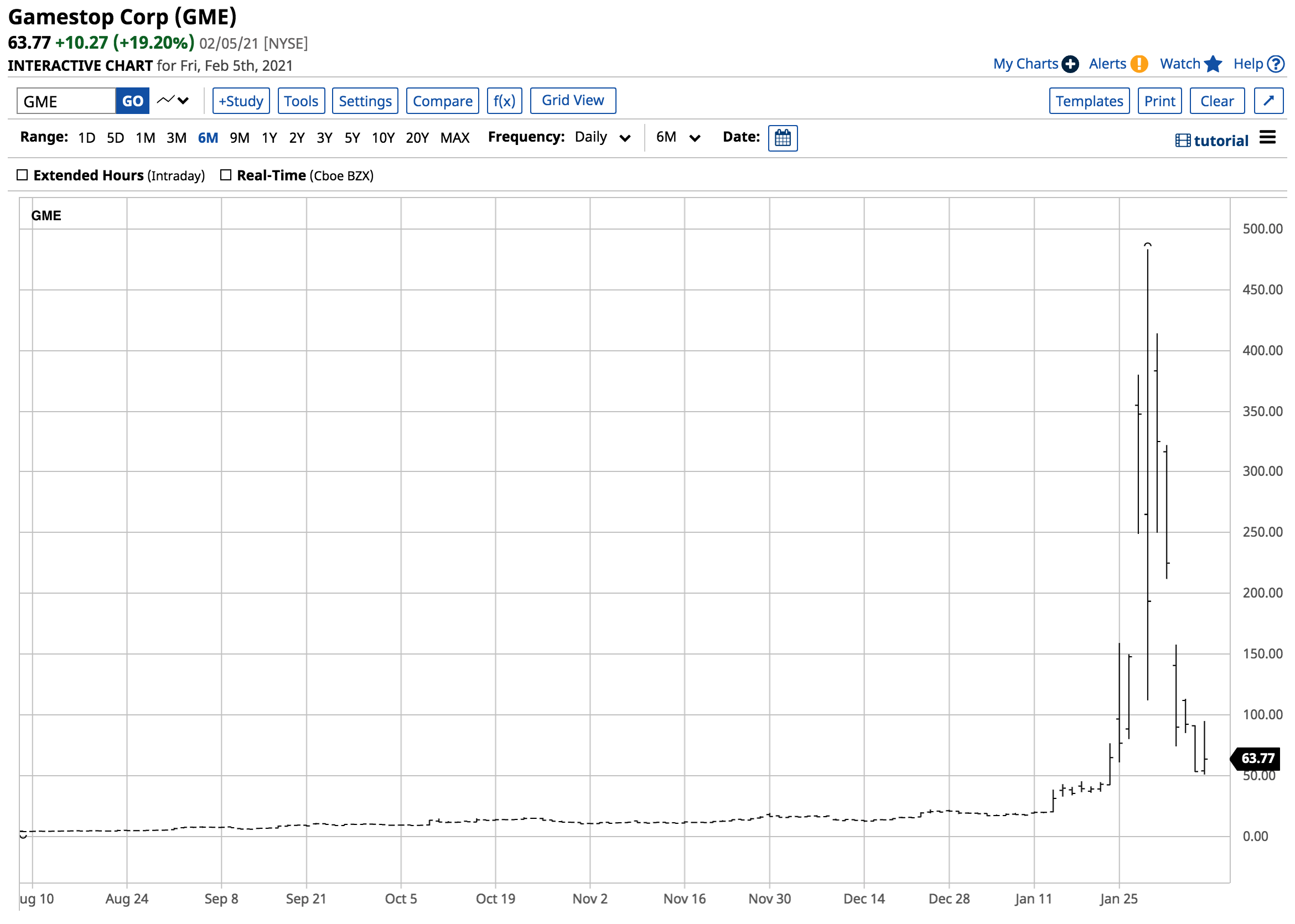 In early October 2020, GME shares were trading below $10 per share. Short interest in the stock caused a herd of traders and investors on social media platforms to buy the stock, realizing that hedge funds holding speculative short positions would eventually need to offset their risk positions by purchasing the shares.

Holding a short position requires borrowing the shares. The hedge funds that sold GME without owning the shares are the Goliath as they have access to billions in assets and can leverage their capital through financial institutions. The retail investors and traders on social media platforms like Reddit bought shares through platforms like Robinhood, which offer free trading commission.

Media reports would like market participants to believe that Robinhood lived up to its name—taking from the wealthy Wall Street elite and transferring that wealth to the far wider retail sector, the Davids. GME shares rose to a high of around $500 per share in the premarket on Jan. 28 and $483 during market hours. It collapsed to the $63.77 level at the end of last week. Still, GME was over six times its early October level.

The David versus Goliath analogy may be more of a myth than a reality. Senvest Management, a hedge fund, made $700 million on GME on the long side.

Silver is a highly speculative precious metal with a penchant to deliver substantial percentage gains and losses when it decides to move. The silver market is rife with those who believe it is manipulated by dominant market forces, making it the perfect target for those who had some success with GME over the past months. Moreover, the landscape for the silver market remains decidedly bullish from technical and fundamental perspectives.

For the silver market, 2020 was a wild year. The price not only moved from the lowest level since 2009 to the highest since 2013, but it put in a bullish pattern on the long-term annual chart. 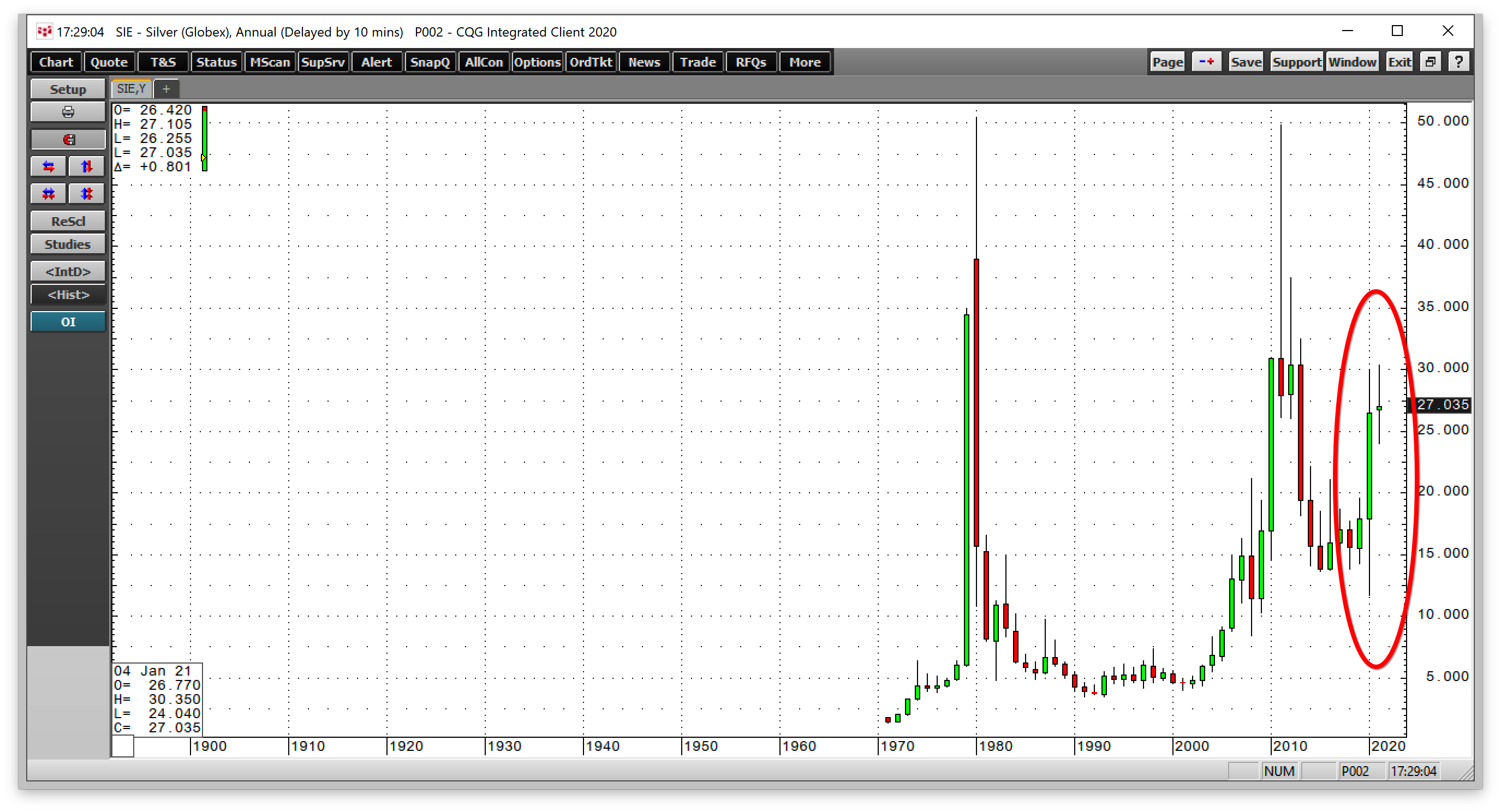 The yearly silver futures chart dating back to 1971 highlights that the precious metal traded to a lower low than the previous year in 2020 and closed above the prior year’s high, putting in a bullish key reversal pattern. At the same time, silver broke out to the upside, above critical technical resistance at the July 2016 $21.095 high.

The social media platform crowd has been buying silver, which could put the all-time high of $50.32 from 1980 in play. David likes silver, and Goliath has traditionally worried about silver when it climbs, because of the signal it sends about the overall currency and financial markets. However, some of the leading players with lots of capital are sitting on the long side of the silver market these days.

Fundamentals may not favor GameStop, but silver is a different story. Silver has a long history as a means of exchange or currency.

Long before there were dollars, euros, pounds, yen, Bitcoin, or any other means of exchange in circulation today, and silver were currencies. The two precious metals are mentioned often in the old testament of the bible, and archeological surveys highlight their presence and use in the ancient financial systems.

When it comes to currency, gold has historically held a position as banknotes, and silver was the change we carry in our pockets. My grandfather referred to the change jingling in his pockets as silver as many of the coins contained the metal.

It makes sense that the retail world is going after the silver market as it represents class division. It may make even more sense that the financial media is highlighting the narrative that has become so popular.

Meanwhile, accommodative monetary policy in the form of historically low short-term rates and quantitative easing puts a cap on rates further out along the yield curve, which is bullish for silver. The US Fed continues to purchase $120 billion in debt securities each month. The flood of liquidity from central banks to stabilize the global economy in the face of the worldwide pandemic erodes fiat currencies’ purchasing power.

The bottom line: governments can print fiat currencies to their hearts’ content. The only way to create more gold and silver is to extract them from the earth’s crust via mining activities.

Fiscal policy is bullish for the speculative precious metal

While the central bank’s accommodative monetary policy stance is bullish for silver, government fiscal stimulus only enhances the fundamental case for silver and gold. In 2008, the US Treasury borrowed a record $530 billion to fund stimulus. In May 2020, it borrowed $3 trillion, and more is on the horizon in 2021.

The US and other governments do not have to run the printing presses to create more currency these days. All they need to do is press a button in this technological age. The US national debt has swelled to $27.880 trillion as of the end of last week. By this time next year, the level is likely to be over the $30 trillion level.

Monetary and fiscal stimulus erode fiat currencies’ purchasing power, increasing inflationary pressures. The US Fed is encouraging more inflation through both its policies and statements. In 2020, the central bank made a not so subtle change to boost its inflation target from 2% to an average of 2%. In many statements since the move, the Fed has told markets that they would tolerate inflation above 2% for an extended period without making any changes to interest rate policy.

Taming inflation can be a challenge as the economic condition often becomes a wild beast. The Fed is taking a leap of faith by encouraging the animal from its cage.

Current monetary and fiscal policy is highly supportive of higher silver and gold prices. When it comes to industrial use, silver is a critical component in electronics and solar panels. As the world moves towards a greener path, demand or silver is rising.

Silver tends to be a leader on a percentage basis because it attracts far more speculative interest. An ounce of silver is way more available to smaller investors than gold because of its lower prices. Silver is a populist investment. However, silver is also a mysterious metal that is surrounded by conspiracy and manipulation theories.

Some market participants believe governments and central banks collude with financial institutions to keep a lid on the silver market. Without going into all of the theories, a quick internet search will reveal more than a few arguments that a giant hand sits on top of silver’s price.

Meanwhile, silver and gold have been at the center of many civil and criminal cases where traders at the leading financial institutions were charged with manipulation via price-fixing and spoofing. Some market participants believe financial institutions hold massive risk positions in the silver market. Moreover, they think that the derivatives market creates a situation where there is not enough silver and gold worldwide to satisfy the investors in products, were they to all call for delivery. Fractional lending and banking strategies may validate some of the contention.

GME and silver are two assets in the Davids’ crosshairs, and silver could present an even more compelling case than GameStop. Silver broke out to the upside from a technical perspective. Fundamentals are bullish because of monetary and fiscal policies.

Moreover, the aura of elite manipulation by governments, central banks, monetary authorities, and leading financial institutions make silver an even sexier target for the Davids than GME shares. The current environment could create a perfect bullish storm for silver that takes the metal above the 1980 record high at $50.32 per ounce on the nearby COMEX futures contract.

Silver has never looked as bullish as it does in early 2021 as the Davids seem ready to push the price far higher after success with GME, which could have been a training session for a far more significant market event. Meanwhile, you can be sure the lion’s share of the profits in the bull market will still wind up in the oversized pockets of the Goliaths.