We are coming up on the first anniversary of crude oil’s descent below zero on the nearby NYMEX Crude oil futures contract. On Apr. 20, 2020, the expiring May contract not only fell into negative territory, but it also plunged below negative $40 per barrel.

Market participants holding long positions without the ability to take delivery and store the energy commodity had to sell at any price since the NYMEX contract calls for West Texas Intermediate crude oil, landlocked petroleum. Nearby ICE also declined, but they hit bottom at $16 per barrel, the lowest level of this century. Brent remained in positive territory because the seaborne petroleum had storage options available to longs.

The global pandemic of 2020 caused demand to fall to unprecedented levels. One year later, optimism that vaccines create herd immunity to the virus pushed NYMEX to nearly $69 per barrel and Brent above the $71 level. Meanwhile, the energy commodity hit a speed bump in mid-March. On Mar. 18, crude oil became a falling knife, posting the worst daily performance in 2021 and since last April.

A high on Mar. 8 after OPEC+’s decision and an attack on Saudi production 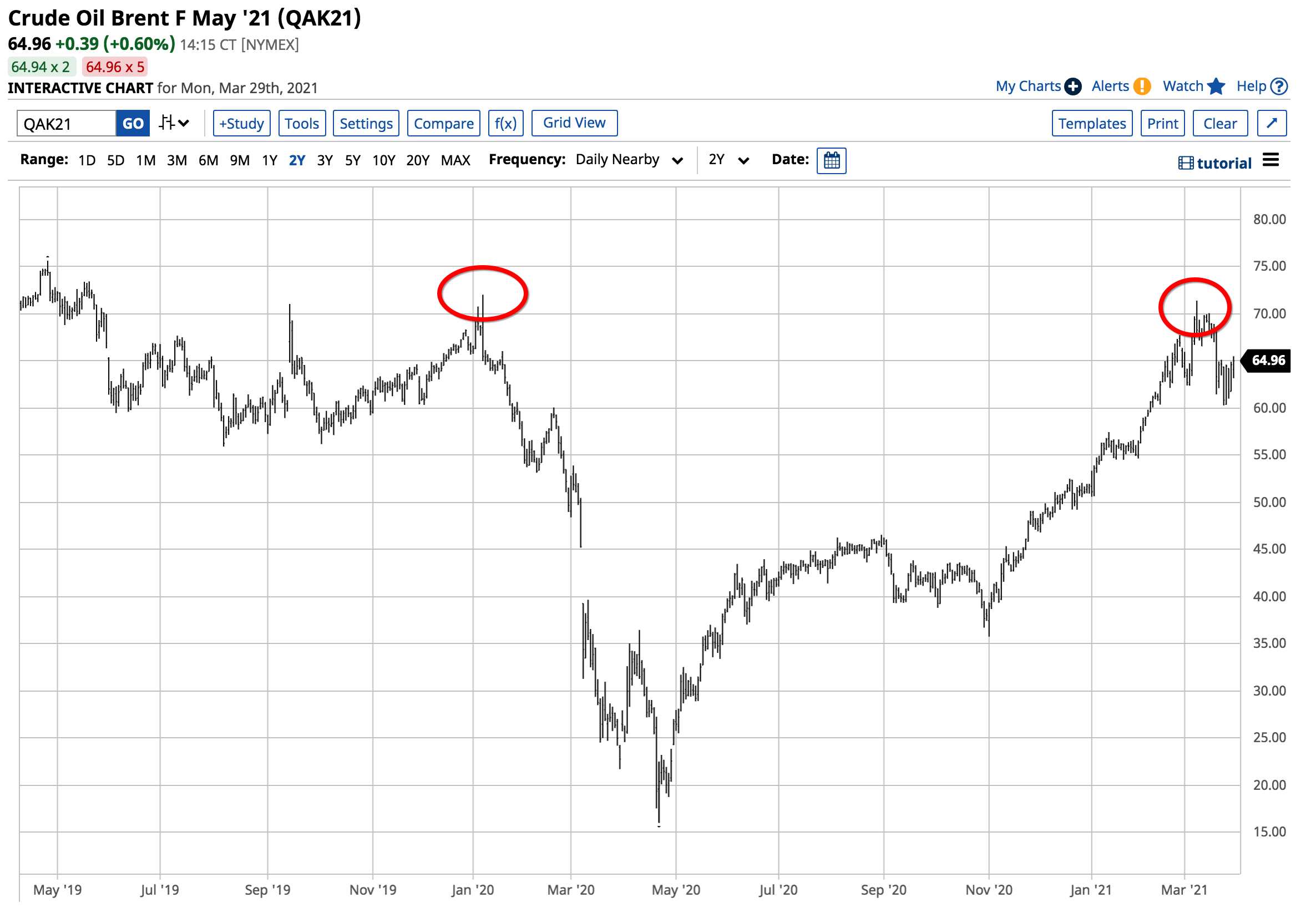 In early November 2020, WTI and Brent futures fell to far higher lows than during April 2020 when the NYMEX futures moved below zero for the first time, and Brent traded to the lowest price of this century at $16 per barrel.

Nearby WTI futures reached a low of $33.64 on Nov. 2, and Brent moved to a bottom of $35.73 per barrel. Then the prices of the two benchmarks embarked on rallies that took them to the Mar. 8 peaks.

Crude oil has a habit of taking the stairs higher during bullish periods and an elevator to the downside when corrections occur. The moves in April 2020 were freefalls as the energy commodity took the elevator shaft straight down rather than an express car.

On Mar. 18, the elevator was back as crude oil prices plunged for the first time in 2021.

The daily chart shows that NYMEX futures posted an almost $5 decline on Mar. 18 as the price of the nearby May contract reached a bottom at $58.28 per barrel, with the continuous contract falling to the $58.20 level. On Mar. 23, it reached a lower low at $57.25.

The chart shows that the total number of open long and short positions in the NYMEX crude oil market declined from over 2.54 million to around the 2.311 million contract level as speculative longs scrambled to liquidate positions. The selling came as April futures were rolling to May. 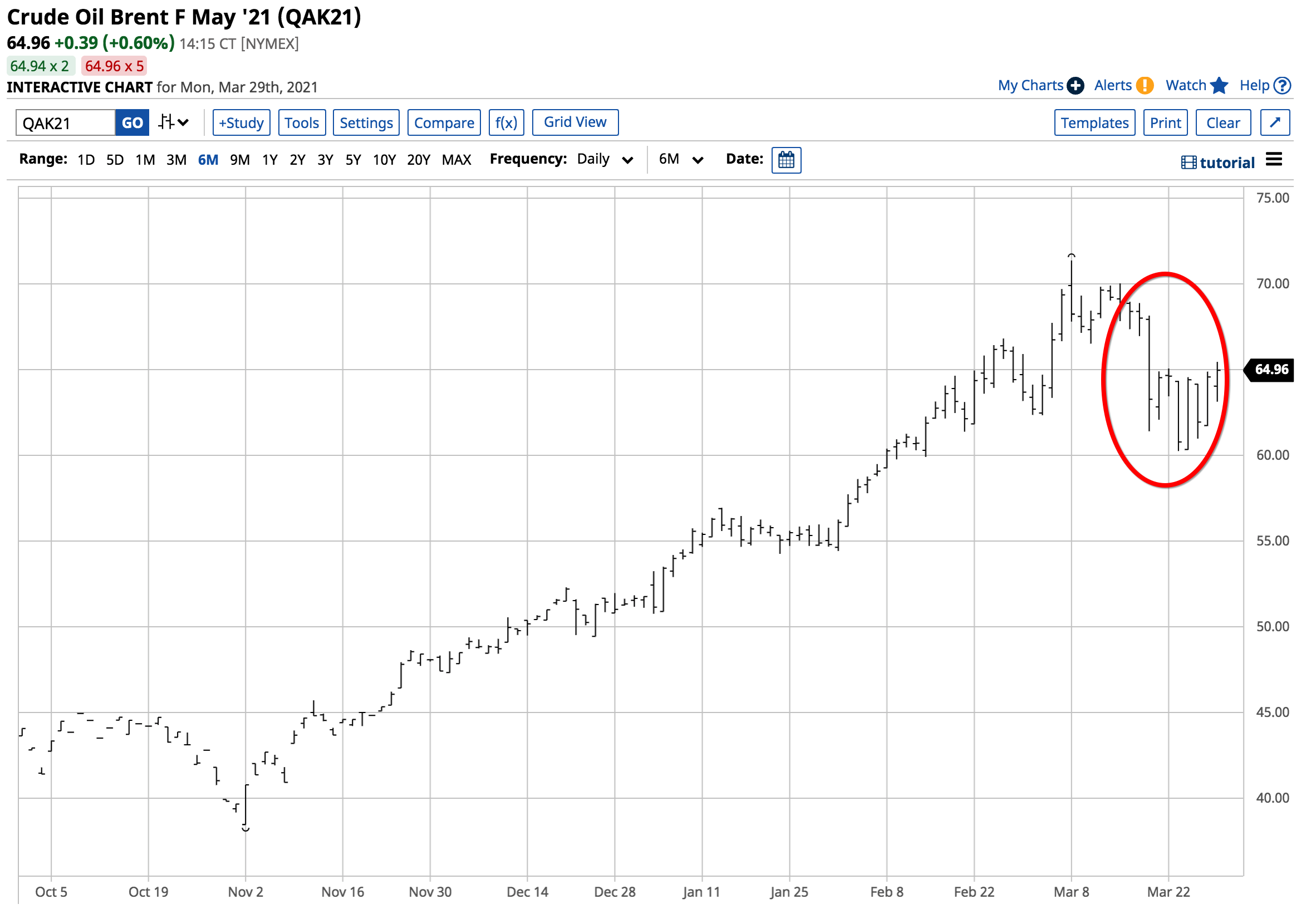 The flush to the downside on Mar. 18 was a sign that the oil market became a bit overexuberant with optimism that energy demand is storming back as vaccines create herd immunity to COVID-19. However, the rally from November through Mar. 8 is likely sustainable because of the shift in oil’s fundamental supply and demand equation.

On Jan. 20, 2021, during his first day in office, US President Joseph Biden canceled the Keystone XL pipeline project that carries petroleum from the oil sands of Alberta, Canada, to Steele City, Nebraska, and beyond to the Cushing, Oklahoma NYMEX delivery point. With a majority in both the House of Representatives, and US Senate, and progressive Democrats insisting on a green path for US energy production and consumption, US energy policy is undergoing a substantial change.

Increased regulations on extracting fossil fuels from the earth’s crust and processing them into the energy that powers cars, planes, trucks, and other forms of transportation will decrease US output. In March 2020, the US led the world with 13.1 million barrels of crude oil per day flowing from production sites. According to the Energy Information Administration, the output declined to 10.9 million bpd for the week ending on Mar. 19. The 16.8% drop in production could increase as US energy policy shifts to a greener path that encourages alternative sources.

Meanwhile, OPEC and Russia have suffered from increasing US crude oil production over the past years. Shale output and a “drill-baby-drill” policy under the previous administration caused US output to surpass Saudi and Russian daily production levels.

OPEC+’s mission is to achieve the highest possible return for its members. The Saudi oil minister recently said, “drill-baby-drill is gone forever.”

As the US policy passes the pricing power back to the international oil cartel and Russia, the potential for far higher prices is rising. As energy demand returns, the most recent price correction in the crude oil futures market could be the perfect opportunity to load up on the energy commodity.

We are now heading into the peak season for demand in the United States. As vaccines go into millions of arms each day, people will return to work. They will travel, and this summer, long-overdue vacations on planes and in cars are likely to push gasoline and distillate demand to the highest level in years.

The price action in the gasoline futures market is a sign of the coming demand tsunami.

The weekly chart of NYMEX gasoline futures shows what a difference a year can make. In March 2020, gasoline prices fell to a low of 37.60 cents per gallon wholesale, the lowest level of this century since 1999. In March 2021, nearby gasoline prices peaked at $2.1700 per gallon in mid-March. The recent correction took the gasoline price to just below the $2 level on Mar. 29, but it remains over five times higher than at the low in March 2020.

Buying the dip in crude oil for the coming months

The crude oil and gasoline markets may have gotten a bit overdone at the recent highs on Mar. 8, but a consolidation period and return of demand with falling US output is a prescription for higher prices and a continuation of the bullish trend.

In April 2020, NYMEX crude oil futures fell below zero and Brent futures to the lowest price of this century. A combination of rising demand, a decline in US output, and OPEC+’s rising control of prices could mean higher energy prices are on the horizon. Supply and demand fundamentals favor taking advantage of the recent dip in the oil and oil product markets as a buying opportunity.

Crude oil may have hit a speedbump on its path to new highs over the coming weeks and months.