Wall Street’s fourth quarter earnings season kicks off this week, with JPMorgan Chase (NYSE:), Citigroup (NYSE:), and Wells Fargo (NYSE:) all set to report their latest financial results before the US open on Friday, Jan. 15.

FactSet data shows analysts anticipate Q4 earnings will fall by 8.8% when compared to the same period last year, mainly due to the ongoing negative impact of the COVID-19 pandemic.

If confirmed, Q4 2020 would mark the third-largest, year-over-year (YoY) decline in earnings reported by the index since the third quarter of 2009, trailing only the first and second quarters of this year. It will also be the seventh time in the past eight quarters in which the index has reported a YoY drop in earnings.

Seven sectors are projected to report a YoY decline in earnings, led by the Energy, Industrials, and Consumer Discretionary sectors. On the other hand, four, led by Materials and Health Care, are predicted to report annualized earnings growth. 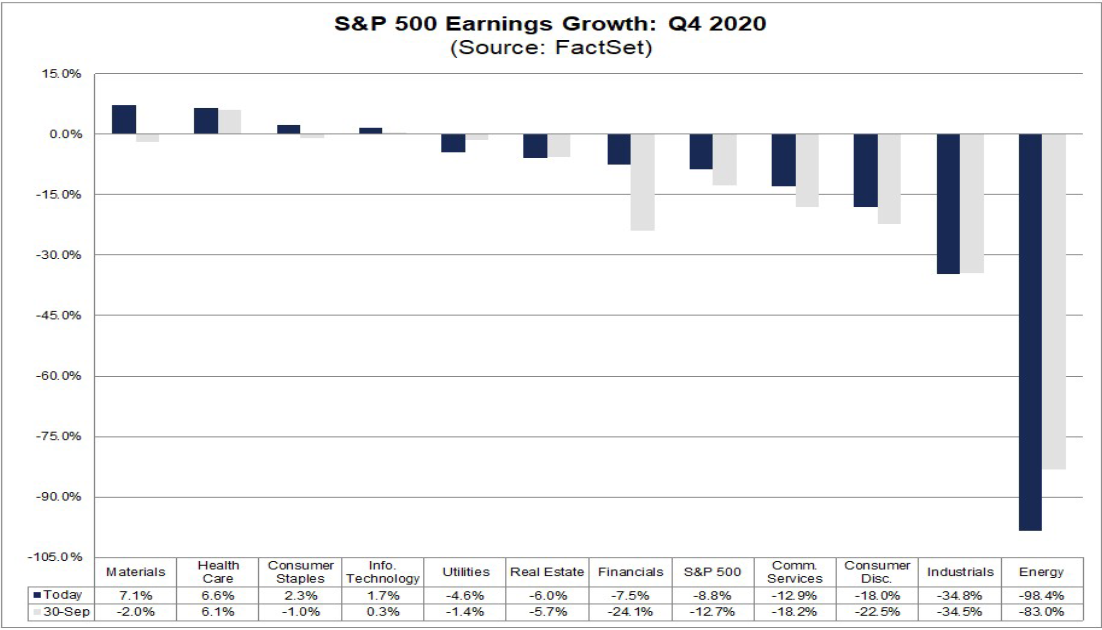 Revenue expectations are slightly more encouraging. Sales growth is predicted to grow 0.4% from a year-ago. If confirmed, it will mark the first time the index has reported YoY revenue growth since Q1 2020.

Six of the 11 sectors are anticipated to report a YoY increase in revenue, led by the Health Care sector. In contrast, five are predicted to report an annualized drop in sales growth, led, once again, by the Energy and Industrials sectors. 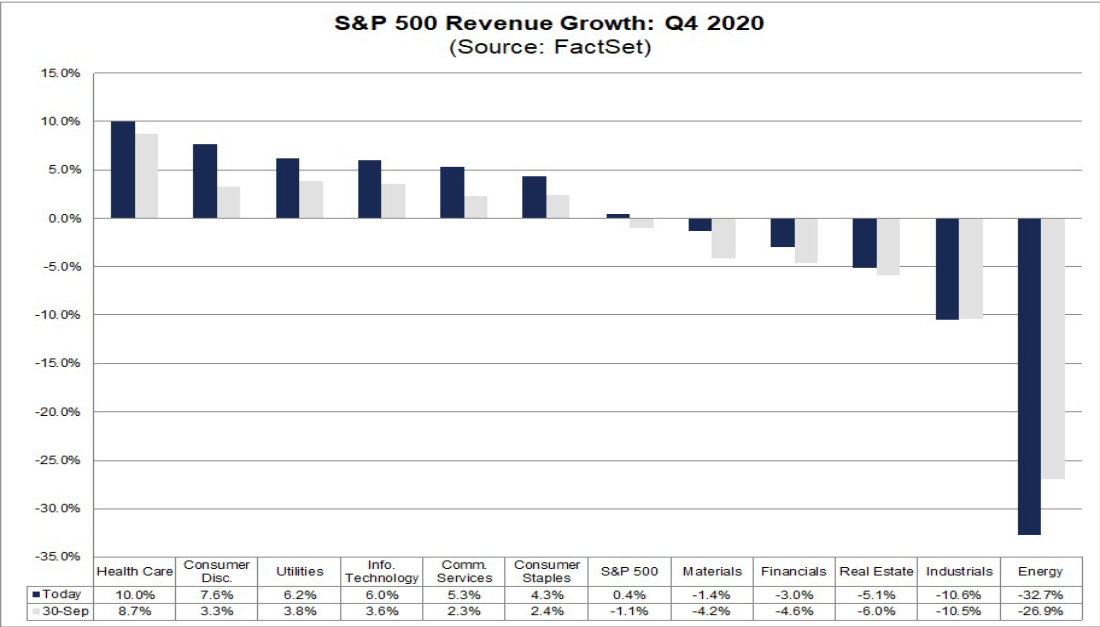 Below we break down two sectors whose financial results are expected to take the deepest dive and one sector where earnings are projected to show relative strength.

The Energy sector is forecast to print the biggest YoY earnings drop of all eleven sectors, with FacSet forecasting a staggering 98.4% plunge in fourth-quarter EPS forecast from a year earlier.

The other notable name set to suffer a substantial reduction in its Q4 earnings is Chevron (NYSE:), which is projected to record earnings of $0.07 per share, much lower than EPS of $1.24 in the same period a year earlier.

Indeed, the Energy Select Sector SPDR® Fund (NYSE:)—which tracks a market-cap-weighted index of US energy companies in the S&P 500—is down 27% over the past 12 months, compared to the S&P 500’s nearly 16% gain over the same timeframe.

Beyond the Big Oil stocks like Exxon (NYSE:) and Chevron, some of its largest holdings include Schlumberger (NYSE:), EOG Resources (NYSE:), Marathon Petroleum (NYSE:), and Kinder Morgan (NYSE:).

Industrials are projected to report the second highest YoY earnings slump of all eleven sectors, at -34.8%.

Of the twelve industries in the sector, five are expected to report a double-digit decline in earnings: Airlines (-347%), Industrial Conglomerates (-21%), Trading Companies & Distributors (-13%), Electrical Equipment (-11%), and Building Products (-10%).

The Industrials sector is also anticipated to report the second largest YoY revenue decline, a drop of 10.6%. The airline industry is once again forecast to be the largest contributor to the YoY decline in revenue, at -66%, as it continues to deal with the negative impact of the ongoing coronavirus health crisis.

Not surprisingly, the US airline industry has the broader market over the past 12 months, with the sector’s main exchange traded fund—the US Global Jets ETF (NYSE:)—down roughly 29% YoY.

The Health Care sector is set to enjoy tailwinds from the race to deliver successful COVID-19 vaccines and treatments, as it is expected to report the second-highest YoY earnings growth of all eleven sectors. EPS is projected to rise 6.6% compared to a year earlier.

Five of the six sub-industries in the sector are forecast to post higher earnings than a year ago. The Biotechnology sector is expecting a double-digit increase of 15%. Growth in EPS for the quarter is also expected from the Pharmaceuticals segment, with earnings set to rise nearly 13% YoY.

The sector is also forecast to report the highest YoY revenue growth of all eleven sectors, at +10.0%. Five of the six sub-industries in the sector are expected to report growth in revenues, led by double-digit gains in the Life Sciences Tools & Services group (+22%) and Biotechnology (+20%).

The Health Care Select Sector SPDR® Fund (NYSE:), the sector’s main ETF, is trading near all-time highs and is up almost 14% over the past 12 months.

Even more impressive, the iShares Nasdaq Biotechnology ETF (NASDAQ:)—which tracks the top biotechnology and pharmaceutical companies listed on the —has rallied more than 31% over the past year.

At a company level, Moderna (NASDAQ:) and Abbott Laboratories (NYSE:) are two to watch. MRNA, which developed a vaccine to COVID-19, is forecast to record revenue of $293.2 million, an increase of nearly 2,000% compared to $14.1 million a year-ago, while ABT is expecting to report revenue of $9.94 billion, beating last year’s $8.31 billion reading.