The article was written exclusively for Investing.com

Investors are starting to get nervous about inflation rates picking up, and who can blame them. The latest data from the prices paid indexes showed a significant uptick in costs—to their highest levels in years. Additionally, prices for commodities such as and have exploded higher from their spring 2020 lows. This has sent bond yield surging and put the stock market on shaky ground.

Whether inflation is here to stay over the long-term is hotly debated. Still, there are plenty of signs suggesting that a spike in many of these key inflation indexes will only be temporary. Oil prices were so low last spring that the commodity owner quite literally had to pay someone to take it off their hands, trading to around negative $40 per barrel.

Not As Bad As It Seems

These low prices weren’t just in oil; industrial metals such as copper traded for around $2, and now the metal trades at almost $4. There are many reasons why prices fell so sharply and have now rebounded massively; from supply constraints to global demand accelerating, it makes no difference. However, the year-over-year metrics will make it seem as if prices rose dramatically, and they really haven’t. It means that the bond market could be getting itself all worried for no reason.

As the spring of 2020 prices begins to drop off the comparables, the pace of inflation should start to normalize and return to a rate seen before the pandemic. Oil prices, for example, are precisely at the same price they were in at the beginning of January 2020. Meanwhile, appears to be trading around the same prices seen throughout most of 2017 and 2018. prices have returned to their summer of 2019 levels.

Readings in the and are likely to move sharply higher in the months ahead. That is because many commodities, like oil, are positively correlated to the index. It seems entirely possible that over the next few months, the PPI and CPI readings will climb dramatically on a year-over-year or month-over-month basis. But those sharp changes should begin to normalize by some time in the summer of 2021 and start to decline over time. Many commodities settled down during the summer of 2020, and their rate of change began to slow. 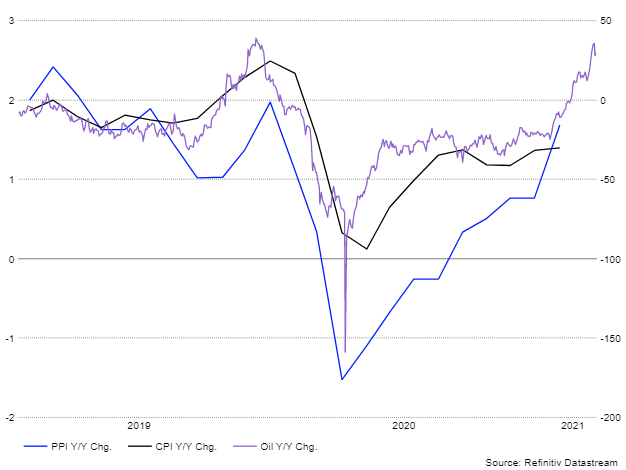 Have We Seen This Show Before?

Something similar happened following the 2008 recession when prices fell sharply. Then as the economy recovered, prices for commodities began to rise. This sent the consumer price index sharply higher until September 2011, when it peaked at a year-over-year change of 3.9%. The CPI has declined ever since and has yet to rise back to 3%, let alone 3.9%.

Perhaps this time will be different. In the 2008 recession, the CPI turned negative from May of 2009 until October of 2009. It is impossible to know for sure, but the key may be to follow some commodities. If those prices begin to flatten out, then it likely means that inflation rates will flatten out. Many people will point to rising levels of M2 as a sure sign inflation will come. But money printing alone does not produce inflation; there needs to be an increase in demand.

It might mean the bond market is all worried for no reason. Who knows, it could even create an incredible buying opportunity for stocks.