Portfolio managers say that inflation has replaced the coronavirus as the primary risk for Wall Street, according to a survey released by Bank of America as reported by CNN Business on Tuesday (Mar. 16). That may be understating the continuing, if receding, threat from the pandemic in the months ahead.

Nonetheless, it’s highly likely that the inflation trend will rise as last year’s temporary bout of deflation, triggered by the initial coronavirus shock, washes out of the year-over-year data. The question is what happens beyond the initial rebound?

The future, as always, is uncertain, but in the near term it’s likely that we’ll see the annual rate of inflation revive. This is less about forecasting firmer pricing pressure vs. recognizing that the deflation last spring was always a fleeting affair.

Consider how the rolling one-year change in the US Consumer Price Index (on a headline basis) compares in recent history. As the chart below shows, the pandemic’s start took a dramatic bite out of the pricing trend, briefly cutting the annual rate of inflation to nearly zero. On a monthly basis, CPI was negative for three months—March, April, and May. 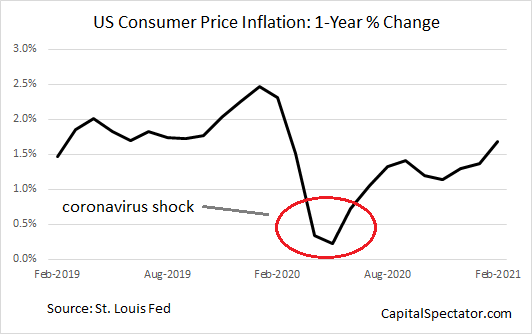 In subsequent months, as the economy recovered, inflation revived. In last week’s February update, rose 1.7% over the past year—the highest in a year, although still below the Federal’s 2.0% inflation target.

As last year’s three-month run of monthly deflation falls out of the rolling one-year numbers, the inflation trend will rise—even if monthly CPI is flat.

Consider three forecasts for comparison. One assumes that CPI’s monthly change will be zero for the next four months (March through June). A second forecast assumes a 0.1% monthly inflation rate, and a third is a 0.2% forecast. (The average monthly CPI change over the past year is roughly 0.1%.) Translating all three estimates into annual CPI changes shows a clear trend: higher inflation trend in the immediate future. 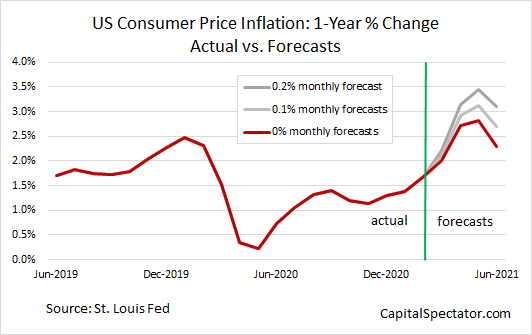 At the high end, annual inflation will reach nearly 3.5% in May. Compared with recent history, that’s a dramatic increase. Note, too, that all three forecasts show the revival in annual inflation peaking in May and turning lower in June. That’s a clue for wondering if the near-term rebound in inflation has legs.

The crucial question: Will the upcoming bounce fade and return to the low-flation trend that prevailed before the pandemic?

Some forecasters predict that the $1.9 trillion stimulus/relief package that was approved in Washington last week will soon trigger higher, sustainable inflation rates. The pushback is that the forces that have been driving inflation lower in recent decades (aging workforce, new technologies, etc.) aren’t going away and so inflation, beyond the near-term bump, will likely stay moderate.

This much is clear: the higher inflation numbers over the next several months will be noise for deciding if higher, sustainable inflation is coming—or not. The key test will be how CPI and other inflation metrics fare in the second half of 2021.

Meantime, brace yourself for substantially higher annual inflation rates over the next several months.