This week’s calendar appears very light, with the only releases worth mentioning being the US CPIs for December and the UK’s monthly for November. Although the US CPI is expected to have risen somewhat, we doubt that this would be enough to reduce chances for further easing by the FOMC. As for the UK GDP, we cannot rule out a slide as this was the period when the UK went back into lockdown. This may raise speculation for more QE by the BoE.

There are no major economic releases on the agenda for Monday and Tuesday. We only got China’s and for December during the Asian morning today. The CPI rate rebounded to +0.2% yoy from -0.5%, while the PPI one has risen to -0.4% yoy from -1.5%.

On Wednesday, the main item on the agenda may be the US CPIs for December. The rate is forecast to have ticked up to +1.3% yoy from +1.2%, while the one is anticipated to have held steady at +1.6% yoy. 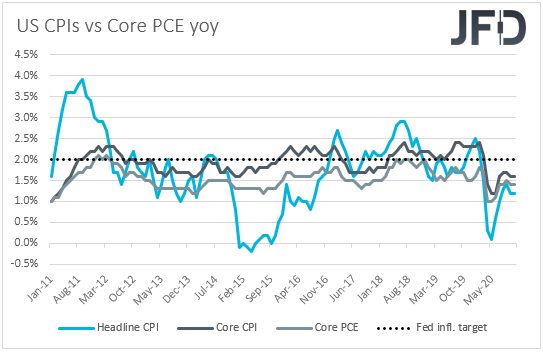 Last week, it was all about the runoff elections in the US state of Georgia, with Democrats winning both seats, something that sparked speculation for more fiscal stimulus and infrastructure spending in the US under Joseph Biden’s Presidency. Equities and other risk-linked assets continued to march north, with Wall Street’s three main indices hitting fresh record highs, while safe-havens remained relatively weak. On top of that, on Friday, for December fell 140k, recording their first drop since April, something that may have increased speculation for more monetary-policy support by the Fed in the months to come. Remember that the minutes from the latest FOMC gathering revealed that some members noted that they could consider further adjustments to their QE purchases, such as increasing the pace of purchases, or weighting them towards longer maturities.

In our view, a rising headline CPI is unlikely to decrease the chances for the Fed to expand its stimulative efforts. After all, the Committee wants inflation to rise above 2% for some time, so that it averages 2% over time. Thus, with both headline and core rates below the 2% mark, even an upside surprise may not be enough to change the dollar’s faith. Yes, the currency could rebound at the time of the release, but we don’t expect this to last for long. Eventually, it may come back under selling interest on hopes of more stimulus by the US government, as well as by the FOMC.
On Thursday, the only data release worth mentioning is China’s trade balance for December, due to be released during the Asian session.  The nation’s surplus is forecast to have declined somewhat, to USD 72.35bn from USD 75.40bn. Exports are expected to have slowed to +15.0% yoy from +21.1%, while imports are anticipated to have accelerated somewhat, to +5.0% yoy from +4.5%.
We also have a speech by Fed Chair Jerome Powell, from whom we may get more insights with regards to whether the Fed is indeed ready to deliver more in order to support an economy hurt by the coronavirus pandemic.
Finally, on Friday, we have the UK’s monthly GDP for November, alongside the industrial and manufacturing production, as well as the trade balance for the month. No forecast is available for the GDP, while industrial and manufacturing productions are forecast to have slowed to +0.4% mom and +1.0% mom, from +1.3% and +1.7% respectively. Bearing in mind that November was the month when the UK went back into lockdown, a slowdown in industrial and manufacturing production will not come as a surprise to us. Even a negative GDP print may be possible. As for the trade balance, the nation’s deficit is expected to have narrowed somewhat, to GBP 10.88bn from GBP 12.00bn. 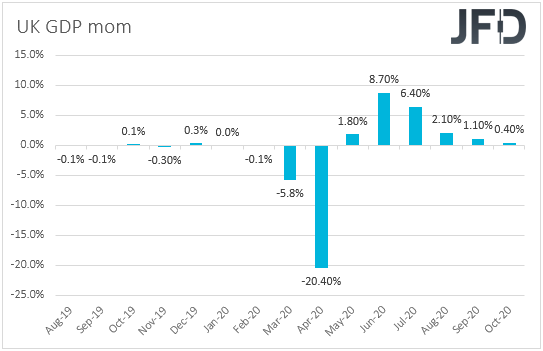 On December 24th, the EU and the UK reached a last-minute accord on their trade relationship, but talks are far from over. Financial services were not included in the initial deal and thus, future talks will now focus on the UK’s access to the EU’s financial world. In any case, for the moment though, the Brexit saga appeared to have taken the back seat, with investors paying attention to how the vaccinations proceed and perhaps on how the new restrictions will affect the UK economy. At its latest meeting, the BoE stood pat, but reiterated that it remains ready to increase its QE purchases pace should market functioning worsens. Thus, a negative surprise in the aforementioned data set may increase speculation on that front, which could thereby hurt the British pound, especially against currencies which we expect to continue performing well, like the risk-linked and .
As for the rest of Friday’s releases, Eurozone’s trade balance for November is coming out, but no forecast is currently available. From the US, we get the New York Empire state manufacturing index for January, which is forecast to have risen to 6.00 from 4.90, the industrial production for December, which is expected to have grown 0.4% mom, the same pace as in November, and the retail sales for December. Headline sales are forecast to have slid 0.2% mom after falling 1.1% in November, while the core rate is anticipated to have risen to -0.1% mom from -0.9%. The preliminary UoM consumer sentiment index for January is also due to be released and expectations are for a fractional decline, to 80.0 from 80.7.