We have only one central bank deciding on monetary policy this week and this is the . Following dovish remarks by Deputy Governor , it would be interesting to see whether the Bank will decide to ease its policy further at this gathering.

We also get the minutes of the latest and meetings, from which we may get hints with regards to those Banks’ future policy plans. The Canadian for September is also due to be released.

On Monday, the calendar appears relatively light. We get the final services and composite PMIs for September from the , the , and the , but as it is the case most of the times, expectations are for the final prints to confirm the preliminary estimates. From the US, we also get the for the month, which is forecast to have declined somewhat, to 56.3 from 56.9.

On Tuesday, during the Asian morning, the RBA announces its . At its previous meeting, the Bank decided to maintain the targets for the cash rate and the yield on 3-year Government bonds at 0.25%, but also increased the size of its Term Funding Facility, in order to make it easier for banks to access more funds for longer.

Officials reiterated that the downturn due to the coronavirus is not as severe as earlier expected, but underlined that the recovery is likely to be both uneven and bumpy, adding that they remain willing to expand their stimulative efforts if deemed necessary.

Since then, the only top tier economic release we got was the nation’s employment report for August. The unemployment rate declined to 6.8% from 7.5%, while the net change in employment revealed that the economy added 111.0k jobs, instead of losing 50k as the forecast suggested. Combined with the fact that the RBA has eased its policy at the prior meeting, this, seen in isolation, suggests that officials may refrain from acting again at this one.

However, a couple of weeks ago, RBA Deputy Governor Guy Debelle flagged the prospect of more easing, with options including currency market intervention and negative interest rates. According to the ASX 30-day interbank cash rate futures implied yield curve, there is a 54% chance for interest rates to be cut to zero at this meeting. 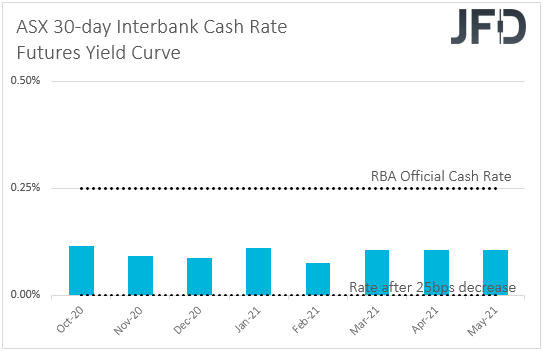 Something like that may prove negative for the , but given that more than 50% of the action is already priced in, we would expect the slide to stay limited. For the Aussie to tumble aggressively, the Bank may have to cut rates and signal that more decreases are on the way.

Now, in case officials refrain from pushing the cut button, the Aussie may experience a relief bounce. The focus will then turn to any signals with regards to any cut at one of the upcoming meetings. If there are no clear hints with regards to that, the currency is likely to continue strengthening for a while more.

Overall though, we believe that the currency’s broader path is likely to stay dependent on developments surrounding the broader market sentiment.

As for Tuesday’s economic indicators, during the Asian morning, apart from the RBA decision, we also get Australia’s for August, with the nation’s surplus expected to have increased to AUD 5.154bn from 4.607bn.

During the European session, the for September is coming out, and the forecast points to a small decrease, to 54.1 from 54.6. Later in the day, we get the US and Canadian trade balances for August. Both the US and Canadian deficits are expected to have widened somewhat.

On Wednesday, the main item on the agenda may be the minutes from the latest FOMC gathering. At that meeting, the Committee kept its policy unchanged, but changed its inflation language noting that they “will aim to achieve inflation moderately above 2% for some time so that inflation averages 2% over time”.

With regards, to the new economic projections, officials revised up their GDP and inflation forecasts, and downgraded the unemployment rate ones, while the new dot plot suggested that interest rates are likely to stay at present levels at least through 2023. That said, looking at the details, we see that one member was in favor of a hike in 2022, and four saw rates higher in 2023.

Combined with the inflation forecast of 2023, which is at 2%, this shows that some members may not be willing to tolerate inflation above target for long as pointed in the decision statement. Thus, we will dig into the minutes to see whether this is the case or not.

If the minutes reveal that there are several members against tolerating inflation above 2% for some time, equities and risk-linked assets are likely to come under selling interest, while safe-havens are likely to gain. The opposite may be true in case the minutes reveal that the decision was unanimous, something we see as the least likely scenario based on the dot plot. 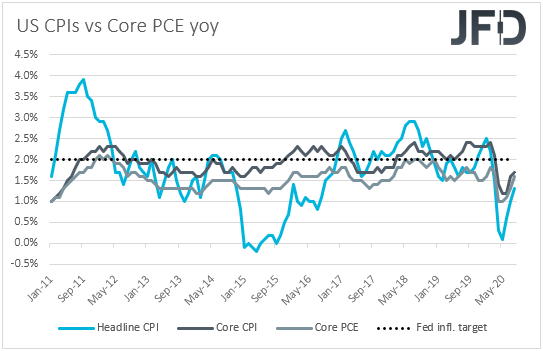 As for Wednesday’s data, the only release worth mentioning is Canada’s for September, but no forecast is currently available.

On Thursday, we get more minutes, this time from the . At the prior ECB meeting, policymakers kept monetary policy untouched, reiterating that they stand ready to adjust all their instruments, as appropriate, to ensure that inflation moves towards its aim in a sustained manner.

Bearing in mind that the preliminary PMIs and CPIs for September disappointed, we will scan the minutes for clues as to how willing officials are to ease their policy further in the months to come. 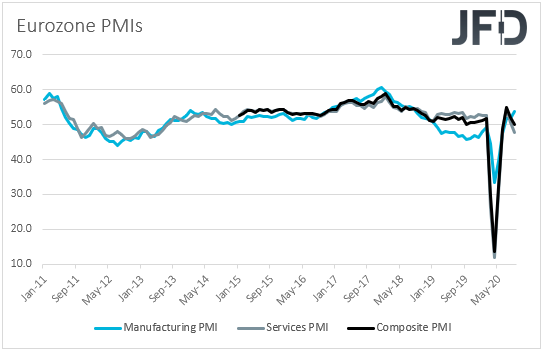 With regards to the economic indicators, during the Asian session, we have China’s for September, for which no forecast is currently available, while during the EU trading, Germany’s for August is due to be released. Expectations are for the nation’s surplus to have increased slightly.

Finally, on Friday, during the Asian session, Japan’s final for Q2 is coming out, but no forecast is available. The second estimate was at -7.9% qoq, and thus, we see the case for the final print to be close to that number. The nation’s household spending for August is also coming out and it is expected to have rebounded 3.2% mom after sliding 6.5% in July.

During the early European session, UK’s monthly GDP for August is coming out, alongside the industrial and manufacturing production rates, and the trade balance for the same month. No forecast is available for the GDP, while the IP and MP yoy rates are forecast to have increased to -4.6% and -5.9% from -7.8% and -9.4%. The nation’s trade deficit is expected to have widened somewhat. 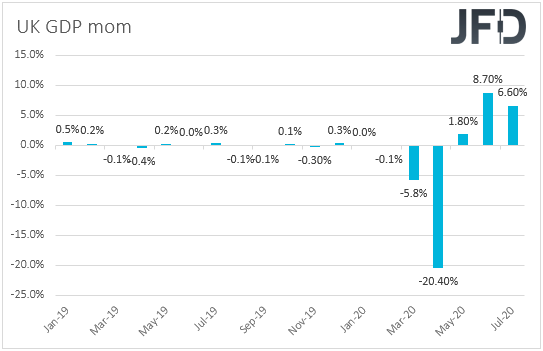 Having said that though, we expect the British to react little on these releases. We believe that the currency will stay mostly linked to politics, and especially developments surrounding the Brexit landscape.

Last Thursday, the pound tumbled following headlines that the EU and the UK failed to close their differences-gap in the latest round of trade talks, and that the EU began legal proceedings over the UK’s plan to override key elements of the withdrawal agreement. However, it rebounded on Friday, after German Chancellor Angela Merkel said that she remains optimistic that a deal in the EU-UK post-Brexit relationship is still possible before year-end.

What’s more, EU chief Brexit negotiator Michel Barnier suggested that talks could continue up until the end of the month, even though the two sides have set a mid-October deadline for reaching common ground. Thus, GBP-traders are likely to focus more on whether there will be more talks and whether we will see some progress in the next few weeks.

From Canada, we have the employment report for September. The unemployment rate is forecast to have declined to 9.8% from 10.2%, while the net change in employment is expected to show that the economy added 153.3k jobs, less than August’s 245.8k, but still much more than the pre-covid monthly numbers. 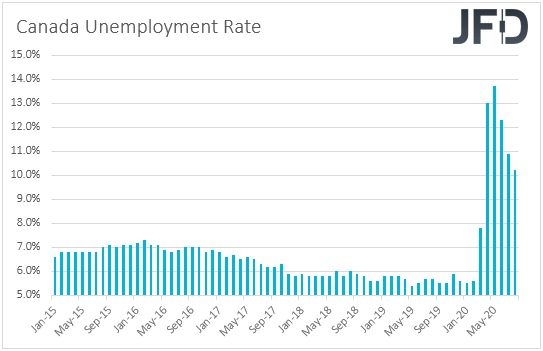 At its prior gathering, the BoC kept interest rates unchanged at +0.25%, repeating that they will stay there until the 2% inflation target is sustainably achieved. They also reiterated the view that they will continue with their QE program until the economic recovery is well underway, and that they stand ready to adjust their programs if market conditions change.

They said that both the global and Canadian economies are evolving broadly in line with the scenario outlined in July, but added that the bounce-back in activity in the third quarter looks to be faster than anticipated in July. With all that in mind, and also taking into account that the core and common CPIs for August accelerated somewhat, a decent employment report may allow BoC policymakers to continue sitting comfortably on the sidelines for a while more.