This week starts with the OPEC+ meeting, where major oil producing nations will decide whether to extend the existing cuts, or increase output production. We also have an RBA on Tuesday, but we don’t expect any action. On Tuesday and Wednesday, Fed Chair and Treasury Secretary will testify before Congress, while on Friday, the US for November are due to be released.

On Monday, the main event on the agenda may be the between major OPEC and non-OPEC oil producers, known as the OPEC+ group. Following the positive developments around a potential coronavirus vaccine, oil prices have decently gained, and it would be interesting to see whether members will be willing to increase output, or keep the existing cuts in place.

The group had been expected to increase oil production by 2mn barrels per day, from January, but according to media chatter, it is now expected to delay those plans for at least three months. So, what does this mean for oil prices? A three-month extension is unlikely to rock the boat and thus, we don’t expect any major market reaction. Now in case the extension is six months or more, oil prices are likely to gain, while in case we do get an output increase, we may see a setback.

As for the data, the only set worth mentioning is Germany’s preliminary CPIs for November. The rate is expected to have ticked up to -0.1% yoy from -0.2%, but the one is anticipated to have stayed at -0.5%. This is likely to raise speculation that Eurozone’s headline print, due out on Tuesday, may stay relatively steady as well.

On Tuesday, during the Asian morning, the RBA announces its . Last month, this Bank cut interest rates to 0.10% from 0.25% as was widely expected, and decided to extend its government bond buying program by AUD 100bn to buy bonds of 5 to 10 years maturity. Governor said that a negative rate is “extremely unlikely”, something confirmed by the minutes of that meeting, which also revealed that if more is needed, officials will focus on bond purchases.

However, given last time’s bold action, we don’t expect any further QE expansion at this gathering. We believe that officials are likely to stand pat and wait for more data to come in before they decide whether more is needed or not. That said, we will dig into the statement to see how willing they are to expand their stimulative efforts if Australia’s economic outlook suggests so. 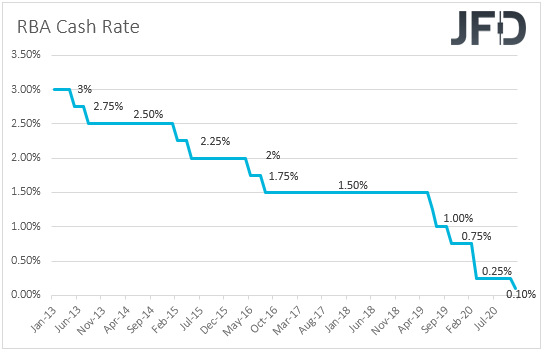 From the Eurozone, we get the preliminary inflation data for November. The rate is forecast to have ticked up to -0.2% from -0.3%, while the print is expected to have stayed unchanged at +0.4%. At its latest meeting, the ECB noted that in December, the new macroeconomic projections will allow a thorough reassessment of the economic outlook and that the Governing Council will recalibrate its instruments as appropriate. In other words, the ECB is very likely to expand its stimulative efforts at the upcoming gathering, and subdued inflation metrics will only add to that likelihood. 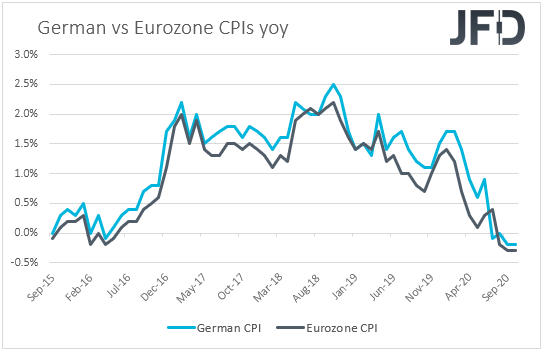 Later in the day, Fed Chair Jerome Powell and Treasury Secretary Steven Mnuchin are scheduled to testify before Congress. They will appear before the Senate Banking Committee on Tuesday, while on Wednesday, before the House of Financial Services Committee. They will testify on the CARES Act, under which Congress made USD 2 trillion available to the Treasury as a coronavirus aid, a large portion of which was aimed to support the FOMC’s lending programs. Less than a couple of weeks ago, Mnuchin cut off the programs, requesting the Fed to return unused funds and declined any extension. With all that in mind, it will be interesting to see what the two officials have to say on the matter, and whether Powell will hint at other ways in stimulating the US economy from a monetary policy front.

In Canada, the nation’s GDP data for September and are due to be released. Following a tumble to -38.7%, the qoq annualized rate is forecast to have rebounded to 47.0%, though the mom rate for September is anticipated to have slid to +0.9% from +1.2%.  At its latest meeting, the BoC kept interest rates unchanged and scaled back its QE program, noting that the economic outlook has evolved largely as anticipated in the July Monetary Policy Report. Thus, following the acceleration in Canada’s CPIs for October, a small slide in September’s GDP and a relatively decent for November, due out on Friday, are unlikely to raise speculation for BoC officials reversing their decision at the upcoming gathering, namely expanding their QE purchases. 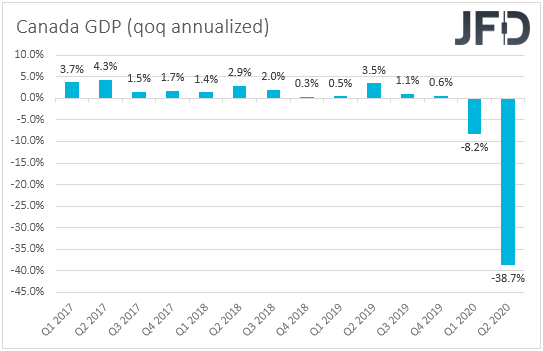 From the US, the most important item on the agenda may be the ISM for November, which is expected to have slid to 57.9 from 59.3.

On Wednesday, Asian trading, Australia’s GDP for is due to be released. In qoq terms, economic output is expected to have rebounded 2.5% after tumbling 7.0% in Q2, something that would take the yoy rat higher, to -4.5% from -6.3%.

In the US, besides the second round of Powell’s and Mnuchin’s testimony, we also have the ADP employment for November. The private sector is forecast to have gained 400k jobs, after adding 365k in October. This could raise speculation that the NFP print, due out on Friday, may also exceed October’s number, which was at 638k. That said, as we noted several times in the past, the ADP print is far from a reliable predictor of where the NFPs may come in. Even last month, when the ADP slowed to around half (to 365k from 749k), NFPs stayed close to their September figure (638k  vs 672k). 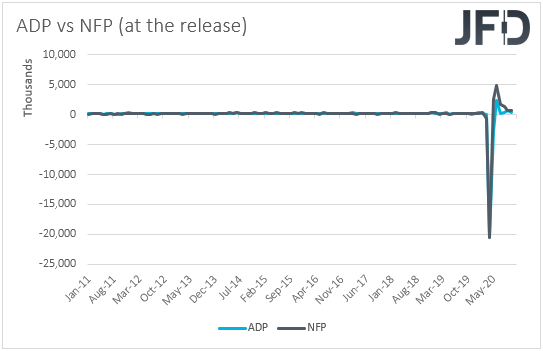 Thursday appears to be a relatively light day, with the most noteworthy releases on the schedule, being Eurozone’s for October and in the US, the ISM non-manufacturing for November. Eurozone retail sales are forecast to have rebounded 0.8% mom after falling 2.0%, while the ISM index is anticipated to have slid somewhat, to 56.0 from 56.6.

On Friday, during the Asian trading, Australia’s for October are due to be released. On a mom basis, they are expected to have rebounded 1.6% after sliding 1.1%, something which combined with a potential rebound in economic activity for Q3 may allow RBA policymakers to stay sidelined for a while longer.

Later in the day, the main release may be the official US employment report for November. Nonfarm payrolls are expected to have slowed to 500k from 638k in October, while the unemployment rate is expected to have ticked down to 6.8% from 6.9%. As for wages, average hourly earnings are anticipated to have slowed to 4.2% yoy from 4.5%. In our view, this is a relatively decent data set, but with the US government and Congress failing to reach consensus over a coronavirus fiscal aid, it is unlikely to drastically reduce chances for the Fed to step up its stimulus efforts at some point in the not-too-distant future. 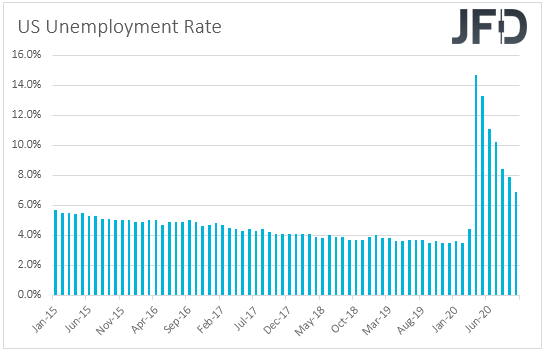 Canada’s employment report for November is also due to be released. The unemloyment is forecast to have held steady at 8.9%, while the net change in employment is forecast to show that the economy has gained 27.5k jobs, less than October’s 83.6k. Although a somewhat softer than previously report, as we already noted, it is unlikely to raise speculation for BoC expanding their stimulative efforts again, especially after scaling back their QE purchases at their prior gathering.