We have a very busy week ahead of us, with four central banks deciding on monetary policy: The , the , the and the . The only Bank expected to act is the Fed and thus, with regards to the others, we will just scan the statements for hints on how they plan to move forward.

Following the decision of the EU and the UK to extend Brexit talks, we will also keep our gaze locked on headlines surrounding that front.

On Monday, during the Asian session, we already got Japan’s Tankan survey for Q4, with both the and indices rising by more than expected.

The rest of the day appears relatively light in terms of economic data releases. The only one worth mentioning is Eurozone’s for October, which is expected to have rebounded 2.0% mom after sliding 0.4% in September.

On Tuesday, Asian time, the RBA releases the from the monetary policy meeting held at the beginning of the month. Officials stood pat and repeated that they are prepared to do more if necessary. With Governor Lowe noting at the November meeting that a negative rate is “extremely unlikely”, we believe that if any new easing is needed, this will come in the form of QE expansion.

That said, with the Bank noting that the Australian economic recovery is underway, and that recent data have generally been better than expected, we don’t see the case for further action any time soon. We will scan the minutes to see whether officials are indeed more likely to stay sidelined in the months to come, or whether they are considering to act at one of the upcoming gatherings. 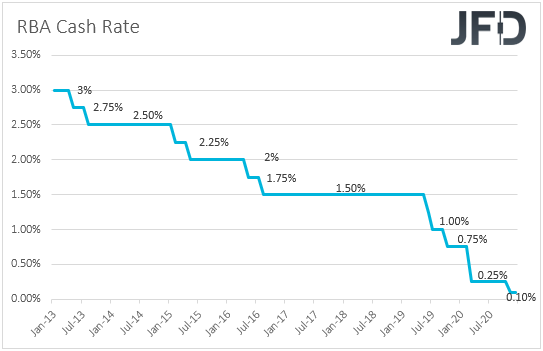 With the EU and the UK deciding to extend their talks over a potential trade accord, we don’t expect GBP traders to pay much attention to UK data, rather than to headlines surrounding the negotiations. Anything suggesting that the two sides find it hard to bridge their differences, may push the lower, while for the currency to gain more, headlines that some sort of consensus is reached are needed.

Later in the day, we have Canada’s and the US , both for November. Canada’s housing starts are expected to have held relatively steady, while the US IP is anticipated to have slowed to +0.3% mom from +1.1%.

On Wednesday, the FOMC ends its two-day monetary policy meeting and will announce its decision. The Committee’s last meeting proved to be a non-event as it took place in the midst of the US elections. Officials just decided to keep their monetary policy settings unchanged and maintained their pledge to do whatever they can to support their coronavirus-hit economy. 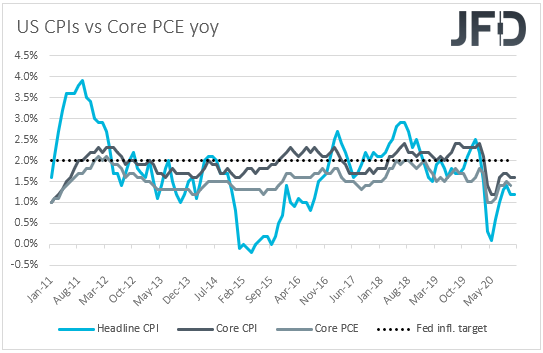 With the virus still spreading fast, inflation running well below the 2% objective, and the Congress yet to agree on a new coronavirus-aid bill, officials are more likely than not to expand their stimulative efforts at this gathering. Market chatter suggests that policymakers are expected to increase purchases of longer-dated Treasuries in order to contain a rise in yields. Thus, if they just do that, the market is unlikely to move much. For equities and other risk-linked assets to gain, officials have to expand their easing efforts and signal that more may be in the works.

As for Wednesday’s data, during the early European session, we get the UK CPIs for November, but as we already noted, we don’t expect the pound to react to UK data releases, as its traders are likely to keep their gaze locked to developments surrounding the Brexit landscape.

Then we get the preliminary Markit manufacturing and services PMIs for December from the Euro area, the UK and the US. Both Eurozone’s and indices are expected to have declined to 53.0 and 41.0 from 53.8 and 41.7 respectively, but strangely the composite index is forecast to have risen to 45.6 from 45.3. No forecasts are available for the UK data, while in the US, expectations are for declines as well.

From the US, we also get retail sales for November, with expectations pointing to a 0.3% mom slide, after a 0.3% increase in October. Canada’s CPIs for the same month are also due to be released. The rate is forecast to have ticked up to +0.8% yoy from +0.7%, while no forecast is available for the core rate.

On Thursday, the central bank torch will be passed to the SNB and the BoE. Kicking off with the SNB, when they last met, policymakers of this Bank kept their policy untouched, reiterating that the Swiss franc is highly valued and that they remain ready to step up FX-market interventions when deemed necessary. Since then, the has gained notably against the US dollar, but stayed relatively unchanged against the euro. In our view, bearing in mind that SNB pays more attention to the exchange rate, officials are unlikely to strengthen their intervention language. We believe that they will keep their policy unchanged and that the statement will be more or less a repetition of the previous one.

Now passing the ball to the BoE, we don’t expect any action here either. At its prior gathering, the BoE decided to keep interest rates unchanged at 0.10%, but expanded its asset purchase program by more than initially expected. In the statement accompanying the decision, officials noted that the outlook for the economy remains unusually uncertain and that they stand ready to increase QE again if market functioning worsens. 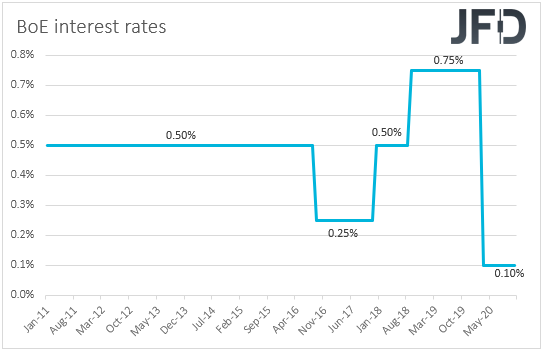 Although officials of this Bank are ready to deliver more, we don’t expect this to happen now. Over the weekend, EU and UK Brexit negotiators agreed to extend talks over a potential trade agreement, something that increased hopes that an accord could eventually be reached. Therefore, we believe that the central bank will wait for the final outcome before deciding whether and how to act. A trade accord may allow policymakers to stay sidelined for a while more, while a no-deal Brexit may force them to cut rates into the negative territory for the first time in the Bank’s history. For now, as we already noted, the pound is likely to stay sensitive to headlines surrounding the negotiations.

With regards to Thursday’s economic releases, during the Asian trading, we get New Zealand’s GDP for Q3 and Australia’s employment report for November. New Zealand’s is expected to have rebounded 13.5% qoq after sliding 12.2% in Q2, something that will drive the yoy rate up to -1.3% fro -12.4%.

At its latest monetary policy meeting, the RBNZ kept its official cash rate and Large-Scale Asset Purchase program unchanged, and although it noted that it will launch a funding for lending program in December, Governor Adrian Orr said that domestic activity since August has been more resilient than previously assumed, which means that the chance for adopting negative interest rates may have eased. In our view, a decent rebound in economic activity may diminish the likelihood of negative rates even further.

In Australia, the is forecast to have held steady at 7.0%, while the net change in employment is expected to reveal that the economy has gained 50.0k jobs after gaining 178.8k in October. Conditional upon the minutes confirming that RBA officials are not in a rush to act again any time soon, this release is unlikely to make them change their minds. 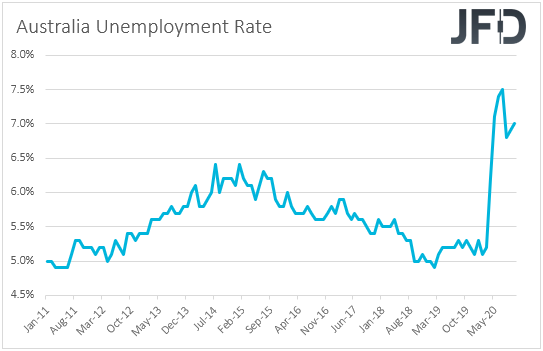 Later in the day, we have Eurozone’s final CPIs for November, but as it is always the case, they are expected to confirm their preliminary estimates.

Finally, on Friday, we have the BoJ. No material change is expected from this Bank either and thus, the yen is unlikely to react. We believe that the safe-haven currency will stay mostly sensitive to developments surrounding the broader market sentiment, and especially the coronavirus and its vaccines. The first doses of the vaccine developed by Pfizer (NYSE:) and its German partner BioNTech (NASDAQ:) will be delivered on Monday to 145 locations around the US, and the degree of its effectiveness may be the catalyst behind the next direction of the market. Anything suggesting that there are no side effects may allow risk-linked assets to march north, and force safe-havens, like the yen, to slide.

Japan’s National CPIs for November are also coming out, ahead of the monetary policy decision. While no forecast is available for the headline rate, the one is expected to have slid further into the negative territory. Specifically, it is expected to have declined to -0.9% yoy from -0.7%. 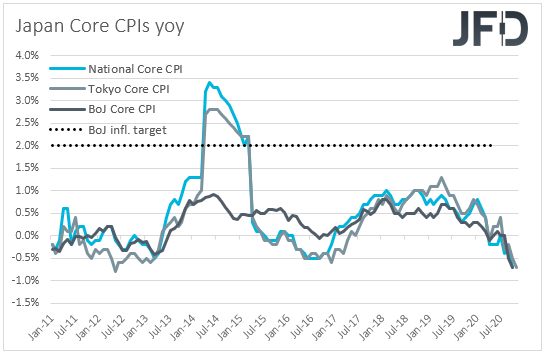