We will have a busy calendar, starting from Wednesday. China, Germany, Norway and the will be releasing their inflation numbers. The Fed’s Monetary Policy Report will be delivered on Thursday. On Friday, and the will release their GDP growth numbers, which will be monitored carefully.

Monday will be a quiet day in regards to economic data releases. Only Switzerland has already delivered its seasonally and non-seasonally adjusted figures for the month of January. The was expected to come out 3.4%, but it showed up at 3.7%, which is a slight disappointment for the Swiss jobs market. The s.a. unemployment number came out as expected, at 3.5%.

Tuesday is also a relatively quiet day. The only worthwhile data set, which we will keep an eye on will be the US Energy Information Administration’s (EIA) Every month, EIA delivers its forecast on consumption, supply and prices in relation to oil-related products. Also, from the US, we will get the job openings number for the month of December. Currently, the expectation is for the number to decline from 6.527M to 6.400M. If the actual number comes out lower than the forecast, this could be bad for the . However, we believe that USD may ignore the figure and instead, stay more vulnerable to the broader market sentiment.

Wednesday will be a busier day than the previous two, as some investors will be keeping a close eye on the economic calendar. China will kick off the day with its and inflation readings for the month of January. The MoM figure is expected to have improved, going from +0.7% to +1.1%, whereas the YoY figure is believed to have gone negative by a tenth of a percent to -0.1%. If so, this would be the second time since November 2009 that the number had gone negative. Recently, the November 2020 YoY figure was seen coming out at -0.5%. Let’s remind our readers that the PBOC’s inflation target is around +3.0%. It seems that this might be time for the Chinese central bank to go ahead with the rate cut, however, they are willing to continue maintaining their rate at +3.85%, at least for a while more. Last time the Bank cut the rate was back in April 2020. 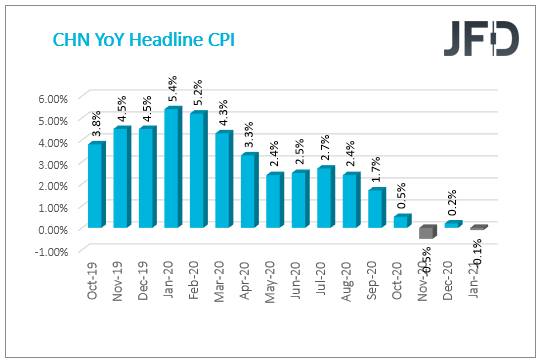 During the European morning, Germany and Norway will release their MoM and YoY inflation numbers for the previous month. Currently, the expectation for the German figures is to see an improvement in both numbers. The is forecasted to rise from +0.5% to +0.8% and the reading is expected to move from -0.3% to +1.0%. If the actual numbers come out as expected, this would confirm the preliminary inflation readings delivered at the end of January, possibly giving the common currency a boost. In addition to the headline readings, Norway will release the numbers for the month of January. Apart from the headline figure, which is believed to have risen from +1.4% to +1.6%, all other ones are expected to have declined somewhat. During the previous month, the headline YoY CPI number also moved higher, which was mainly driven by the rise in prices of transportation, furnishings, household equipment and routine maintenance. That might have been the result of a combination of increased spending during the holiday season and some coronavirus restrictions, where people were encouraged to remain indoors. 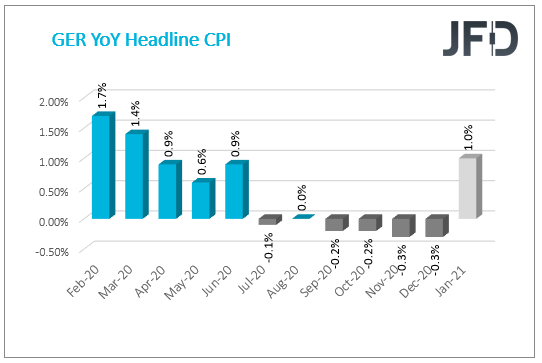 We will also watch out for Sweden’s Riksbank rate decision. The expectation is for the rates to remain the same, at 0.0%. During the last meeting in November, Sweden’s central bank kept the benchmark rate at the same 0.0%, due to concerns of possible further economic downturn caused by the pandemic. The lower rate is expected to help support the Swedish economy, together with the extension and expansion of the Riksank’s asset purchases up to December 2021.

It will be the US turn to show how their inflation figures performed during the month of January. The core and the headline MoM and YoY figures will be monitored carefully. The readings are believed to come out mixed. The and the figures are forecasted to have improved, where the and the are expected to have declined. We will keep a close eye on the headline YoY number, which also includes food and energy prices. The forecast currently sits at +1.5%, which would be a slight improvement from the previous +1.4%. The Federal Reserve is still hoping to see inflation around +2.0% over the longer run. As per the FOMC’s most recent statement:

“With inflation running persistently below this longer-run goal, the Committee will aim to achieve inflation moderately above 2 percent for some time so that inflation averages 2 percent over time and longer‑term inflation expectations remain well anchored at 2 percent. The Committee expects to maintain an accommodative stance of monetary policy until these outcomes are achieved.” 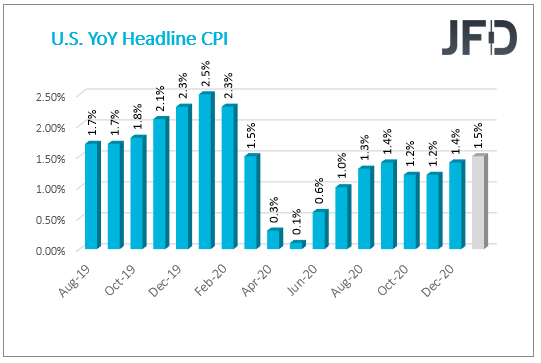 In addition to the CPIs, the US will deliver the crude oil number for the previous week. The figure measures the change in the number of oil barrels held by commercial US firms. If the number is greater than the previous, then this shows weaker demand. Currently, there is no forecast for that data set, but the past two readings were below zero, implying a rise in demand of . This might have supported the recent rise in Crude Oil WTI Futures oil prices. Later on, investors will also keep an eye on the US federal budget announcement.

On Thursday, investors will mainly monitor the data from the US, as we will be getting the jobless numbers for the previous week. The initial ones are forecasted to have declined fractionally, going from 779k to 775k. At the time of writing, there are no expectations for that indicator, but the number has been declining steadily. 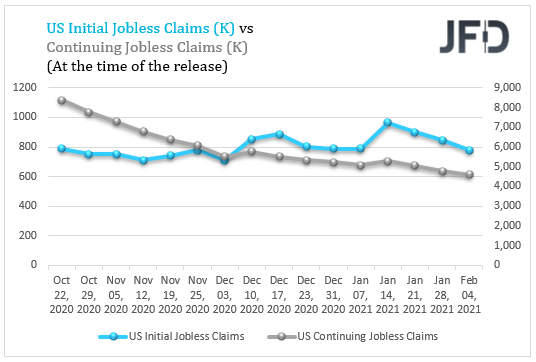 US initial VS continuing

Also, we will receive the Fed’s Report, which is a semi-annual report submitted to the Senate Committee on Banking, Housing, and Urban Affairs and to the House Committee on Financial Services, along with testimony from the Federal Reserve Board Chair. In the previous report, delivered in June 2020, the Fed estimated that there will be an improvement of the real GDP in 2021. That said, the number would deteriorate over time going forward. However, the unemployment rate is expected to improve and by 2022 should be around 5%. PCE inflation should also improve and eventually stabilize near +2.0%. The Fed funds rate should remain within its current range, between 0 and 25 bps, all the way till the end of 2021. But in the previous report it showed that the range is widening, meaning that changes could be expected.

Norway will release its GDP figures for Q4. Currently, there are no forecasts for the headline QoQ and YoY readings, but the is expected to have declined significantly, going from +5.2% to +1.2%. If the actual number shows up as the forecast, or below, this might have a negative effect on NOK against some of its major counterparts.

The UK will also report on its Q4 and GDP numbers, together with some of its economic indicators. However, the GDP figures will be the preliminary ones, where the YoY one is believed to have improved slightly from -8.6% to -8.1%, but the QoQ one is forecasted to have gone down drastically, from the previous +16.0% to +0.5%. If so, this could have a negative effect on the British against some of its major counterparts. In addition to the GDP figures, the UK will deliver the numbers for the month of December on a MoM and YoY basis. The MoM figure is believed to have remained the same, at +0.7%, whereas the YoY reading is expected to improve slightly from -3.8% to -3.4%. In terms of economic data from other countries, Canada will deliver numbers for the month of January on a MoM and YoY basis. There are no forecasts available at the time of writing, but the numbers have been rising steadily.