Yields continue to be the central, market-moving theme. On Friday, after the monthly US smashed through expectations, yields surged, triggering an equity selloff. Payrolls climbed by 379,000, more than double the 182,000 estimated, with the slipping to 6.2%, beating expectations which were for the data to remain fixed at 6.3%.

Only after yields stabilized later in the day did equities rebound. 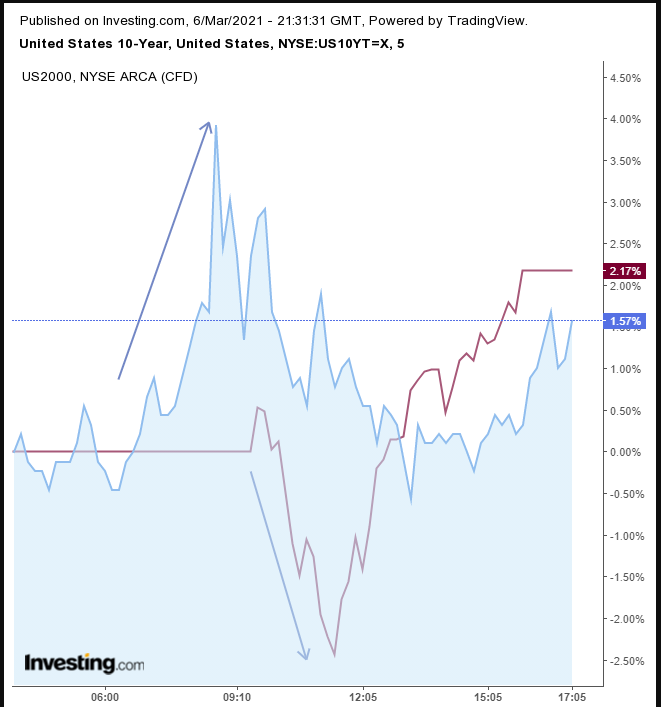 Indeed, we found it noteworthy, that yields did, in fact, recover. Though the earlier momentum slowed equity gains, ultimately rising rates didn’t put the brakes on stocks. The ability of stocks to advance in unison with rates bolsters the argument that yields will help, not impede an economic recovery.

Still, after Friday’s robust jobs release, fears have resurfaced that the US economy will overheat, fueling inflation, which in turn could prompt the Fed to raise interest rates—notwithtanding . The resurgence of rates threatens to topple the house-of-cards that is the US’s overvalued stock market, thanks to zero rates and abundant QE.

Case in point, the small cap (represented in the chart above) outperformed, (+2.1%), while the tech-heavy , which lists the biggest technology firms, lagged (+1.6%). This clearly illustrates the expectation of a reflation trade. Value stocks, which have suffered throughout the pandemic, have become the favorite while big tech, which benefited from the lockdowns, has been relegated to the back of the pack.

Maybe there’s some poetic justice then to the fact that Robinhood Markets, the trading app that helped retail investors spearhead the trading insanity recently seen with such stocks as GameStop (NYSE:) and AMC Entertainment (NYSE:), has chosen to list its IPO on the later this year. 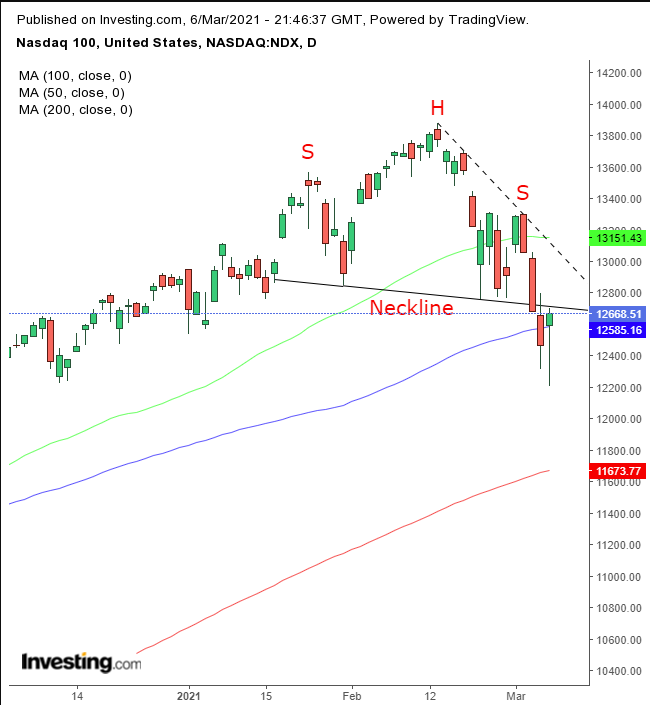 Based on the technicals, the immediate future for the NASDAQ 100 isn’t promising. While the price found support by the 100 DMA, producing a hammer, it also completed a small H&S top, whose neckline provided Friday’s trading resistance. However, even if the price rebounds on account of the hammer, the index has room to climb and still maintain the bearish implications of the pattern, as shown by the dotted downtrend line.

Friday’s rebound pared most of the losses for the and the NASDAQ indices, while the and the Russell 2000 both gained roughly 2%. The former was boosted because of its long-standing reputation as the benchmark that lists blue chip companies which tend to retain their value, while the latter lists domestic firms, which were starved during social restrictions, but are set to feast when the rising economy’s financial floodgates open.

Still, there’s lots of disagreement regarding what rising rates might actually portend. Federal Reserve Bank of St. Louis President James Bullard said that US Treasury yields have been on the rise because of strengthening economic outlook and were not a reason for worry, nor would they require any policy changes. His statement came after Fed Chair said on Thursday that the very same rising yields had caught his attention, and he would be “concerned by disorderly conditions in markets or persistent tightening in financial conditions.”

If the two statements seem contradictory, that’s because they are. Confirmation of the contradiction—and the need for all parties to get back on the same page—occurred, when Bullard felt the need to explain, in an interview Friday with Wharton Business Radio, that:

“As a central banker I am always concerned if there is disorderly trading or something that looks panicky. That would catch my attention. But I think we are not at that point.”

Thus, in employing the same phraseology as his boss, Bullard reframed the context. When Fed Chair Powell said that inflation was “notable and caught my attention,” what he really meant is that it would catch his attention.

And lo behold, US Treasury Secretary Janet Yellen declared that higher yields were a sign of a stronger recovery, not increased inflation concerns. Could it be there’s a concerted campaign to walk back the sentiments that fueld the selloff following Powell’s frank, but possibly imprecise remarks?

During his remarks on Thursday, Powell forecast an increase in consumer prices this summer—aka inflation—giving official voice to investors’ worst nightmares, after they’ve been pushing equities higher on the Fed’s QE ‘sugar’ rush for too long. The moment there’s even a hint they’ll be weaned off the easy money, tantrums erupt.

On Saturday, however, the Senate US President Joseph Biden’s, $1.9 trillion coronavirus fiscal aid package. The additional stimulus bill now needs to be voted on in the House before being signed into law this coming week.

As well, on Friday, the registered its second peak, establishing a new uptrend. 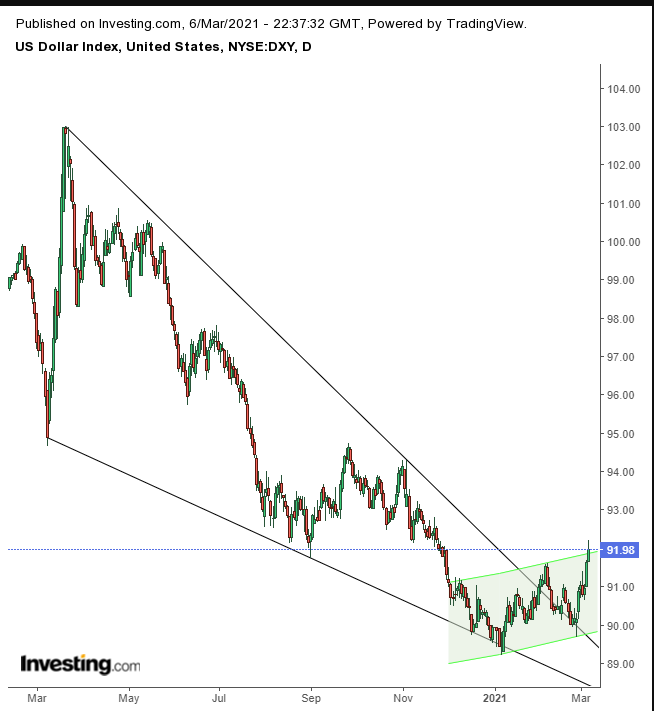 At the same time, the greenback forced the topside of a rising channel, as it attempts to steepen its incline, after confirming a successful topside breakout of a massive falling wedge since the March high.

If the dynamics that follow such a pattern would come to fruition, we could see the dollar head back to the 103 March 2020 high, suggesting the might overshadow concerns that unprecedented fiscal and monetary policies will “blow out the national savings rates and the current account deficit.”

dropped for the eighth out of nine sessions on Friday. 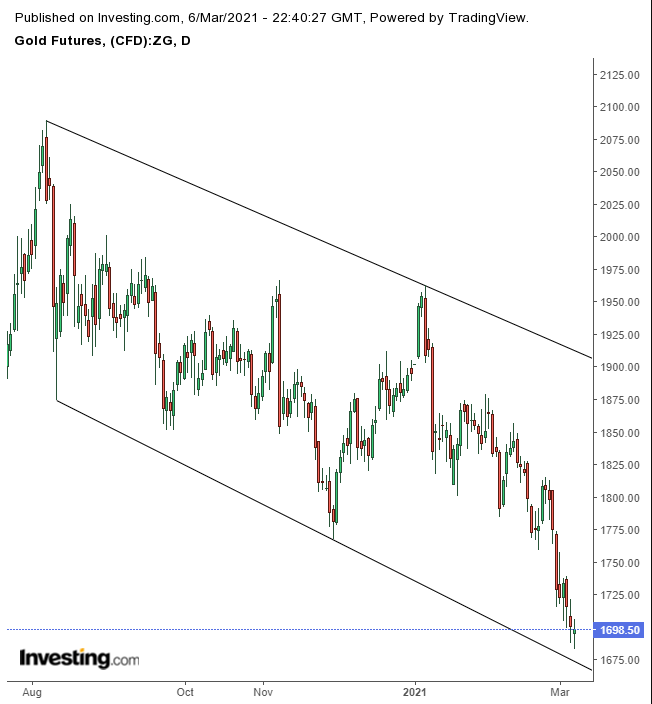 The yellow metal is approaching the bottom of a falling channel, from where the price has bounced since Aug. 12.

edged higher for the second day, now trading back above the $50K level.

advanced for the third straight day on Friday, building on a rally, after OPEC+ surprised markets by deciding to keep cuts in place. 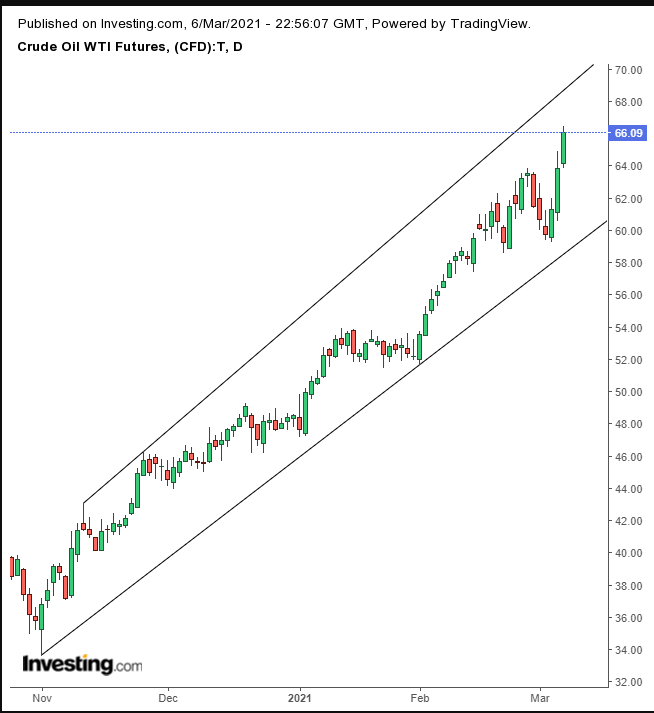 The price of WTI passed the $66 mark for the first time since April 2019. Another third-of-a-percent advance would bring crude to its highest level since October 2018. Based on the technicals it seems that’s exactly where the commodity is headed.

The price has now surpassed the February high, flipping market psychology, with the range’s interest in this trade. Expecting the same to the topside—along with its rising channel—has the contract testing the $70 level.