Equites trimmed losses on Friday after US President Donald Trump signed a stopgap funding bill to avoid a government shutdown. Helping ease the investor move out of stocks, Trump also announced, via video, that the first Pfizer (NYSE:) vaccines will be administered “in less than 24 hours.”

However, lawmakers made no mention of the broader COVID fiscal aid package that’s been roiling markets for weeks. As such, expect market volatility to continue on rapid sentiment reversals between hopes of vaccine availability and pessimism on rising coronavirus cases worldwide along with increasing fatalities that will continue to pressure the global economy.

Time is running out for passage of additional US fiscal stimulus in 2020 as the year winds down and the holidays rapidly approach. Congressional parties hit a brick wall yet again, even with the scaled-down $900 billion plan, this time on conflict over employer virus liability. Each time the negotiations appear to be about to settle, another hurdle seems to emerge.

At the same time, coronavirus cases across the US continue building while hospital-bed availability shrinks. As well, this coming week, the US COVID death rate will likely hit 300,000, with millions already testing positive for the virus.

Stocks saw their first weekly declines in three weeks as trading ended on Friday. Though the erased an almost 1% loss in the final three hours of the session, the the index declined by 1% for the week, its worst weekly performance since October.

On Thursday, the broad benchmark closed at 26 times earnings. That’s close to the Sept. 2 ratio of 27.2, the highest since data started being compiled by Bloomberg in 1990. This indicator was cited by Jeffrey Gundlach, chief executive officer of DoubleLine Capital LP, in a presentation on Tuesday. The SPX hasn’t set a similar high relative to the past year’s earnings or next year’s estimates.

All major US equity benchmarks hit records last week before slipping moderately. Only the closed higher on Friday, but still finished 0.6% lower for the week.

Nevertheless, even with pandemic and repeated stimulus disappointments during the latter part of the year, the S&P 500 posted 30 all-time highs thus far in 2020. Yet more surprising, 17 of these followed the COVID-driven, fastest bear market on record during March. Another four occurred during the past two weeks.

Given that the much vaunted exuberant economic recovery fizzled, are investors complacent? Or are they making an intelligent gamble?

We couldn’t possibly know, of course. However, we’ve been bearish and mistrustful of one of the strongest rebounds on record since the March bottom.

Meanwhile, the rotation out of technology stocks continued as the trading week came to a close.The slumped 0.25%, underperforming the S&P and Dow, as investors presumably moved out of stocks that outperformed during the first coronavirus wave, rotating into value stocks on expectations of an economic recovery as the availability of vaccines becomes a reality.

However, on Friday, the cyclical rotation wasn’t completely evident. and sector shares underperformed, with each group declining around a full percent. and were also pressured lower, while —the poster child for work-from-home shares—outperformed for the day, up 0.6%.

The dropped on Friday and plunged 1.2% for the week, dragged lower by Facebook (NASDAQ:) and (NASDAQ:). The electric car manufacturer informed employees on Friday it would unexptectedly be shutting down production of its Model S and X autos for 18 days beginning Dec. 24.

Facebook has been under pressure since Wednesday when an antitrust suit was filed against it by the US federal government as well as 46 individual states. The social media behemoth of “using a “buy or bury” strategy to snap up rivals and keep smaller competitors at bay.”

We find it astonishing that even after legal proceedings of this magnituted have been levied against it, investors continue to buy the stock. 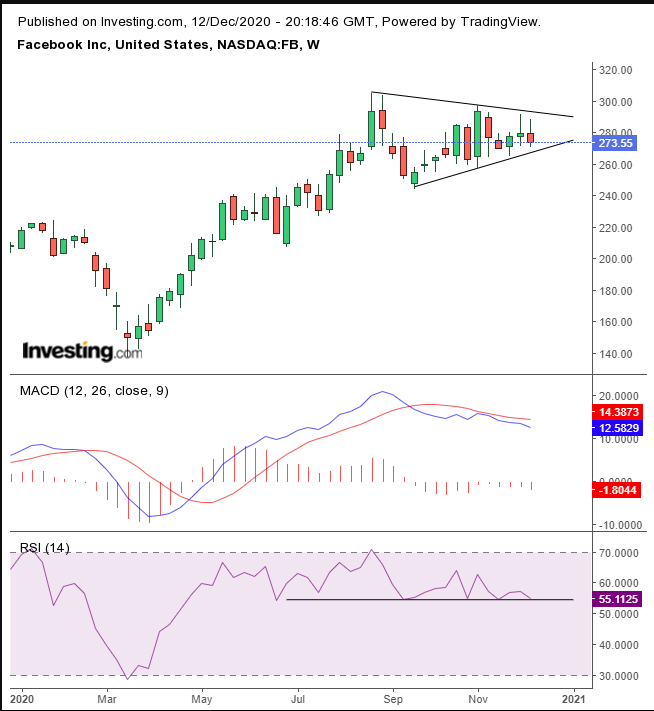 The price is developing a symmetrical triangle. While, by definition, the symmetry between supply and demand suggests the breakout could go either up or down, there is a bias to continue in the direction of the uptrend. Though the RSI is in a holding pattern, the MACD is decidely bearish.

On Friday, the Dow’s positive performance was attributable to Disney (NYSE:) which vaulted higher by 14%, hitting a new record for the entertainment company stock, bringing it to a $300 billion market cap, surpassing competitor Netflix’s (NASDAQ:) valuation of $219 billion. The jump came after the company said its Disney+ streaming service would triple its subscriber base. 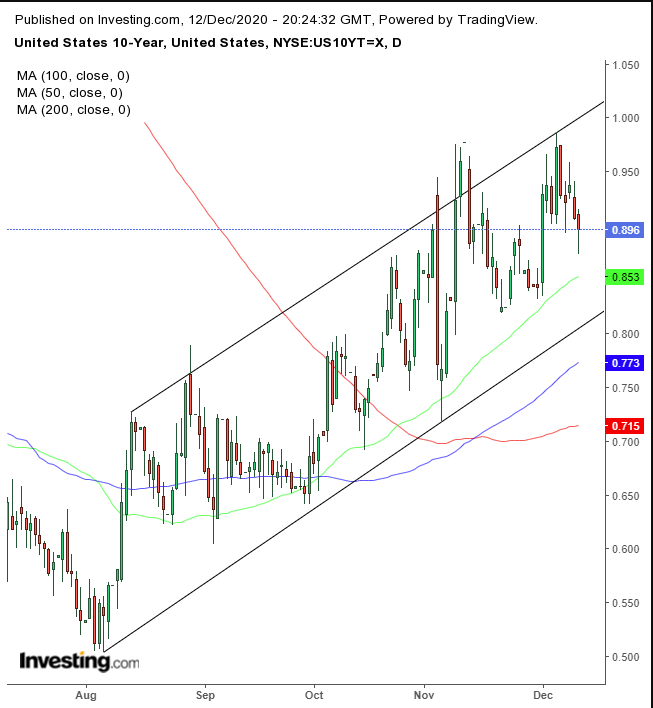 This pulled yields for the note back below 0.9% after the benchmark sovereign bond came within a hair of the 1% level on Thursday, for the first time since March. Nevertheless, rates are still in an uptrend and hovering near 9-month-highs.

The found its footing after a three-week straight loss. 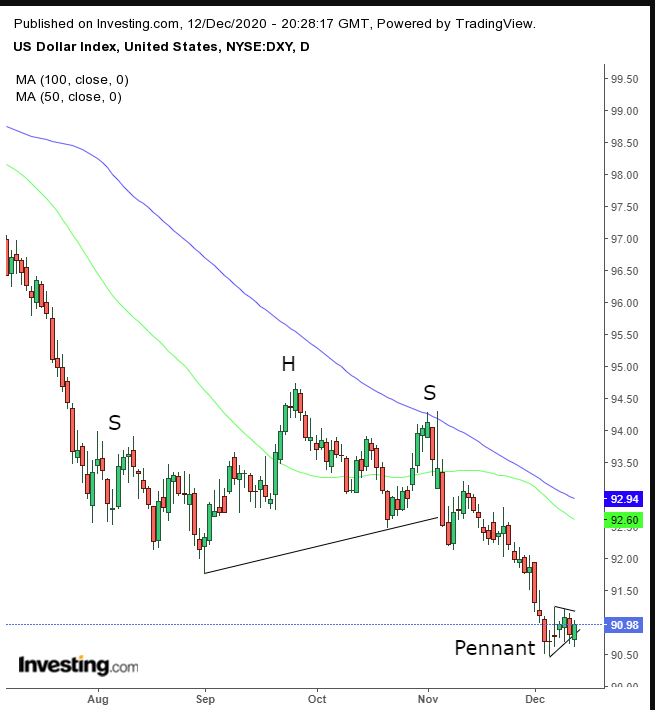 The greenback formed a pennant, considered bearish after the preceding drop.

tumbled for a second day as the trading week came to a close, when both UK Prime Minister Boris Johnson and European Commission President Ursula von der Leyen warned that a no-deal Brexit is “very, very likely.” 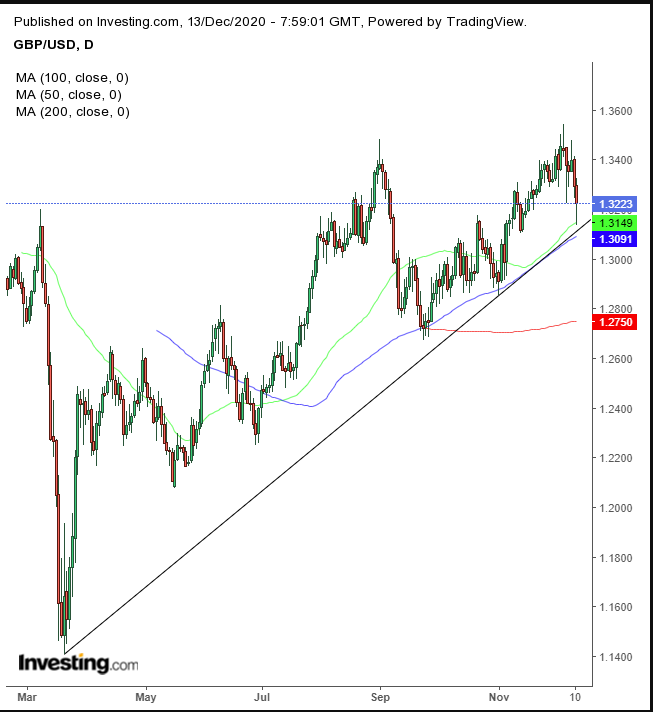 From a technical perspective, Cable rebounded off the uptrend line since the March bottom, supported by both the 50 and 100 DMAs.

climbed for the second week, for the first time in over two months. 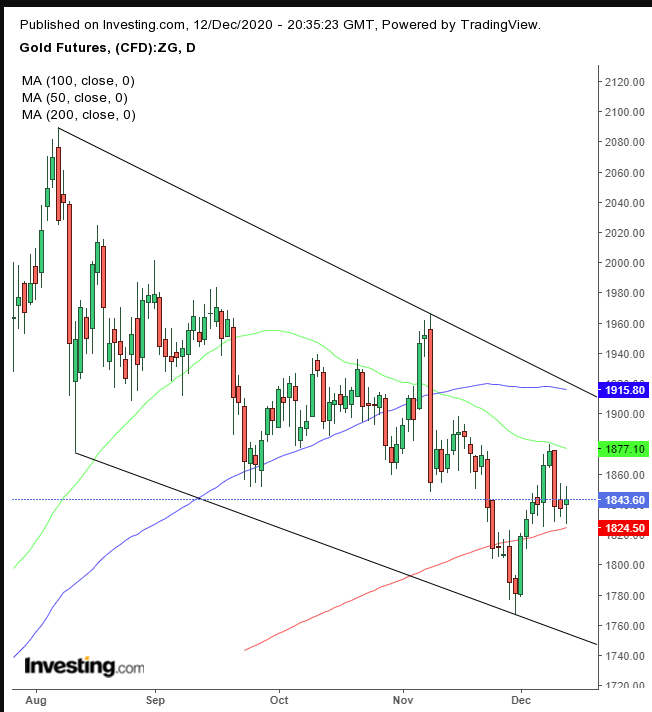 The price of the precious metal is being squeezed between the 50 and 200 DMA, in the center of a falling channel.

Oil bulls rested after a significant rally, even amid increasing COVID-19 lockdown restrictions. 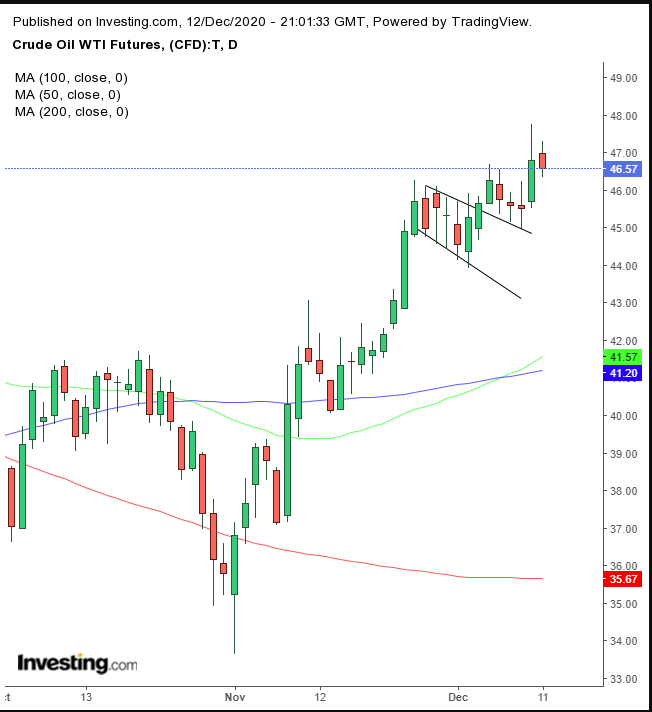 The breather follows the confirmation for the commodity of a completed .