We expect equities to keep swerving between gains on optimistic vaccine news and pessimism about the ongoing escalation of the worst pandemic in a century. The viral outbreak has pressured what could have otherwise been a V-shaped recovery, and , will likely continue to do so into 2021.

However, given the trajectory of the balance of supply and demand, further S&P 500 gains appear likely. But oil slumped on Friday amid rising tensions between OPEC+ members ahead of the this coming week. Still, it was the fourth week in a row that the commodity increased on a weekly basis.

American equities on the climbed to a fresh record on Friday, amid thin volume during the Thanksgiving holiday weekend. So far, November has been the best month for the SPX since 1950.

The benchmark index climbed +0.25% on the final day of trade for the week, to add 11% of value over the month with just one more trading day to go. On a percentage basis, the S&P 500 is on track to have its best November since 1928. 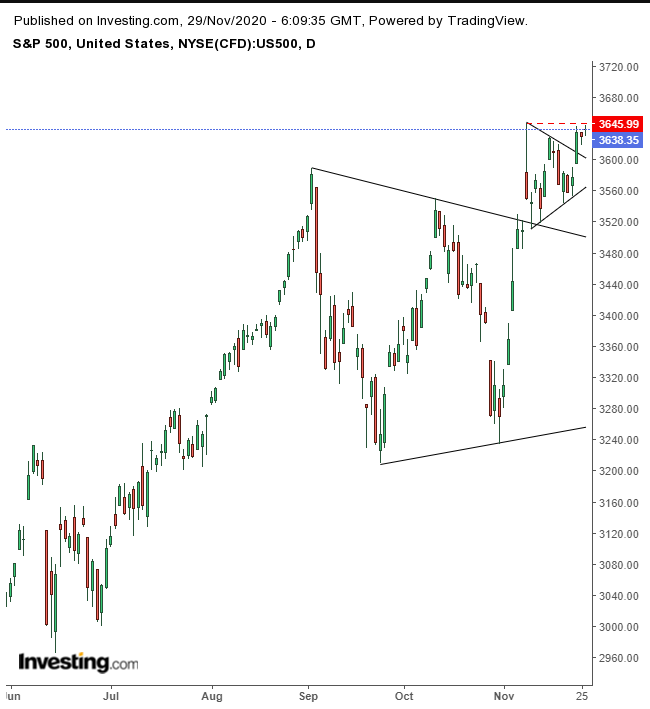 The index completed a pennant on Friday, a continuation pattern suggesting the return move toward the preceding symmetrical triangle may be over and the balance of supply and demand is ready to resume moving higher, though the massive Nov. 9-shooting star has to be cleared to ensure that all supply has been absorbed.

As for the 30-component , this November has been its best month since January 1987. The oldest US stock index also crossed the 30,000 milestone for the first time early last week.

The is on track to add nearly 12% for the month, its best November since 2001. The tech-heavy index rose 0.9% on Friday, for a weekly gain of 2.75% after three straight days of rallying. It also notched a new record to finish the week.

However, while the —which had been sold off earlier in the month as investors dumped technology sector shares in order to rotate into value stocks—jumped 0.87% on Friday, it remains 1.3% away from its Sept. 2 record close.

The small-cap added 0.56%, as well as another record. It also closed on strength, at the very highest point of the session.

Still, Friday’s record-breaking action was made on only 60% of the regular trading volume seen over the past year, and the stock market closed early due to it being a holiday weekend, which suggests the moves may not necessarily be representative of the overall supply and demand.

Global shares are up 13%, which has lifted valuations to their highest levels in roughly 20 years. That would set November up for the best month for equities on record outside the US as well.

Nonetheless, with coronavirus cases at more than 62.3 million worldwide and fatalities topping 1.45 million, it’s no surprise traders are wavering between risk-on and risk-off. US President-elect Joe Biden has warned of a “long, hard winter” because of COVID. And in Europe, the total number of cases in Germany topped 1 million, and the number of patients in intensive care rose to record levels.

It’s therefore critical to make a distinction between continuously record-breaking stocks—which signals an optimistic eye toward the future—and the wobbly economic recovery currently in progress from the worst recession since the 1930s. Investors may be hopeful regarding the rapid introduction of vaccines, but we have consistently been warning there is still a great deal of uncertainty ahead, in terms of distribution logistics on a mass scale, as well as the amount of time during which the vaccine will remain effective. Of concern as well: whether those vaccines currently under development will be effective on a virus that also continues to mutate.

At the same time, as of last week, at least one key uncertainty appears to have been removed. The transition to a Biden administration was finally given a green light when funding was ultimately released by the Republican-led General Services Administration. 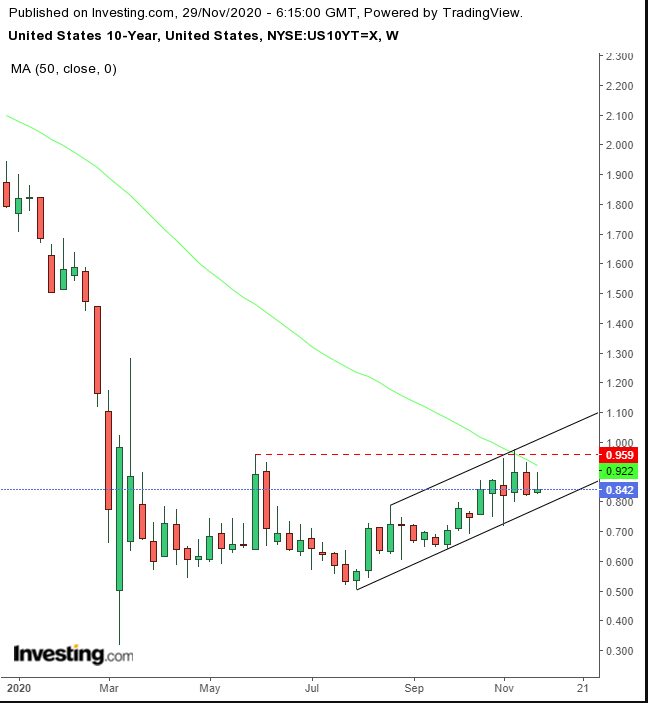 Yield, including for the Treasury note, have been within a rising channel since the early-August bottom. Rates found resistance by the 50-week MA, matching the resistance of the early-July highs. Should yields resume their upmove along the rising channel, past the 1.00% level, they will have completed a bottom. 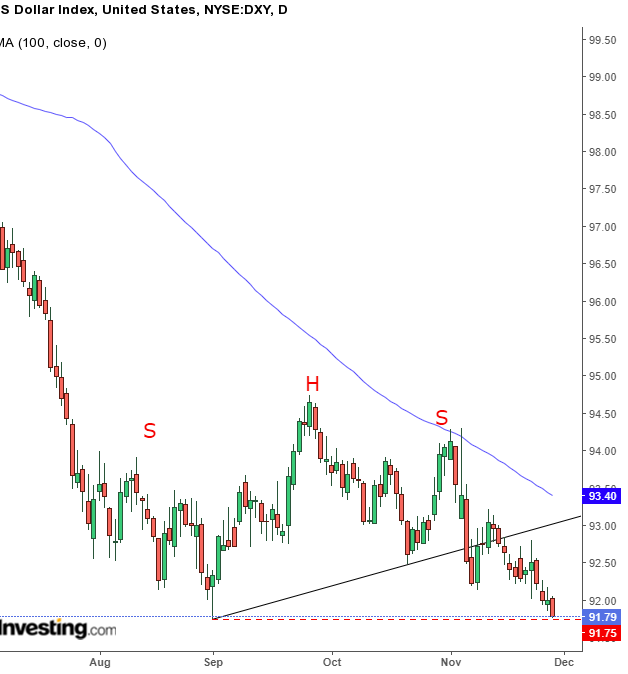 The only support that remains for the greenback is the Sept. 1 hammer, which began developing a H&S continuation pattern, demonstrating that the pause is over, and the USD is ready to resume the underlying downtrend. 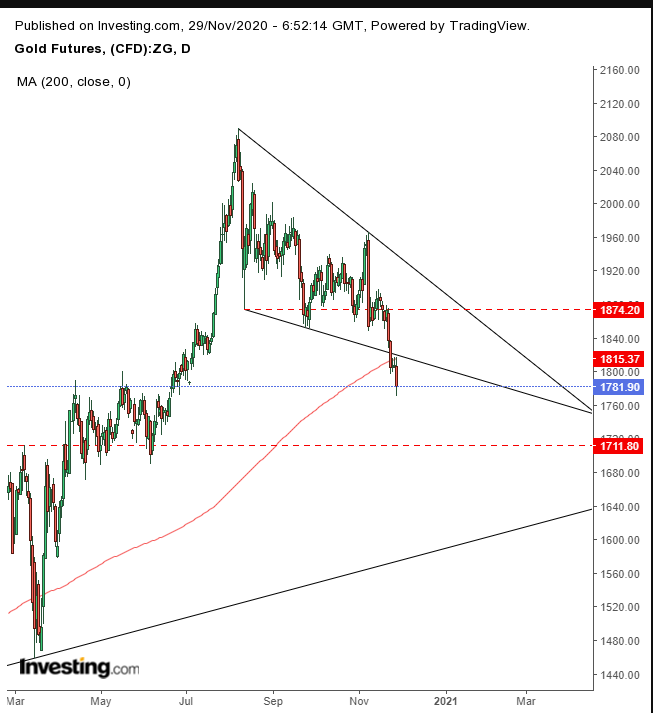 The precious metal dropped 1.24%, falling from the corresponding resistances of what we, for some time now, considered a bullish wedge and the 200DMA. In retrospect, however, it may have been trading according to the dynamics of a falling channel or a descending triangle (red dotted line). While we remain bullish on the yellow metal in the long-term, we’ve turned bearish in the short- to medium-term. We expect the price to retest the $1,700 level on its way down to the uptrend line in place since the May low.

Similarly, though we expect to head higher over the longer term, we had been that a correction was due for the cryptocurrency after it reached the top of a rising channel. 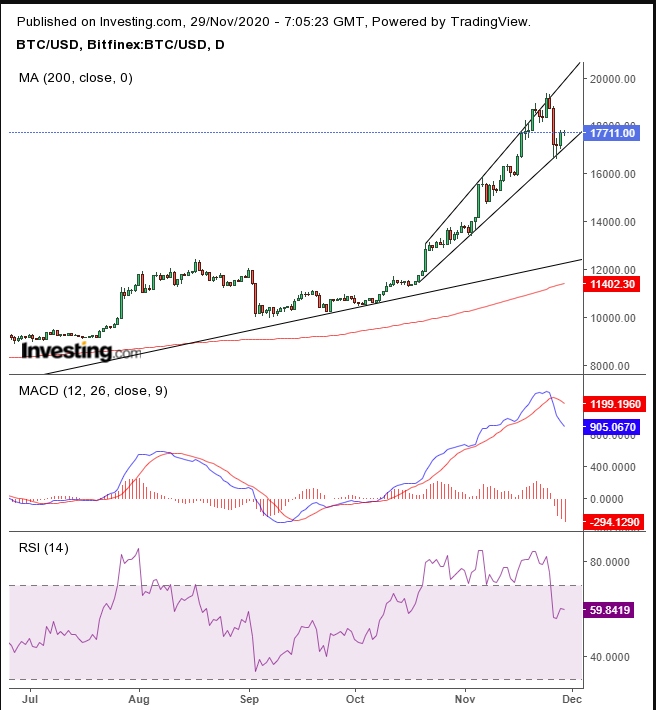 Sure enough, when that happened the price fell. It found support at the bottom of that same channel and reversed course from there.

Bitcoin’s recent, exuberant rally has seen the digital token soar disproportionately higher from its uptrend line, and the elevated MACD and RSI suggest the price needs to come down to earth. We have been warning that the recent advance may be fueled by retail traders. Should that turn out to be the case, it may signal a top.

Analysts are warning that so-called Bitcoin whales were of the same view, as they recently dumped their holdings.

With COVID flattened shale production hampering US output, OPEC+ is now the sole superpower. Nonetheless, the split factions within the extended cartel have proven too cumbersome to effectively deal with the in history. 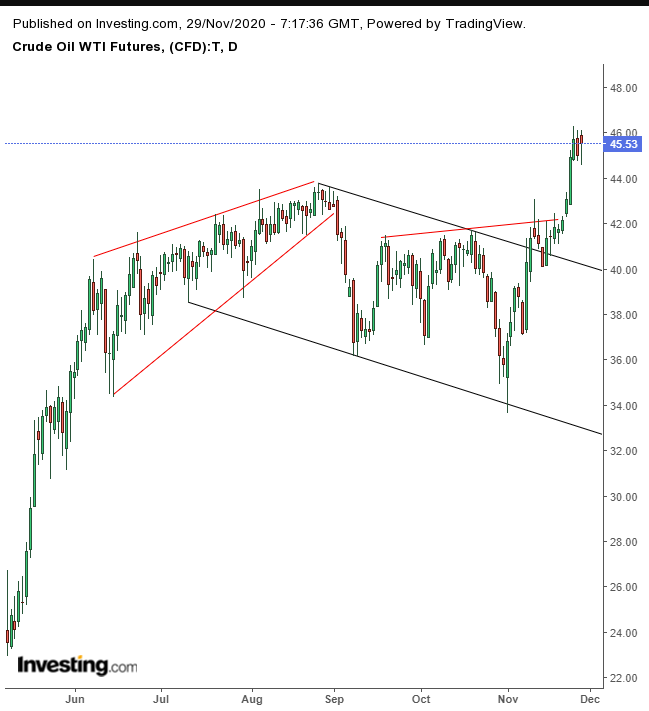 Still, for now, at least, vaccine optimism is allowing investors to fantasize about a return to normal. That was enough to upend repeated bearish trading patterns for the commodity. Though crude slipped on Friday, it advanced 1.2% for the week, sealing its fourth consecutive weekly advance, for the first time since late-August. More important: oil reached its highest level since Feb. 17, before the pandemic decimated the market.

All prices listed are EST