The , and indices all slumped on Friday, to complete the worst weekly selloff in three months. The sharp tumbles were triggered by speculative excess along with ongoing pandemic concerns and the continued inability of US and health systems to efficiently distribute vaccines. Expect these conditions to remain firmly in play as the trading week begins on Monday.

Worries that hedge funds would reduce market liquidity after taking a beating from retail traders and investors using social media platforms such as Reddit to drive a series of short-squeezes against fund short-targets such as GameStop (NYSE:) and AMC (NYSE:) among others has been gaining traction. GME jumped 400% last week, while AMC gained 278% for the week.

Conversely, the SPX lost nearly 2% on the final day of trade for the week and month. During January, the benchmark index fell 1.1% while the 30-component Dow dropped 2% for the month. The volatility index rose 45% during January. 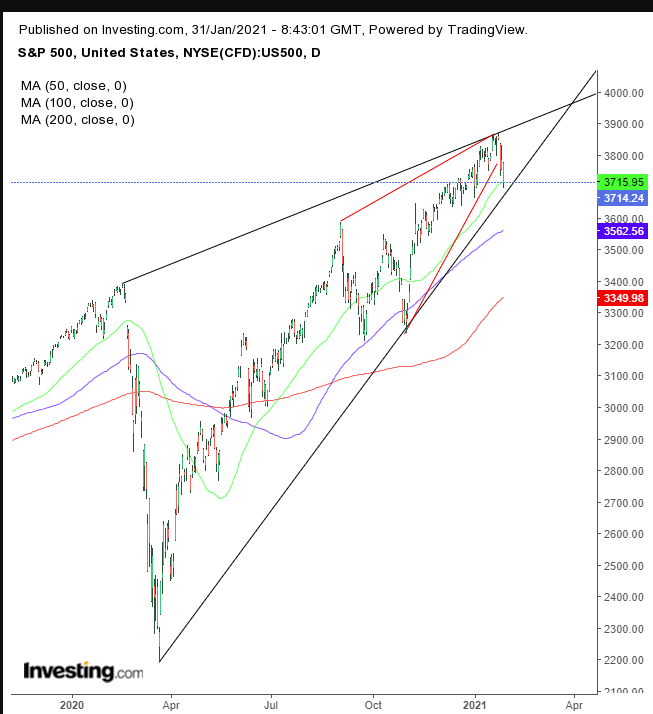 The S&P 500 found support above the 50 DMA, after falling below its uptrend line since Oct. 30. However, both the MACD and RSI topped, suggesting the index price may fall toward the 100 DMA.

Fears that the market may slump further escalated after Thursday’s release showed a slower pace of growth for the US economy than had been seen in the previous quarter, due to more cautious , which is responsible for 70% of the country’s GDP. Analysts expect, however, that economic activity and employment should rebound, especially in the wake of the $900 billion Congressional fiscal stimulus package, passed in December, which was designed to be a catalyst for the faltering recovery.

Investors must now grapple with the question of whether the GameStop short squeeze is a bubble driven symptom of the kind seen during the 2000 dot.com run-up and 2008 housing bubble which ultimately pressured markets significantly lower.

A call uniting retails traders on Reddit to go against a massive GME hedge fund short went viral, pushing up GameStop shares. This was followed by additional retail trader moves on other stocks, forcing large funds to cover their positions, driving prices of some poorly performing stocks sky-high.

GME finished Friday’s session at $325, locking in a 400% surge in just the past week, which included Thursday’s 44% plunge, that erased $11 billion in value, after brokers disabled retail accounts only on the buy side. The fact that brokers enabled only the side that helped hedge funds versus the little guy, raised potential conflict of interest issues, not to mention the idea that a conspiracy to manipulate the stock market or even securities fraud was in play.

Vladimir Tenev, CEO of the popular financial trading app Robinhood, explained that they were forced to restrict buying because of regulatory issues and clearing houses increasing financial security requirements amid unprecedented volatility. Whatever the causes of the trading restrictions of some retail accounts, lawmakers in Washington have called for investigations.

Whether Robinhood and other brokers have been siding with the rich in order to steal from the poor, or whether the current action turns out to be a version of David versus Goliath—with Main Street’s retail traders taking on the Wall Street establishment—the wild volatility is occurring because of narrow market mechanics.

From our perspective, based on our understanding of the underlying causes of the volatility, however dramatic, we don’t believe it’s necessarily an indication of a market top. Having said that, market chain reactions sometimes have unintended consequences. As such, there is the possibility that this could lead to a big hedge fund market withdrawal whose volatility could add weight to already existing bearish sentiment around fears of the UK and South African coronavirus variants and vaccine woes.

Yields, including for the Treasury note, have fallen for the third straight week, attesting to investors preserving capital via the safety of Treasuries. 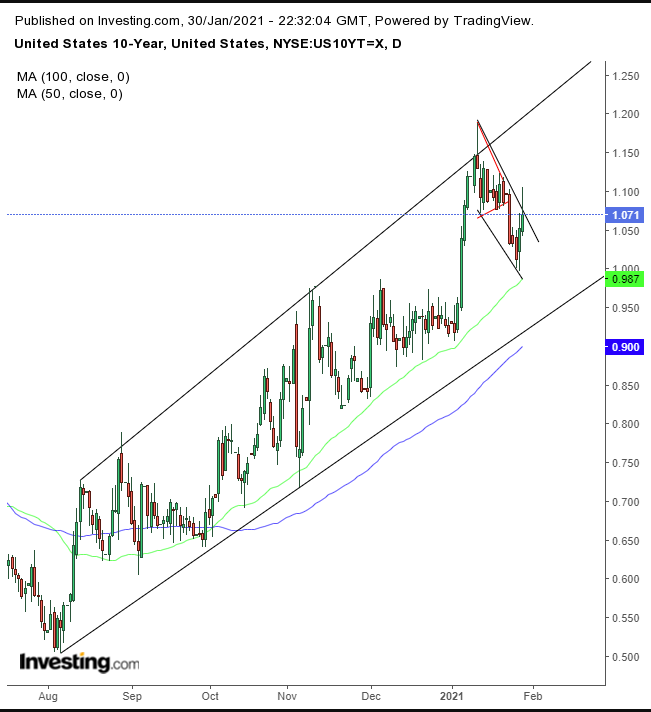 Still, rates have been moving along a falling flag, which morphed from an earlier, smaller pennant (red). The upside breakout—supported by the 50 DMA—will confirm the rising channel, which is being propelled by the 100 DMA.

The reversed higher, filling out a potential H&S bottom. 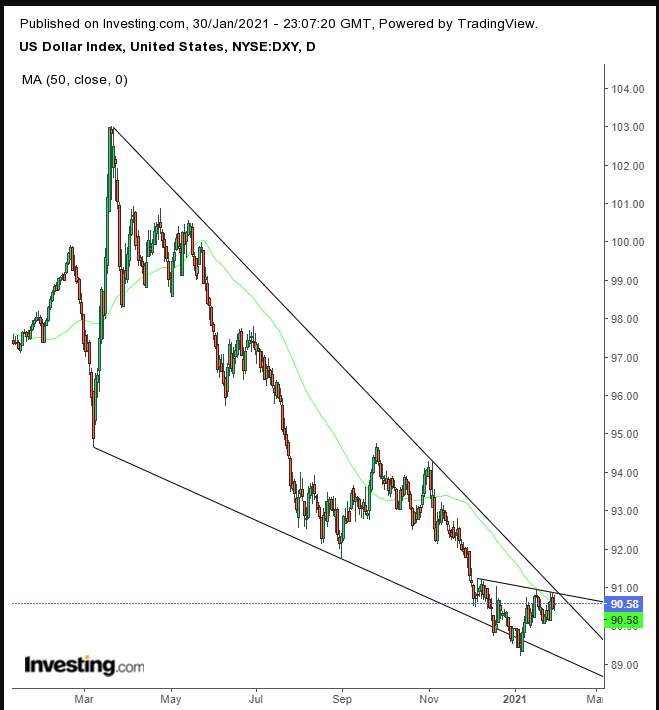 The of the move would include a massive falling wedge.

continued to be caught between two trends. 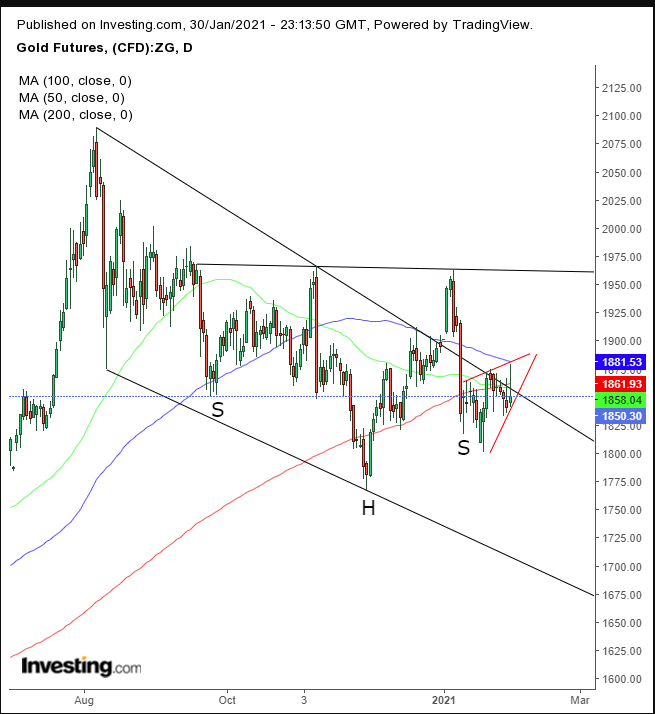 The price of the precious metal is developing a rising flag, bearish after the preceding 7.4% plunge in just the five sessions between Jan. 6-Jan. 11. It’s all developing within a falling channel to boot. On the other hand, there may be a supply-demand reversal, as the yellow metal draws out a H&S bottom.

climbed for the third day, turning positive for the week and ending a two-week-long losing streak. 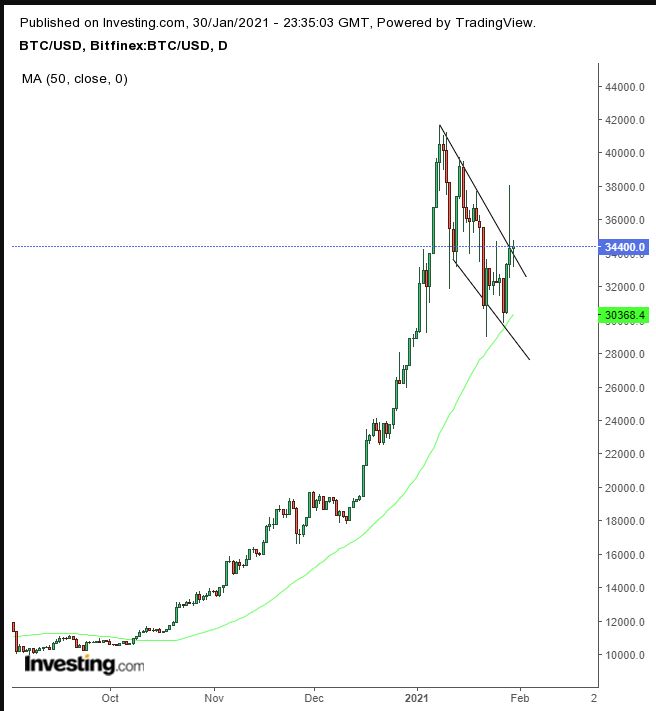 The most popular digital currency found resistance by the top of a range whose upside breakout would complete a falling flag, supported by the 50 DMA that has been undergirding the price since October.

was flat for the week. 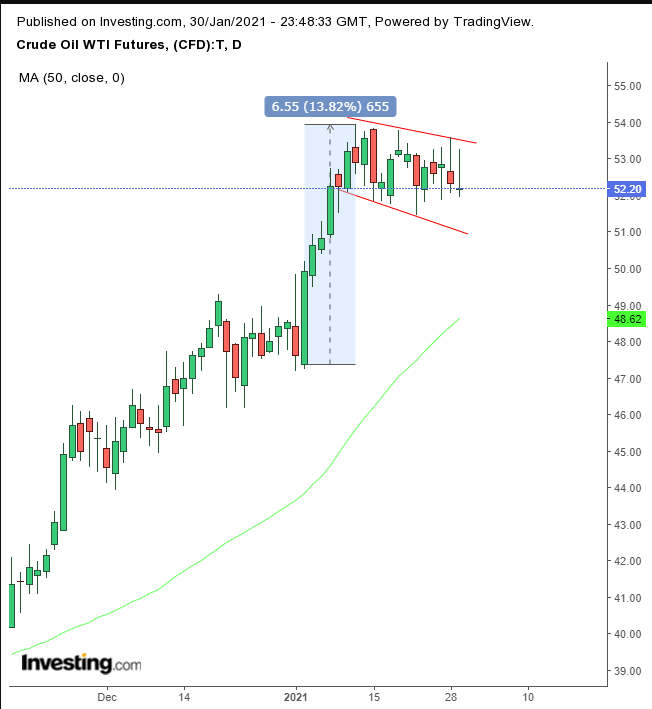 WTI has been meandering within a falling flag. An upside breakout would imply a target toward the $60 level, after the price spiked 6.5% within just seven sessions, which preceded the take-profit range.