Stocks extended the late-week rebound to hit a fresh record on Friday, boosted by strong earnings growth. All four major US indices—the , , and —finished higher ahead of the weekend. Helping buoy investor optimism: the logistics for vaccine distribution in the US improved, after President Joseph Biden announced his administration had purchased an additional 200 million COVID-19 inoculations.

The climbed 0.4% on Friday, to a record for the global equity index, advancing for the tenth straight day in a row, gaining 5.9%, in its longest winning streak in years. Risk-on sentiment will likely continue lifting markets into the coming week, even as US and data showed growth had stalled.

Ongoing continue to remain substantially higher than pre-pandemic levels which only served to reinforce the case and increase bets for additional stimulus along with the possibility of rising inflation. With no new obstacles in the week ahead on the economic calendar, stock bulls should find little resistance to their slow but dogged charge upward to new ground.

The S&P 500 scored yet another all-time high on Friday, this time with attitude, ahead of the three-day Presidents’ Day holiday weekend, with a solid candle no less, demonstrating trader confidence at being locked into the most expensive equities in history. The SPX gained 1.2% for the week while the Dow rose 1% and the tech-heavy NASDAQ added 1.7% over the same period.

significantly outperformed, (+1.5%), reflecting the rally in .

However, not every stock was a winning bet. Online travel company Expedia (NASDAQ:) released results that showed it had . Revenue plummeted 67%, slipping below the psychological billion-dollar level to just $920M—its fourth year-over-year drop in a row. 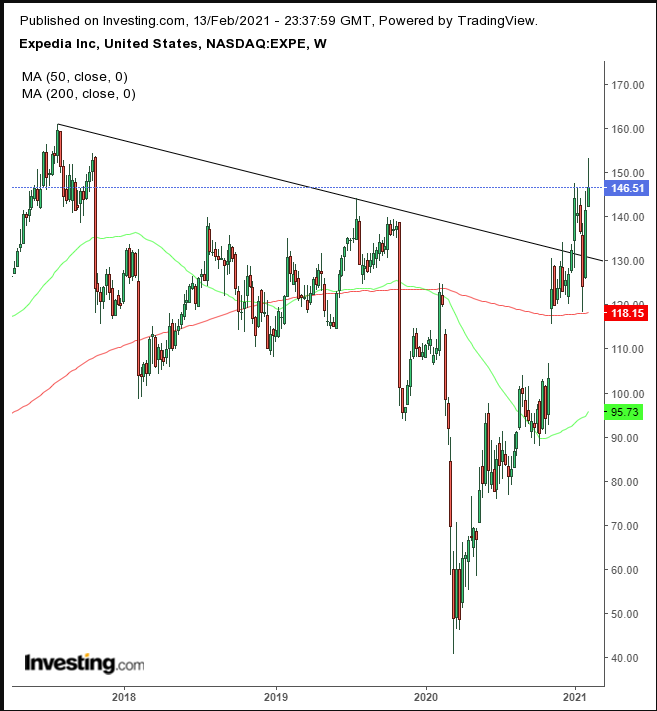 The stock registered a weekly shooting star, after crossing the downtrend line since the 2017 high, including repeated support at the 200 DMA. The bearish candle developed after nearing the year’s highs.

Along with stocks, Treasury yields, including for the benchmark note, rose above 1.2% for the first time since March. 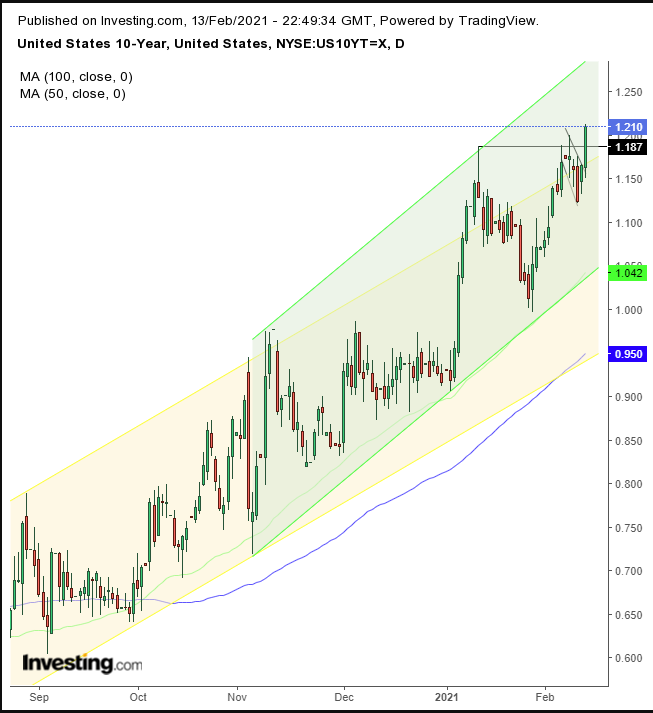 The rate provided an upside breakout to a falling flag, bullish after the 20 basis-point surge within 10 days. The flag was the device which enabled rates to slingshot through the Jan. 12 resistance enforced by the shooting star.

Note the upward shift in the rising channel, from the August low, which then accelerates more quickly in November. The 100 DMA traces the original channel, and the 50 DMA (green, so camouflaged) aligned with the bottom of the steeper channel.

But the real bond story was that the yield reached and closed above 2%, for the first time in a year, setting up the market expectation of a gain for the long bond to its highest level since 2014 when it averaged 3.34% and hit a high of 3.93% during the course of the year.

Is the expectation of rising inflation that’s currently part of the market narrative correct? We think so. In our view there are five reasons why:

The rose on Friday after five days of losses. 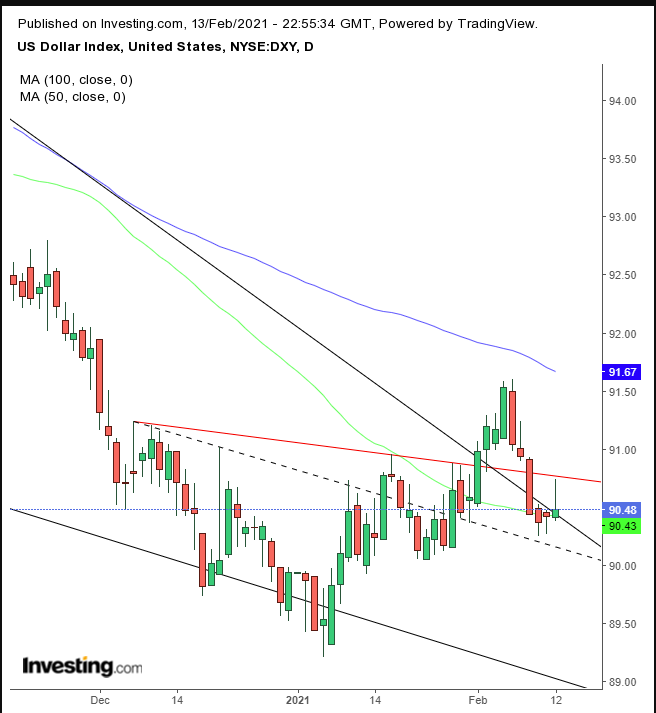 However, the greenback slipped ahead of the close, giving up almost all of its gains for the day. After the USD found support by an interpretation of one trend line (dotted line), it found resistance by another interpretation of a trend line (red). The dollar closed right on the top of a falling wedge since the March top.

fell for a second day, after the price of the precious metal found resistance by the bottom of a rising flag, for the second day in a row. 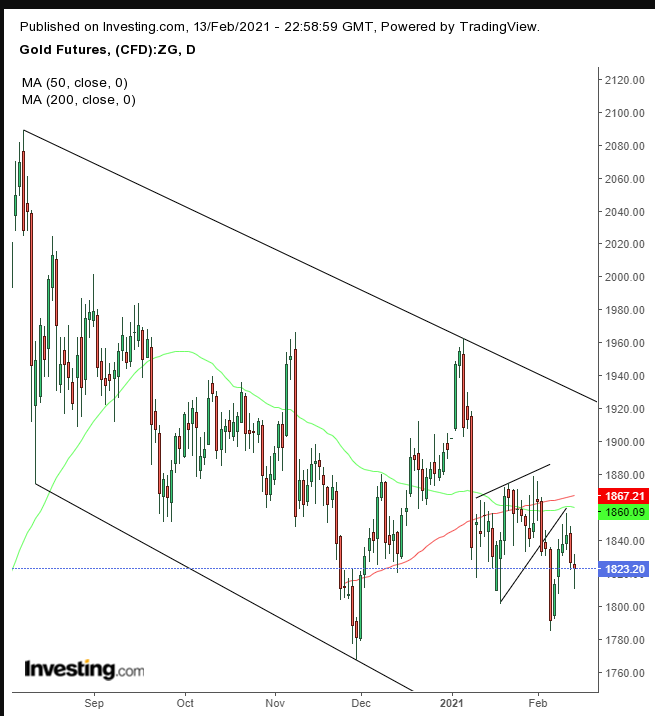 The 50 DMA crossed below the 200 DMA, triggering a death cross, amid the flag, bearish after the 7.4% decline in just four sessions and within a falling channel.

fell Saturday for the second day, after hitting a new all-time high above $49K. The most valued cryptocurrency by market cap is now up about 70% for the year. However, at time of writing, it continues to hover below the $50,000 threshold.

A unit of Morgan Stanley Investment Management is the latest mainstream financial firm that has said it’s to its $150 billion growth fund. Still, proceeding with this investment would require approvals from both the investment bank’s management and government financial regulators.

Oil surged on Friday, to its highest point since Jan. 7. The price rose to 12 cents below the $60 mark, as predicted by the we highlighted at the beginning of February.