American equites dropped during the final day of trade last week as the , , and each took a hard tumble on Friday, after major Wall Street banks provided and figures for December came in below expectations.

With markets finally receiving confirmation late Thursday from U.S. President-elect Joseph Biden that an additional stimulus package would be forthcoming after his inauguration on Wednesday, Jan. 20, equities are likely to pause during the upcoming week while awaiting the new President’s next moves.

Equity investors took some profit at the close of last week’s trade, after soon-to-be President Biden announced his $1.9 trillion COVID relief package, pressuring the SPX lower by 1.5% from the previous Friday’s record. However, stocks probably didn’t slip only because investors who’d bought the rumor of additional fiscal aid with Democrats at the helm were now selling the news.

There’s a rising sense of geopolitical risk as well, as the pandemic continues to escalate across the US and many parts of the world while vaccine distribution has been disappointingly slow. An additional hazard is the rapidly spreading mutated strain of the coronavirus that’s appeared in a variety of locations worldwide.

The S&P 500 slumped for a second straight day on Friday. 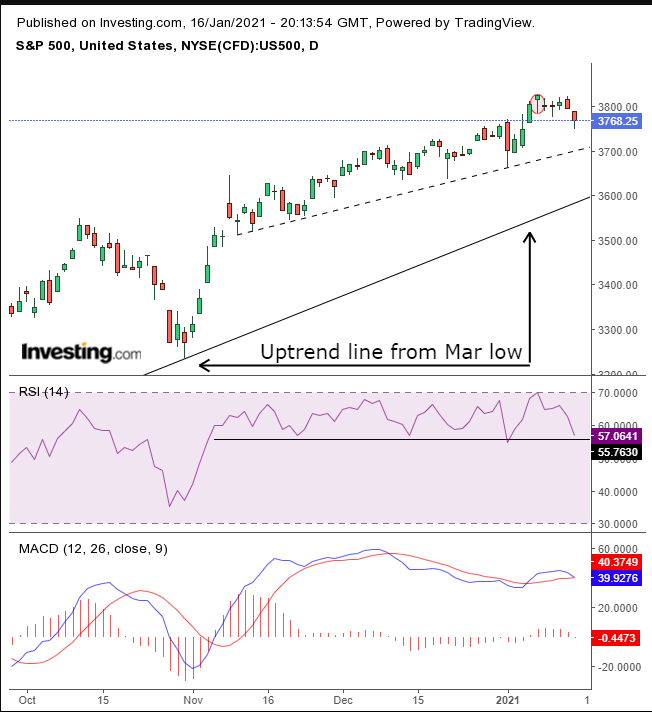 The benchmark index finally broke down after it was unable to shatter the resistance of a confirmed hanging man. The RSI and MACD appeared to be preparing to top out, sending the price to retest the uptrend line from the March low. 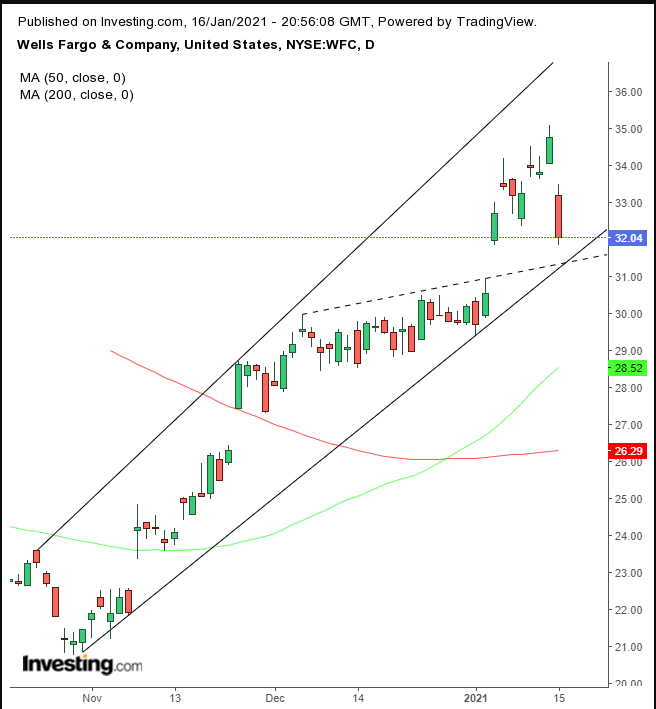 Technically, this could be a buying dip, a correction within a rising channel, after the 50 DMA crossed over the 200 DMA, triggering a golden cross. 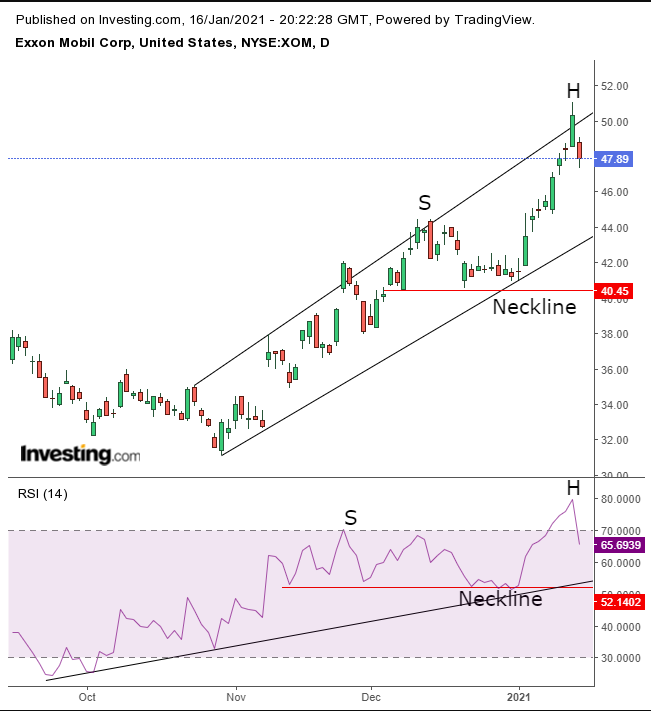 The stock completed an Evening Star at the top of a rising channel. The price should retest the bottom of the channel, but the RSI of 80, indicating shares are extremely oversold, may be signaling the formation of a H&S top.

outperformed on Friday, (+1.5%), and climbed 1.9% for the week, after the Fed suggested it will keep interest rates at record lows.

On a weekly basis the S&P 500 slipped, for the first time in three weeks. With a 1.5% loss for the week, it was the index’s worst performance in 11 weeks.

Yields, including for the Treasury note, retreated after surging 20 basis points in the previous week, the most since the near-24 basis points it gained in the first week of June. 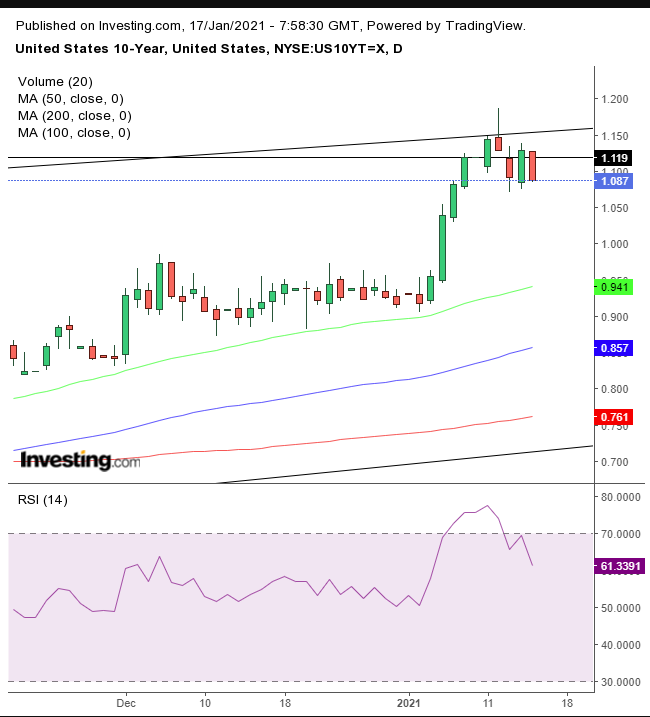 Last week’s Treasury selloff pushed yields above the psychological 1% level for the first time since March.

The expectation of additional stimulus, along with rising commodity prices and a lower dollar created the possibility of higher inflation ahead, for the first time in years, prompting demand for bonds with higher yields, as accelerating inflation would erode the purchasing power of Treasuries’ future cash flow.

Last week’s data, however, revealed only a small gain in prices for December. (excluding volatile food and energy) expanded 1.6%, well below the 2.2% average of 2019, before the pandemic.

From a technical perspective, yields found resistance at Wednesday’s falling gap, which followed Tuesday’s shooting star when rates failed to break free of a rising channel, in an attempt to ascend at a steeper angle. The 78 RSI was the most overbought since October 2018 when yields peaked at 3.26%.

At this point, rates have a long way to fall before hitting the bottom of the rising channel, while still maintaining their upward trajectory.

The climbed on Friday, sealing a second weekly gain, for the first time since early September. 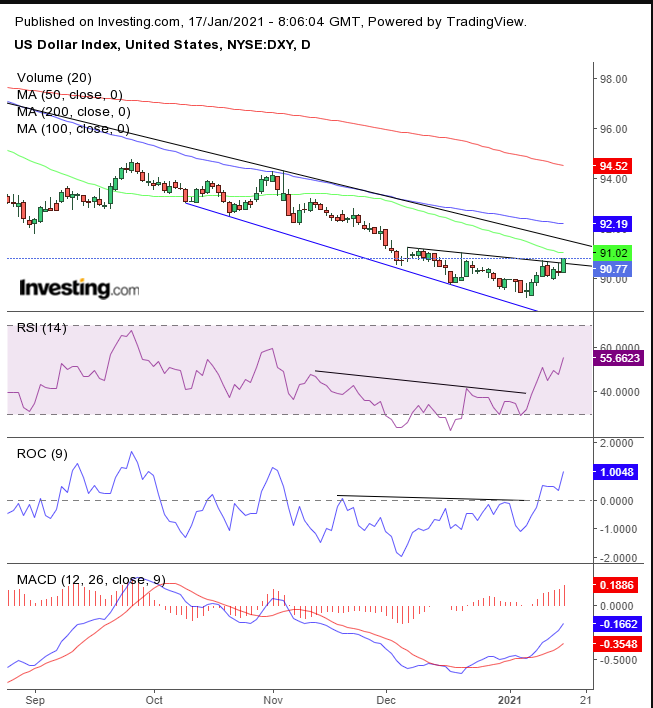 Technically, the USD closed slightly above a trendline in place since Dec. 7, potentially giving the greenback the impetus to take on the downtrend line since the March high. While this view is backed by the RSI, ROC and MACD all bottoming, it could also be rising along the natural downtrending pattern within a falling channel since Oct. 9, while remaining within the larger such channel since the March peak.

After failing to hold a 3% upside breakout, the price of retreated below the 200 DMA. 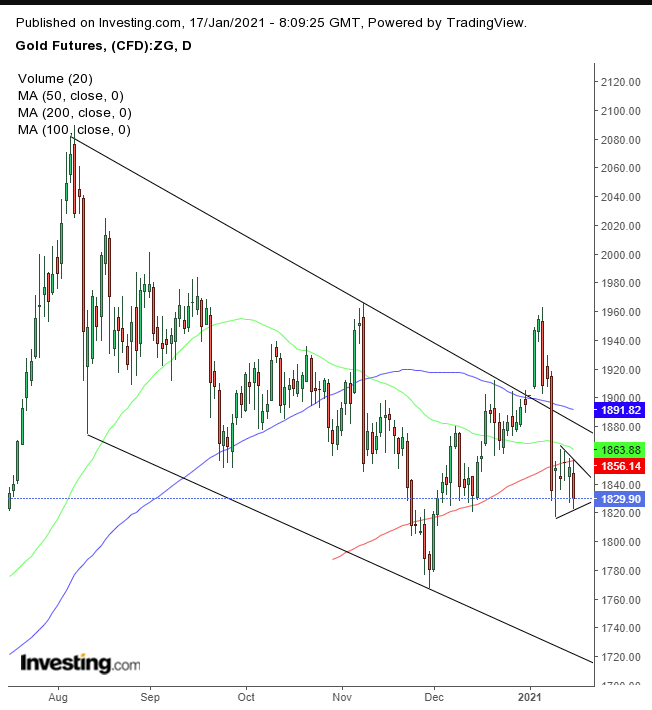 The precious metal is developing a pennant that’s bearish after the 7.3% plunge within just four sessions.

is down 6.2% over the weekend, extending its 10.25% plunge from last week. It was the first losing week after four consecutive weekly gains for the cryptocurrency, the longest winning streak since mid-November’s 5 straight weeks of gains. 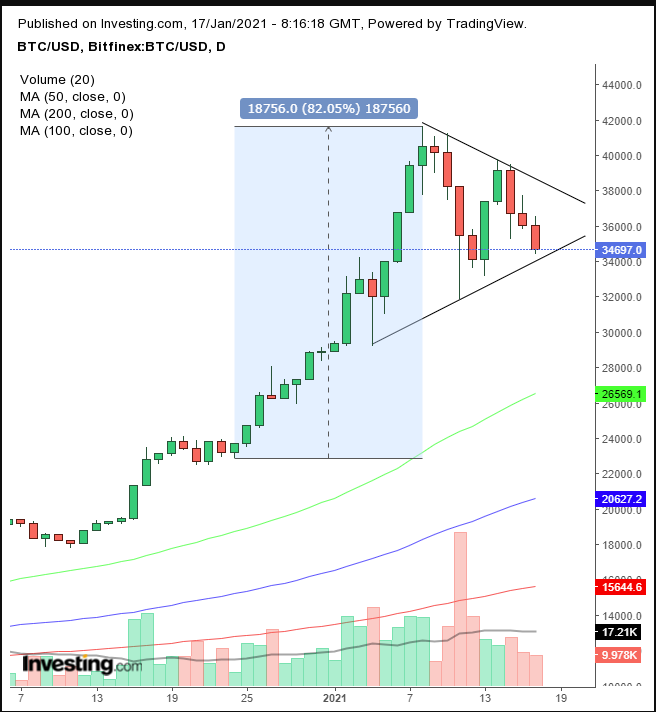 The digital currency has been trading within a pennant since Jan. 4, bullish after its mind-boggling, 82% acceleration in just 16 sessions. An upside breakout would imply a repeat of the near-$19,000 surge preceding the pattern.

receded from a 10-month high amid a strengthening dollar. 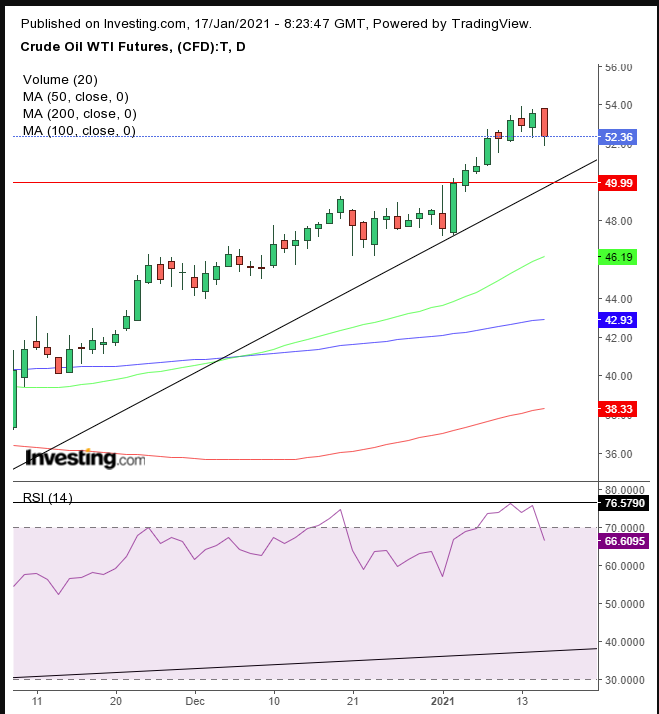 Technically, crude developed a Bearish Engulfing pattern which occurs when a second red candle opens higher but closes lower than a previous green candle. At the same time, the RSI retreated after registering the overbought condition of 76, the highest since January 2018.

The candlestick’s two-day bearish pattern, however, may be muted after last week’s mostly sideways move, rather than an immediate, steep rise, which would give bears added ammunition. The test will be the uptrend line at the psychological, key $50 level.

US Markets Closed for the Martin Luther King Jr. Holiday

Tentative: : after swearing-in, the new US President will address the nation.