Stocks made history during last week’s holiday-shortened trade, with both the and the hitting new all-time highs. While the Dow posted its record on Monday, closing slightly lower by Thursday, the S&P crossed the 4,000 threshold for the first time ever on Thursday, just ahead of the long weekend. The broad benchmark closed right below the very top of the session, demonstrating single-minded bullishness, at the start of Q2 2021 no less, which some investors are hoping bodes well for the new quarter.

As well, rose to a level not seen since the pandemic began and increased at the fastest rate of expansion since 1983. On Friday, the monthly release indicated the US job growth had surged in March, further signaling that the country’s economic recovery is gaining momentum.

An additional factor boosting the potential for economic optimism is US President Joseph Biden’s expansive infrastructure spending proposal, the American Jobs Plan, introduced last week. The legislation, which offers more than $2 trillion in additional spending for, among other things, roads, bridges, broadband access, public transportation and green energy initiatives, plus manufacturing and workforce development, could have far-reaching fiscal and tax implications over an eight year period.

However, given the hefty price tag needed to carry out the plan, rollbacks of the Trump administration 2017 tax cuts, as well as an increase in the corporate tax rate would be the likely drivers for funding. According to a , though the plan may be popular among voters, and Democratic lawmakers are supportive, Rebublicans are “sharply critical of the planned expansion of federal spending.”

The Biden administration hopes to have this bill passed before September, but, given the current, hyper-partisan Congress, the specifics of the bill are expected to undergo changes based on extended negotiations, even if the Democrats ultimately opt to force the bill through a narrow-party line vote, rather garner broader, bi-partisan participation.

Plus, this proposal is just the first half of a broader spending plan the President intends to introduce. The second part would include tax increases on high-earning individuals, to help pay for social-welfare programs. It’s expected to be unveiled at a later date.

While Biden’s proposal offering additional stimulus was at least partially the catalyst for last week’s record-breaking rally, we don’t expect it to have a dominant bullish impact on stocks over the long run. Given that spending would be incrementally executed within the next eight years, the higher estimated economic growth will likely be priced in at the early stage of such an undertaking.

On the other hand, some economists may question the philosophy of increasing taxes, which is seen to disincentivize business investment and growth, as politicians suck the life out of reasearch and development funding, sapping ingenuity. Of course, a counter-argument would be that much of the 2017 repatriated cash and tax savings by corporations didn’t go to R&D spending anyway—the funds were used simply to make shareholders richer, as companies initiated share buybacks and increased dividends, which didn’t necessarily benefit the economy in any way.

Could increasing taxes on multinational firms drive them away from the US to places offering low to no taxes, in order to benefit local employment and spending?Time will tell.

While historical analysis indicates economic expansion and stock acceleration occur despite tax hikes, it’s notable that data going back to the 1950s may be obsolete in a globalized market. As opposed to the golden years for the US after WWII when America was the sole economic player, considerable competition now exists, not least from China.

Bottom line: though we don’t take for granted that this incredibly massive spending plan will benefit the US economy, we do expect it will buoy the confidence of a country and world coming out of the worst global crisis in a century.

Short- to medium-term, the technical charts support this view. 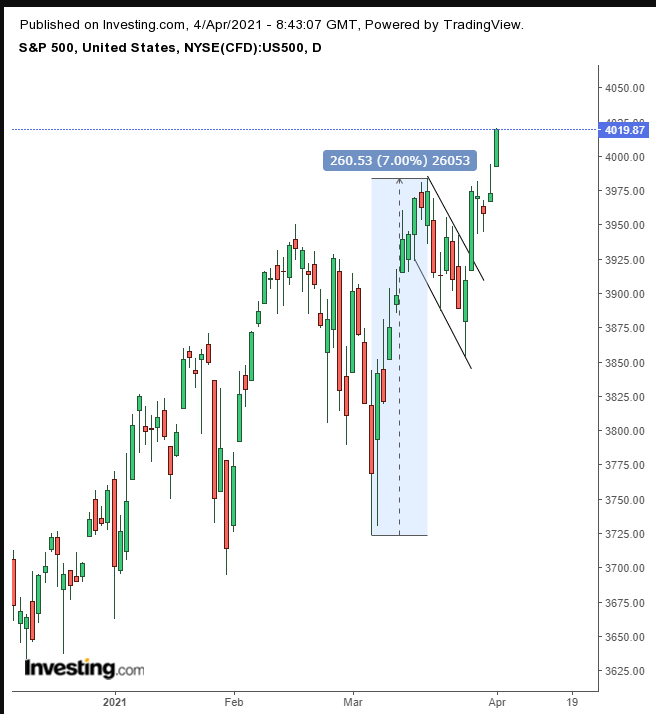 However, we can expect a potential return-move, since rising Treasury yields hit resistance on Tuesday. 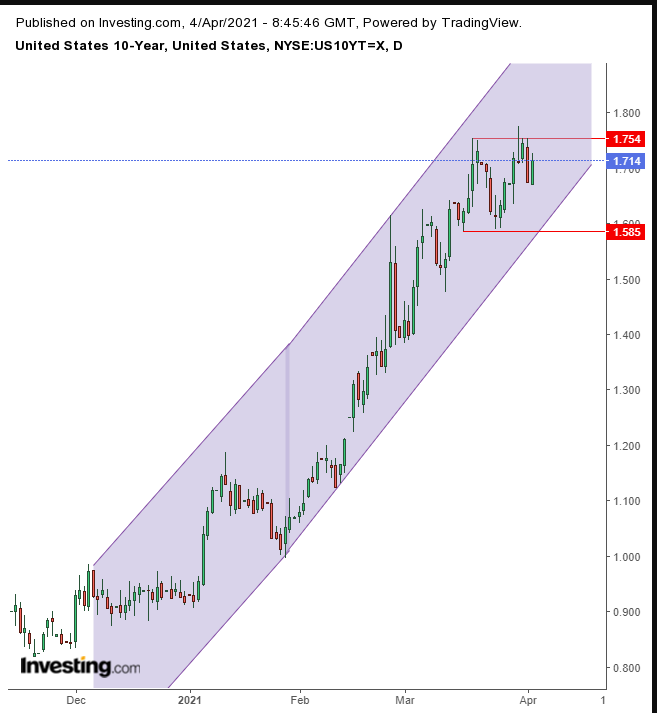 Rates on the were stuck at resistance by last week’s extreme shooting star, confirming the resistance of the Mar. 18 high. A drop below 1.585 would complete a double top. For now, rates remain within a bullish channel.

The came under pressure last week, as traders cashed out after the second leg in a rally, which was divided by a bullish flag. 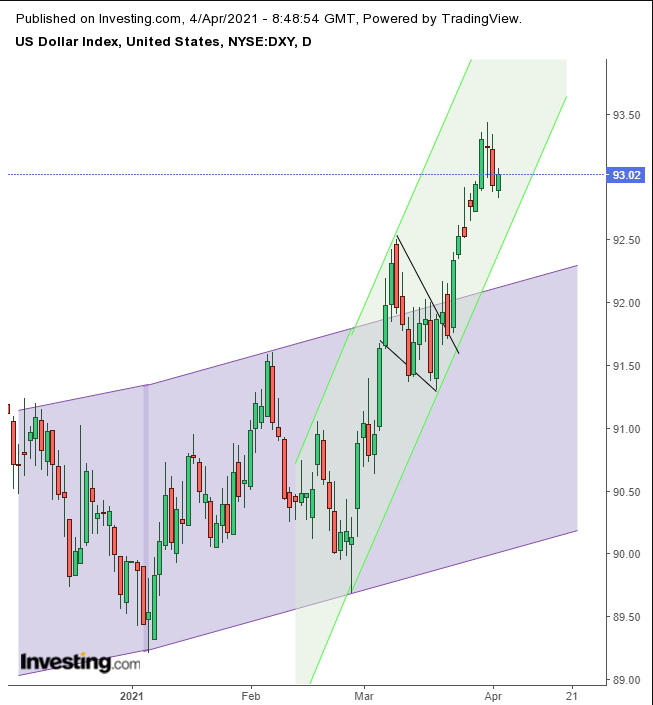 The greenback may now test the bottom of its current rising channel. However, it’s so narrow, we wouldn’t be surprised if it only found sufficient demand at the top of the previous, broader rising channel. It’s important to note though that the impetus for the global reserve currency remains higher, since it’s still in an uptrend, having bottomed after completing a massive falling wedge since the March peak.

If the USD does correct, is still . 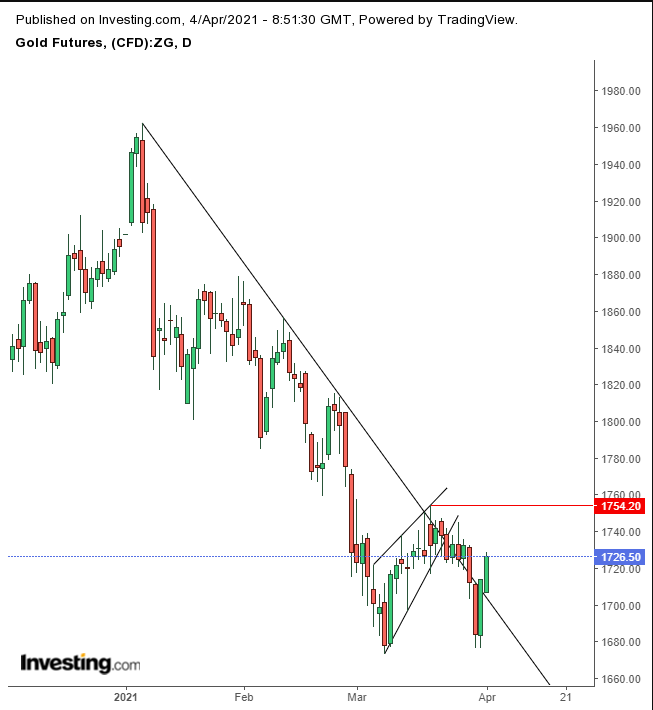 That will be the case if the yellow metal crosses above $1,760.

dropped on Saturday, even after holding up Friday when gold fell. 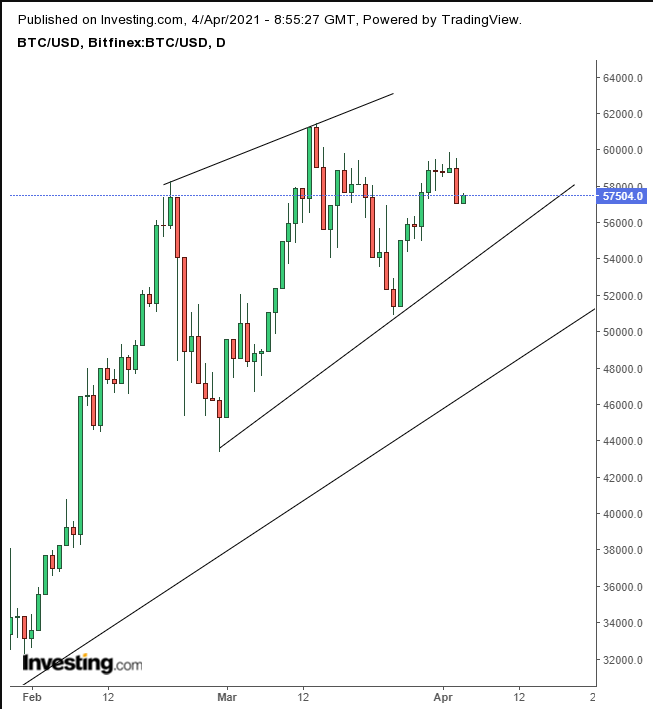 The move confirmed a shooting star. The only question is whether moves during weekend trade, when volume is thin, statistically represent the market’s ‘will.’ If it does, the leading cryptocurrency by market cap will likely retest the bottom of its current rising channel, whose top it failed to reach. And if that doesn’t hold, a possible return to its uptrend line since December is in the cards.

Despite the vaccine rollout and massive stimulus—both of which should boost the price of —we remain on the commodity. 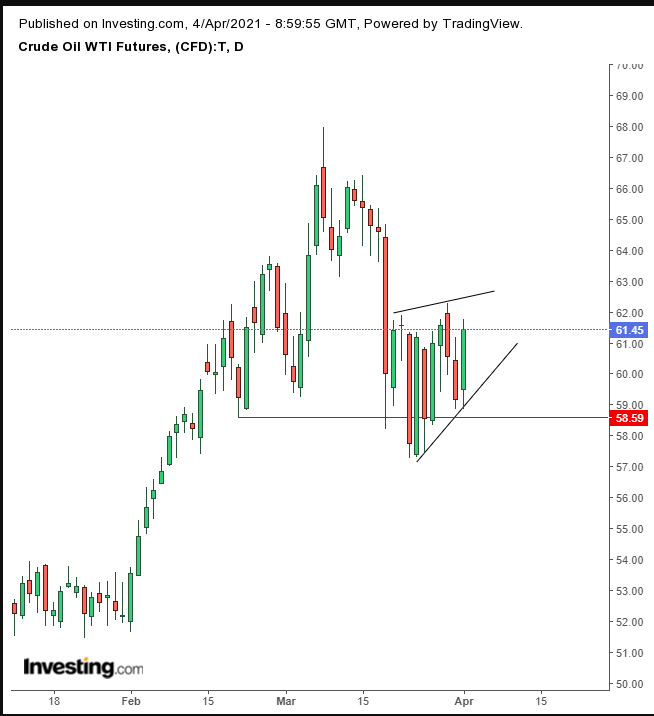 The price is developing a highly congested bearish flag, whose downside breakout will complete a H&S top.

Easter Monday holiday in many countries, including the UK, Germany, Italy, France, Australia and New Zealand; Public Holiday in Hong Kong and China.