Even after the four major US indices all hit new records on Friday, equities are expected to keep gyrating chaotically in the week ahead on continually flipping market sentiment. The catalysts? Rampant COVID-19 outbreaks that will pressure stocks by driving new lockdowns, versus hopes that a new government stimulus package will boost the US economy along with shares.

On Friday, a single day record for new cases was set in the US, with 228,407 fresh diagnoses nationwide. That followed Thursday’s new record of fatalities, 2,879 deaths, with the number of coronavirus patients admitted to hospitals across the country surpassing 100,000. President-elect Joseph Biden had already warned of a dark winter, and the US’s top infectious disease official, Dr. Anthony Fauci, previously warned that “January is going to be terrible.”

As intensive care units in California are reaching peak capacity, the state’s Governor stricter stay-at-home orders affecting Southern California and the San Joaquin Valley, a well as the Bay area, which includes San Francisco. The orders will go into effect on Sunday at 11:59 PM local time.

Still, the , , the and the each closed at new all-time highs, the first time since January 2018 that all four indices made new records on the same day. Even the tech-heavy —which recently endured a selloff, as investors dumped previously leading tech shares in favor of lagging value stocks—registered a new record close, though it didn’t achieve an all-time high to finish out the trading week…that occurred on Thursday, together with the S&P 500 which then hit another record on Friday.

Such ‘harmonized convergence’ is considered exceptionally positive, since each benchmark confirms the others’ bullishness. 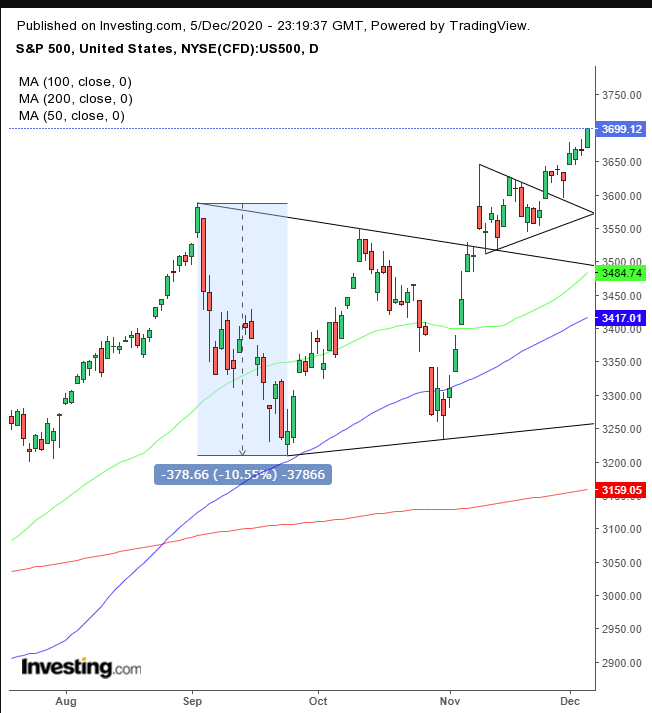 The S&P achieved less than half of its symmetrical triangle’s , leaving room for momentum to run the price up to 3,900 before it would lose steam.

All of which is particularly ironic given that at the close of the trading week, the Labor Department’s monthly report revealed that jobs growth for November increased less than anticipated, by 245,000, from October though 469K had been eyed, and the slid 0.2% to 6.7%. The declined as well, indicating that a greater number of Americans are no longer in the labor force.

Markets boosted by hopes of quantitative easing as weekly and monthly data plummet indicates traders are celebrating a weakening economy, as they count on a short-term quick fix from the Fed. On the other hand, President-elect Biden characterized the read as “grim” and called on Congress to approve new stimulus since “there’s no time to lose.” Though recent market history demonstrates no correlation between political rhetoric and economic events, Friday’s results would indicate that investors bought into it this time.

More ‘stimulus-speak’ came from House Speaker Nancy Pelosi, who insisted “there is momentum” by lawmakers from both sides of the aisle on a $908 billion bill. She said she and Senate Majority Leader Mitch McConnell talked about attaching a stimulus package to an omnibus spending bill the two parties are each ironing out to avoid a government shutdown come on Dec 11.

Will ongoing coronavirus woes solidify expectations for another fiscal aid package, driving traders to bid up stocks to new, as-yet-unexplored heights or will there finally be a breaking point on a stark economic outlook? We can’t know, of course, particularly if you add Fedspeak and fresh vaccine news to the mix. One thing is almost certain though: anticipate a bumpy ride ahead.

As stocks soared, investors dumped Treasuries, pushing yields, including for the note, to their highest levels in nine months. 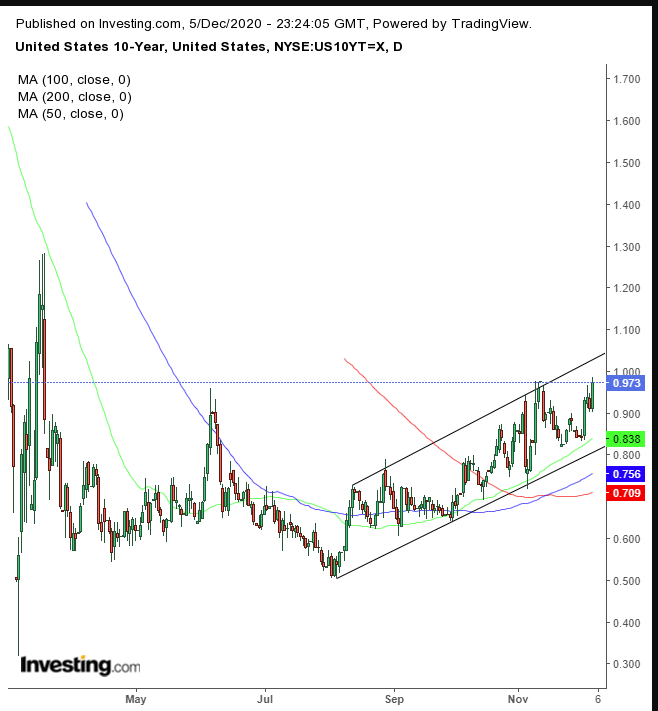 The disappointing employment numbers stretched the horizon on the Fed’s all-time low interest rates, triggering the selloff. Rates were buoyed to 0.973, the highest since Mar.19, along their rising channel.

The extended its decline, suffering the worst weekly performance in five weeks. If more money is pumped into the economy, the value of the USD would be watered down. 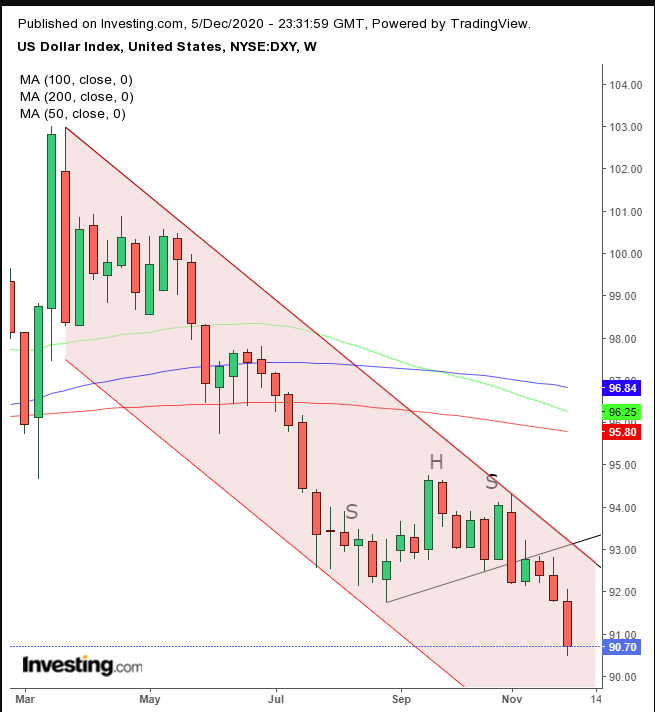 The dollar dropped for the third week in a row, after completing the return move of a H&S continuation pattern. The 50-Week MA, which already crossed below the 100-Week MA, is making its way to the 200-Week MA.

jumped last week, in another twist after it hit its Aug. 8 all-time high. 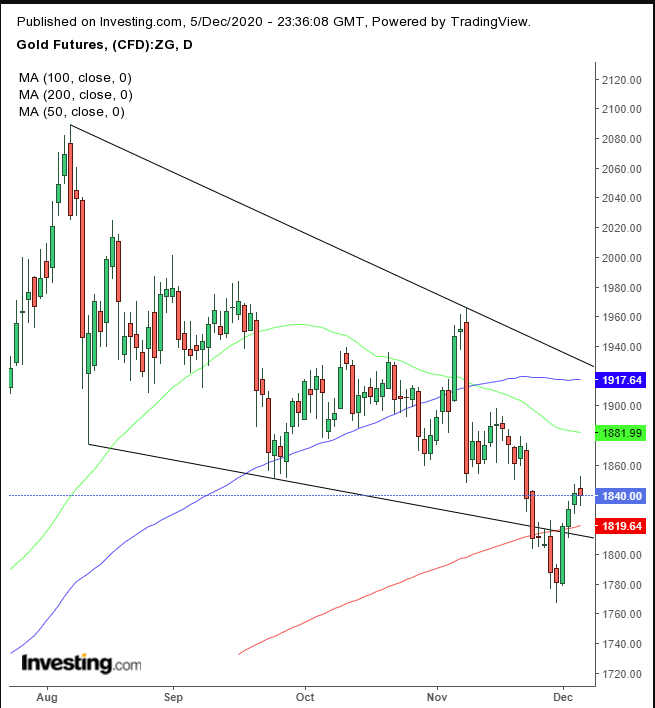 The precious metal is now back above the 200 DMA and back into a pattern, which means it could retest the top, above 1,900.

A report from Bloomberg sees hitting $50,000 in the new year. Alternatively, NYU Stern School of Business Professor Nouriel Roubini believes Bitcoin has no fundamental value and thinks the cryptocurrency’s price is being manipulated. 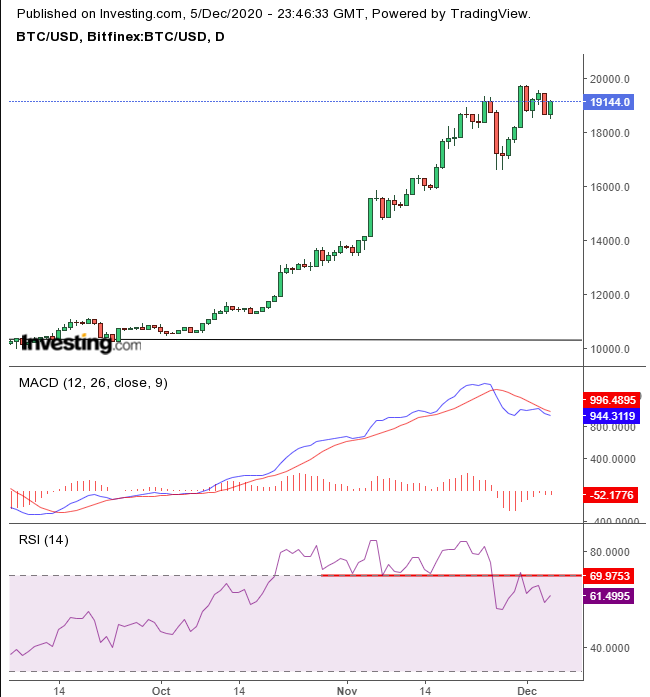 The digital currency has been rising over the weekend, regaining most of Friday’s 4.1% loss, after nearing the $19,891 all-time high registered on Dec. 12, 2017. After achieved , its MACD and RSI are now providing sell signals.

Oil gained 1.4% on Friday, its third straight advance, for a total gain of 3.8% after OPEC+ finally to increase production in 2021, albeit more gradually than planned. 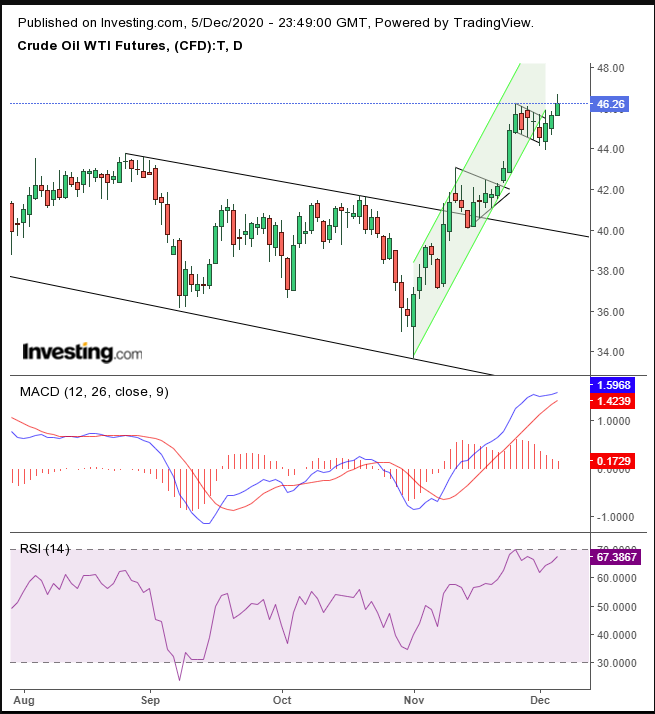 WTI provided to complete the falling flag, bullish after the preceding sharp rally and a signal for another leg higher.