Equities rose, while the and the Japanese slid on Tuesday, as investors turned their attention back to developments surrounding a potential COVID-19 vaccine. What may have also lifted sentiment is the testimony of Fed Chief and Treasury Secretary , where the two officials agreed on more support for small businesses. On top of that, a group of US Congress members proposed a virus relief package in a bid to pass it sometime this month.

The US dollar traded lower against all but two of the other G10 currencies on Tuesday and during the Asian session Wednesday. It lost the most ground against EUR, SEK, and CHF in that order, while it was found virtually unchanged versus AUD and JPY. 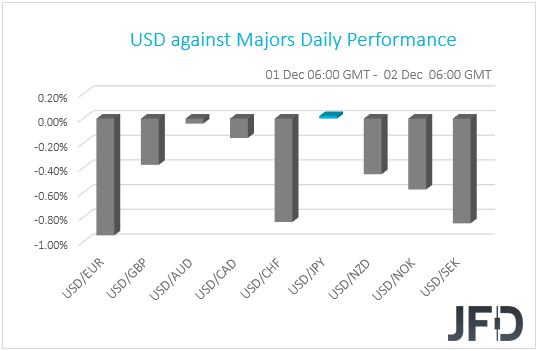 The weakening of the US dollar and the Japanese yen suggests that financial markets traded in a risk-on fashion. However, the strengthening of the and the weakening of the point otherwise. Thus, in order to get a clearer picture with regards to the broader market sentiment, we prefer to turn our gaze to the equity world. There, major EU and US indices were a sea of green, with the and hitting fresh record highs. That said, investors’ morale softened during the Asian session today. Although South Korea’s gained 1.58%, Japan’s , China’s and Hong Kong’s traded virtually unchanged. 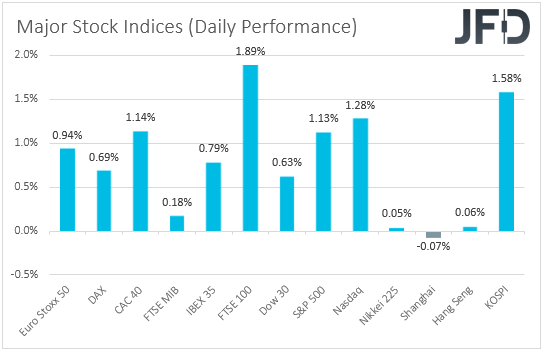 It seems that following Monday’s profit taking and portfolio rebalancing, market participants turned their attention back to the positive developments over a potential coronavirus drug. Pfizer (NYSE:) and BioNTech (NASDAQ:) have already sought emergency approval from the European regulator of their vaccine candidate, while Moderna (NASDAQ:) announced that it would also ask for conditional approval.

Apart from vaccine hopes, what may have also fueled market sentiment is the testimony of Fed Chair Powell and Treasury Secretary Steven Mnuchin before the Senate Banking Committee. Both officials agreed to provide more help for small businesses as the economic relief following the distribution of a vaccine may not arrive in time to keep them from failing. Although Democrats said that Mnuchin’s decision to shut Fed’s emergency lending programs seemed to contradict his call for help, Powell agreed that at this point businesses may need outright grants from the government, instead of piling on more debt. He also agreed that a separate Treasury fund could be used by the incoming administration of President-elect Joe Biden to re-establish the Fed lending programs if they are needed.

On top of that, Mnuchin held talks with House Speaker Nancy Pelosi over a potential fiscal aid, while a bipartisan group of senators and House members proposed a USD 908bn worth of coronavirus relief package, in a bid to pass a bill sometime this month. US Senate leader Mitch McConnell also raised the importance of including a fresh wave of coronavirus stimulus in a must-pass spending bill aimed at avoiding a government shutdown in the midst of the pandemic.

All this are in line with our view. Remember that yesterday, despite Monday’s setback in equities, we remained positive over the broader market sentiment. We based our view on the positive developments surrounding a potential coronavirus vaccine, while headlines pointing to more fiscal and monetary policy support add more credence. We stick to our guns that equities and other risk-linked assets are likely to continue marching north, while safe-havens, the likes of the US dollar and the Japanese yen, could stay under selling interest.

continues to balance above a short-term upside support line taken from the low of Nov. 9, but at the same time it struggles to overcome the 3538 resistance barrier, which is the highest point of November. For now, we will take a somewhat positive approach, because in order to get comfortable with the upside idea, we need to see a push above the 3538 zone first.

If, eventually, the index does move and stay above that 3538 zone, this will confirm a forthcoming higher high, possibly clearing the path to some higher resistance areas, where one of those could be at 3597. That hurdle is marked by the high of Feb. 26. That said, if the buyers see that hurdle only as a temporary obstacle on the way higher, its break might open the door for a push to the 3676 level, marked by the high of Feb. 25

Alternatively, if the aforementioned upside line breaks and the price falls below the low of Nov. 30, at 3476, that could attract a few more sellers into the game. Euro Stoxx 50 might then drift to the 3438 zone, a break of which may set the stage for a test of the 3395 and 3380 levels. Those levels are marked by the low of Nov. 12 and an intraday swing low of Nov. 9 respectively.

Yesterday, we finally saw breaking and staying above the psychological 1.3400 area. This move could be seen as a positive one, as it increases the pair’s chances for a further move north and more buyers may join in if the rate will remain above that 1.3400 zone. For now, we will take a positive approach.

This morning we are seeing a small correction lower, however, if the pair stays above that 1.3400 area, the buyers could step in and drive GBP/USD to the next potential resistance hurdle, at 1.3482. That hurdle is marked by the highest point of September, which might temporarily halt the upmove. That said, if the buyers are still feeling a bit more comfortable than the bears, a break of that 1.3482 zone may lead GBP/USD to the 1.3514 level, marked by the highest point of December 2019.

In the US, besides the second round of Powell’s and Mnuchin’s testimony, we also have the ADP for November. The private sector is forecast to have gained 400k jobs, after adding 365k in October. This could raise speculation that the , due out on Friday, may also exceed October’s number, which was at 638k. That said, as we noted several times in the past, the ADP print is far from a reliable predictor of where the NFPs may come in. Even last month, when the ADP slowed to around half (to 365k from 749k), NFPs stayed close to their September figure (638k vs 672k).

The EIA on crude oil inventories is due to be released as well, with the forecast pointing to a 2.358mn barrels fall after a 0.754mn slide the week before. That said, bearing in mind that the revealed a 4.146mn barrels increase, we would consider the risks surrounding the EIA report as tilted to the upside. In any case, this week, oil traders are likely to keep their gaze locked on the outcome of the OPEC+ meeting, where members will decide whether to increase production, or extend the existing curbs.

As for the speakers, apart from Powell and Mnuchin, we have four more on the agenda. Those are Fed Board Governor Randal , New York Fed President John , ECB Chief Economist Philip , and BoE MPC member Jonathan .