The rallied, in tandem with the rise in Treasury yields, something that forced equities to retreat again. Alongside the US dollar, the was the other big winner among the G10s, coming under buying interest after the UK finance minister that the economy will recover faster than previously though. As for today, the main event may be the OPEC+ decision, with yesterday’s sources suggesting that the group will carry the existing curbs into April.

The US dollar traded higher against all but one of the other G10 currencies on Wednesday and during the Asian session Thursday. It gained the most versus , , and , while it was found virtually unchanged against GBP. 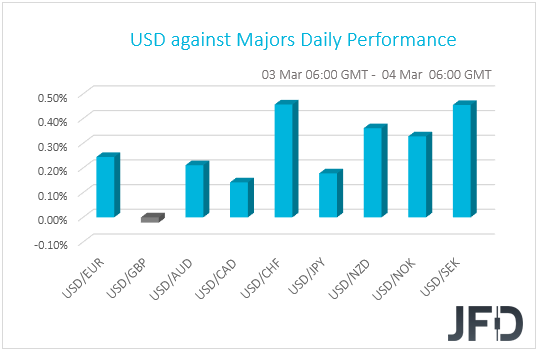 The strengthening of the US dollar may have been the result of another rise in bond yields, which suggests that equities may have slid once again. Indeed, turning our gaze to the equity world, we see that, although major EU indices ended their session mixed, the US and Asian ones closed in negative waters. In any case, this barely changes our view. We stick to our guns that, even if the retreat continues for a while more, equities may eventually rebound as investors start to digest that any spike in inflation this year may prove to be temporary. 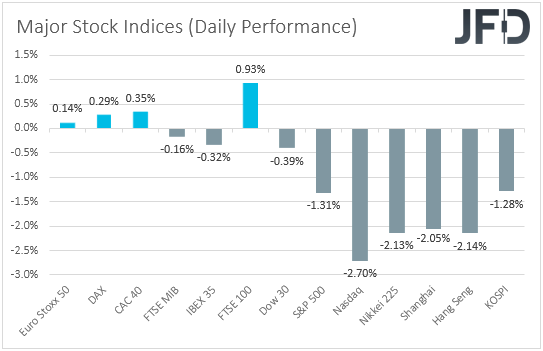 Back to the FX world, the pound was the top gainer among the G10s, alongside the US dollar. Yesterday, UK finance minister Rishi Sunak announced a GBP 65bn of extra stimulus in order to support the nation’s pandemic-hit economy. Although this was largely anticipated, what may have come as pleasant news for GBP traders was his statement that the UK economy will regain its pre-pandemic size in the middle of 2022, six months earlier than previously forecast. This is inline with our view that following the Brexit accord and the BoE’s decision to push back the idea of negative interest rates, the fast vaccination program may allow GBP traders to continue buying pounds.

Now, passing the ball to the energy market, today, OPEC and major non-OPEC oil producers meet to decide on oil output. OPEC and its allies, known as the OPEC+ group, cut output by 9.7mn bpd last year due to the pandemic hitting demand hart, and as of February, it is still withholding 7.125mn bpd. Initially, expectations were for a modest increase of 500k bpd, starting in April, but yesterday, sources told Reuters that the group is considering rolling over the existing production cuts into April. Perhaps this was the reason why oil prices rebounded. With that in mind, no action may allow oil prices to continue trending north, while any increase beyond 500k may raise concerns over an inventory build up and thereby be the reason for oil prices to correct lower.

continues its journey north, while currently trading above a short-term tentative upside support line taken from the low of Feb. 26. Even though the pair seems to be showing willingness to move higher, we would prefer to wait for a pop above the 149.70 hurdle first, which is yesterday’s high. Until then, we will remain somewhat positive with the near-term outlook.

If the break above the 149.70 barrier occurs, more bulls could run into the field, this way pushing the pair further north. GBP/JPY might then travel to the 150.44 zone, which is the highest point of February. The rate may get halted near that area, or even correct back down a bit. However, if it stays above the aforementioned upside line, new buyers might join in. If so, they may be able to raise the pair to the 150.44 hurdle again, a break of which would confirm a forthcoming higher high and send GBP/JPY to the 150.85 level, marked by the high of Apr. 30, 2018.

On the downside, if the previously discussed upside line breaks and the rate falls below the 148.88 territory, marked near an intraday swing high of Mar. 2 and an intraday swing low of Mar. 3, that could spook the bulls from the field temporarily. The pair might drift to the current lowest point of March, at 148.11, a break of which may set the stage for a test of the 147.40 level, marked by the low of Feb. 26.

After a recent decline, managed to reverse back up again and make its way above all of its EMAs on our 4-hour chart. In addition to that, the commodity is currently trading above a short-term tentative upside support line taken from the low of Feb. 1. Because the price is still trading above that upside line, the trend remains to the upside. But because Brent oil was rising steeply from the beginning of November 2020, and we still have not seen a strong correction lower, we will take a cautiously-bullish approach, at least for now.

This morning, we are noticing that the price is already balancing slightly above yesterday’s high, at 65.26. This may attract a few more buyers into the game, possibly sending the commodity further north, where the next possible target could be at 66.52, marked by the current highest point of March. If the buying doesn’t stop there, the next possible target could be at 67.52, which is the highest point of February.

Alternatively, a break of the previously discussed upside line and a price-fall below the 62.96 hurdle, marked by the current lowest point of March, may invite more bears into the field, as such a move would confirm a forthcoming lower low. Brent oil may travel to its next support area between the 62.12 and 61.76 levels, marked by the low of Feb. 19 and the high of Feb. 10 respectively. However, if the sellers are still feeling strong, they could easily drag the “black gold” towards the 200 EMA, or to the 60.46 zone, marked by the low of Feb. 12.

During the European morning, we get the UK for February, which is expected to have risen to 51.0 from 49.2, as well as Eurozone’s for January, which are forecast to have slid 1.1% mom after rising 2.0% in December.

Later, from the US, we have the for last week and expectations are for a small increase to 750k from 730k the week before. for January are also due to be released and the forecast points to an acceleration to +2.1% mom from +1.1%.

As for the speakers, we have only one on today’s agenda and this is Fed Chair Jerome Powell. We recently heard from him, when testifying before Congress, and thus we don’t expect him to deviate from what we already know. When testifying, he clearly said that any spike in inflation above 2% in the months to come is likely to prove to be temporary and that the Fed will not tighten policy in response to that. He noted that inflation will rise and stay above 2% for some time—the goal for beginning normalization—in the years after 2023.