Most major EU and US indices traded higher yesterday and today in Asia, as investors maintained hopes over more fiscal support under a Biden Presidency. What also helped the broader appetite may be comments by Fed officials, who pushed back the idea of the Fed tapering its QE program any time soon.

The rebounded and traded higher against all but one of the other G10 currencies on Wednesday and during the Asian session Thursday. It gained the most versus , , , and NZD in that order, while it gained the least ground versus AUD and . The greenback underperformed only against . 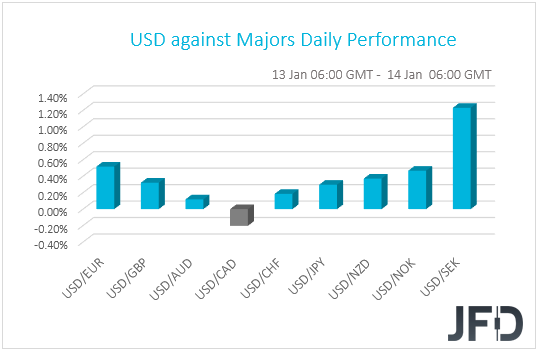 The strengthening of the US dollar and the weakening of the risk-linked suggest that markets traded in a risk-off fashion yesterday and today in Asia. However, the relative strength of the and the points otherwise.

Thus, in order to get a clearer picture with regards to the broader market appetite, we prefer to turn our gaze to the equity world. There, most major EU and US indices closed in the green, with the exceptions being UK’s and Wall Street’s , which slid 0.13% and 0.03% respectively. The positive picture rolled somewhat over into the Asian session today as well. Although China’s slid 0.91%, Japan’s , Hong Kong’s , and South Korea’s gained 0.85%, 0.61%, and 0.05%. 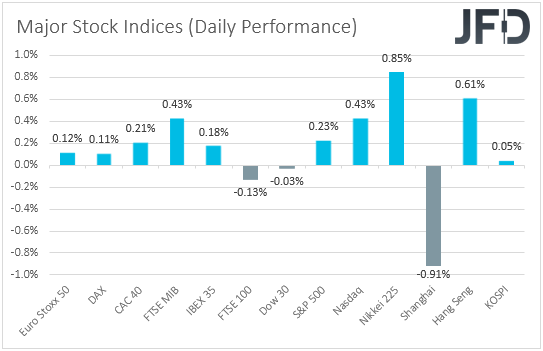 It seems that investors maintained hopes over more fiscal support under a Biden Presidency in the US, with the extra-loose monetary policy around the globe also allowing buying of risk-linked assets. What may have also helped, especially yesterday, may be comments by Fed officials, including Loretta , Esther , and James , who pushed back the idea of the Fed tapering its QE program any time soon. This means that the Fed will keep its monetary policy extra accommodative, even with headline inflation rising more than expected in December. Remember that the Fed wants inflation to rise above 2% for some time, so that it averages 2% over time. With both the and CPIs still below that mark, we stick to our guns that the Fed is likely to stay ready to do more if the situation suggests so.

All this is in line with our view for higher equities and a weaker dollar in the first months of 2021. However, given the overstretched rally in equities, we cannot rule out a setback. Following the storming of the U.S. Capitol, the House of Representatives voted yesterday to impeach Donald Trump, making him the first US President to be impeached twice.

The Senate is unlikely to proceed with a trial before he leaves office, but even if he has left, a conviction could lead to a vote on banning him from running for office again. All this process may delay incoming President Joe Biden’s agenda, which means delays in stimulus and spending plans.

Concerns on that front may result in a pullback in equities, but we don’t expect this to last for long as we do expect more stimulus to eventually be unleashed. On top of that, we expect Biden to adopt a softer stance on global trade than Trump did, which could also benefit the broader investor morale.

is still trading above a short-term tentative upside support line taken from the low of Dec. 11. At the time of writing, the German index is hanging around the psychological 14000 mark. If it continues doing that, there is a chance to see the price pushing higher again. For now, we will remain somewhat positive.

A push higher, away from the psychological 14000 mark, could bring the price to its all-time high, at 14134, which might stall the uprise temporarily. That said, if the bulls are still feeling confident, a further move higher would result in a break of the 14134 hurdle, a confirmation of a forthcoming higher high, while placing DAX into uncharted territory.

In order to shift our attention to the downside, a break of the aforementioned upside line is required. In addition to that, to slightly strengthen the bearish case, a price-drop below the 13804 zone, marked by the current low of this week would be needed. DAX may end up sliding to the 13729 obstacle, a break of which could set the stage for a move to the 13564 level, marked by the current lowest point of January.

continues to trade above a short-term upside support line drawn from the low of Dec. 21. Although the current trend is still to the upside, in order to get a bit more comfortable with the upside scenario, we would like to see a push above yesterday’s high first, which is at 0.7239. Hence our cautiously-bullish approach for now.

If, eventually, we do see a push above the 0.7239 hurdle, this may attract more buyers into game, as a forthcoming higher high would be confirmed. NZD/USD could then rise to the high of Jan. 8, at 0.7281, or even to the current highest point of January, at 0.7315.

Alternatively, a break of the aforementioned upside line and then a drop below the 0.7166 zone, marked by yesterday’s low, may signal a change of the current short-term trend, potentially opening the door for further declines. NZD/USD might slide to its next possible support area between the 0.7139 and 0.7146 levels, marked by the high of Dec. 28 and the low of Jan. 11 respectively. If that territory is just seen as a temporary pit-stop for the bears, the next move might be towards the 0.7083 area, which marks the low of Dec. 28.

The calendar appears very light today, with the only data worth mentioning being the US for last week, which are expected to have risen slightly, to 795k from 787k.

We do however have three Fed speakers on the agenda. Those are Chair Jerome , Atlanta President Raphael , and Dallas President Robert . Following comments by several of their colleagues against the idea of QE tapering anytime soon, it would be interesting to listen what these officials have to say on monetary policy.