This week appears to be a relatively light one. We don’t have any central bank decisions on the agenda, while the most important data releases may be Eurozone’s preliminary CPIs for March, and the US employment report for the month. We also have an OPEC meeting, but we don’t expect any action. We believe that the Cartel and its allies will roll over their current supply curbs into May.

On Monday, there are no major economic releases or indicators on the agenda.

On Tuesday, during the Asian morning, Japan’s data for February is coming out. The unemployment rate is forecast to have ticked up to 3.0% from 2.9%, while the jobs-to-applications ratio is expected to have held steady at 1.10. for February are also due to be released and expectations are for the yoy rate to have fallen further into the negative territory. Specifically, it is forecast to have fallen to -2.8% from -2.4%.

During the European session, Germany’s preliminary inflation data for March is coming out. Both the and rates are forecast to have increased to +1.7% yoy and +2.0% yoy, from +1.3% and +1.6% respectively. This is likely to raise speculation that Eurozone’s headline inflation, due out on Wednesday, may also accelerate.

On Wednesday, Asian time, Japan’s preliminary for February is forecast to have fallen 1.2% mom, at a faster pace of decline than January’s -1.0% mom. The official Chinese PMIs for March are also coming out, but no forecast is currently available. The Chinese PMIs have been trending lower recently, and another decline in March may highlight that the world’s second largest economy is not recovering at the desired pace, something that could hurt the currencies of the nations that have close trade ties with China, the likes of Australia and New Zealand. 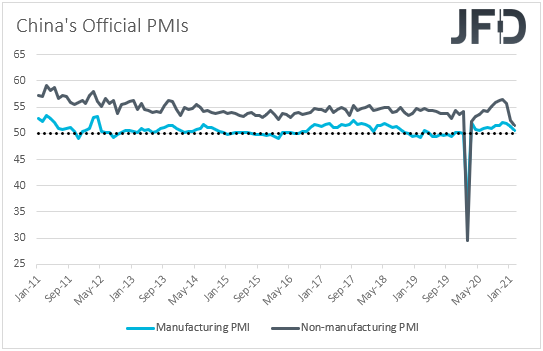 In the early EU session, the final UK for Q4 is coming out and expectations are for the final print to confirm its preliminary estimate of +1.0% qoq. Eurozone’s preliminary CPIs for March are also due to be released. The rate is expected to have risen to +1.3% yoy from +0.9%, while no forecast is available for the Core rate. However, the excluding energy and food rate is anticipated to have stayed unchanged at +1.2% yoy.

At its latest meeting, the ECB decided to accelerate its Pandemic Emergency Purchase Program in order to stop any unwarranted rise bond yields. Under normal circumstances, rising inflation may have lessened the likelihood for more easing by this Bank. However, with underlying inflation staying subdued and most officials around the globe suggesting that any spike in headline inflation in the months to come is likely to prove to be temporary, we see the case for the ECB to keep the door for more action wide open. Therefore, we don’t expect the to gain much on a potential jump in headline inflation. On the contrary, due to the fresh lockdowns in Eurozone, and the slow vaccination process in the bloc, we may see it extending its recent slide. 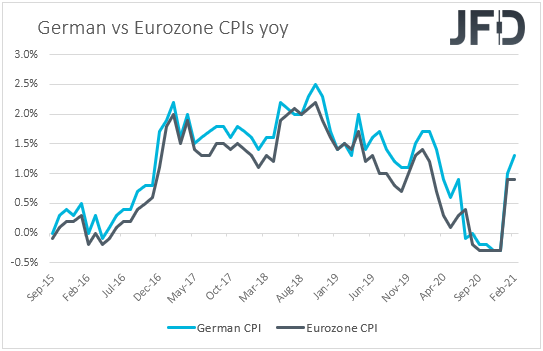 Later in the day, the US report for March is coming out, as well as Canada’s monthly for January. The ADP report is forecast to show that the private sector has gained 525k jobs, much more than February’s 117k. This is likely to raise speculation that Friday’s s may beat their own forecast of 182k. Canada’s GDP is expected to have accelerated to 0.5% mom from 0.1%.

Later in the day, we have the final Markit Manufacturing PMIs for March from the , the , and the , which are expected to confirm their preliminary prints, as well as the US’s for the month, which is anticipated to increase to 61.3 from 60.8, underscoring the fast recovery of the world’s largest economy.

With regards to the energy market, we have a meeting between OPEC and major non-OPEC members, known as the OPEC+ group, where they will decide on output production. Growing concerns about global demand due to a resurgence of covid infections has been weighing on oil prices recently and thus, we see the case for OPEC and its allies to roll over their current supply curbs into May. This, and a potential improvement in market sentiment in the foreseeable future, may bring an end to the corrective phase in oil prices.

Finally, Friday is Good Friday in most nations under our radar, and thus, their respective markets will stay closed. The only markets that will stay open are the Japanese and Chinese ones.

That said, although US markets wills stay closed, we do get the US employment report for March. Nonfarm payrolls are expected to have slowed to 182k from 379k in February. However, bearing in mind that the ADP is expected to reveal that the private sector has gained 525k jobs, we see the risks surrounding the NFPs as tilted to the upside. No forecast is available for the unemployment rate, while average hourly earnings are expected to have inched up 0.2% mom, the same pace as in February. This is likely to drive the yoy rate down to 4.5% from 5.3%. 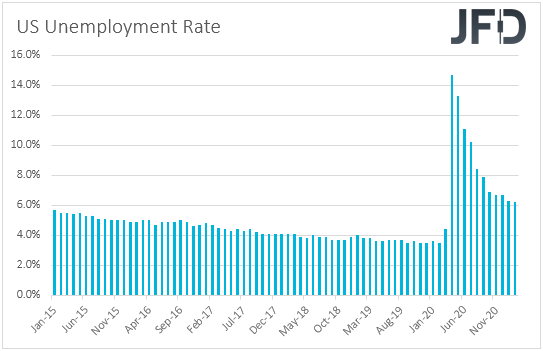 A decent report is likely to confirm that the US economy is recovering from the damages of the pandemic at a fast pace, but the question is whether this will revive fears of high inflation or not. If not, equities and other risk-linked assets are likely to gain, while safe havens, like the , are likely to come under selling interest. On the other hand, fresh inflation fears may result in the opposite market reaction. As for our view, we believe that the first case may be true as the Fed has clearly said that any spike in inflation in the months to come is likely to prove to be temporary, and that inflation will meet their goal in the years after 2023. Remember that at the press conference following the latest FOMC gathering, Fed Chair noted that it is too early to start discussing tapering QE, while the updated dot plot pointed to no rate hikes even in 2023.