EU indices traded unchanged or lower yesterday, but sentiment improved during the US session and was boosted even further during the Asian session today. It seems that the drivers behind the optimism may have been the better-than-expected US for last week, as well as US President Biden’s remarks that he would double his administration’s vaccination rollout plan.

The US dollar traded higher against the majority of the other G10 currencies on Thursday and during the Asian session Friday. It gained the most versus , , and in that order, while it underperformed only versus and . The greenback was found virtually unchanged against . 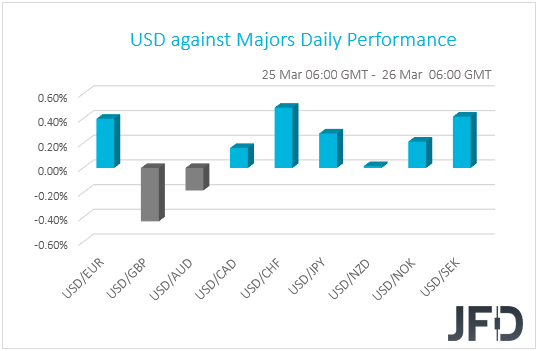 The strengthening of the greenback suggests that markets traded in a risk-off fashion yesterday. However, the relative strength of the risk-linked Aussie and Kiwi, combined with the weakness in the safe-haven franc, points otherwise. Thus, in order to get a clearer picture with regards to the broader market sentiment, we prefer to turn our gaze to the equity world. There, major EU indices traded unchanged or lower, but sentiment improved during the US session, with all three of Wall Street’s main indices closing in the green. Risk appetite was boosted even further during the Asian session today, with Japan’s and China’s gaining 1.56% and 1.63% respectively. 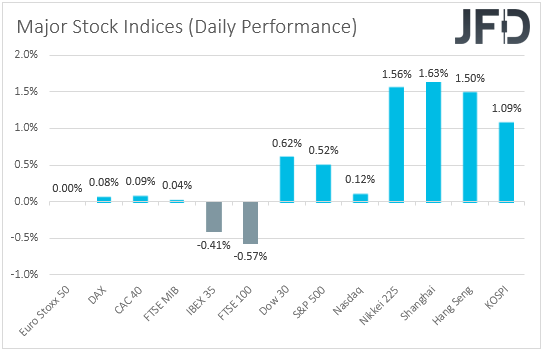 EU indices may have continued feeling the heat of the fresh lockdowns and the slow vaccination process, but in the US, the story was different. Investors were more confident to buy US stocks, perhaps as initial jobless claims for last week fell by more than anticipated, to a one-year low, confirming that the US economy is on the verge of stronger growth. The optimism intensified during the Asian session today, after US President Joe Biden said in his first formal news conference that he would double his administration’s vaccination rollout plan after reaching the previous goal of 100 million shots 42 days ahead of schedule.

As for our view, it has not changed. Yes, the fresh lockdowns in Europe, combined with worries over increasing taxes in the US, may weigh on market sentiment again. However, as we already noted, we would treat any new declines in equities as part of a corrective phase, and not a reversal. With most major central banks pledged to keep their respective monetary policies extra loose, we do see the case for the prevailing uptrends in equities to resume at some point in the foreseeable future.

The cash index traded lower yesterday during the European session but hit the upside support line drawn from the low of Jan. 31, and then, it rebounded. As long as the index continues to trade above that line, the short-term outlook could be considered positive, but before we get confident on larger advances, we would like to see a decisive break above the key resistance of 6730, which has been preventing the price from drifting higher since Monday.

If that barrier eventually breaks, investors may get encouraged to drive the battle towards the 6810 area, which provided resistance between Mar. 14 and 16. If the bulls are not willing to stop there this time around, a break higher would confirm a forthcoming higher high on the daily chart and may trigger extensions towards the 6905 territory, which is near the high of Jan. 8.

In order to abandon the bullish case, we would like to see a clear dip below yesterday’s low of 6615. This would also take the index below the aforementioned upside line and may initially open the path towards the low of Mar. 5, at 6550. Another break, below 6550, could carry larger bearish implications, perhaps setting the stage for declines toward the low of Feb. 26, at 6460.

traded higher yesterday, but hit resistance at 1.2630 and then, it pulled back. Overall, the rate continues to trade below the downside resistance line drawn from the high of Jan. 28, something that keeps the near-term outlook cautiously negative, but before we start examining the case for more declines, we would like to see a clear dip below 1.2545, a support marked by Wednesday’s and Thursday’s lows.

Germany’s for March is also coming out. The current assessment index is anticipated to have risen to 91.3 from 90.6, while the business expectations one is forecast to have inched up to 95.2 from 94.2. This is likely to drive the business climate index up to 93.2 from 92.4.

Later, in the US, is expected to have fallen 7.3% mom in February, after rising 10.0%, while spending is anticipated to have slid 0.7%, after improving 2.4%. The rate for the month, the Fed’s favorite metric, is expected to have held steady at +1.5% yoy. This is likely to ease further fears of higher inflation and thereby, it may allow equities and other risk linked assets to gain. The preliminary UoM consumer sentiment index for March is also coming out and the forecast points to a fractional increase to 83.5 from 83.0.