The rise in U.S. interest rates is refocusing minds and prompting attitude adjustments the world over, but most of the attention has been on the absolute increases in yields. To understand the changes on a deeper level, from a global perspective, it’s necessary to consider the relative shift, too.

Let’s start with the benchmark , perhaps the world’s most important interest rate, which continues to trend higher. The yield ticked up again yesterday, at 1.59% — another one-year-plus high (Mar. 8). 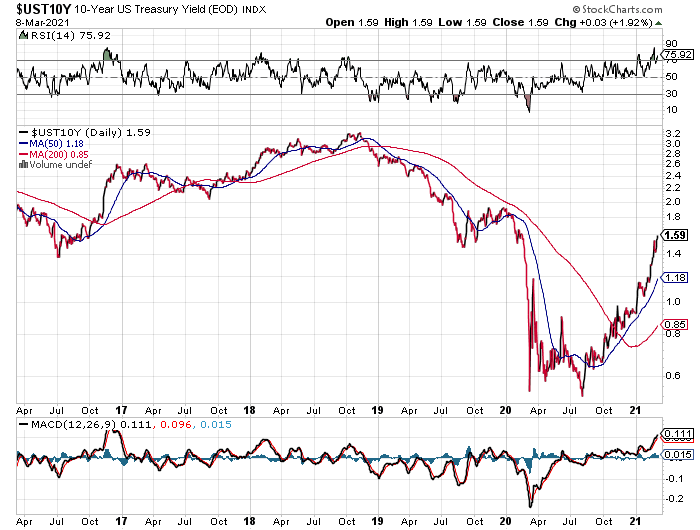 Less obvious is how the U.S. 10-year rate is changing relative to its foreign equivalents. Compared with several key benchmark rates in other countries, there’s also a clear upswing in progress. Consider how the U.S. 10-year Treasury yield compares with its German counterpart. In recent months, the U.S. rate premium on this front has surged roughly 80 basis points to 1.87 percentage points. That’s modest in context with history, but as a relative change in recent history it’s dramatic. Similar moves are also visible for the U.S. 10-year relative to equivalents in the UK and Japan. 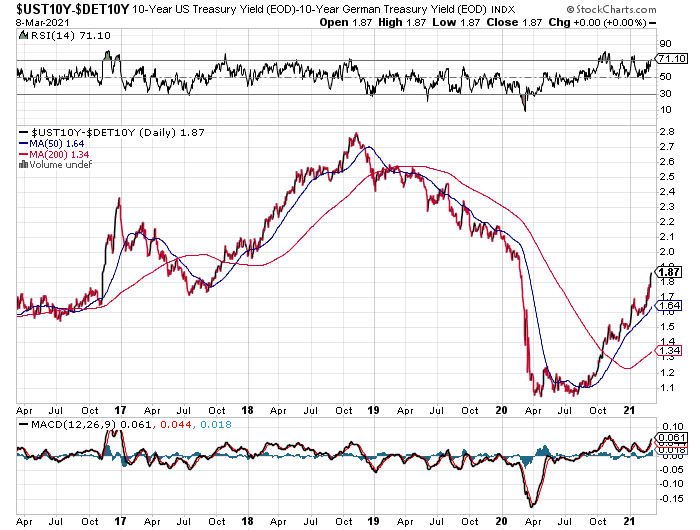 As the premium in U.S. interest rates rises, the effects ripple out into the global economy on multiple fronts. One is the upward influence on the U.S. dollar. Although the greenback has fallen sharply over the past year, the relative shift in favor of higher U.S. interest rates may be changing this trend. Consider the . This broad measure of the international value of the U.S. dollar via a basket of major currencies still appears to be trending down. But the recent pop is almost certainly driven by the rise in U.S. rates, which raises the appeal of dollar-denominated assets, including bonds. 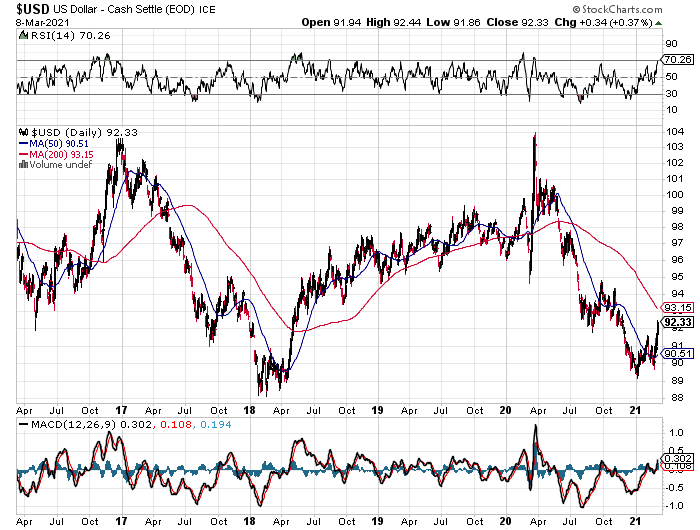 The repercussions of a rising U.S. yield premium relative are starting to show up on multiple fronts, including gold. Widely seen as alternative asset to the dollar, gold tends to be sensitive to changes in real (inflation-adjusted) rates and so it may be an early sign of wider changes afoot. With inflation remaining relatively low and stable (so far), real U.S. interest rates are climbing. No wonder, then, that gold prices are falling. The metal’s latest decline left the price at its lowest level in nearly a year.

Another way to look at gold prices is through the prism of how the U.S. 10-year rate compares in relative terms on an international basis. In the chart below, a clear negative correlation is visible between gold and the U.S. 10-year-yield premium over its German counterpart. The message: owning Treasuries is increasingly competitive versus the 0% yield on gold. 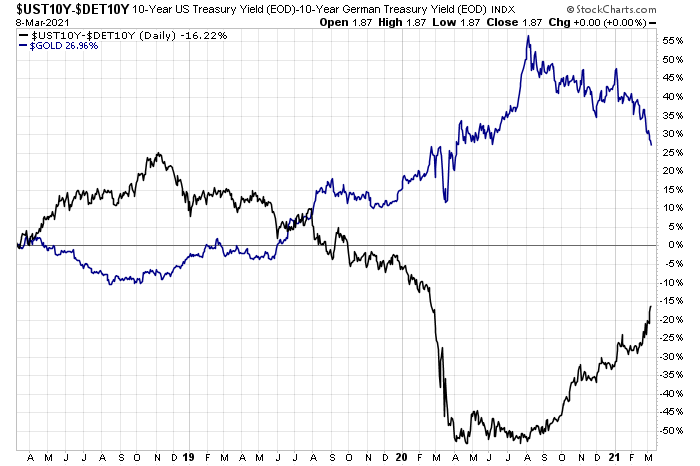 The macro factor that’s unleashing this change is what appears to be a growing imbalance in the world economy. As The Wall Street Journal reports today, “The U.S. will drive a sharp rebound in the world economy this year, but the strength of the American bounce could unbalance weaker economies, particularly in the developing world.”

According to the Organization for Economic Cooperation and Development, the rise in U.S. government bond yields in response to higher growth and inflation expectations could spark capital flight from emerging economies, where vaccine campaigns have barely begun and whose economic recovery is expected to take longer…

The divergence is starting to come into focus for the U.S. vs. China, too. With Congress on the verge of passing another huge stimulus/relief bill, China’s economic policy priorities are looking increasingly modest.

The divergence is also notable in central bank policies. “Unlike many of its peers, including the Fed, China’s central bank has continued to calibrate its policy partially with a view to prevent an excessive rise in asset prices,” says Frederic Neumann, co-head of Asian economics research at 0HSBC Holdings.

It’s unclear if all the shifting global economic forces are noise or the start of a longer-running change. Indeed, despite the current rebound in U.S. interest rates, the 10-year yield has to date returned to levels that prevailed in early 2020 – before the coronavirus crisis roiled the global economy.

But rates are now at a critical point. A key question: will yields continue to rise from current levels? Or, is the recent rate revival just a return to the state of “normal” that prevailed in the pre-pandemic period? Whatever the answer, there will be major macro repercussions in the months ahead. The U.S. 10-year Treasury yield has always been a crucial number for the global macro calculus. That power and influence, for good or ill, will be unusually potent in 2021.