Headline US inflation has risen from 0.2% YoY last May to 1.4% today and is likely to sail well above 3% in coming months. The Fed have said they will “look through” a temporary spike, but there is a growing sense that inflation could be stickier, potentially forcing them into earlier action on interest rates than they are currently signaling says, James Knightley

The January inflation report showed weaker price pressures than anticipated. While headline rose 0.3% month-on-month/1.4% year-on-year, the , which excludes food and energy came in at 0% rather than the 0.2% MoM rate expected. This leaves the annual rate of core inflation at 1.4%, down from 1.6% in December.

A benign outcome relative to expectations, which will allow Federal Reserve Chair Jerome Powell to strike a dovish tone when he speaks to the Economic Club of New York later today. This in turn will provide even more comfort for risk assets as we await another wave of fiscal stimulus.

While today’s figures are comforting, inflation is undoubtedly going to move higher in the months ahead. The key questions are how high and how long will it last?

Firstly, we know there will be “base” effects. Annual inflation compares the price levels in a specific month of 2021 to those of the corresponding month in 2020. The worst of the pandemic – late March to May last year – saw strict lockdowns with tens of thousands of businesses forced to close. Those that remained open saw little custom, aside from grocery and liquor stores, with prices being slashed to generate cashflow. Airline fares fell 30% in that period, with hotel prices dropping 15% and apparel declining 8% according to the CPI report.

With Covid containment measures having eased somewhat and demand returning, prices have recovered over the subsequent eight months. If price levels stay unchanged for the next four months the comparison with the depressed price levels of that heavily stressed March-May period means headline inflation is going to rise to 2.8% YoY. This is the bear minimum annual inflation will get to.

Given rising commodity and energy prices and rising freight costs that are still to work through to consumer prices this takes us closer to 3%. Then with the vaccine roll out process gaining traction, potentially paving the way for a fuller economic re-opening at some point in 2Q21, many businesses may take the opportunity to raise their prices.

This is most likely to happen in sectors that have experienced supply constraints such as the leisure and hospitality industry. Faced with less competition (bars and restaurants having gone out of business, hotels having closed and aircraft mothballed) at a time when customers are desperate to experience things they haven’t been able to do for 12 months, pricing power is going to be strong.

Throw in rising housing rents – which on their own account for 7.9% of the inflation basket – and we could see inflation push above 3.5% and possibly head close to 4% by May. 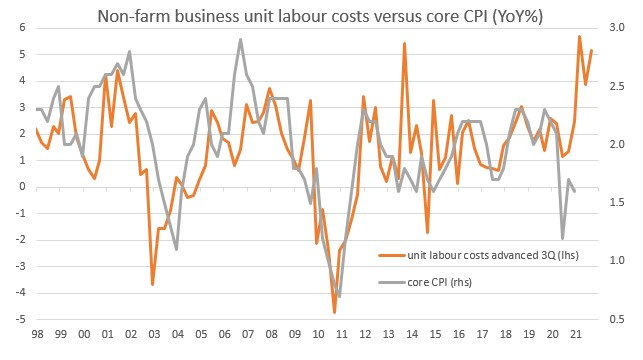 The debate over inflation and what it means has taken on new life following comments from Lawrence Summers, the former Treasury Secretary from when Bill Clinton was president and chairman of the National Economic Council under president Barack Obama.

He said last week that given the current economic backdrop, Joe Biden’s proposed $1.9tn fiscal stimulus plan risks triggering “inflationary pressures of a kind we have not seen in a generation, with consequences for the dollar and financial stability”.

The Biden administration retorted that their priority is to ensure the recovery actually happens. Current Treasury Secretary and former Fed Chair Janet Yellen argued that while inflation could rise, the “most important risk” was not doing enough to address the economic impact of the pandemic. Certainly today’s report gives her more ammunition to push back against Larry Summers’ position and the stimulus doubters.

Inflation likely to be stickier

That said, while there could yet be challenges to the recovery in the form of Covid mutations or vaccine setbacks, the balance of risks is seemingly becoming skewed towards higher inflation for longer than what we thought likely just before Christmas.

December’s $900bn fiscal support package followed by the proposed $1.9tn package, followed by a potential $3tn Build Back Better infrastructure and Green energy plan is a lot of money going into an economy at a time when the Federal Reserve continues to buy $120bn of financial assets each month.

The current fiscal proposal, worth around 4% of GDP, is heavily front loaded with a key plank being a $1400 check for people earning less than $75,000 per year. Given we are already forecasting very robust consumer demand this additional prop could contribute significantly to even higher spending (see chart below from www.tracktherecovery.org).

In turn this heightens the chances of inflation staying more elevated for longer. Remember, household cash and savings deposits have risen $2.4tn since 3Q 2019 and credit card balances are at 4 year lows so it isn’t just government that has cash ammunition to spend.

Wages will be key for the longer run

How sustained inflation will be is likely going to be determined by the response of the labor market. The US is largely a service sector economy meaning that the main inflation driver over the medium to longer term is the price of the workforce. If the economy sees rapid jobs growth and wages start to rise, this is when inflation can become a much bigger, ingrained issue.

Currently there are 9.8 million fewer people in work than 12 months ago and this would suggest we shouldn’t be too worried just yet, but it is something we will need to keep a very close eye on. The proposal to hike the national minimum wage to $15/hour could certainly influence matters. Is the Federal

Reserve too sanguine?
The Fed has had an awful track record on hitting its inflation target over the past decade. Since the Global Financial Crisis the Fed’s favoured measure of inflation, the core personal consumer expenditure deflator, has reached or broken above the 2% of target less than 10% of the time. It is easy to see why the Fed suggests it will “look through” what it feels could be a temporary spike.

However, we have sympathy with Larry Summers’ view that this time it could be different. There are growing questions over whether the Federal Reserve really needs to continue buying so many assets each month and whether it is realistic to assume that we are three years away from the first interest rate rise.

We suspect the robust growth environment and a higher and more sustained set of inflation readings will lead to a change of thinking with Quantitative Easing likely to be tapered before year-end and the first Fed rate hike coming in 2023. Given this backdrop we expect the 10Y Treasury yield to push up to 1.5% by mid-year with a 1.75% handle our base case for 2H21.

This publication has been prepared by ING solely for information purposes without regard to any particular user’s investment objectives, financial situation, or means. Read more