New US estimates for the first quarter point to a strong acceleration in growth over last year’s Q4 increase, based on a set of recent nowcasts. Survey data tracking economic expectations also point to a ramp-up in projected output for the Q1 GDP report that’s scheduled for release next month.

US growth in the first three months of 2021 is projected to increase 8.7% (real annual rate), based on the median nowcast for several estimates compiled by CapitalSpectator.com. That’s a near-doubling of the forecast vs. the previous review in mid-February. 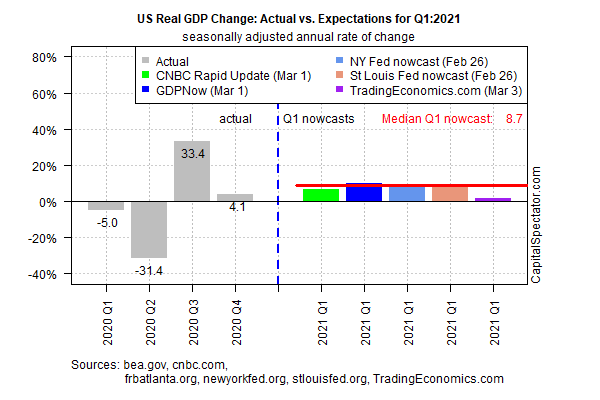 Stronger growth for the start of 2021 is also resonating in new survey data. The Index, a proxy for GDP, posted a “substantial upturn in private sector business activity” in February, the consultancy advises. “US business activity is growing at the fastest rate for six-and-a-half years, setting the economy up for a strong start to 2021,” adds Chris Williamson, chief business economist at IHS Markit. 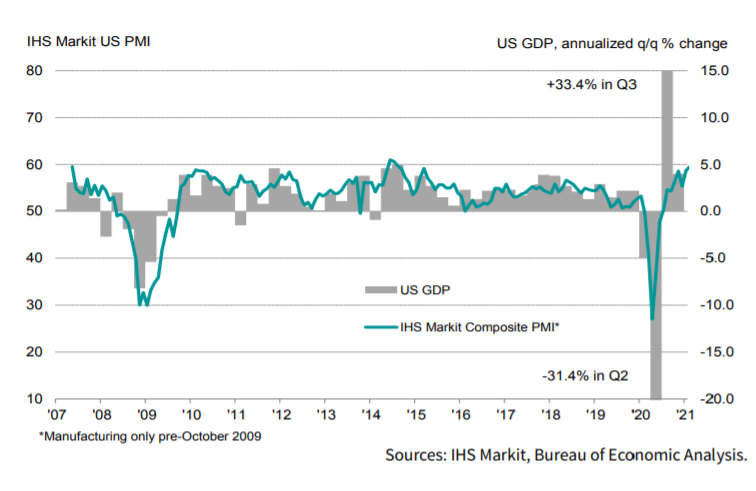 Ed Yardeni of Yardeni Research also expects that the recovery will pick up speed. “The V-shaped recovery in real GDP will remain V-shaped during the first half of this year and probably through the end of the year,” he predicts in research note this week. “However, it will no longer be a ‘recovery’ beyond Q1 because real GDP will have fully recovered during the current quarter. Thereafter, GDP will be in an ‘expansion’ in record-high territory.”

“We are not living the downside case we were so concerned about the first half of the year.”

“We have a prospect of getting back to a much better place in the second half of this year.”

Labor market data will be a key test for deciding if upgraded optimism is valid. Friday’s for February (Mar. 5) is expected to show stronger growth. Nonfarm payrolls are projected to rise 175,000, according to Econoday.com’s consensus point forecast. That’s sharply above January’s weak 49,000 gain, although February’s increase is still soft relative to what’s needed to fully repair last year’s massive losses that continue to haunt the economy.

Indeed, continue to rise at an unusually high level each week, nearly a year after the pandemic first struck. New filings for unemployment are still increasing at a rate that exceeds or matches the worst points in recessions past. If the rosy economic projections are correct, claims will start posting sharp declines. If not, the recent run of sunny economic forecasts will prove to be premature.