EU equities traded mixed yesterday, while Wall Street slid, driven by losses in technology stocks. However, market sentiment improved during the Asian session, as government bond yields pulled back. We stick to our guns that equities are likely to rebound and trend north again as investors digest the idea that any spike in inflation will prove to be temporary.

The traded lower against all but two of the other G10 currencies on Tuesday and during the Asian session Wednesday. It lost the most ground versus , and , while it was found virtually unchanged against and . 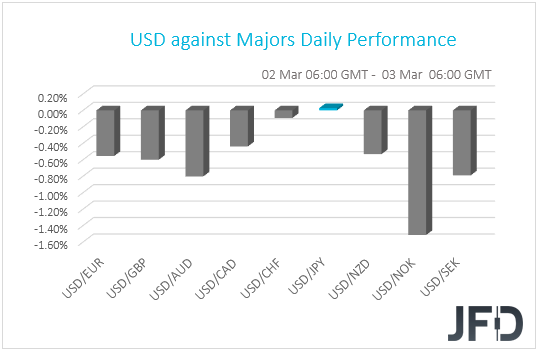 The relative weakness in the safe-havens yen and franc, combined with the strengthening of the risk-linked Aussie, suggests that markets turned to risk-on again at some point. Indeed, although EU indices were mixed, and the US ones slid, the Asian ones traded higher, with Japan’s and China’s gaining 0.51% and 1.95% respectively. 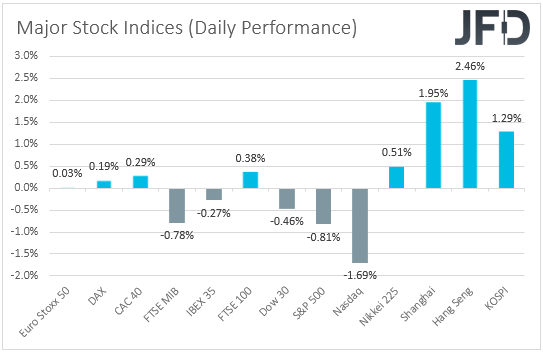 Wall Street finished its trading session lower, driven by losses in technology stocks, perhaps as investors moved out of stocks that outperformed due to the coronavirus pandemic into others viewed as likely to do well as the economy recovers. What’s more, they may have adopted a cautious stance ahead of the debate in Senate over President Biden’s USD 1.9trln stimulus package. In any case, market sentiment improved during the Asian session, as government bond yields pulled back.

Lately, the surge in government bond yields was the result of fears of higher inflation as the global economy recovers from the damages of the pandemic, which could lead major central banks to start normalizing their respective policies. This forced equities to retreat. However, with several officials noting that any spike in inflation this year is likely to prove to be temporary and that they are planning to keep their policies extra-loose, we don’t expect equities to continue falling for long. We will treat the latest setback as a corrective phase. We stick to our guns that equities are likely to rebound and trend north again as investors digest the idea that any spike in inflation will prove to be temporary. In the currency world, this could mean a weaker dollar, as well as weaker safe havens, like the yen and the franc. On the other hand, risk-linked currencies, the likes of Aussie and , are likely to strengthen.

After reversing from the 6460 hurdle, which is the lowest point of last week, the index rushed to the upside and is now trading slightly above a short-term downside resistance line taken from the high of Feb. 16. The price is also testing yesterday’s high, at 6662. In order to aim for higher areas, we would need to see a push above that barrier first, hence our somewhat positive approach for now.
A break above that 6662 barrier, would confirm a forthcoming higher high, possibly clearing the way to the 6702 zone. That zone marks the high of Feb. 25, which may stall the index for a bit. That said, if the buyers are still feeling comfortable, they might push the FTSE 100 further above that zone, aiming for the 6767 level, which is the high of Feb.17.

On the downside, a fall back below the aforementioned downside line and then a price-drop below the 6605 hurdle, marked by an intraday swing low of Mar. 2, could invite more sellers into the arena. The FTSE 100 could slide to the 6552 obstacle, marked by yesterday’s low, which might provide a bit of a hold up for the index. The price could retrace back up, however, if it stays below the aforementioned downside line, another drop may be possible. If this time the bears are able to overcome the 6552 zone, the next possible target might be at 6517, marked by an intraday swing high of Feb. 26 and an intraday swing low of Mar. 1.

reversed sharply to the upside, yesterday, as DXY made a move back down. The pair managed to climb back above the 21-day EMA on our 4-hour chart, however, it is still trading below its key resistance hurdle, at 1.2100, marked near the current highest point of March. In order to examine higher areas, we would need to see a push above the 1.2100 first. Hence our cautiously-bullish approach for now.
If, eventually, the rate accelerates and breaks that 1.2100 barrier, this may attract more bulls into the field. The pair might continue to drift north, moving above all of its EMAs, which could be seen as an additional positive sign. EUR/USD may travel to the 1.2141 hurdle, marked by an intraday swing high of Feb. 26, a break of which might clear the way to even higher areas. The next potential resistance zone could be between the 1.2174 and 1.2182 levels, marked by the highs of Feb. 24 and 26.

Alternatively, a move back below the 1.2027 and 1.2023 levels, marked by the lows of Mar. 1 and Feb. 17, may open the way for a larger slide. EUR/USD could then drift to the 1.1992 hurdle, marked by the current lowest point of March, which might halt the downmove for a bit. That said, if the bears are still feeling comfortable, they could easily push the rate further south, possibly targeting the 1.1972 obstacle, or the 1.1952 level, marked by the lowest point of February.

We have the final services and composite PMIs for February from the , the and the , as well as the US’s index for the month, which is anticipated to have held steady at 58.7. The report for February is also coming out and it is expected to show that the private sector has gained 168k jobs, less than the 174k jobs added in January. This is likely to raise speculation that the , due out on Friday, may come near their own forecast of 165k.

On the political front, in the UK, finance minister Rishi Sunak will present the nation’s budget and he is expected to pledge on more spending. However, this may be the last pandemic-related aid he offers. In any case, a generous package may allow the pound to rebound and trade higher.