The rebounded against most of its major peers, while US and Asian equities slid as bond yields rose again. However, with major central banks pledging to keep their respective policies extra-loose, we believe that market sentiment will improve again soon. Yesterday, we also had a BoE decision, with the Bank keeping its policy unchanged, while overnight, it was the turn of the BoJ. This Bank widened the band of its long-term yields, and made some tweaks with regards to its ETF purchases.

The US dollar rebounded against all but one of the other G10 currencies on Thursday and during the Asian morning Friday. It gained the most versus , , , and in that order, while it gained the least against . The greenback was found virtually unchanged against JPY. 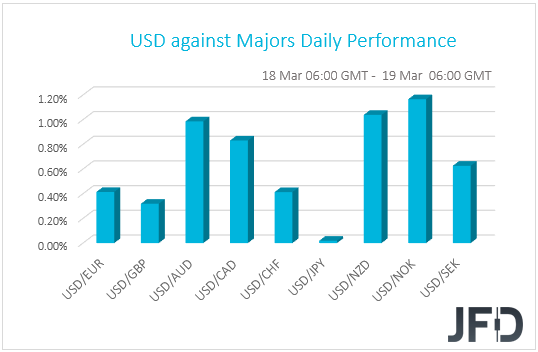 The strengthening of the dollar and the , combined with the weakening of the risk-linked and , as well as the weakening of the oil-related NOK and CAD, suggests that markets traded in a risk-off fashion yesterday and today in Asia. Indeed, although major EU indices closed in positive territory, the US and Asian ones were a sea of red, with falling the most (3.02%). 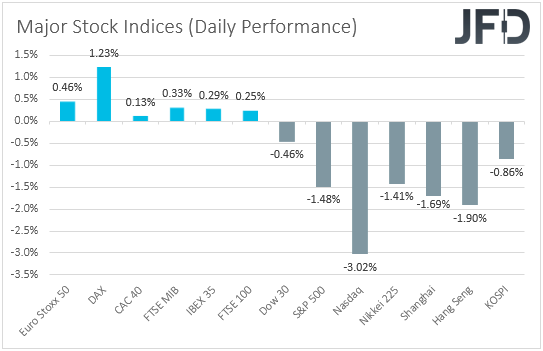 The switch back to risk off may have been the result of rising yields again. The benchmark US yield climbed to a more than one-year peak of 1.754% before easing to 1.706%. In any case, even if yields rise a bit more, we don’t expect the risk-off trading to last for long. After all, the Fed’s view is that this is a reflection of robust recovery and pledged to keep interest rates at current levels even through 2023.

Officials maintained the view that any spike in inflation in the months to come is likely to prove to be temporary. Thus, we stick to our guns that equities may rebound and continue trending north, while the US dollar and other safe havens, like the yen, are likely to come back under selling interest. Other risk-linked currencies, like the Aussie and the Kiwi, could rebound as well.

Apart from the reduced risk-appetite, the oil-linked NOK and CAD also felt the heat of tumbling oil prices as a new wave of COVID-19 infections, especially across Europe, spurred fresh lockdowns and dampened hopes for an imminent recovery in fuel demand. The technical picture in both and points to the completion of a failure swing top formation, which may result in some further declines. Thus, although we would expect other commodity-linked currencies to rebound soon, we prefer to stay sidelined against these two, as oil demand worries may not dissipate that soon.

Yesterday, we also had a BoE decision, with British policymakers keeping their monetary policy settings unchanged, and noting that the recent plans for easing of covid-related restrictions may be consistent with a slightly stronger outlook for consumption growth. However, they repeated that the outlook for the economy remains unusually uncertain and that if the inflation outlook weakens, they stand ready to take the necessary action. The pound has been trading slightly strong ahead of the decision, but fell around 25 pips against its US counterpart at the time of the release. However, with the vaccinations proceeding very well in the UK, we believe that the pound has the potential to rebound again, especially against the US dollar and the Japanese yen, which we expect to come back under selling interest due to an improved market sentiment.

Overnight, during the Asian session today, the central bank torch was passed to the BoJ, which decided to allow long-term yields to move up and down by 0.25% around zero, instead of by 0.2%. Japanese officials also decided to remove their explicit guidance over ETF purchases, saying that instead of buying a set pace, they would buy only when necessary, while maintaining the JPY 12trln annual ceiling. They also decided to confine purchases to only TOPIX-linked ETFs, instead of ETFs linked to the and . The Bank said that the changes were intended to make easing more sustainable. The yen strengthened somewhat at the time of the decision, while Nikkei 225 slid.

Yesterday, the index hit a new all-time high, but after that it reversed sharply to the downside, wiping out the weekly gains. Certainly, this makes the buyers worry, however the index continues to trade above a medium-term tentative upside support line drawn from the low of Oct. 30, which could still be seen as a positive. Also, looking back at the historic price action, we can see that the 50-day EMA sometimes acts as a good support zone. Even if the index retraces lower but manages to stay somewhere above that 50-day EMA, we might class this move lower as a temporary correction, before another possible leg of buying.

As mentioned above, a small decline may bring the price to the 50-day EMA. Around there the index could test the 3868 hurdle, marked near the highs of Jan. 21, 26 and by an inside swing high of Mar. 7. If that area holds, the S&P 500 may rebound and make its way back up again, possibly targeting the 3915 obstacle, or the all-time high, at 3988.

In order to consider much lower levels, a break of the aforementioned upside line would be needed. Also, a break below the 3798 hurdle, marked by the low of Mar. 8, could attract more sellers into the game. The S&P 500 might drift to the current lowest point of March, at 3722, a break of which may clear the path towards the lowest point of February, at 3664.

reversed sharply to the downside yesterday, after the equity world switched to a risk-off mode. The pair made its way closer to the medium-term tentative upside support line drawn from the low of Nov. 2. Even if the rate drifts a bit more to the downside, as long as it stays above that upside line, the trend will remain to the upside.

A small decline might bring the rate closer to the aforementioned upside line, which if once again provides support, may help attract the bulls back into the game. If so, AUD/USD could rise to the 0.7800 obstacle, or to the current high of this week, at 0.7845. If the buying doesn’t stop there, the next possible target might be at 0.7934, marked by the high of Feb. 23.

Alternatively, if the previously-discussed upside line breaks and the rate falls below the current lowest point of March, at 0.7621, that would confirm a forthcoming lower low, possibly opening the door for a further move south. If so, more sellers could join in and drive AUD/USD towards the lowest point of February, at 0.7564, a break of which may set the stage for a move to the low of Dec. 21, at 0.7461.

On the indicators front, we only have Canada’s retail sales for January. Both the and mom rates are expected to have risen, but to have stayed in the negative territory.

We also have two speakers on today’s agenda and those are ECB Executive Board member Fabio Panetta, and BoE Deputy Governor for Financial Stability Jon Cunliffe.