For another day, the outperformed most of its major peers, with the weakening of the risk-linked and safe-haven currencies suggesting that, once again, the main driver in the financial markets was the rising bond yields. It seems that the prospect of more government spending and faster economic growth in the US added to fears of a spike in inflation, and that’s why bond yields rose further.

Fears Of A Spike In Inflation Push Yields Higher

The US dollar traded once again higher against the majority of the other G10 currencies. It gained the most versus , , , and , while it lost some ground only against . The greenback was found virtually unchanged against and . 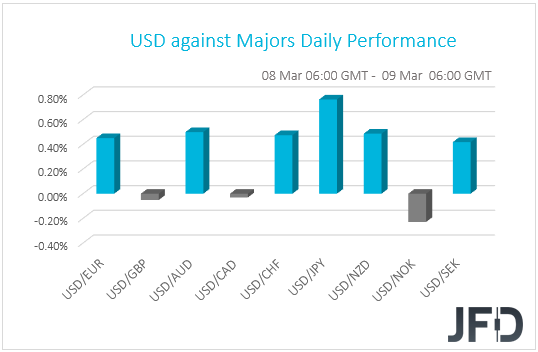 The strengthening of the greenback, combined with the weakening of the risk-linked currencies Aussie and Kiwi and the weakening of the safe-havens yen and franc, suggests that, once again, the main driver in the financial markets was the rise in government bond yields around the globe. Turning our gaze to the equity world, we see that, although major EU indices closed in the green, in the US, the and traded in negative waters. As for today, market sentiment was soft in Asia as well. Although Japan’s gained 0.99%, China’s , Hong Kong’s and South Korea’s slid 1.82%, 0.04% and 0.67% respectively. 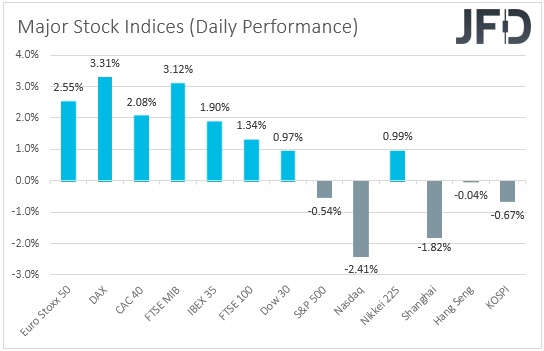 Following the passage of US President Biden’s USD 1.9trln relief package through the Senate, the prospect of more government spending and faster economic growth added to fears of a spike in inflation, and that’s why bond yields rose further. However, US Treasury Secretary Janet Yellen said that the package would fuel a “very strong” recovery, but she does not believe that the economy will run too hot due to that. In our view, her comments come inline with Fed Chair Powell’s remarks that any spike in inflation in the months to come is likely to prove temporary.

For now, any further rise in yields is likely to continue adding pressure to low-yielding currencies, like the safe-havens yen and franc, but it could also hurt equities and other risk-linked assets, like the Aussie and the Kiwi. The main beneficiary from that is the US dollar, which may continue to shine for a while more. Having said all that though, we stick to our guns that the decline in equities may be a corrective phase.

The Fed has clearly said that they expect any spike in inflation to be temporary and that inflation will rise and stay above 2% for some time – the goal for the beginning of normalization – in the years after 2023. As a result, we expect fears over high inflation to ease in the foreseeable future, which may allow equities and other risk-linked assets to rebound. As for the dollar, it may come under selling interest on more signs that the Fed is likely to stay accommodative for longer than previously assumed.

Although the S&P 500 index managed to climb back up recently, it still trades below its short-term tentative downside resistance line drawn from the high of Feb. 16. We might see more upside to come, but if the price struggles to overcome that downside line, we may continue looking south. We will take a somewhat-bearish stance for now.

A push higher could bring the price to the 3881 hurdle, marked by yesterday’s high, or to the previously-discussed downside line. If that downside line continues to stay a strong obstacle on the way north for the S&P 500, the bears might take advantage of the higher price and send it down again. If so, the index may drift to the 3819 obstacle, or to the 3798 level, marked by yesterday’s low.

On the other hand, if the previously mentioned downside line breaks and the price rises above the 3915 barrier, marked by the current highest point of March, that may attract more buyers into the game. The S&P 500 might travel to the high of Feb. 25, at 3937, a break of which may set the stage for a push to the highest point of February, at 3964.

continues to drift higher, while trading above a short-term tentative upside support line taken from the low of Feb. 26. This morning, after reaching the 0.9375 hurdle, the pair reversed a bit lower. If the pair goes more to the downside, we may class this move as a temporary correction, especially if the rate remains above that upside line. For now, we will take a somewhat positive approach.

A small drift lower might send the pair to the 0.9319 hurdle, marked by the high of Mar. 5, or to the aforementioned upside line. If that whole area provides good support, the rate may rebound and make its way back up again towards the 0.9375 barrier. A break of that barrier would confirm a forthcoming higher high, possibly clearing the way to the 0.9410 zone, marked by the high of July 20.

Alternatively, if the aforementioned upside support line breaks and USD/CHF falls below the 0.9257 area, marked by the low of Mar. 5, that could spook new buyers from entering for now. The pair could drift to the 0.9194 obstacle, a break of which might set the stage for a push to the 0.9136 level. That level marks the low of Mar. 2.

The calendar appears very light today, with the only data worth mentioning being Eurozone’s final for Q4 and the API (American Petroleum Institute) report on crude oil for last week. Eurozone’s final GDP print is forecast to confirm its second estimate of -0.6% qoq, while no forecast is available for the API report.

Tonight, during the Asian morning Wednesday, we have China’s and for February. The CPI rate is forecast to have slid to -0.4% yoy from -0.3%, while the PPI one is anticipated to have rallied to +1.5% yoy from +0.3%.