“Twice a day we are all forced to await the quotation of the Zurich bourse. Every fresh drop in its value [of Austrian kronen to Swiss franc) is followed by a wave of rising prices … The confidence of Austrian citizens in the currency administration of the State is shaken to its foundation. The State which is perpetually printing new banknotes deceives us with the face value … A housewife who has had no experience of the horrors of currency depreciation has no idea what a blessing stable money is, and how glorious it is to be able to buy with the note in one’s purse the article one had intended to buy at the price one had intended to pay.” – account of Frau Eisenmenger, recounted in When Money Dies (Adam Fergusson).

“Speculation on the stock exchange has spread to all ranks of the population and shares rise like air balloons to limitless heights … My banker congratulates me on every new rise, but he does not dispel the secret uneasiness which my growing wealth arouses in me … it already amounts to millions.” – Ibid.

These two passages come from the contemporaneous observations of an Austrian living through the early stages of the hyperinflation that followed WWI in that country. I don’t for a minute mean to suggest that the global economies are on the verge of hyperinflation, but I present these as an apt illustration of a concept called money illusion.

In the first passage, the writer makes plain that the kronen is buying less and less, in terms of real goods, every day. Similarly, it buys less and less in terms of equity shares. The former, we tend to regard as a negative, and the latter as a positive, even though they are both related in this case to the same phenomenon: the unit of measurement is losing its value, so that it buys less real stuff as time passes. Isn’t that interesting? For someone who is continually investing in the equity market – I’m looking at you, millennials – higher prices should strike us as a bad thing just as higher car prices strike us as a bad thing.

I don’t mention that, though, to suggest that equities are a great place to hide out from . In fact, they’re a pretty lousy place: as inflation rises the multiple paid on earnings declines so that even if nominal earnings are rising with inflation equity market prices can’t keep up.

That’s not as bad as holding paper money and watching it go to zero, but it ends up being about the same when the inflation gets serious enough that the market itself collapses—as it did in each example of monetary hyperinflation (Germany, Austria, Zimbabwe, etc) that we have seen to date. But again, it isn’t my purpose today to warn about the dangers of treating equities like real assets when multiples are at nosebleed highs.

The interesting part is the money illusion. The writer in the passages above is uneasy, because while she is making millions she understands that those millions are losing value almost as fast (and ultimately, faster) than she can make them. But for a while the higher and higher prints of the market, the rising value of one’s home, and the accelerating increase in wages makes people feel wealthier. And wealthier people are happier and tend to spend more of the marginal wealth, when that wealth is real. But in this case the wealth is an illusion, because that additional wealth buys (at best) the same amount it did previously.

In classical economics, we would call spending more in this circumstance—despite having a similar claim to wealth in real terms—irrational. Although we use s to translate our labor into the things we want to buy, we all understand that we are really trading our labor for those things—it’s just that we need a medium of exchange because no one wants to directly exchange groceries for inflation-focused asset management services. More’s the pity.

So homo economicus would regard his increasing millions in the market and not feel any wealthier as he knows the units of account are growing weaker. The money dropped into his bank account through a universal direct stimulus also wouldn’t be treated as actual wealth, since if we handed everyone a trillion dollars then obviously we all wouldn’t be living like trillionaires because the people who sell goods and services would adjust their prices (if they did not, then those vendors are voluntarily decreasing their own claim to the real wealth, by accepting smaller real payments in return for the same amount of goods). Wealth is just a claim on the national product. If everybody’s nominal wealth rises, but the nation is not able to produce more units of real output, then in aggregate we clearly are not wealthier because the pie is the same size. (Now, if you hand everyone a trillion dollars except for one guy, then that guy is poorer and everyone else slightly richer. Ergo, direct cash payments to the poor are clearly a way to distribute actual wealth, especially if those who don’t receive those payments also face higher taxes. So fiscal policy here definitely shuffles the deck of the wealthy. It just doesn’t make us wealthier in aggregate.)

The question of how people behave when they see additional income that comes from a greater money supply, rather than from additional productivity/output, is crucially important in monetarism. In the quantity equation of exchange, MV≡PQ, an increase in the quantity of money and in the velocity of money (MV), which is the total nominal amount of expenditures, necessarily equals the real output times the price level of that output (PQ). The amount that is spent equals the amount that is bought. But how the right side divides between P and Q is very, very important. If there is no money illusion, then an increase in the quantity of money will primarily increase prices while output will remain stable. Shopkeepers are unwilling to part with their wares for a smaller piece of the pie in real terms. On the other hand, if money illusion is rife then producers respond to consumers flush with cash by providing as many goods and services as they can; they view the masses as having more actual wealth to spend and so output increases and prices don’t rise as much.

Unfortunately, it seems that money illusion operates primarily when the quantities involved are small, or narrowly distributed. When incremental money creation is widely distributed and significant in size, then (as the second quote at the start of this article suggests) consumers, suppliers, and investors eventually figure it out. When that happens, a change in M is almost fully reflected in a change in P, as over time it usually is anyway. So the secret of recovering from a negative economic shock by expansionary monetary policy is to boil the frog slowly.

No one involved in current policy circles is interested in boiling the frog slowly. And that means it’s not going to end well.

In this context, the current bubbly stock market looks decidedly better. The chart below shows the divided by M2 (and multiplied by 100 because sometimes I don’t like looking at decimals on my y-axis). Now, the S&P 500 level isn’t the purest look at the total value of the equity market, but you get the general idea here—stocks have outrun the growth rate in the money supply, even over the last year, but the new records we are hitting are mostly on money vapor. 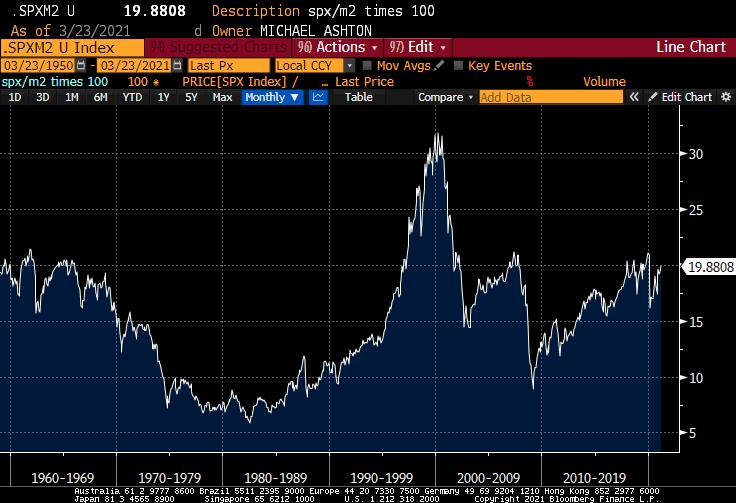