A special thank you to Alexander Stahel for providing us historical data on real interest rates.

What is a Dollar?

The value of a is a figment of your imagination. A “greenback” is a worthless piece of paper backed by an intangible promise—the “full faith and credit” of the U.S. government. Its value rests on a necessary belief that one can transact with it today and tomorrow. Therein lies the value of any fiat currency.

Similarly, has little tangible value other than what we ascribe to it. Gold is not currently an authorized currency in any developed nation. But, it is held in proportionally small amounts by many governments as an informal reserve. Besides opinions of worth, the difference between the dollar and gold is gold has provided a means of storing wealth and transacting for millennia. Gold is and has always been the antithesis of fiat currency. There are important differences, such as elasticity, storage, and transact-ability that we will not review in this article.

Decades of irresponsible fiscal spending and monetary tomfoolery slowly but surely reduce the dollar’s value. The loss of its value is not perceptible to most as a dollar is still worth a dollar. For those on the lookout, however, the price of gold is sending a strong message.

The message is not in the price of gold per se but its strong correlation to destructive fiscal and monetary policies.

Trust in the Dollar

The U.S. dollar is the world’s most trusted currency. Even America’s most ardent enemies transact in dollars and hold them as reserves.

For the last 30 years, the U.S. government has run continual deficits requiring ever greater assistance from the Fed to fund it. The Fed works their magic by adjusting the nation’s money supply to manage interest rates and keep interest expenses manageable.

For many years, as shown below, the monetary base was approximately 5% of the nation’s annual economic output. Starting in 2008, however, the Fed took much bolder steps to push interest rates lower. Their actions ensured the government could sustain recurring outsized deficits. Equally important, corporate and private borrowers can service mounting debt levels.

With short-term rates lowered to zero in 2008 and traditional monetary tools not affecting longer-term rates, the Fed introduced QE. QE requires large amounts of Fed purchases of notes and bonds to put downward pressure on the entire yield curve.

Successive rounds of QE occurred well past the end of the financial crisis and are happening again on a grander scale today. The Fed’s goal is to allow the government and other debt holders to fund at low-interest rates. Essentially they need to flood the system with money to make money cheap. 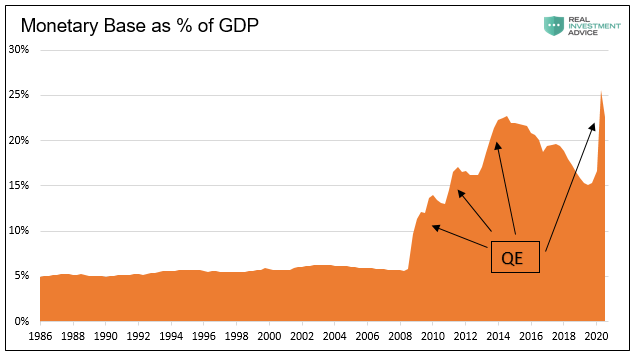 Monetary Base As % Of GDP

When the money supply is manipulated, prices stray from what supply and demand curves say the price should be.

A current example is U.S. Treasury yields or the price of money. Rational lenders/investors should always demand a positive yield accounting for inflation and risk. If not, they lose purchasing power and are better off not lending. Accordingly, the yield on Treasury debt should always equal future inflation expectations plus a risk premium.

The current yield on the Treasury note is 0.45%. 5-year inflation expectations are currently 2.18%. Even if we assume zero risks, the yield is at least 2.17% below what any rational investor should demand. The -2.17% difference between the nominal rate and inflation rate is called the real rate.

The level of real interest rates is a sturdy gauge of the weight of Federal Reserve policy. If the Fed is treading lightly and not distorting markets, real rates should be positive. The more the Fed manipulates markets from their natural rates, the more negative real rates become.

In this vein, we can analyze the price of gold and real interest rates to help decipher what gold prices may be signaling.

When real rates are positive, the Fed is not excessively interfering in the pricing of interest rates. However, as they approach negatively and ultimately fall below zero, the impact, or degree of manipulation, is more noticeable.

Linking real rates to the degree of central bank action form the basis on which we can look at the dollar’s value through the prism of gold.

The first graph below shows gold has trended similarly to the monetary base.

The next set of scatter plots are more compelling. They tell the story of how the price of gold has become increasingly correlated to real yields as they decline. Said differently, gold is growing more positively correlated to the size of the Fed’s footprint.

The three scatter plots break down the relationship into three-time horizons as shown below.

We repeat the last line of the introduction.

The message is not in the price of gold per se but its strong correlation to destructive fiscal and monetary policies.

As the chart below shows, it sadly appears that the Fed’s destructive role is only likely to grow in importance.