Allow me to translate the risible claims of Jay Powell and Janet Yellen that their stimulus policies haven’t boosted wealth inequality to the moon: “Let them eat cake.”

The euphoria of ever greater monetary and fiscal stimulus overlooks the diminishing returns and higher risks generated by near-exponential increases in stimulus. I prepared a chart that graphically displays the extraordinary increases in stimulus and the declining results in the primary goals of economic policy: broad-based opportunity to get ahead and reducing systemically destabilizing wealth inequality.

Looking back on this era, the fatal irony that all this stimulus has rocket-boosted wealth and income inequality while gutting the bottom 90% will be glaringly obvious. It’s actually glaringly obvious right now to those not blinded by euphoria. Consider this excerpt from the current issue of Foreign Affairs magazine, an article entitled Monopoly Versus Democracy (paywalled):

Like their forebears in the early twentieth century, today’s Americans have experienced decades of growing inequality and increasing concentrations of wealth and power. The last decade alone witnessed nearly 500,000 corporate mergers worldwide. Ten percent of Americans now control 97 percent of all capital income in the country. Nearly half of the new income generated since the global financial crisis of 2008 has gone to the wealthiest one percent of U.S. citizens. The richest three Americans collectively have more wealth than the poorest 160 million Americans. (Editor’s note: emphasis added.)

While Robin Hood stock traders may reckon their hot hand will boost them into the ranks of millionaires, it would take trillions of dollars of gains to even move the needle of our immense inequalities of capital and income: the top 10% skim 97% of capital income and own about 90% of all capital.

The ugly truth is all the monetary and fiscal stimulus of the past decade has only served to boost wealth and income inequality and reduce opportunity to gain a foothold in the New Gilded Age. In terms of offering those in the bottom 50% a stake in all this ballooning wealth, monetary and fiscal stimulus has failed completely: The richest three Americans collectively have more wealth than the poorest 160 million Americans.

The euphoric faithful also overlook the systemic risks created by exponential increases in stimulus that overwhelmingly benefit only the top 10%, top 1% and most especially the top .01%. The exponentially asymmetric benefits of ever greater stimulus generate social disorder that eventually breaks down the entire social order, while the exponential increases in debt, leverage and speculation increase the risks of a systemic financial collapse.

Allow me to translate the risible claims of Jay Powell and Janet Yellen that their stimulus policies haven’t boosted wealth inequality to the moon: Let them eat cake. And we all know how that worked out. 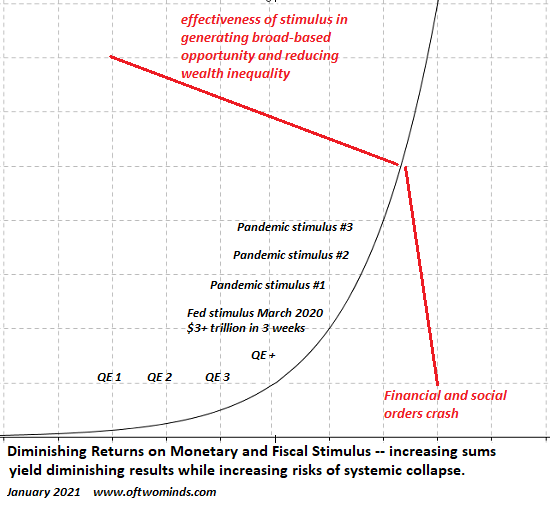