Due to the central-banking world’s unshakeable belief that money must continually lose purchasing power and the current authority of the central bank to do whatever it takes to achieve its far-reaching goals, the greater the perceived threat of deflation the more monetary inflation there will be. That’s why the endgame for the current monetary system involves rapid “price inflation.” This has been obvious for a long time, but some well-known analysts are just starting to cotton-on.

There were examples of the aforementioned phenomenon (the greater the fear of deflation, the higher the rate of monetary inflation) during 2001-2002 and again during 2008-2009, but 2020 provided the best example yet. As evidence we point to the following chart and the fact that the quantity of s created during the 12-month period ending January-2021 (4.8 trillion) is greater than the entire US money supply at the beginning of 2007. 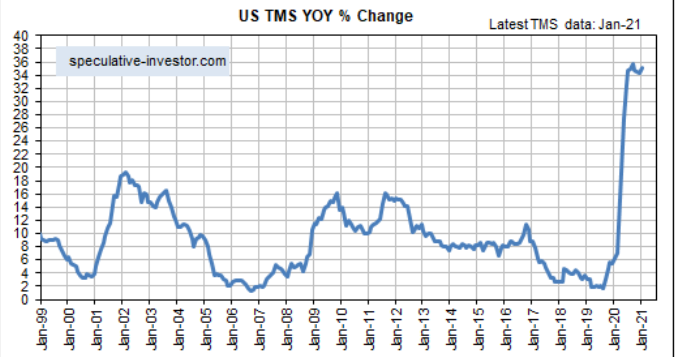 As an aside, it would be a good thing if deflation were the high-probability outcome that many analysts/commentators still claim it is, because deflation is relatively easy to prepare for. To prepare for deflation all you have to do is be ‘cashed up’, whereas in a high-inflation environment you are forced to speculate just to avoid a large loss of purchasing power.

At the moment the world’s most influential central bankers and economists don’t see a problem with rapid monetary inflation, because according to their favourite indicators previous large increases in the supply of money over the past two decades had only minor effects on the purchasing power of money. Also and as noted at the start of this discussion, the central-banking world is laboring under the belief that the economy would benefit from more “price inflation.”

However, in response to the most recent monetary inflation surge there will be a lot more traditional “price inflation” than a) there was in response to the previous money-supply growth spurts and b) the average central banker would consider to be beneficial. This isn’t only because of the much larger amount of money creation this time around, but also because of the way the new money is being distributed.

Whereas most of the new money created in reaction to earlier deflation scares was injected into the financial markets and stayed there, via the “stimulus” programs implemented last year and that are on the cards for this year the US government is, in effect, sucking a lot of money out of the bond market and sending it to the general public. Also, there will be a huge infrastructure spending bill that will do something similar (siphon money from the bond market to the public).

The Fed technically is still injecting new money into the financial markets by purchasing bonds from Primary Dealers, which means that it is doing what it did in response to earlier deflation scares. However, for all intents and purposes it is now monetizing a rapidly-expanding government budget deficit.

According to the book Monetary Regimes and Inflation, all of the great inflations of the 20th Century were preceded by central bank financing of large government deficits. Furthermore, in every case when the government deficit exceeded 40% of expenditure and the central bank was monetizing the bulk of the deficit, which has been the case in the US over the past 12 months, a period of high inflation was the result. In some cases hyperinflation was the result.