Most global equities traded in a narrow range yesterday and today in Asia, with investors taking a cautious approach ahead of the US for November, due out later today. With regards to the energy market, both and spiked higher after OPEC and its allies agreed to increase output by 500k barrels per day.

The continued trading lower against all but one of the other G10 currencies on Thursday and during the Asian session Friday. It gained marginally only versus NZD, while it lost the most ground against CAD, JPY, and GBP in that order. 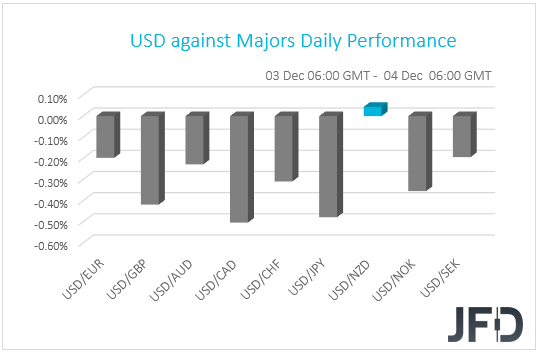 The weakening of the US dollar and the strengthening of the commodity-linked suggest a risk-on trading environment. Nonetheless, the strengthening of the and the weakening of the point otherwise. Thus, in order to get a clearer picture with regards to the broader market sentiment, we prefer to turn our gaze to the equity world. That said, the picture was mixed there as well, with major EU and US indices trading within a ±0.50% range. Asian stocks were also mixed and within a narrow range, with the exception being South Korea’s , which gained 1.31%. 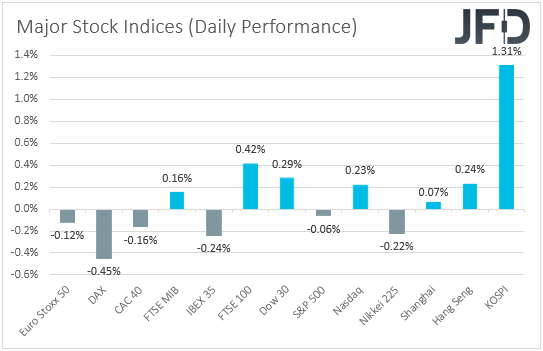 Investors’ morale was negatively affected by news that Pfizer (NYSE:) had slashed the target for the rollout of its COVID-19 vaccine, due to supply chain obstacles. However, relatively optimistic headlines over a new fiscal aid in the US prevented equities from tumbling well into negative waters. The USD 908bn bipartisan plan gained momentum in the Congress yesterday, with conservative lawmakers expressing their support.

Last week, passing a bill before year-end looked nearly impossible, but now, news and headlines point otherwise. Combined with the likelihood of more action by the Fed at its upcoming gathering, this could prove positive for equities and other risk-linked assets in the foreseeable future. It seems though that now, market participants took a more cautious approach, not only due to the Pfizer news, but perhaps also due to the release of the US employment report later today.

In our view, although the Congress is getting closer to passing a Covid-aid bill, the Fed is unlikely to alter possible plans for more action, especially if this jobs report falls short of the consensus.

Although the index continues to make higher lows, it is still struggling with overcoming its key resistance area between the 30107 and 30215 levels, marked near the high of Nov. 9 and the all-time high on our cash index, respectively. We could see the index correcting a bit lower, but if it is able to remain above a short-term upside support line taken from the low of Nov. 12, we will stay positive, at least for now.

As mentioned above, DJIA may correct a bit lower, however, if it stays above the aforementioned upside line, the bulls could step in again and drive the price north, possibly aiming for the previously-discussed resistance area between the 30107 and 30215 levels. If this time that resistance area surrenders and breaks, this will place DJIA into uncharted territory.

On the other hand, if the price breaks the previously discussed upside line and then slides below the 29460 hurdle, marked by the low of Nov. 30, that may attract more sellers into the game, increasing the chances for the index to drift further down. That’s when we will aim for the low of Nov. 22, a break of which could set the stage for a move to the 28888 level, marked near the lows of Nov. 10 and 12.

continues to drift higher, while balancing above a short-term tentative upside support line drawn from the low of Nov. 23. After a good run to the upside this week, the pair found some resistance near the 1.2175 barrier, from which it corrected slightly lower. There is a possibility to see a bit more correction to the downside, however, if EUR/USD remains somewhere above the 1.2100 zone, the bulls might step in again and take advantage of the lower rate. We will take a somewhat positive approach, at least for now.

As mentioned above, a small correction lower may bring the pair back to the 1.2100 area, which is yesterday’s low. If that area holds, the buyers might see it as a good opportunity to step in and drive EUR/USD higher. If so, the pair could end up testing the 1.2175 hurdle again, marked by yesterday’s high, which if broken may clear up the way to the 1.2215 level. That level is the low of Apr. 6 2018.

Alternatively, if the pair ends up breaking the aforementioned upside line and then sliding below the 1.2040 zone, which is the low of Dec. 2, that could spook the bulls from the field in favour of the bears. EUR/USD could then travel to the 1.2003 territory, a break of which might set the stage for a push to the 1.1922 level, marked by the low of Nov. 30.

Now, passing the ball to the energy market, prices traded higher yesterday, something that may have also helped the Canadian dollar to take the first place among the G10 gainers. Strangely, both Brent and WTI spiked higher overnight, after OPEC and its allies agreed to slightly increase production, by 500k bpd from January, even as they failed to reach common ground on a longer-term policy. This means that the group will now be cutting production by 7.2mn bpd, instead of the previous 7.7mn cuts.

Yesterday, we noted that, given expectations of a three-month extension of the existing cuts, any increase could prove negative for oil prices. It seems that we were wrong. Following the rally in oil prices on the positive coronavirus vaccine headlines, some investors may have changed their minds, hoping that some producers will now support an output increase.

Maybe the 500k bpd increase was not what many may have expected and that’s why oil prices gained. That’s the only explanation we could think of. In any case, the OPEC+ group will now be meeting once a month to review their plans, something that may result in a more volatile energy market going forward. For now, we expect oil prices to continue marching north, aided by the broader risk-on environment.

Later in the day, apart from the US employment report for November, we also get Canada’s for the month. The unemployment rate is forecast to have held steady at 8.9%, while the net change in employment is forecast to show that the economy has gained 27.5k jobs, less than October’s 83.6k. Although a somewhat softer than previously report, it is unlikely to raise speculation for BoC officials expanding their stimulative efforts again, especially after scaling back their QE purchases at their prior gathering.

Both the and n trade balances for October are on the agenda as well.

We also have three speakers on the schedule. Those are BoE MPC member Silvana , Chicago Fed President Charles , and Fed Board Governor Michelle .