In a “market mania,” retail investors are generally “long confidence” and “short experience” as the bubble inflates. While we often believe each “time” is different, it rarely is. It is only the outcomes that are inevitably the same.

I recently penned an article about Charles Mackay’s bookAs noted, that book was an early study in crowd psychology. To wit:

“Essential is the understanding of the role psychology plays in the formation and expansion of financial manias. From the 1711 ‘South Sea Bubble’ to the 2000 ‘Dot.com crash,’ all bubbles formed from a similar ‘panic’ by investors to chase ongoing speculation.”

A recent UBS survey revealed some fascinating insights about retail traders and the current speculation level in the market.

“Bubbles are characterized by extreme predictions, tend to dominate conversations and induce people to leave their jobs. The warnings of bubble skeptics get invariably met with scorn and derision.”

The number of individuals searching “google” for how to “trade stocks has spiked since the pandemic lows. 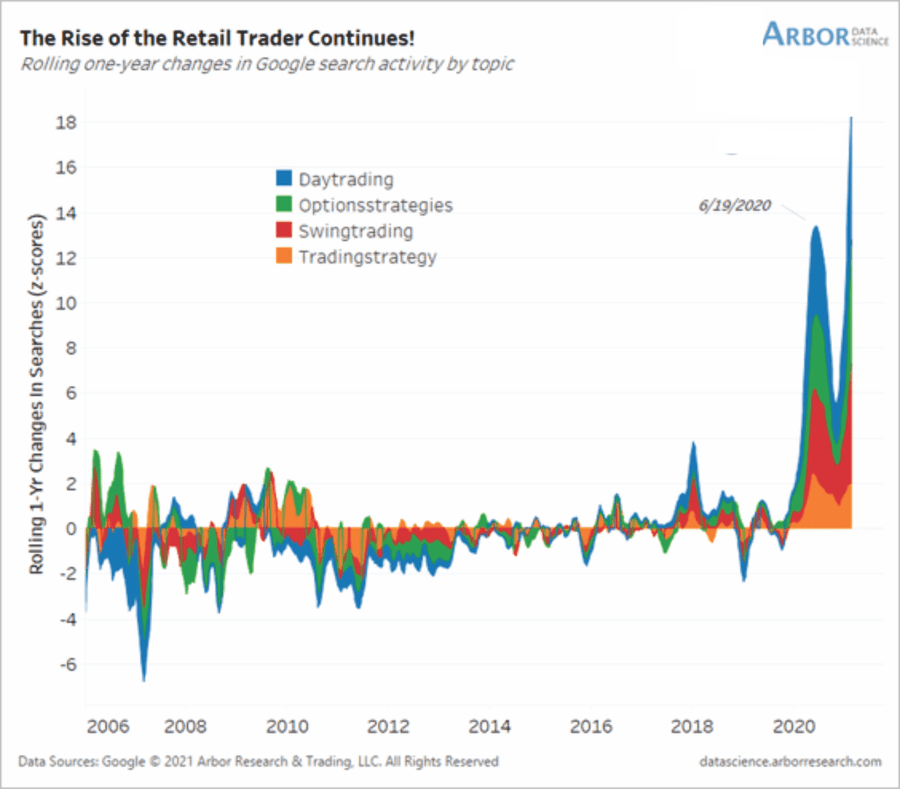 For anyone who has lived through two “real” bear markets, the imagery of people trying to learn how to “daytrade” their way to riches is familiar. From E*Trade commercials to “day trading companies,” people were leaving their jobs to trade stocks. Kind of like this couple: 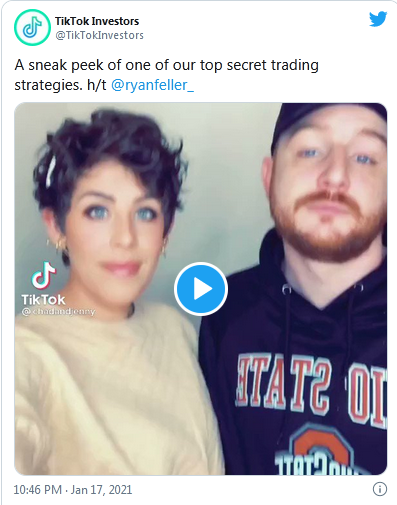 Such is just one example of many internet commentaries driving investors to “trade” stocks. Not surprisingly, we have seen a surge in securities’ daily trading volumes since the beginning of the pandemic. 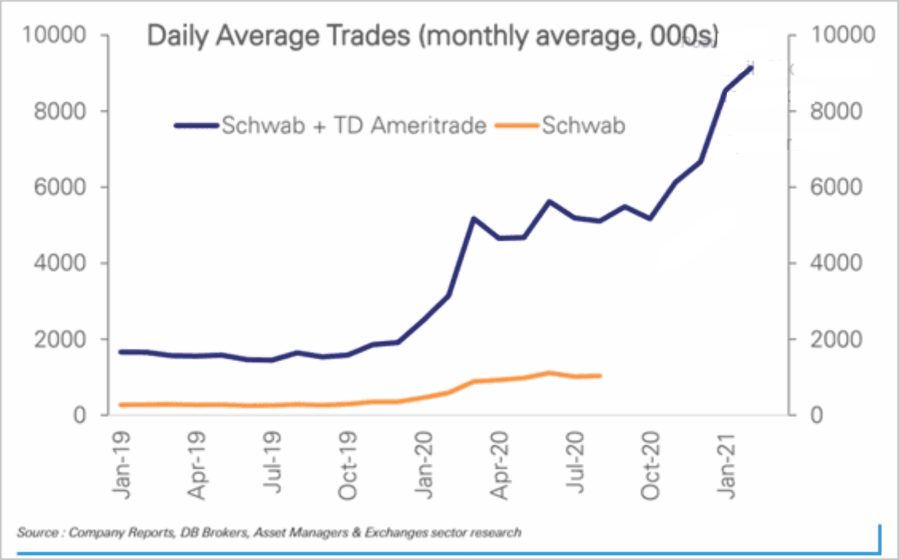 Importantly, these investors are not just buying equities but are using some of the risky vehicles to “leverage” the returns. As shown, option trading volumes have swelled. 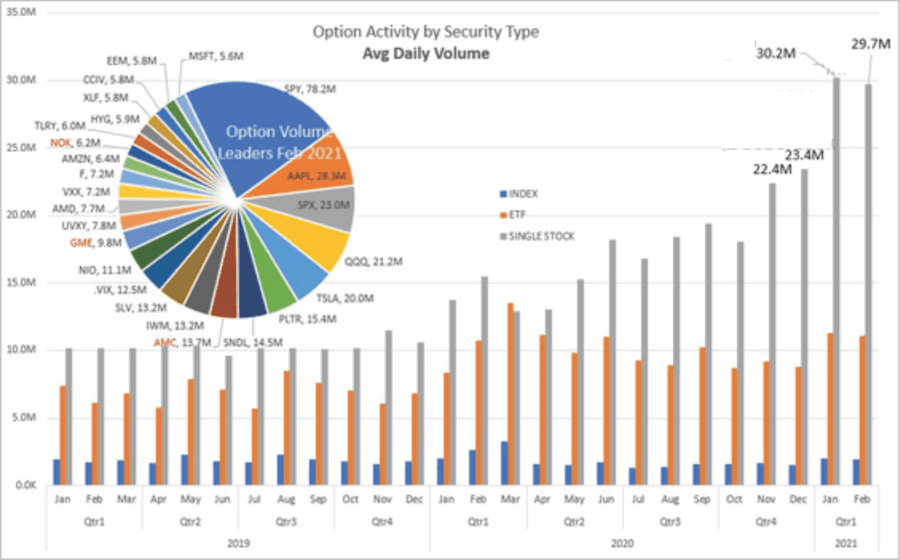 None of this is new, different, or unique.

The same thing happened in late 1999. That commercial aired just 2-months shy of the beginning of the “Dot.com” bust. As we see today, investors believed “investing was as easy as 1-2-3.”

Why this trip down memory lane? (Other than the fact the commercials are hilarious to watch.) Because this is typical of the exuberance seen at the peaks of bull market cycles.

Along with David Dodd, Benjamin Graham attempted a precise definition of investing and speculation in their seminal work Security Analysis (1934).

“An investment operation is one which, upon thorough analysis, promises safety of principal and a satisfactory return. Operations not meeting these requirements are speculative.”

There is also a significant passage in Graham’s The Intelligent Investor:

“The distinction between investment and speculation in common stocks has always been a useful one and its disappearance is a cause for concern. We have often said that Wall Street as an institution would be well advised to reinstate this distinction and to emphasize it in all its dealings with the public. Otherwise the stock exchanges may some day be blamed for heavy speculative losses, which those who suffered them had not been properly warned against.”

It should not be surprising we see such rampant “speculative” behavior in the markets. After a decade of monetary injections, investors believe there is an against losses. This insurance policy is most commonly known as the “Fed Put.”

It should not be surprising, since the “Fed Put” began following the “Financial Crisis,” it is primarily young investors lulled into that complacency. Armed with only a couple of years of investing experience and a fresh “stimulus” check, the “casino” is open. 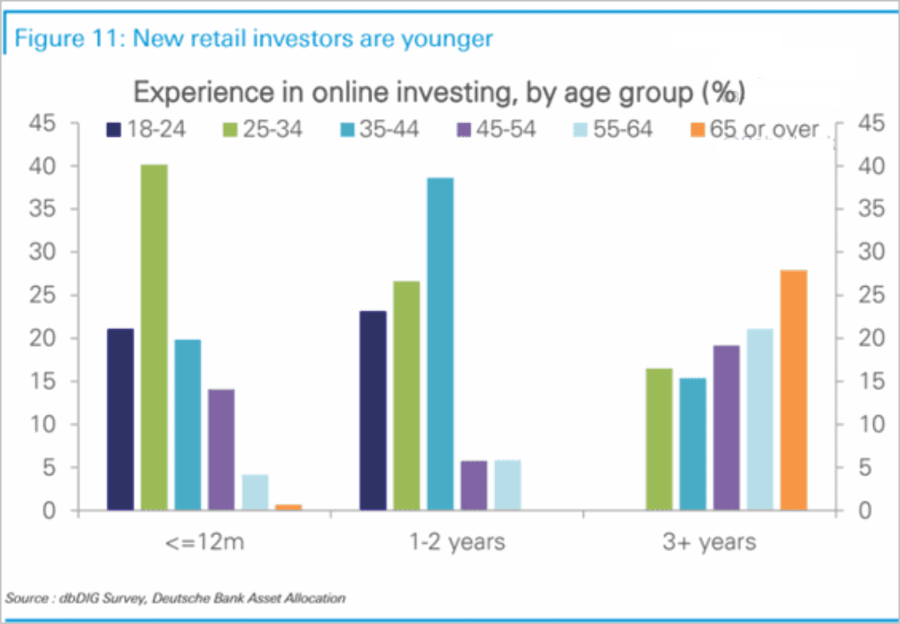 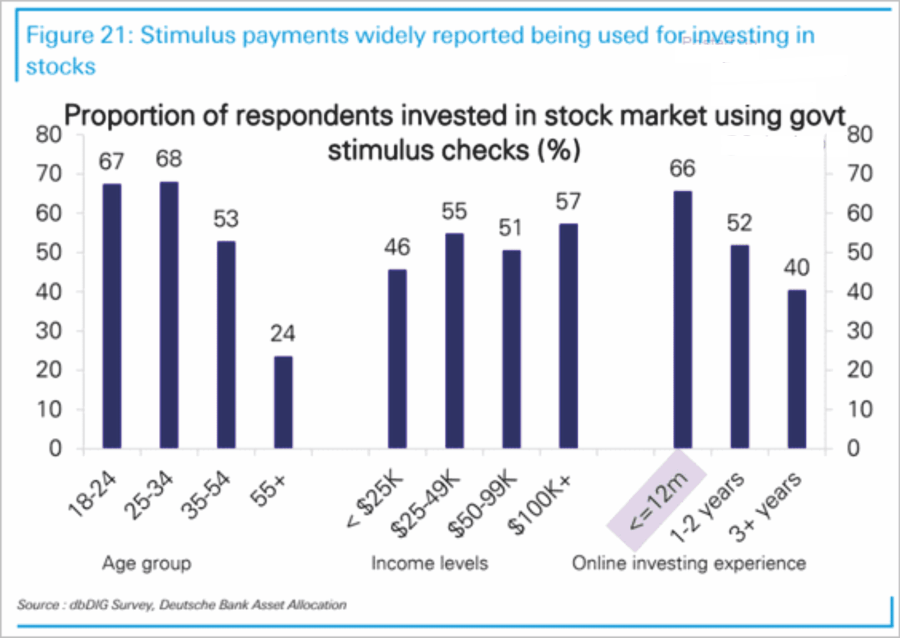 One of the signs that you have entered into a mania phase is when people have trouble absorbing non-conforming information. “Confirmation bias” is a psychological behavior where individuals disregard any information which conflicts with their current beliefs. While that bias has always been problematic for investors, in recent years, it has worse as individuals lock themselves inside “social media echo chambers.”

There are currently many signs of exuberance in the market. Most notably, the surge in speculative “call option” buying. While there are many complexities and risks, such is not a concern to young investors with little or no experience in trading options. Nor is it an issue to leverage up accounts using “margin loans.” 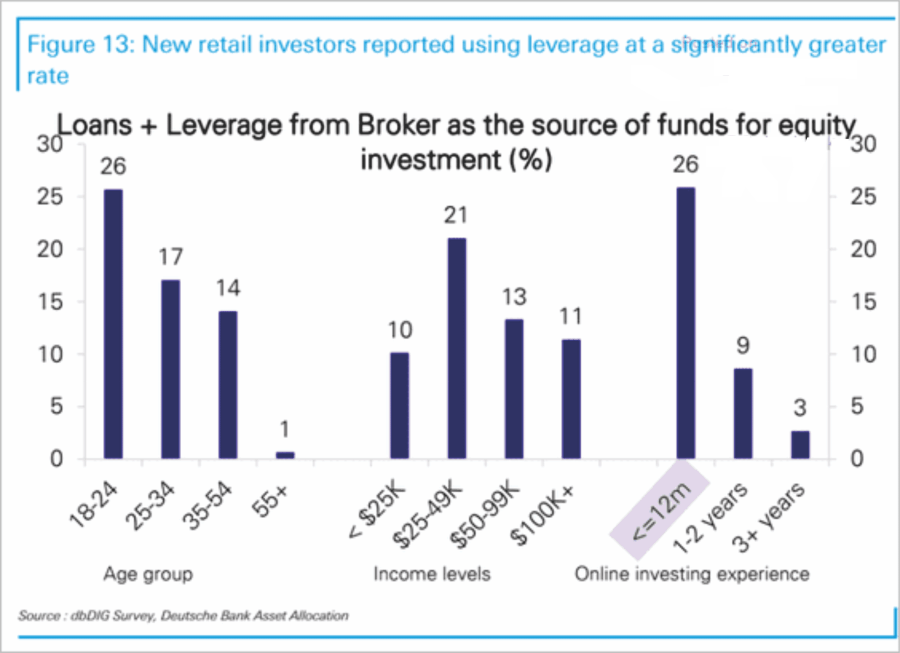 I suspect that most of the individuals surveyed, who are trading on margin, do not understand what happens when prices decline.

“Margin debt is not a technical indicator for trading markets. What margin debt represents is the amount of speculation that is occurring in the market. In other words, margin debt is the ‘gasoline,’ which drives markets higher as the leverage provides for the additional purchasing power of assets. However, ‘leverage’ also works in reverse as it supplies the accelerant for more significant declines as lenders ‘force’ the sale of assets to cover credit lines without regard to the borrower’s position.”

The last sentence is the most important. The issue with margin debt is the unwinding of leverage is NOT at the investor’s discretion. It is at the discretion of the broker-dealers that extended the leverage. (In other words, if you don’t sell to cover, the broker-dealer will do it for you.)

Just to put this into perspective, the rate of increase in margin debt is at historical extremes. Such has previously not worked out well for investors. 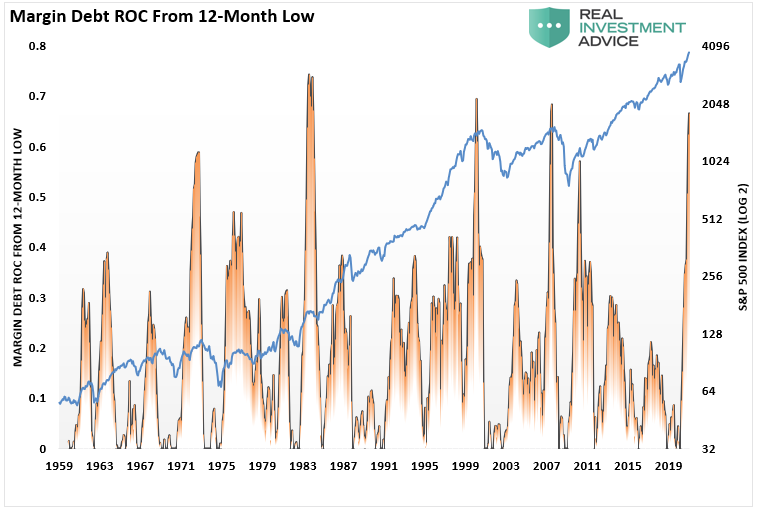 As shown, one of the most troubling aspects of where individuals are getting their investing guidance. The youngest and least experienced investors use social media as the “most important” source of information. Considering most social media users are the younger generation, this is the very definition of the “blind leading the blind.” 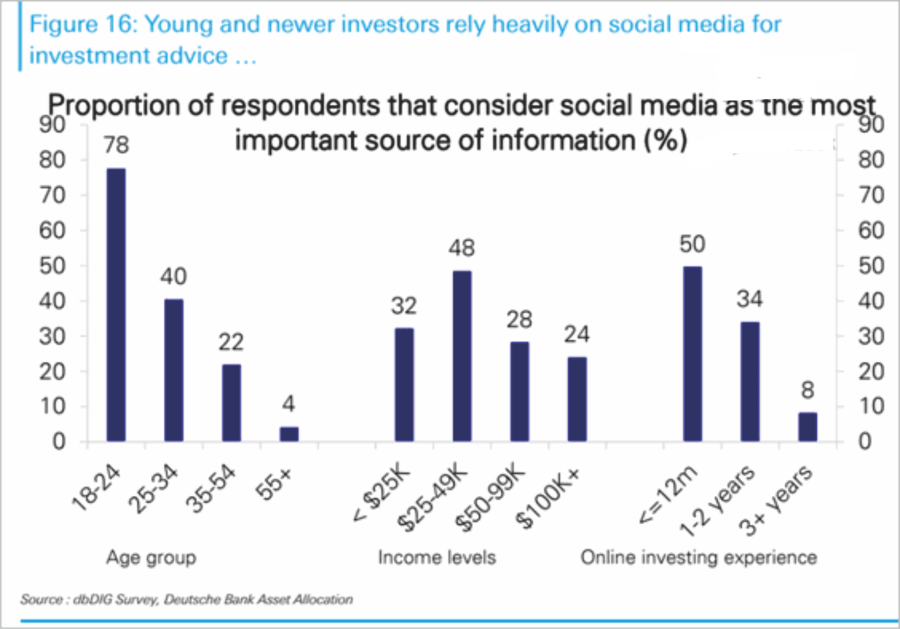 Retail Use Social Media For Information

Jason Zweig summed up the problem with this very well:

“As surely as the sun rises in the east, promoters will be touting these returns. A small-stock fund manager who’s up 40% over the past year can hype that gain in ads and on social media; 40% is a big, beautiful number! Only by reading the fine print would you be reminded that a 40% return underperformed the average by more than 10 percentage points.

You knew I would tell you this but I’m saying it anyway. These returns won’t last indefinitely. Enjoy them while they last, but you’d be crazy to count on such giant gains becoming common.

At times like these, grounding yourself in realistic expectations is more important than ever. Working in the garden also reminds me that market cycles, like nature’s seasons, can be extended — but not rescinded.”

The biggest problem for most young investors is the lack of research on the stocks they buy. They are only buying them “because they were going up.”

However, as Jason notes, when the “season does change,” the “fundamentals” will matter, and they tend to matter a lot. Such is something that most won’t learn from “social media” influencers.

A Man With Experience

There is an old WallStreet axiom which states:

Such is the truth about markets and investing.

Experience tends to be a brutal teacher, but it is only through experience that we learn how to build wealth successfully over the long-term.

As Ray Dalio once quipped:

Such is why every great investor in history, in different forms, has one basic investing rule in common:

The reason is simple; if you lose your capital, you are out of the game.

Many young investors will eventually gain a lot of experience by giving most of their money away to those with experience.

It is one of the oldest stories on Wall Street.