It may be a bit morbid, but consider the targeting of missiles for a moment. One broad strategy is called counter-value; the value, of course, is people. This is the sanitized way that targeting urban centers is discussed. The alternative is counter-force, the force being the enemy’s missiles. Counter-force sounds like a more humane targeting strategy, but it requires a precision that is both knowledge and capital-intensive. Counter-value targeting does not have to be very exact. Close enough may suffice. It requires fewer technological advances and is cheaper.

The significance of a counter-force strike is that it can prevent an adversary from making a retaliatory strike. The US progress in developing counterforce targeting strategy plus its increasingly sophisticated missile defense capability is subtly shifting the nuclear equilibrium in its favor. Up to now, the balance has been preserved by confidence in second-strike capability. Therein lies deterrence, the ability to launch a retaliatory strike. This is precisely why initially missile defenses were limited by treaty and why the US has been chipping away at it for more than 30 years.

Economists often pretend counter-force capability but really deliver counter-value via their forecasts. Their quantitative forecasts give the impression of precision that is unjustifiable based on performance. Every so often, some smart economist or strategist lambasts officials’ forecasts, like central bank inflation projections or a multilateral’s GDP forecasts. It is easy to scoff at such predictions, but the question is compared to what? Many banks hire former central bank economists, who take or re-create their models. Moreover, private and public sector economists often go to the same schools, study from the same textbooks, and draw on the same news sources.

Nearly every business day, there are economic reports generated by the US government. It seems to publish more data than any other country. There are also non-government reports, such as the ADP private-sector employment estimate, the Institute for Supply Management (ISM), and Purchasing Managers Index (PMI). Some housing data comes from industry associations rather than the government. Many economists also look at Boeing’s (NYSE:) order data (4 in January down from 90 in December) to help forecast durable goods orders, for example.

The data are reported either shortly before or during hours that the stock market is open. One former US Treasury official once complained that China releases some data on the weekend. Who’s interest is to produce an extensive array of high-frequency data and to make it available around the trading session? That there are numerous economic reports clearly aids private and public sector decision-makers. However, the timing of the releases does not help long-term investors or business decision-makers, or the Federal Reserve or the US Treasury.

The chief beneficiaries are speculators and short-term market participants, for whom trading has compelling parallels to gambling. In fact, some UK bookmakers allow wagers on market developments, like where the will be on a set date or the against the . The equity culture and the financialization of the economy lend themselves to blurring the distinction between gambling and investment. Risk assessment and management are key skills in both activities. If an unscientific survey of bankers, asset managers, and personal experience is anything to go by, many straddle both worlds effortlessly.

As if the current data were not sufficient, alternative data has become more popular. Consider inflation. The Billion Prices Project describes itself as an “academic initiative to improve macroeconomic measurement.” The project scours the internet for retail prices and uses it to analyze international economics. It is easy to see how that would help tease out economic relationships. Yet, changing inflation dynamics that have frustrated central banks for years before the pandemic is not a measuring problem. Other data sources can be fascinating and may require outside the box thinking. Still, the most intractable challenges that vex policymakers, businesses, and investors are not solved by tweaks in prices’ metrics. Dare one say they are qualitative in nature. 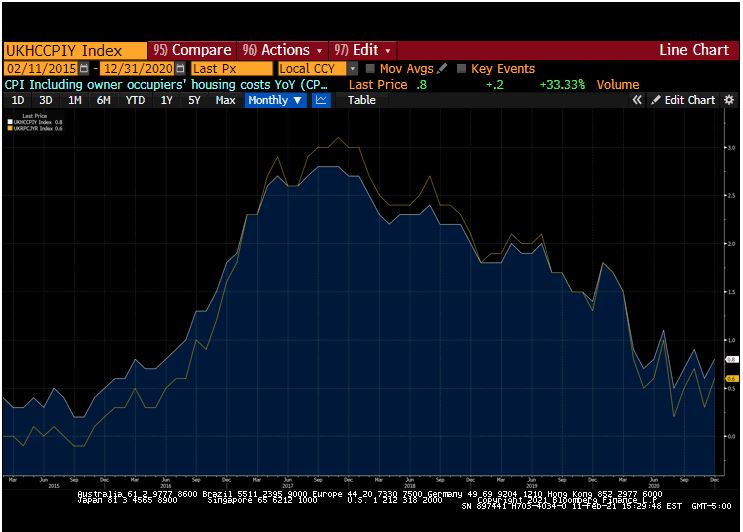 That said, a couple of years ago, the UK added owner-occupiers’ housing costs to GDP. It seems reasonable. The US does. The ECB is mulling it over as it reviews its policy and tools. The yellow line on the chart here shows the UK’s CPIH, as it is known, for including such housing costs. The previous measure of inflation, using the harmonized EU methodology, is the white line. The debate over negative interest rates and policy trajectory does not turn on the difference between the two measures.

Criticism of the GDP calculations seems to support a cottage industry. One of the significant problems is that it does not capture non-market activities. It is not the activity but how it is done. If you clean your house, it does nothing, but if you clean your neighbor’s house and are paid, you contributed to GDP. Thank you.

Let’s see if we can bring these considerations to bear as we turn our attention to upcoming high-frequency economic reports. In broad strokes, the data will show a widening economic divergence between the US, on the one hand, and Europe and Japan on the other. The extent of the divergence depends on the particular metric one uses. The direction, though, is more important than the precise measure. The divergence was evident in Q4 when the grew almost 1% on the quarter while the contracted.

The may have grown by around 2.5% in Q4 (to be reported on February 14), but there are two mitigating factors. First, in 2020, the US economy appears to have contracted by 2.5% year-over-year. The Japanese output probably shrank twice as much. Second, Japan’s economy seems to be contracting again here in Q1, the US continues to expand. Three Federal Reserve branches publish models that track the economy rather than forecast per se, which is also a relatively new approach. The average of these puts Q1 21 GDP a little more than 2% quarter-over-quarter or 8.8% at an annualized rate.

The divergence between the US and most other countries is the real takeaway, and the precise measurements of that divergence do not seem particularly interesting or important. The high-frequency economic data will simply bear this out, and next week, the first readings for this month will be reported. The preliminary February PMIs are due. The will be below the 50 boom/bust level for the fourth consecutive month. Japan’s composite PMI has not been above 50 since January 2020. In contrast, the may soften a little, but it is at its highest level in years.

Even more importantly, take a look at the fiscal pipeline. For the sake of argument, say that the fiscal package that is ultimately passed by the US’s reconciliation process is worth about $1.5 trillion. On top of the $900 bln in December, it puts the added stimulus at more than 10% of GDP. Everyone is excited about the European Recovery Fund of 750 bln euros that countries are still working up the application process, which may last a couple of more months. It is roughly the equivalent of US stimulus in December and slower to rollout. The first disbursement might be closer to the middle of the year, which would probably also make it pro-cyclical.

An hour before Japan’s is reported, the government will report January figures. It probably won’t, but it should help inform the US debate about inflation. Japan’s debt-to-GDP is more than twice the US ratio. It ran a budget deficit of around 10.5% of GDP in 2020, and this year’s shortfall is likely to be more than 8%. Japan’s CPI fell 1.2% year-over-year in December, the greatest deflationary reading since 2010. Even when fresh food and energy are excluded, Japan continues to experience deflation. It was negative year-over-year and finished at 0.4% in December, the lowest in seven years. Knowing Japan’s deficit, debt, or growth of the monetary base or money supply has not helped forecast Japan’s inflation.

Precision counts when you are making a machine tool or writing code, for example. Adding dot-com to a name once enhanced perceived value like adding blockchain or crypto may now. In a parallel fashion, by giving the appearance of quantitative precision, economists enhance the perceived rigor and “scientific” aurora of their forecasts. Yet, the macro-economic signal is broad, and there is much noise around the signal. The counter-force appearance is often misleading, but what can be delivered is counter-value.