The main event on this week’s agenda may be the testimony of Fed Chair and US Treasury Secretary Yellen before Congress. We will also get to hear from ECB President , BoE Governor and BoC Governor , who will speak at a conference organized by the Bank for International Settlements. We also have a central bank deciding on monetary policy this week, and this is the .

On Monday, we don’t have many top-tier indicators on the agenda. The only one worth mentioning is the US for February, with expectations pointing to a 3.0% mom decline after a 0.6% rise in January.

On Tuesday, Fed Chair Jerome Powell and US Treasury Secretary Janet Yellen will testify before the House Financial Services Committee, where they expected to discuss the economic recovery and how effective monetary and fiscal policies have been. They will present the same testimony before the Senate Banking Committee on Wednesday.

Market participants may be on the lookout for comments on the latest surge in US Treasury yields, but given that we already heard both officials’ opinion on the matter, we don’t expect any surprises. Yellen’s opinion is that the rise in bond yields represents a robust economic recovery and she does not believe that the economy will run too hot. Powell’s view is that any spike in inflation in the months to come is likely to prove to be temporary, and that inflation will meet the Fed’s goal in the years after 2023.

Remember that at the press conference following last week’s meeting, he noted that it is too early to start discussing tapering QE, while the updated dot plot pointed to no rate hikes even in 2023. With all that in mind, a reiteration of those views may eventually convince some market participants that no normalization is on the cards soon, and thereby support equities. At the same time, the may come under selling interest. 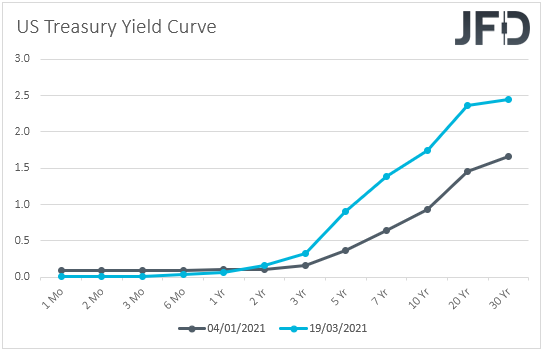 Later in the day, we have the US for February, which are expected to have fallen 6.5% mom after rising 4.3% in January.

On Wednesday, apart from Powell’s and Yellen’s testimony before the Senate Banking Committee, we also have the UK CPIs for February and the preliminary PMIs for March from the Eurozone, the UK, and the US.

Getting the ball rolling with the UK CPIs, the is expected to have ticked up to +0.8% yoy from +0.7%, while the one is anticipated to have held steady at +1.4% yoy. At last week’s gathering, BoE policymakers kept their monetary policy settings unchanged, and noted that the recent plans for easing of covid-related restrictions may be consistent with a slightly stronger outlook for consumption growth.

However, they repeated that the outlook for the economy remains unusually uncertain and that if the inflation outlook weakens, they stand ready to take the necessary action. In our view, a slight rise in the headline CPI rate and a steady core one may work against a weaker inflation outlook and thereby reduce the chances for more easing by this Bank.

Combined with the fact that the covid vaccinations proceed very well in the UK, this could help the to continue performing well, especially against the safe-havens and , which we expect to come back under selling interest, due to an improved market sentiment. 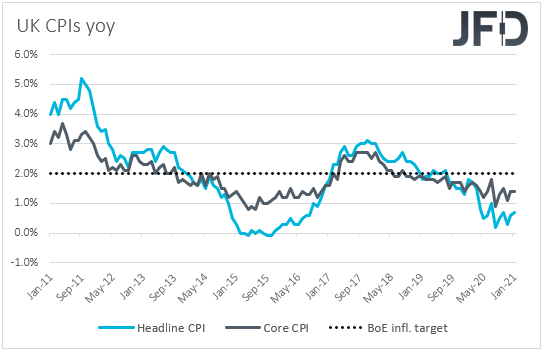 Passing the ball to the PMIs, in Eurozone, the index is forecast to have risen to 58.1 from 57.9, while the one is expected to have inched up to 46.0 from 45.7. This is likely to take the index up to 49.1 from 48.8. Although an improvement, this still points to contraction, which combined with a chaotic vaccine rollout across the continent, is unlikely to result in enough optimism to boost much European equities and the common currency.

No forecasts are available for the UK prints, while in the US, both the and PMIs are anticipated to have risen to 59.4 and 60.2, from 58.6 and 59.8 respectively. This will confirm that the economic recovery in the US continues at a fast pace, but the big question is whether it will revive inflation fears.

If investors rely on Powell’s and Yellen’s potentially reassuring remarks, equities may gain, while the opposite may be true if they remain convinced that the quick recovery will lead to an overheating economy. 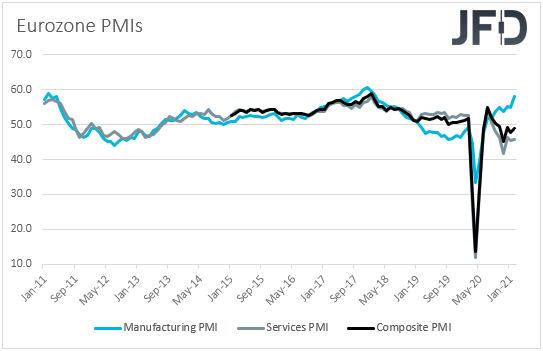 On Thursday, we have a central bank deciding on monetary policy and this is the SNB. The last gathering of this Bank was back in December, which resulted in no fireworks. The Bank kept its policy unchanged, reiterating that the Swiss franc remains highly valued and that they are willing to intervene more strongly in the FX market.

Given the latest surge in bond yields around the world, we don’t believe that the SNB will risk sounding less dovish, as this may result in a stronger franc, something that they don’t want to. Thus, we expect policymakers to keep policy steady and maintain their willingness to intervene when deemed necessary.

Later in the day, we have the final US for Q4, which is just expected to confirm its second estimate of +4.1% qoq SAAR.

We will also get to hear from ECB President Christine Lagarde, BoE Governor Andrew Bailey, and BoC Governor Tiff Macklem, who will speak at a four-day conference, which starts on Monday, and is organized by the Bank for International Settlements. Although the topic will be on innovation in the digital age, we believe that, once again, market participants may be on the lookout for comments on the surging yields.

That said, the only official we expect to sound worried on the matter is ECB President Lagarde. The BoE and the BoC share the relaxed views of the Fed on the matter. Thus, following the ECB’s decision to accelerate its Pandemic Emergency Purchase Program at its latest gathering, most of the attention may fall on Lagarde for any hints with regards to whether she and her colleagues are considering more action in order to stop any unwarranted rise in debt financing costs.

Finally, on Friday, during the Asian session, the Tokyo CPIs for March are due to be released. No forecast is available for the headline rate, while the one is expected to have ticked up to -0.2% yoy from -0.3%.

During the early European session, the UK for February are coming out, with both headline and sales expected to have rebounded 2.2% mom and 2.0% mom, after sliding 8.2% and 8.8% respectively.

Germany’s for March is also coming out. The current assessment index is anticipated to have risen to 91.3 from 90.6, while the business expectations one is forecast to have inched up to 95.2 from 94.2. This is likely to drive the business climate index up to 93.2 from 92.4.

The preliminary UoM consumer sentiment index for March is also coming out and the forecast points to a fractional increase to 83.5 from 83.0.