A little end-of-the-month profit-taking appears to be taking its toll early Monday, but November is still the first month since August with gains for the major indices and remains on track to be the best for the in 33 years. The question is, what can Wall Street do for a follow-up?

Considering how November’s scorching advance came against a backdrop of rising COVID-19 cases and softening economic data, it might be difficult to keep up this pace. However, it’s been tough most of the year for investors who chose to doubt the rally. Ask anyone who sold in March and didn’t come back into the market.

It’s Cyber Monday, and word from weekend and Black Friday shopping is that traffic was down about 50% from normal. But anecdotally, people are saying sales weren’t down that much. Why not? Because the people who actually ventured out to stores were there to buy. They didn’t go just to look or to enjoy the holiday atmosphere. Online sales also looked pretty solid. More statistics could start to roll in soon and give us a better picture.

The last three Mondays began with positive vaccine news and today was no different as Moderna (NASDAQ:) said its product is more than 94% effective. As far as the effect on the market, though, we’re reaching a point of diminishing returns when it comes to news like this until there’s an actual distribution plan and the vaccines start getting delivered. The news is fantastic, but investors might be asking, “OK, but what now?”

The Cboe Volatility Index () made new post-pandemic lows below 21 on Friday, though this might just reflect holiday trading. If you look further out into January, VIX futures are 10% above spot levels, so it’s not like VIX is telling us everything looks great going forward. VIX is another place to monitor if geopolitical tensions start to climb. It started out the week with a pretty decent move higher and is back to nearly 22 early Monday. It’s not like it’s rocketing, but it does suggest maybe it got a little too far off to the downside last week. Crude is still holding $45 a barrel as OPEC meets today and is expected to leave production cuts unchanged, and the dollar is near its lowest point since last summer.

The new week began with some decent economic news from Asia. China’s November manufacturing activity expanded for the ninth straight month as the Purchasing Managers’ Index (PMI) came in at 52.1, above 51.4 in October. This is the sort of news that tends to help the U.S. Tech sector since it has so much exposure to the Chinese economy.

Back To Work With Lots Of Data

Surveying the days ahead, it’s back to work with plenty of fresh data to digest now that the holiday is over. Nothing stands out more than Friday’s monthly payrolls report. The last two weeks both saw rising jobless claims, suggesting the recovery has slowed. October recorded 638,000 new jobs, but the headline figure is down several months in a row, and some analysts even wonder if eventually it could go negative. We’ll talk more later this week about what kind of numbers analysts expect payrolls to bring and what might be significant to watch.

Other key reports this week include Chicago PMI this morning and monthly ISM manufacturing on Tuesday. The ISM could be interesting, considering how strong it was in October at a headline figure of 59.3%—the best in two years. Analysts expect a slight drop to 58% in November, according to research firm Briefing.com. Any sign of a more dramatic pullback might raise concerns that lack of government stimulus and rising virus cases have started a negative blowback. Weakness there could get reflected in some of the same cyclical sectors that helped lead the recent rally. We’re talking Industrials, Materials, and Energy. Sometimes ISM can have an immediate impact on the market, so be ready at 10 a.m. ET Tuesday.

And speaking of data, two market data powerhouses—S&P Global (SPGI) and IHS Markit (INFO)—look to be joining under one roof, with SPGI agreeing to acquire INFO in a deal worth $44 billion, according to media reports. Data has become big business in recent years, particularly in licensing, data storage, regulatory filings, and other data management services.

On the earnings front, look for results from Dow Jones Industrial Average component Salesforce.com (NYSE:) on Tuesday after the close. Aside from the standard scrutiny of the numbers, analysts will also have their ears perked for any comments regarding recent talks to buy business messaging mainstay Slack Technologies (NYSE:). In addition, Carnival (NYSE:), Dollar General (NYSE:) and Kroger (NYSE:) are expected to report later this week.

Did you spend a lot of time in Zoom (NASDAQ:) meetings during the quarter? This afternoon you get a chance to find out how much money they made off of you and everyone else who adopted the technology. They report after the close. Shares of ZM are already up more than 500% this year. It’s quite likely no one expected that going into 2020. The question is how do they build on that in 2021. Some analysts forecast a slowdown, but remember, once new habits are formed in the technology space, it’s often hard to convince people to stop what they’re doing.

There’s even a bit of Fed news mixed in. Tomorrow, Fed Chairman Jerome Powell is scheduled to testify before the Senate Banking Committee on the topic of March’s $2.2 trillion Cares Act. The Fed also releases its beige book on Wednesday to provide an update on how various U.S. regional economies are coming along. 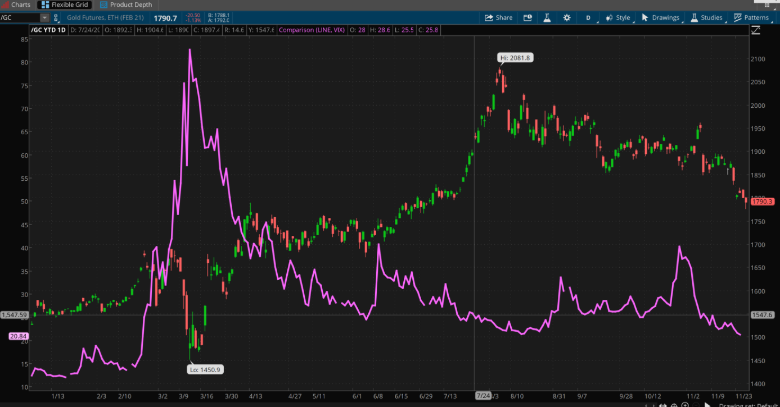 CHART OF THE DAY: RISK HORSEMEN REINED IN. Two of the three “horsemen of risk” reached long-term lows Friday, as this year-to-date chart of gold (/GC—candlestick) and the Cboe Volatility Index (VIX—purple line) demonstrates. Optimism about the 2021 economy likely plays a role in both of the pullbacks from highs earlier this year. Data Sources: CME Group (NASDAQ:), Cboe Global Markets (NYSE:). Chart source: The thinkorswim® platform from TD Ameritrade (NASDAQ:). For illustrative purposes only. Past performance does not guarantee future results.

Is Taxman Hovering? Since it’s the last day of November, this is a good time to consider what sometimes happens in December, namely profit-taking. We’ve had an amazing run since the March lows, but one thing that’s a bit concerning in the final month of the year is the possibility of some people in the markets going “risk-off” and unwinding some positions. Now to be fair, there hasn’t been much sign of that in the final days of November, which you sometimes see. In fact, the market went up last week in relatively high volume, which was surprising and positive considering the holiday. But as December rolls on, the market might come under pressure as people take profit before the end of the year. If you’re a long-term investor, in fact, December is a good time to look over your positions, make sure they still match your long-term plans, and consider whether it might make sense to harvest some losses.

The “Froth” Meter: With the major indices all at or near record highs to end the month, one question a lot of people ask is whether there’s “froth” in the market. By traditional standards like price-to-earnings (P/E) ratios, you could argue there is. The has a forward P/E of 22.6, according to research firm CFRA, compared with historic averages of around 16. Sectors at 25 or more include Energy, Consumer Discretionary, Real Estate, Info Tech, and Industrials, or five of the 11 S&P sectors. Only Utilities, Financials, and Health Care are below 20. While you could argue that valuations are high, some analysts suggest that the Fed’s zero interest rate policy could allow for premium valuations to persist. The danger is if bond prices start to slip and yields rise, which as we saw in late 2018 can be tough on highly-valued sectors. However, every recent rally in bond yields has hit solid resistance.

One school of thought suggests that the recent flat-line in tech stocks is a sign that investors see the sector as being “frothy.” On the other hand, the chipmakers continue to have amazing demand overall and have had a pretty nice run in the market since mid-November even while some traditional FAANG stocks chop around. The least “frothy” sector by P/E value is Financials, with a P/E below 15. Financials have had every single headwind thrown at them, but they’re like a great fighter that gets punched and punched and won’t go down. If we do see rates go up, that could mean upside for the Financials.

Two of “Three Musketeers” Lay Down Their Arms: At least two of the “three musketeers” of risk have been retreating lately, perhaps a sign that “risk-on” trading has a chance to continue into the new week. Those three musketeers are gold, bonds, and volatility. Only bonds showed strength last week.

It may be a stretch to say gold has collapsed since climbing above $2,000 an ounce in early August. However, it is in correction territory, down double-digits from its highs with Friday’s drop below $1,790. That was the first time since early July to see a sub-$1,800 close, and it may come as rough news for some Materials stocks. Many investors use gold as a risk implement, buying up the shiny metal when the economy looks like it’s suffering. Optimism about reopening once a vaccine becomes widespread probably helps explain gold’s recent setback.

One odd thing is to see the softness in gold moving in tandem with softness in the U.S. dollar. They usually go opposite directions. This time, the dollar’s weakness might reflect ideas that investors could decide to move their money out of more defensive U.S. assets and into overseas stocks and bonds if the virus can be tackled.

Disclaimer: TD Ameritrade® commentary for educational purposes only. Member SIPC. Options involve risks and are not suitable for all investors. Please read Characteristics and Risks of Standardized Options.