A host of themes, including missed earnings, valuation concerns, the rate of contagion of COVID-19 as well as vaccine delays, weighed on , , and futures on Thursday. On the other hand, contracts on the managed to trade in positive territory.

Yields remain under pressure and gold fell for the sixth consecutive day.

US contracts on the S&P and NASDAQ fell on disappointing earnings from mega-cap tech player Tesla (NASDAQ:), dispelling our and prompting an aftermarket selloff. Apple (NASDAQ:) earnings surpassed expectations, but the shares fell on valuation concerns.

In Europe, the Index dropped out of the gate, as traders navigated disappointing earnings from Swatch Group (SIX:) and dramatic revenue declines at EasyJet (LON:) versus earnings beats for chipmaker STMicroelectronics (PA:) and alcoholic beverage maker Diageo (LON:).

Perhaps what tilted the scale downward is the ongoing disagreement between the EU and AstraZeneca (NASDAQ:) on vaccine supply and the resultant in the European rollout.

As the next session up after Wednesday’s significant selloff in the US, Asian shares took a beating this morning, with the pessimism that pervaded Wall Street transfered to regional markets. The seesaw of expectations between the likelihood of a recovery of economies ravaged by the most horrific health crisis in 100 years versus ongoing stifling social restrictions, escalated with the UK and Norway introducing new restrictions on visitors’ entry on concerns about new strains of the virus.

It is unclear, however, whether these selloffs express the expectation that corporate earnings will disappoint because of the coronavirus, or whether traders just don’t care how well companies fared in the previous quarter, and are now more focused on finding the end of the dark tunnel that has been lengthened by new, more contagious and more lethal strains of COVID-19.

Hong Kong’s dropped 2.5%, posting the worst decline in more than 8 months as lack of liquidity exacerbated the sour mood after the steepest US market slump in months.

US equity losses after yesterday’s closing bell continued as concerns of overstretched valuations returned to the fore, weighing particularly on ETFs. The Index registered the worst decline since October, shedding 2.6% of its value as the Fed interest rate did not include the promise of more economic support. All 11 sectors were at least 1.3% deep in the red, with as much as 3.25% lower.

In its continuing balancing act, the Fed made clear it will not stop its already gargantuan support of the US economy, propelling Treasuries higher, weighing on yields, pushing them back below the 1% mark.

Yields dropped for the fourth straight day, blowing out a bullish pennant, retracing much of its preceding spike. 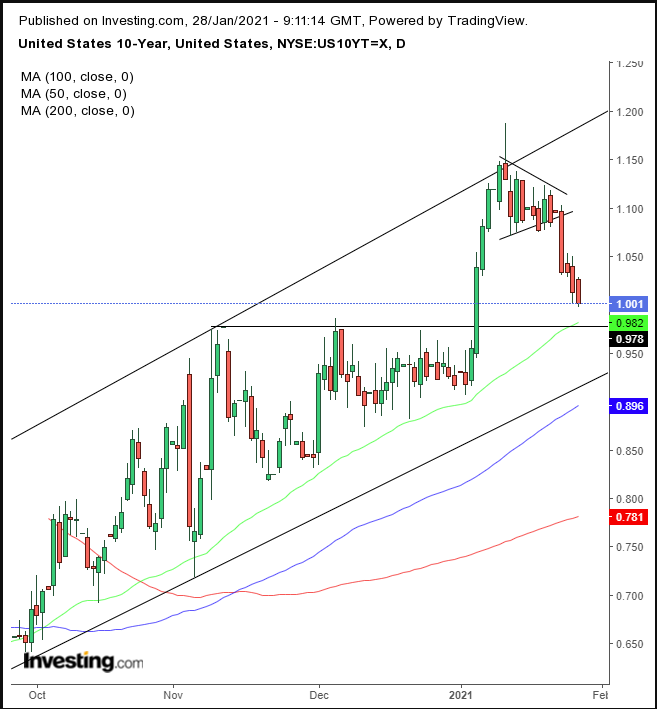 The 0.99% level will be its next test, as the November-December highs converge with the 50 MA above the bottom of a rising channel.

The built on yesterday’s biggest gains since September, as the greenback attempted to bottom. 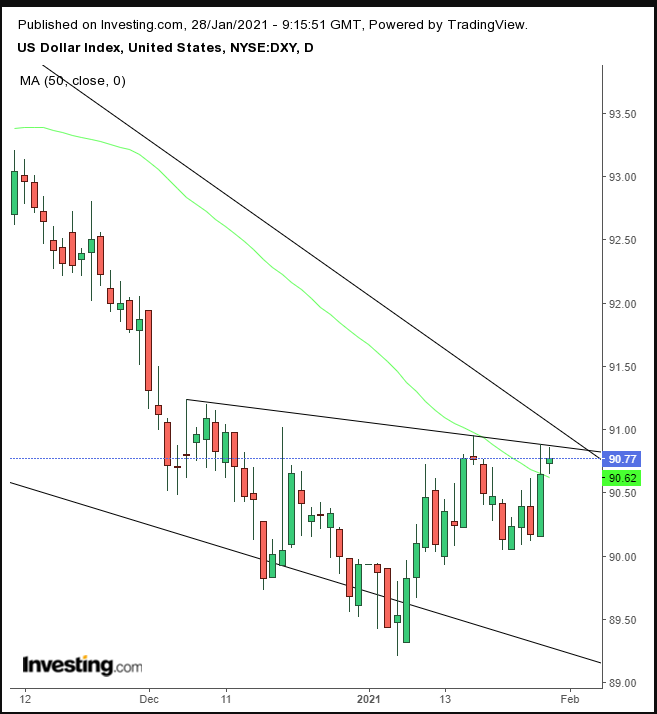 The USD retested the H&S neckline for the second straight day. An upside would include the completion of a massive bullish pattern.

continued its decline, after hitting the top of a falling channel since the March high, as the 50 DMA crossed below the 200 DMA triggering a Death Cross, and the RSI and MACD appear to be ready to register bearish signals. 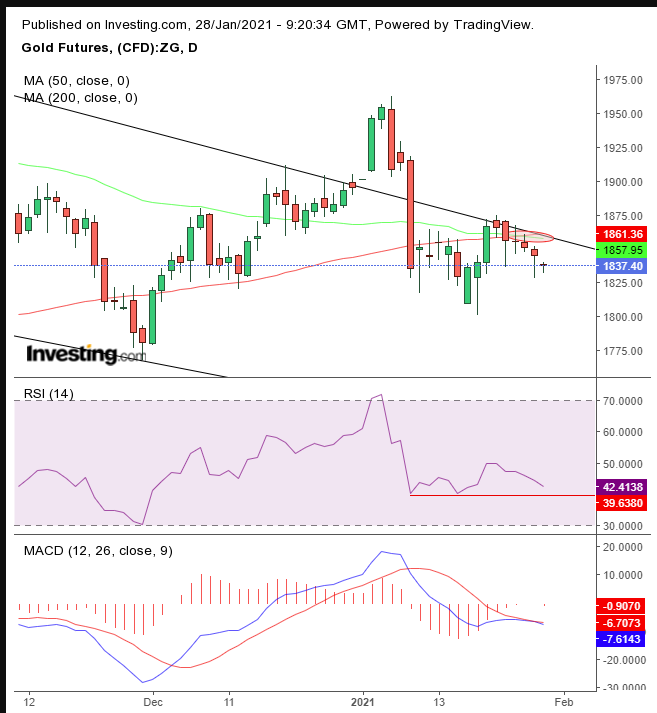 This bearish view on gold corresponds to the bullish view on the dollar.

Investment bank Guggenheim’s Scott Minerd claims institutional demand can’t justify ’s price, but if our interpretation of a falling flag is right, and it completes with an upside breakout, it will head toward the $50,000 mark.

is struggling between the profit-taking range of a falling-flag and the price’s uptrend since the Nov. 2 bottom. 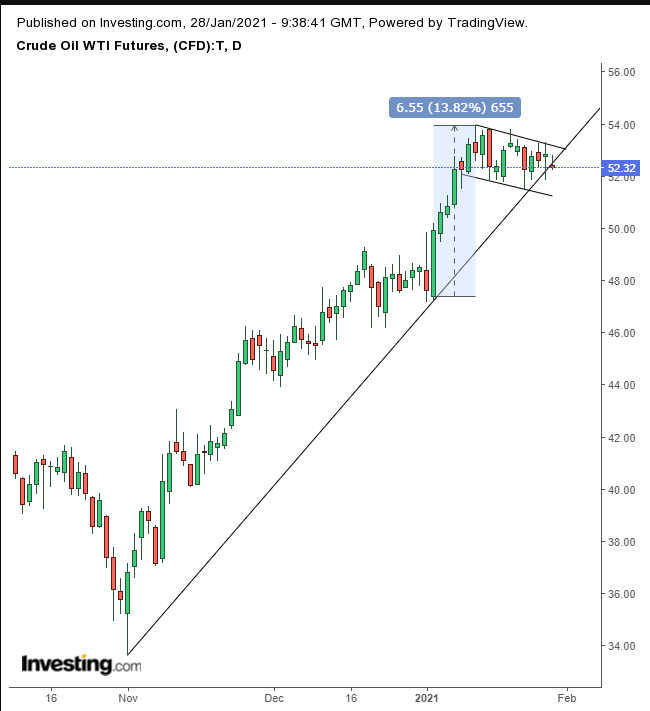 An upside breakout will signal a rally to $60. However, the Biden administration to pause all new oil and leases on federal lands may also drive the future price.