Global stocks and US futures advanced on Tuesday on renewed hopes of additional US economic stimulus, momentum in the vaccination rollout program and market stabilization after the battle between retail and professional traders that began last week. Contracts on the , , and continued to move higher after the underlying indices closed in the green on Monday.

Both gold and the dollar fell.

Yesterday, the long end of the Treasury yield curve the most since 2016, a visual display of the confidence in the economic recovery, as global markets stabilized from the recent Reddit fueled onslaught on hedge funds short in GameStop (NYSE:) and other stocks. However, there appears to be calm for now, but considerable confusion remains in the media.

News networks reported that Monday’s spike in prices to 10-year highs was the result of another short squeeze provoked by investors who’ve been dubbed the “Reddit army” because of the social media platform they’ve been using to egg each other on. Sure enough, everything silver spiked, including the physical commodity, options contracts, ETFs and mining stocks, as the news went viral.

Silver’s performance continues to raise concerns that the wild whipsaws will spill over into the broader market and be the final catalyst for a crash.

S&P 500 contracts built on the underlying index’s 1.6% rebound on Monday from its worst drop since October. GameStop), the stock that was the spearhead of the so-called Redditt frenzy, extended its decline in pre-market trading on Tuesday.

The one constant in all this has been technology shares. The sector continues to outperform the broader market. NASDAQ 100 futures are ahead of contracts on the S&P 500 and Dow, and in Europe, the Index climbed with technology shares. 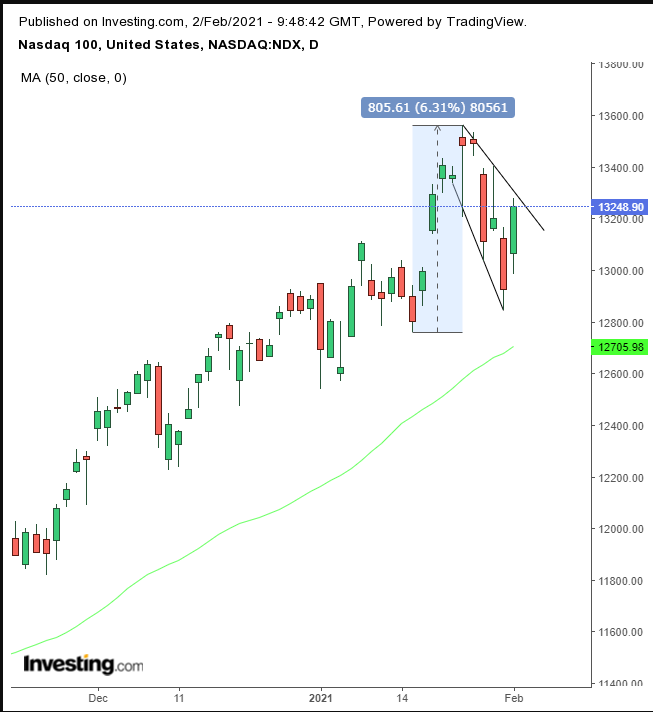 The appears to be forming a falling flag, bullish after a preceding 6.3% surge within six sessions. Its upside breakout would signal a 14,000 target.

On Monday, US stocks enjoyed their biggest boost in 10 weeks after analysts assuaged concerns that the spike in retail speculation will topple the market. The tech sector led the advance with the NASDAQ 100 up 2.5% ahead of (NASDAQ:) and (NASDAQ:) earnings results. Tesla (NASDAQ:) jumped 5.8% after an analyst more than doubled its price target.

There seems to be headway on additional economic stimulus in the US with President Joseph Biden resuming meetings on the subject. He is reportedly keen to push it through, with or without bipartisan agreement.

The US hit a positive COVID milestone. More Americans have now received at least one dose of the vaccine than those that have tested positive for coronavirus. 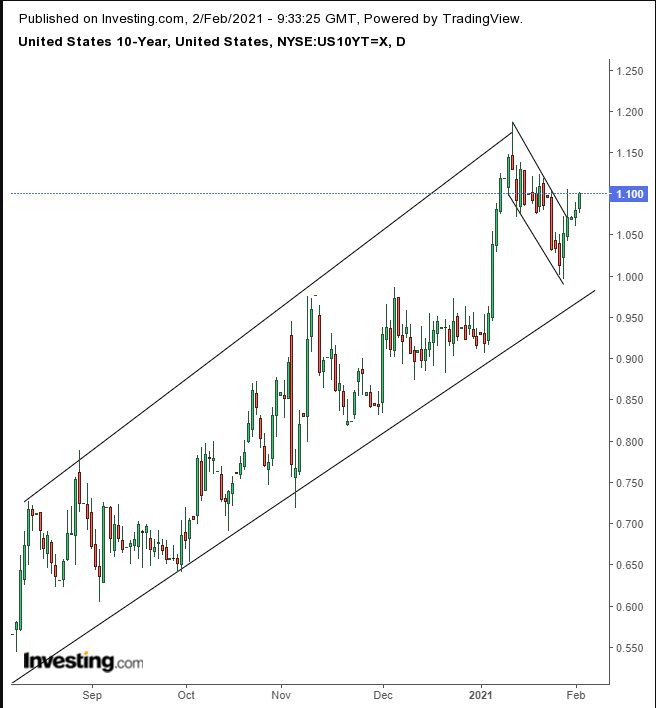 The move signaled a resumption of the rising channel, as increasing investor confidence allows them to go back into equities. 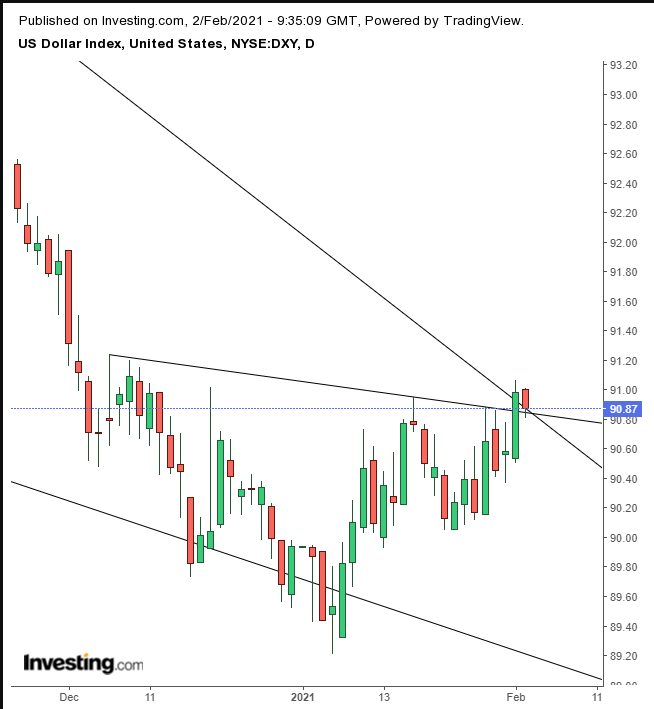 However, the greenback found support above the neckline of a H&S bottom and falling wedge top, after breaking out of both on Monday.

fell but found support at the bottom of a rising flag, bearish after the preceding plunge back into the falling channel. 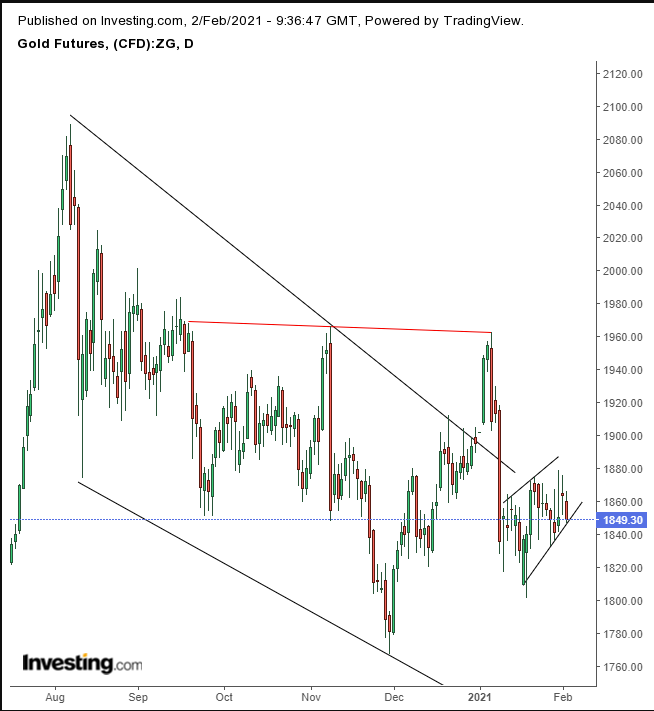 On the other hand, the price of the precious metal may also be developing a H&S bottom. 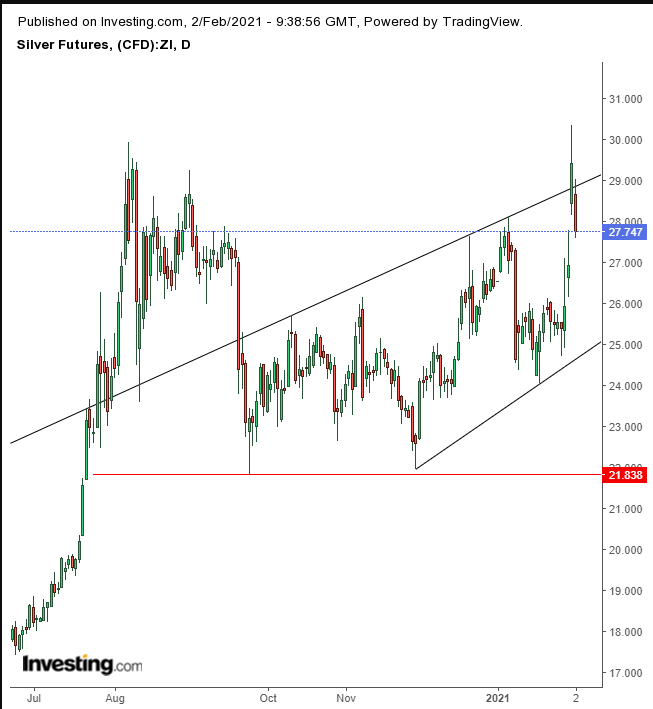 However, we consider it a buying dip, within a rising channel, although if that fails, it could become a double top.

appears to be completing a falling flag. 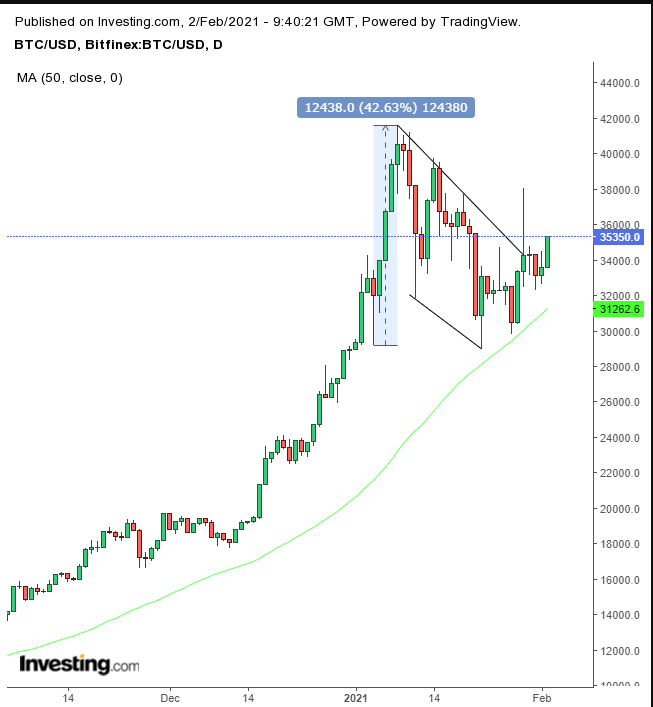 The cryptocurrency seems to be setting its sites on the $50,000 mark.

is rising for the second day for a variety of reasons; OPEC+’s pledge and follow-through; a weak dollar; and broader market enthusiasm due to vaccine progress amid the slow down of the spread of the coronavirus. 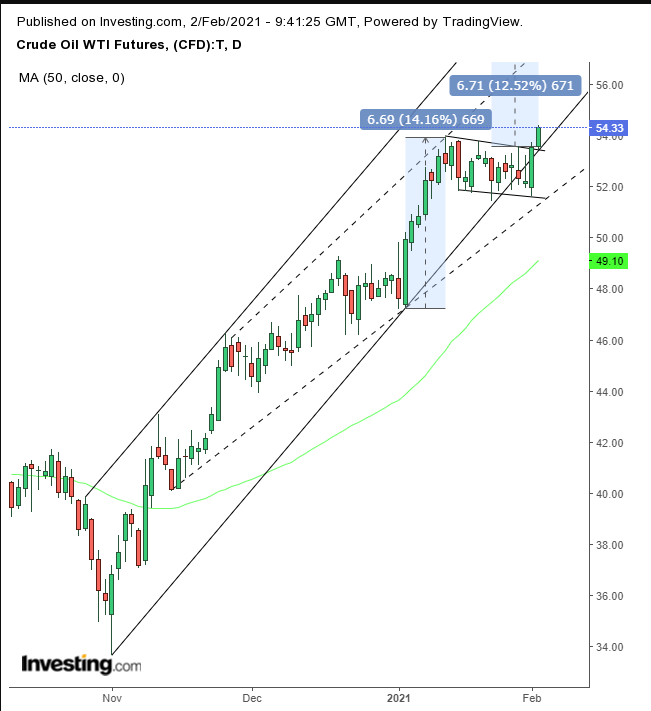 Oil completed a falling flag, aiming for the $60 per barrel.