Futures on the , , and , as well as European shares oscillated ahead of the US session as investors searched for direction on Wednesday. The move comes after Tuesday’s massive rally in US stocks which saw significant gains in mega-tech shares including Tesla (NASDAQ:), Amazon (NASDAQ:) and Microsoft (NASDAQ:).

Gold posted a substantial boost while oil was flat.

In Europe this morning, the Index struggled to move higher at the open. The index was held back by fears inflation will slow a recovery, denting mining and travel stocks—two sectors dependent on reopening economies for growth. However, telecom and real estate shares helped the pan-European gauge push modestly higher.

Slowing Chinese demand for base metals also weighed on European markets as the world’s second largest economy slowed in the first two months of the year. The climbed 1.7% YoY, beating the median 1.5% forecast, reflecting inflation fears. However, those worries have yet to reach the Chinese consumer as the actually fell 0.2% YoY.

Should factory prices keep rising, they will inevitably reach consumers. The question is whether it will be an even pace, allowing the economy to utilize rising prices as energy to expand, or whether prices will rise too quickly, tightening investing along with consumer spending.

Meanwhile, in the US, the Treasury went off without a hitch, as yields remained steady below recent highs. However, sales of the longer-dated and issues today and tomorrow will determine how much appetite investors have for the safest debt. Any volatility could well spill into the rest of the financial markets.

Asian indexes painted a mixed picture, failing to jump on the express train arriving from Wall Street’s solid rally. Even stabilizing yields couldn’t garner substantial interest on account of investors concerns on tightening in China. The mixed inflation data left the flat at the end of a volatile session. Japan’s also ended little changed after a choppy day. Australia’s suffered a 0.8% drop after two days of gains.

In US trading on Tuesday, the surged 4%, suggesting investors sought the familiarity of the tried and tested technology sector which benefited from the strict lockdown rules during the global pandemic. However, the $1.9 trillion stimulus and continued rollout of the coronavirus vaccination has economists expecting a recovery.

From a technical perspective, we consider the rally a short squeeze and misguided dip-buying. We expect the tech-heavy benchmark to resume heading lower. Yesterday’s trading pattern supports our . 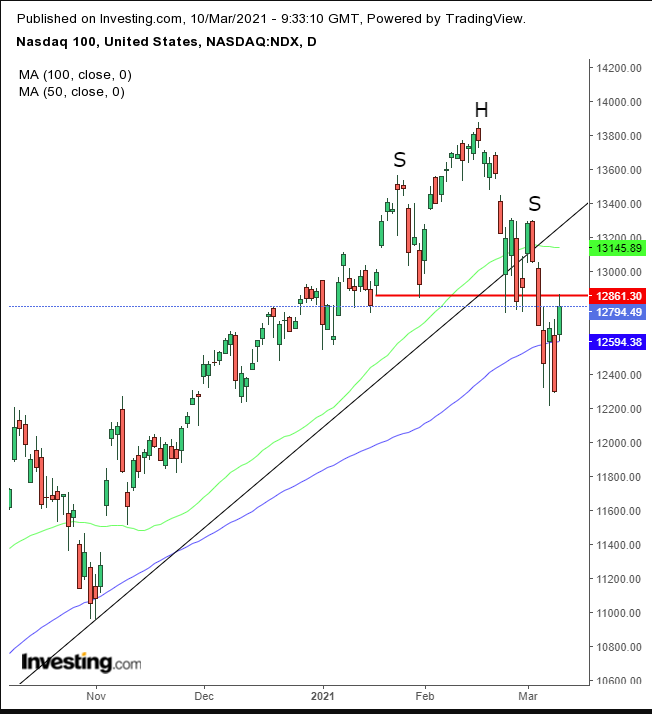 The NASDAQ 100 pared its daily highs upon reaching the neckline of a H&S top.

The found its footing in the form of a Bearish Engulfing pattern after yesterday’s drop. 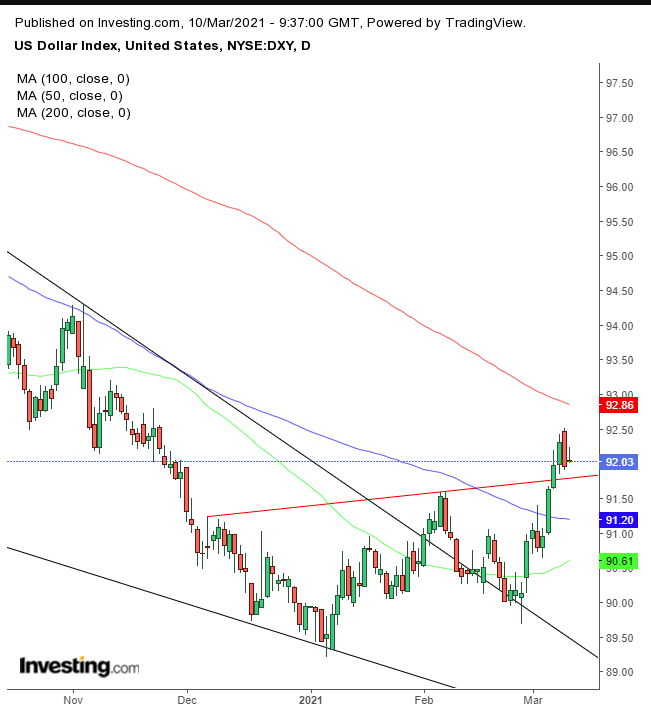 The greenback opened higher but still erased the entire advance from the previous day. While that’s a signal that bears are picking up momentum, this week the USD completed a double bottom, after completing a falling wedge since the March highs. Therefore, while we expect a potential corrective dip, we expect the dollar to keep rising toward 94.

saw a powerful bounce after touching the bottom of a falling channel for the first time since Nov. 30. 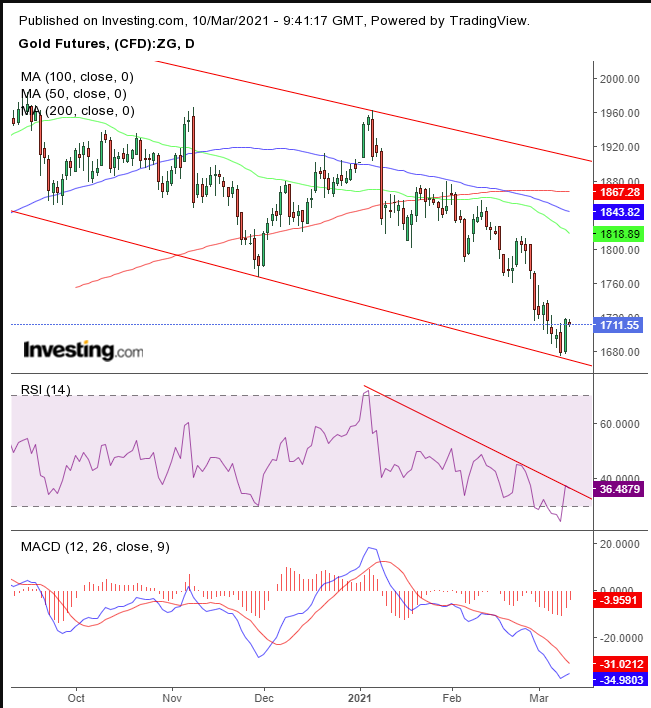 That line represents buying, which has been returning the yellow metal toward the extreme end within the rising channel. The RSI is testing its downtrend line, having rebounded from an oversold condition, while the MACD is turning for a bullish signal. The impetus of the trend, however, is lower, and therefore can always fall. One shouldn’t count on a return to the channel top. So, employ a sensible trade plan.

was little changed, having rebounded from an earlier dip, ahead of the EIA inventory later today.