Futures on the , and were marginally up ahead of the US session open on Tuesday after European stocks bucked the risk-off trend in Asia, after Swiss wealth manager UBS huge quarterly gains.

However, futures were slightly lower after the underlying index continued its meteoric rise on Monday as tech shares outperform.

The dollar continued its advance while yields fell.

US futures were wavering on Tuesday as concerns regarding the upcoming stimulus package were counterbalanced by strong results from European financials. There are some worries about the upcoming fiscal stimulus following Senate Majority Leader Chuck Schumer’s admission that funds won’t be released, possibly until mid-March.

President Joseph Biden also said he is open to negotiation on his $1.9 trillion fiscal aid package, weakening his position while signaling to traders that fiscal policy may not be as abundant as expected.

Earlier Tuesday, Asian shares fell amid worries about the new, more easily transmittable, and more dangerous, coronavirus variant. Another worry is whether existing vaccines will provide immunity to all the new strains being identified across the globe.

Hong Kong’s led regional stocks lower, slumping 2.5%, after the PBoC cut back liquidity amid a warning that assets are in a bubble. The financial hub took the brunt of the regional selloff with Chinese investors cashing out after investing $32 billion this year. The policy about-face coupled with the warning of a potential crash saw China’s close 1.5% lower.

US technology shares were in the lead in trading on Monday, ahead of earnings from in the sector this week. The added value with gains for Apple (NASDAQ:), Tesla (NASDAQ:) and Microsoft (NASDAQ:).

The managed to eke out gains even after US health officials warned about vaccination delays. 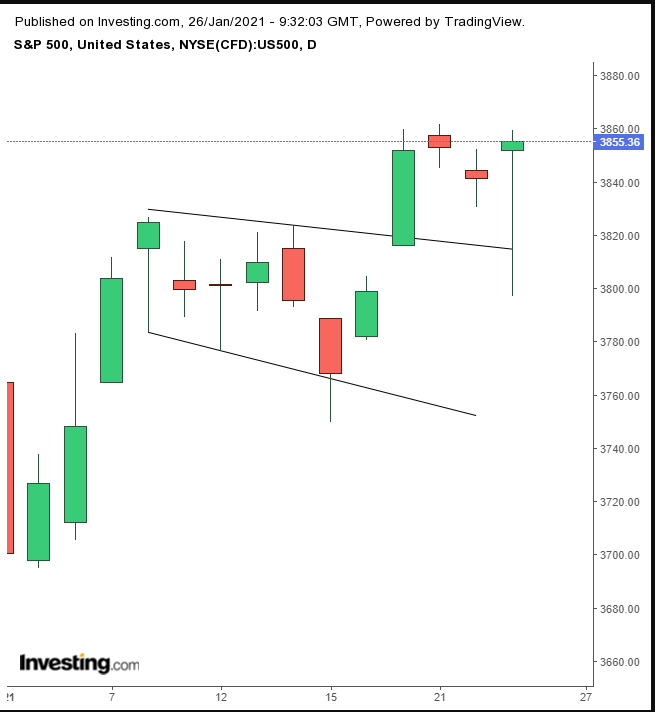 The SPX found support by its bullish flag.

The , volatility index, closed its rising gap, demonstrating that investors are calming down. 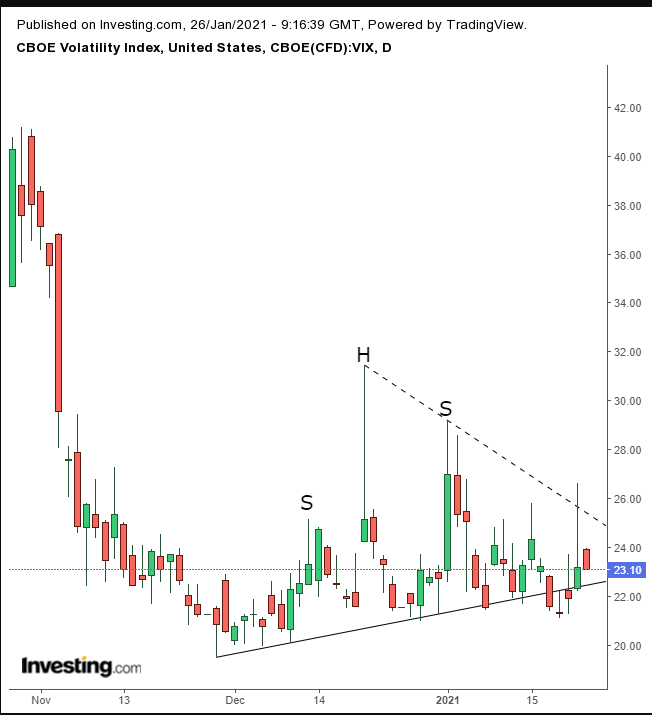 The “fear gauge” is now on track to potentially complete a H&S continuation pattern.

The same pattern is visible on the yield chart. 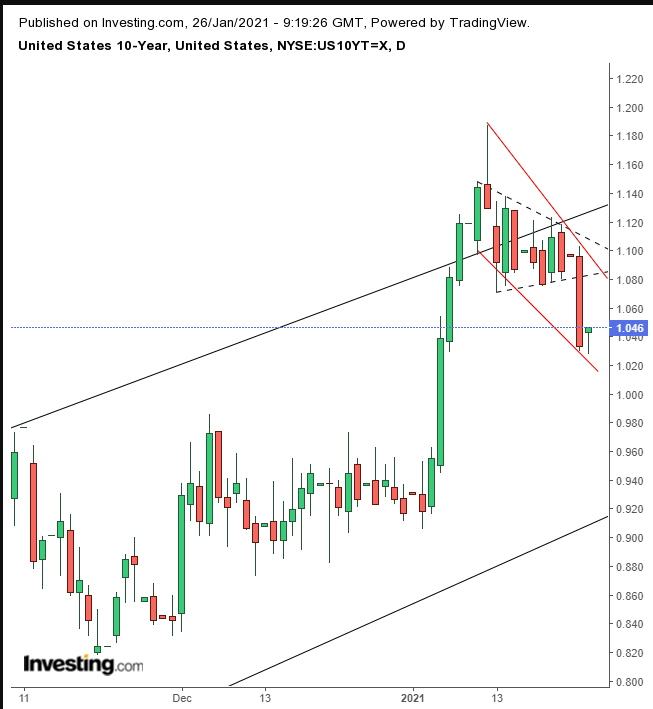 After the , yields fell out of what was set to be a bullish pennant (dotted black lines), but the revived mood keeps a bullish flag in play (red lines).

The is up for the third day, but has found resistance by the downtrend line (red) since Dec. 7, whose convergence with the (black) downtrend line since the March high raises the potential for a bottom. 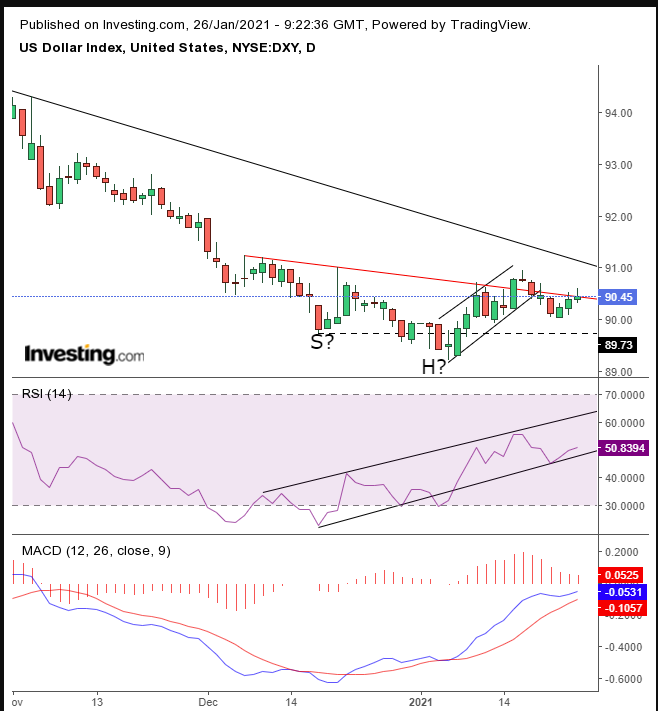 The price-based MACD and momentum-based RSI are gunning for such a reversal.

remains flat as it struggles between a rising, bearish flag, within a falling channel on one hand, and a potential H&S bottom, on the other. This range is a mirror image of the dollar. 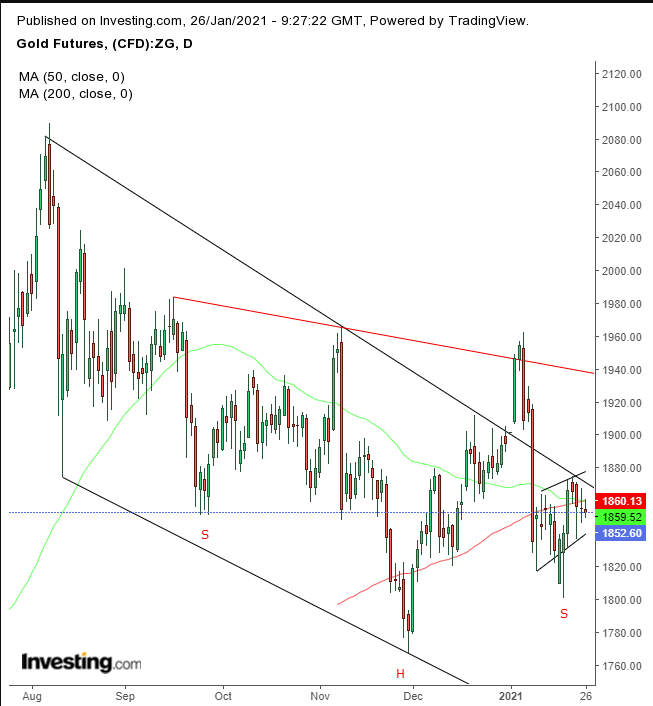 The yellow metal’s indecision is projected by the convergence of the 50 and 100 DMA, as they await “further instructions” to provide a bullish pounce or a Death Cross.

However, the precious metal is seen to be losing investments to , which is to top the psychological $50,000 level 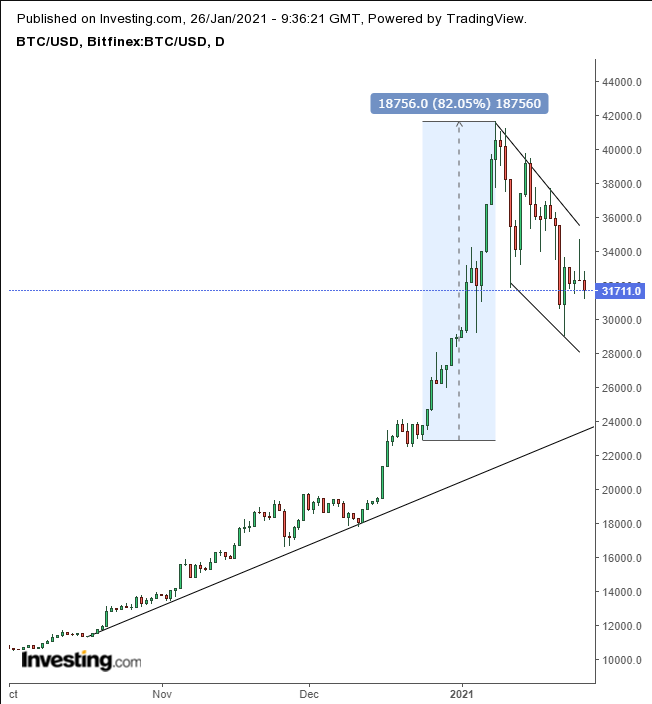 The chart may easily support that view, if the falling flag completes with an upside breakout.

Like stocks and yields, rebounded to extend a rally for the second day, as it vies to complete the falling flag, whose upside breakout will send it toward $60. In the short term, the oil price may be supported by President Biden’s stimulus, however longer-term the price may face . 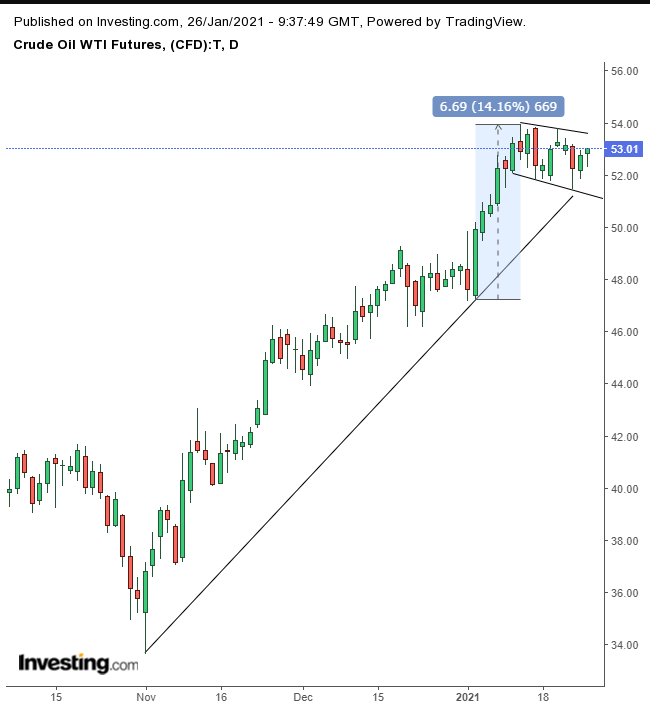