Futures contracts, including for the , , and , and European stocks advanced on Monday, boosted by positive news about US President Trump’s health and renewed hopes for a long-anticipated coronavirus economic relief package from Congress. Treasuries fell and oil retreated.

Although all major US indices closed lower on Friday, futures this morning are all trading in the green as markets are buoyed by news that President Trump may leave the hospital as early as today. The US president was admitted after the market closed on Friday, but over the weekend he tweeted that his health is improving and on Sunday afternoon in a motorcade to wave to supporters.

This followed a press conference with his medical team where they said his health was improving, and he could be discharged as early as Monday. This despite the news that they were administering a steroid generally provided only to the very sick, after his blood oxygen levels dropped twice.

On Friday, Wall Street opened down on the news that the US President had been diagnosed with COVID-19. But during the day’s trading, stocks on speculation that it was looking more likely Congress would agree on an economic relief package. According to Politico, Treasury Secretary Steven Mnuchin and House Speaker Nancy Pelosi conferred with Federal Reserve Chairman Jerome Powell on the package.

This rekindled optimism that additional money will hit the system and boost economic growth, which was stalling, after an initial, robust rebound.

Bulls should note that after the news on Trump’s , as well as progress on a stimulus deal, even outperforming NASDAQ futures were rounding down in the form of an hourly H&S top. 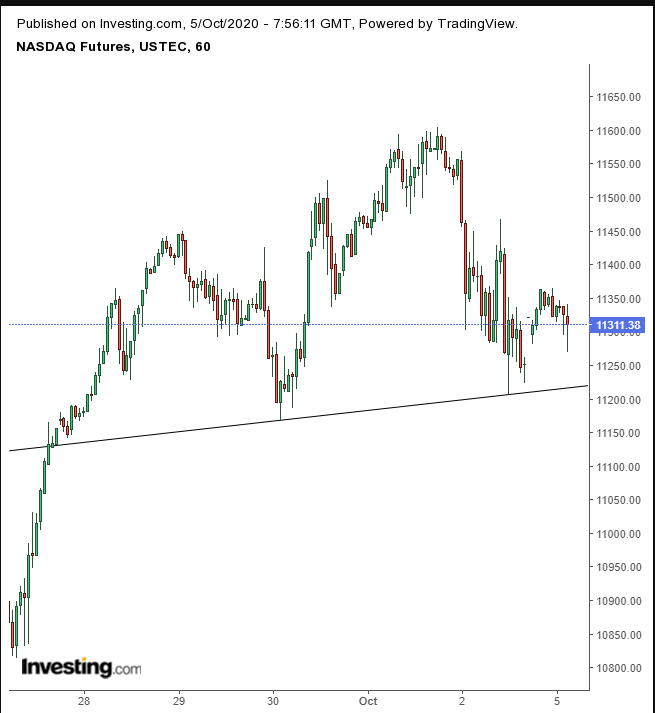 The Index climbed on Monday morning, with the banks leading the rally as investors expect financials will benefit most from new stimulus. 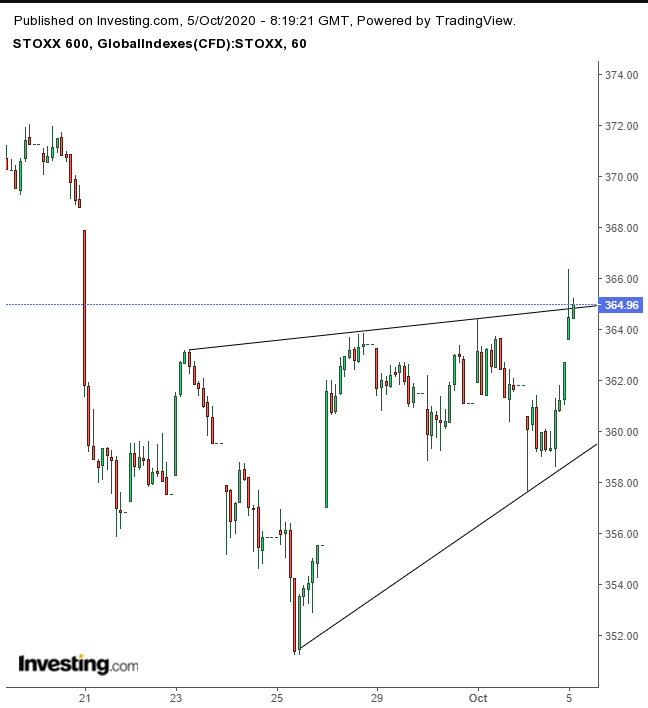 Technically, the pan-European benchmark is retesting a shooting star that confirmed the resistance of an hourly rising wedge, bearish after the preceding drop. This scenario supports the daily top.

Asia was painted green earlier on Monday. The gainers were led by the Australia’s (+2.6%) ahead of a early Tuesday. Chinese markets were closed for a holiday.

The renewed desire for risk allowed yields to rise to their highest level in more than a month. 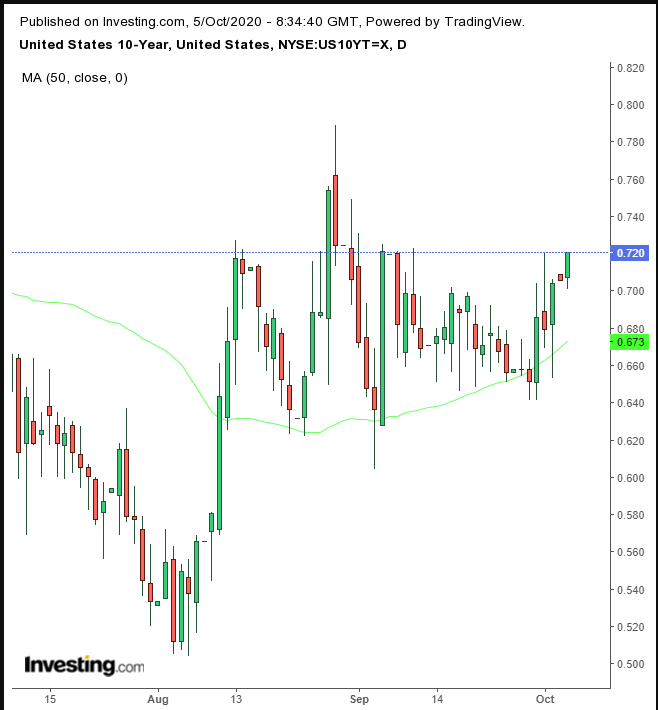 But Treasuries are still in play for a H&S top, with the 50 DMA as a natural neckline.

The expectation of further stimulus weakened the , which is being squeezed between a bottom and its falling channel since its March high. 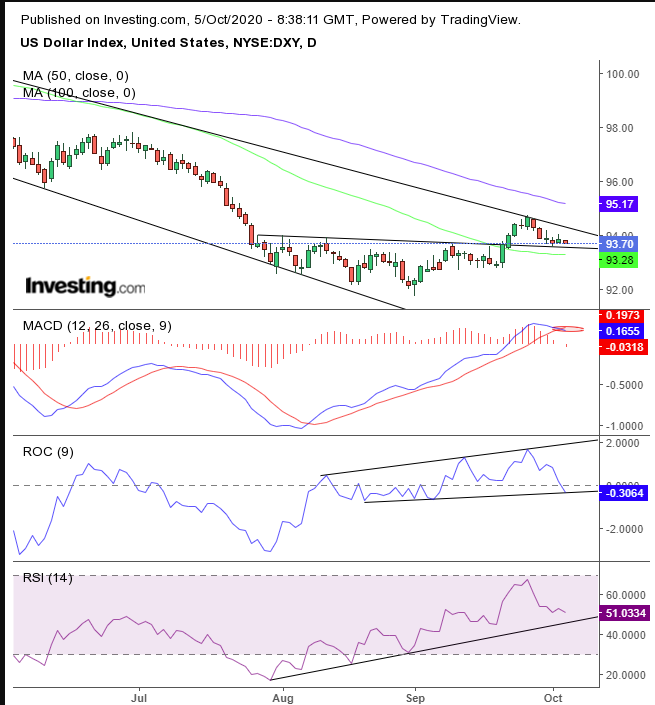 The chart illustrates this conflict, as the greenback is pressured between the 50 and 100 DMAs, with the MACD already providing a sell signal, while the momentum indicators still struggling.

weakened despite the dollar decline due to risk-on sentiment returning. 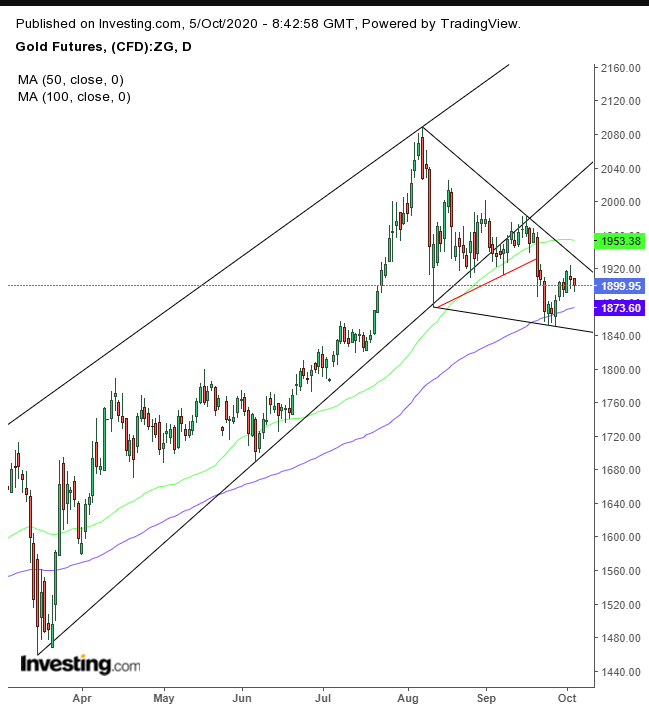 The precious metal recently completed a bearish symmetrical triangle which pushed the price below its uptrend line since the March bottom. However, should any further uncertainty arise from Trump’s medical condition, or the president leverages the situationto attack China, which he has been blaming for the coronavirus pandemic, the completed bearish symmetrical triangle can turn into a falling wedge, bullish within the still intact long-term uptrend.

The positive news about Trump’s health and the stimulus package improved the demand outlook for . 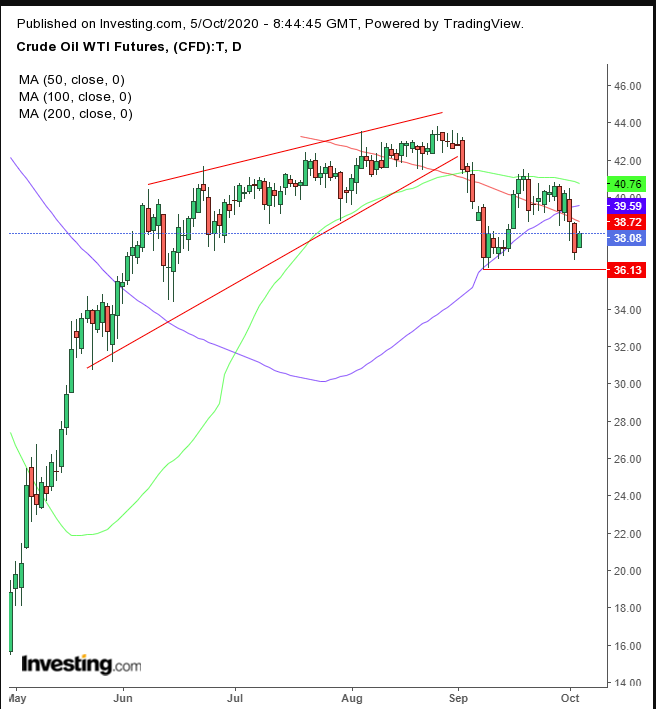 Technically, however, we still expect it to fall below $36, establishing a downtrend, following the rising, bearish wedge.