US contracts on the , , and as well as global stocks crept higher on Thursday after data showed that US was weaker than expected.

Gold is up for the fifth consecutive day while oil fell, ending its eight-day rally.

The soft inflation read unwound the reflation trade on Wall Street on Wednesday. The tech heavy fell just 0.25%, while the returned to laggard status, down 0.7%. Again, and more and more frequently, the technology sector is leading the recovery. All the major US indices hit all times highs during the session, but was the only major US index to close at an all time high on Wednesday.

In Europe on Thursday, the Index climbed, ahead of the US open after British postal and courier provider, Royal Mail (LON:) said record parcel volume had boosted . French headquartered, Credit Agricole (PA:) , the world’s largest cooperative financial institution, reported quarterly that beat analyst forecasts. The bank also pledged to resume dividends after the ECB partially lifted a ban it had put in place in the early stages of the COVID-19 pandemic.

Earlier this morning Asian markets closed in the green, except for Australia’s , which fell 0.1% on tech losses that mirrored those on Wall Street on Wednesday. China’s was the leading performer in Asia, up 1.4% after President Joseph Biden talked with his Chinese counterpart, Xi Jinping for the first time since he became US president.

While there was no policy change, the leaders of the world’s two largest economies appeared to strike a conciliatory tone, according to Oanda’s Jeffrey Halley. Although this is an improvement from President Donald Trump’s trade war, American officials have suggested export restrictions on technology and tariffs will remain in place.

The Japanese and South Korean markets were closed due to holidays.

US trading was yesterday, as the CPI data sparked a debate about the direction of inflation—we think it will just be a slower road to what seems imminent.

Twitter (NYSE:) surged 6.7% after the company its second $1 billion quarter. 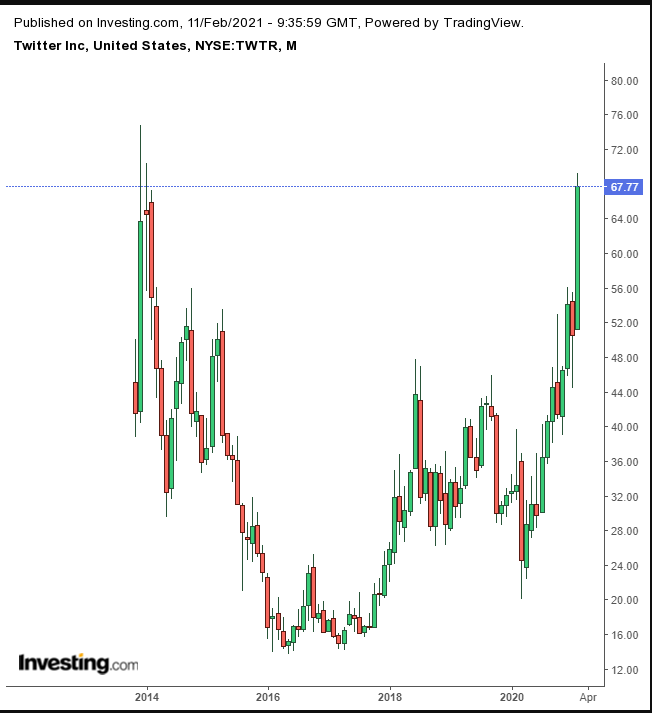 The social media stock is nearing its all-time high, the level when the company went public in December 2013.

The had a wild day. It developed a spinning top which reflected indecision following its 6% rally since the beginning of the month and eight consecutive days of increases. 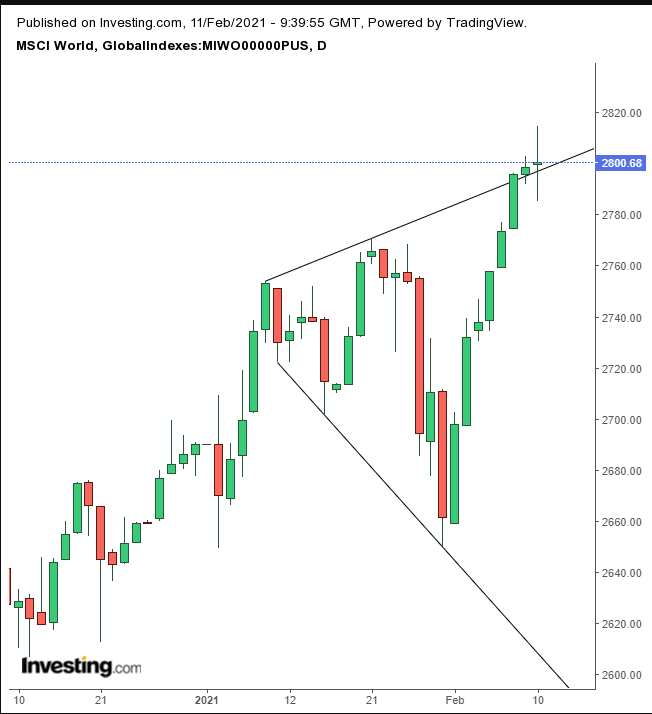 The fact that the potentially bearish candle stick is developing at the top of a broadening pattern intensifies the warning for potential upheaval.

The yield on the Treasury note rebounded from yesterday’s CPI-induced drop. 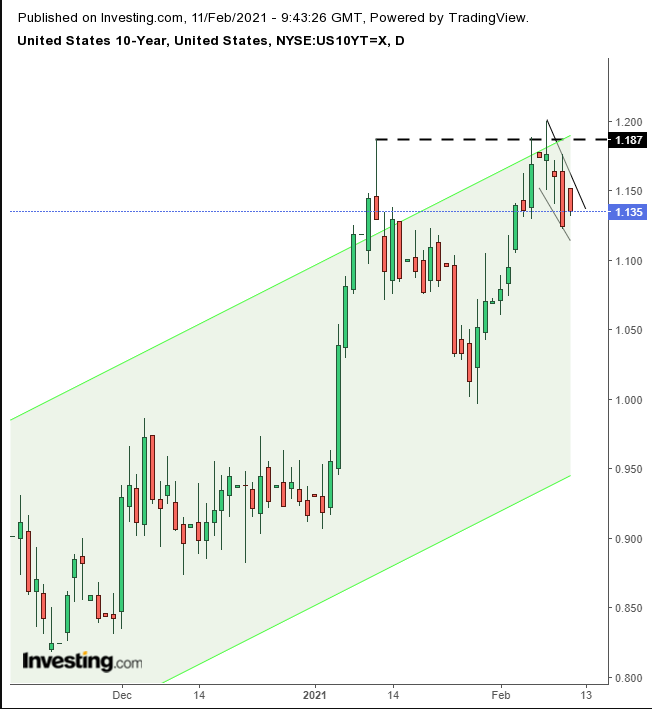 The downward congested pattern, following a sharp upward move, paused at the resistance of the previous high. The chart is exhibiting all the telltale signs of a falling flag which is expected to repeat the preceding rise past the 1.20% level.

The was little changed, following a four-day fall. 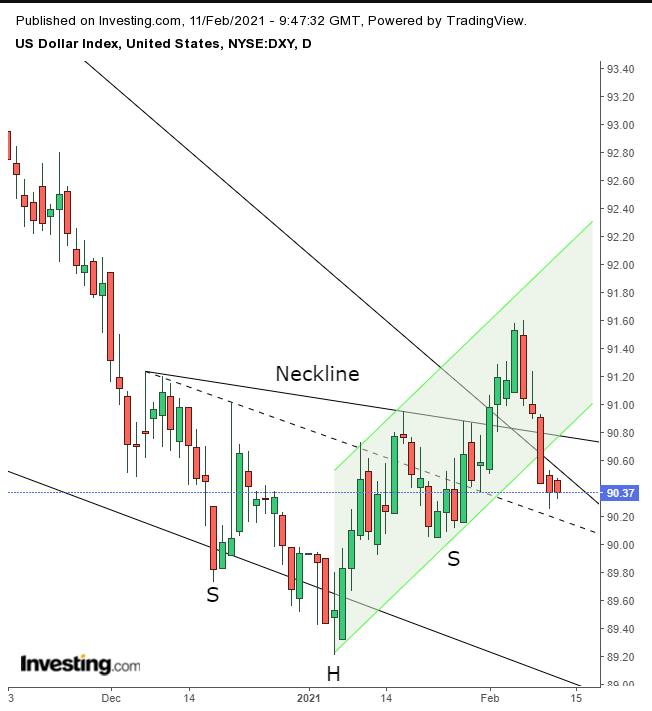 The greenback appears to have found support at yesterday’s closing, which rebounded well off its lows, right above a purist, conservative interpretation of a trend (dotted) line. Our choice for a trend line, the neckline of a H&S bottom, is being tested, along with the massive wedge since the March high.

is up for the fifth straight day on dollar weakness, as well as in its capacity as an inflation hedge. 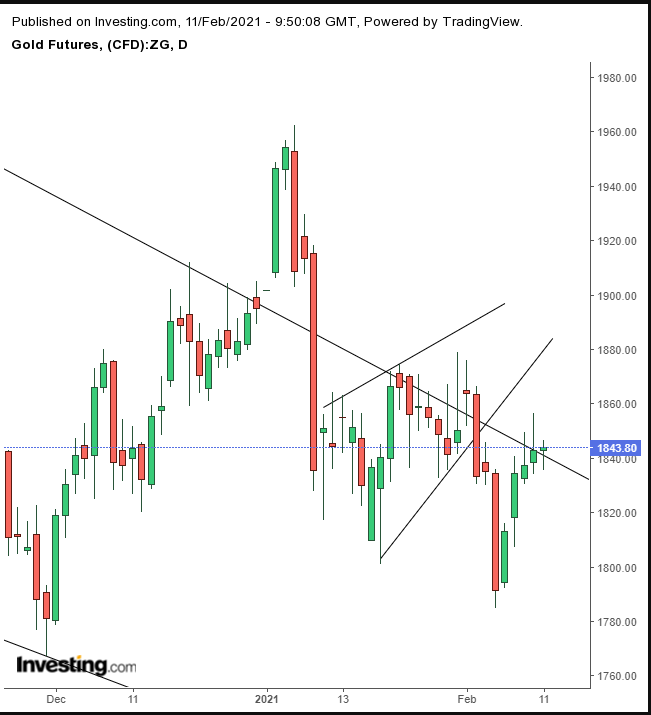 found its footing, climbing back above $45,000. The crytocurrency is back in the news after Tesla (NASDAQ:) announced it had purchased $1.5 billion in Bitcoin. Tesla founder and CEO, Elon Musk has also recently been the price of another cryptocurrency, .

fell, ending its longest advance in two years, which was driven by the prospect of economic recovery boosting the demand . 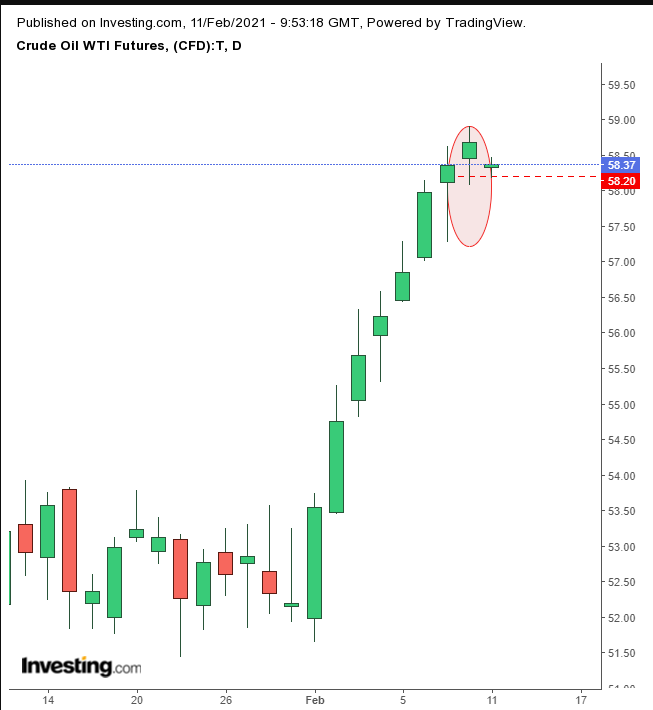 Today’s price gapped down from Wednesday, which opened higher than Tuesday’s level. If today’s price falls below $58.20, it will have completed an Evening Star.