Global shares as well as futures on the , and advanced on Wednesday as renewed talks on US fiscal stimulus and hopes that a Brexit deal is allowed investors turn a blind eye to the relentless spread of the coronavirus.

Future contracts on the were down as the on-again, off-again cyclical rotation, which led all major averages to new all-time highs, is expected to continue. As of the time of writing, it appears the tech sector will remain to be under pressure.

Global stocks received a boost after the Trump administration virus relief package talks, with a $916 billion offer. As time runs out before President-elect Joseph Biden takes over on Jan. 20, investors are betting on an imminent deal and that regulators will approve Pfizer’s (NYSE:) vaccine for emergency use authorization as early as Thursday.

A face-off between buyers and sellers resulted in futures for the NASDAQ edging lower, demonstrating that sellers are willing to compromise on their asking price to unload contracts. 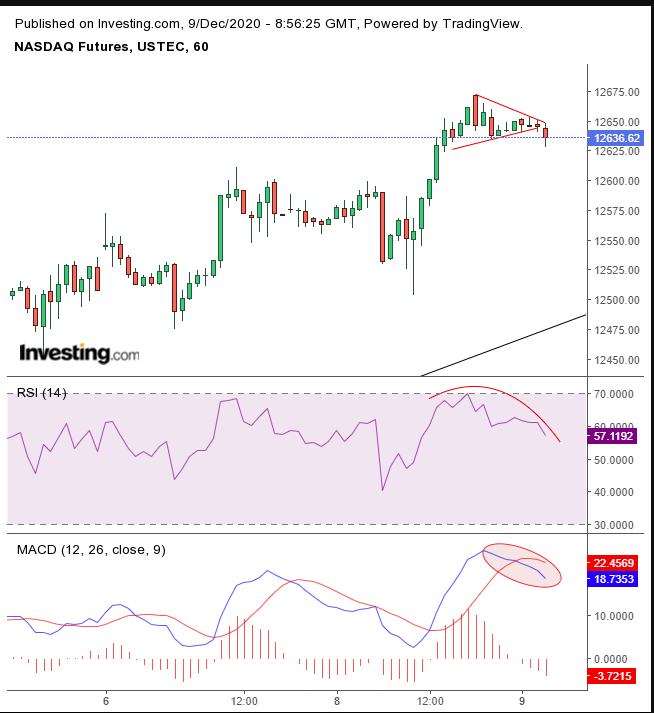 Perhaps the NQ will retest the uptrend line, in place since Nov. 2.

In Europe, the broke free of the range in which it was trapped since November, to reach its highest level since Feb. 26 amid the ongoing cyclical rotation between pandemic-driven sectors, such as tech, to stocks sensitive to economic recovery, such as banking and energy, which are benefiting from COVID-19 vaccine tailwinds.

This morning, the UK’s jumped to its highest level since early March, even against the backdrop of a strengthening . Recently, the index benefited from the weaker pound, which helped boost the country’s exports. As Prime Minister Boris Johnson heads to Brussels for dinner with European Commission President Ursula von der Leyen, traders are hoping that a Brexit deal both sides can stomach is on the menu. 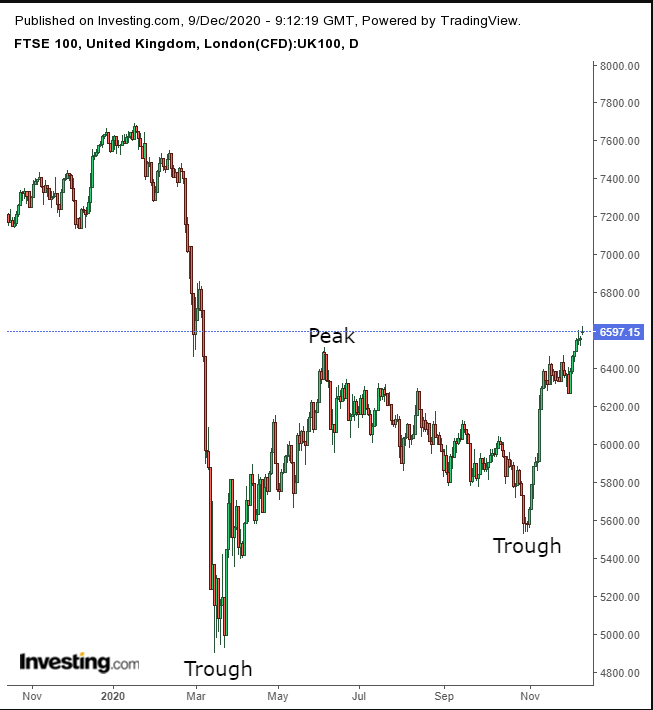 The FTSE 100 registered its second highest peak, completing a medium-term uptrend, despite coronavirus woes and the potentially far worse possibility of a no-deal Brexit.

Earlier today, most Asian stocks rose. Japan’s reached its highest level since 1990, while South Korea’s took home a double-record, hitting both a closing and intraday high.

China’s bucked the global uptrend and closed down 1.1%, after the country’s dropped in November for the first time in a decade, due to falling food prices. 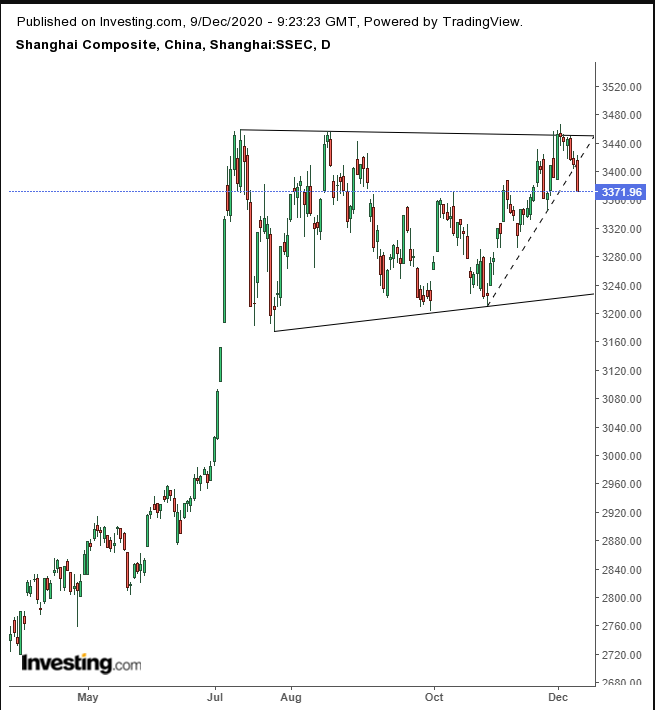 The selloff increases the odds the benchmark’s return toward the 3,240 level, the bottom of a range since the July highs. Any deeper downturn would confirm a top.

US stocks carved out new highs on Tuesday as a focus on negotiations over a fiscal aid package improved sentiment.

The notched both an all-time high and a record close. The snuck in a new intraday high but failed to lock in those gains at the close.

The and each registered a double whammy—both hit all-time highs and record closes. Still, the NASDAQ 100 underperformed after a ten straight-day gain. The also landed in the record books—hitting it highest closing level ever.

Yields, including on the note, rose, snapping a two-day decline, on the view of continued depressed rates.

Revised stimulus hopes, which would pump the economy full of cheap cash, lowered the value of the . Also, an ongoing foreign Treasury liquidation includes a USD sell. 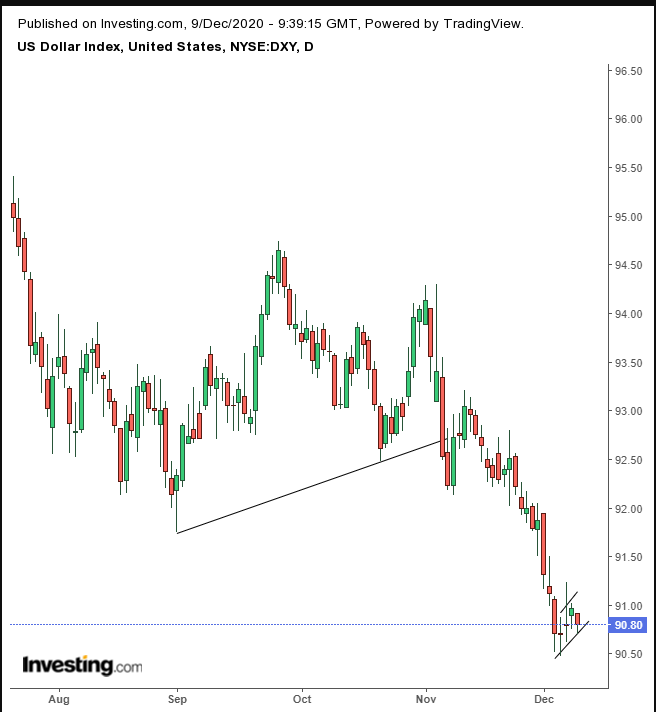 The greenback fell within what could become a dollar short squeeze—a period during which traders cover shorts thereby boosting the currency—the end of which will likely resume the sharp downturn that followed a continuation H&S pattern.

The greenback found its footing after falling against the to its lowest since mid-2018.

fell despite a weakening dollar as traders sought to increase risk. 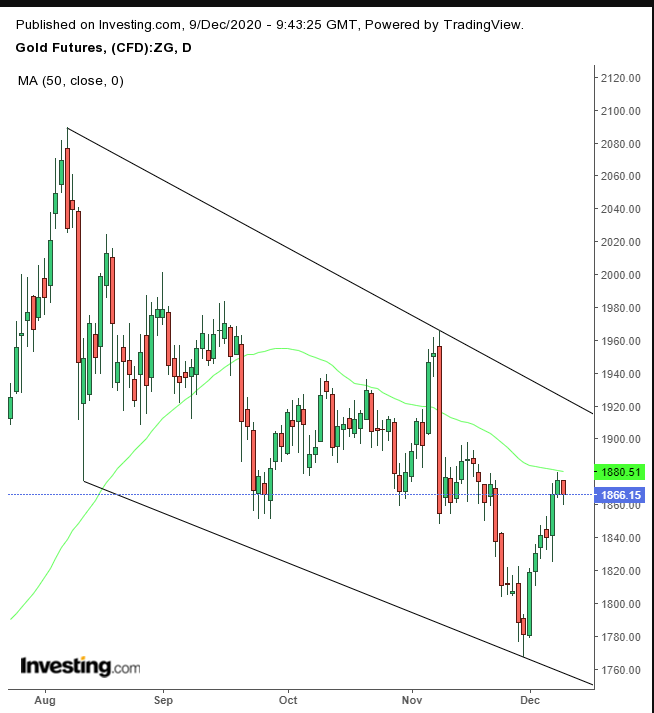 Technically, the yellow metal found resistance by the 50 DMA, protecting the top of a falling channel.

fell for the third day, blowing out a bullish pennant. 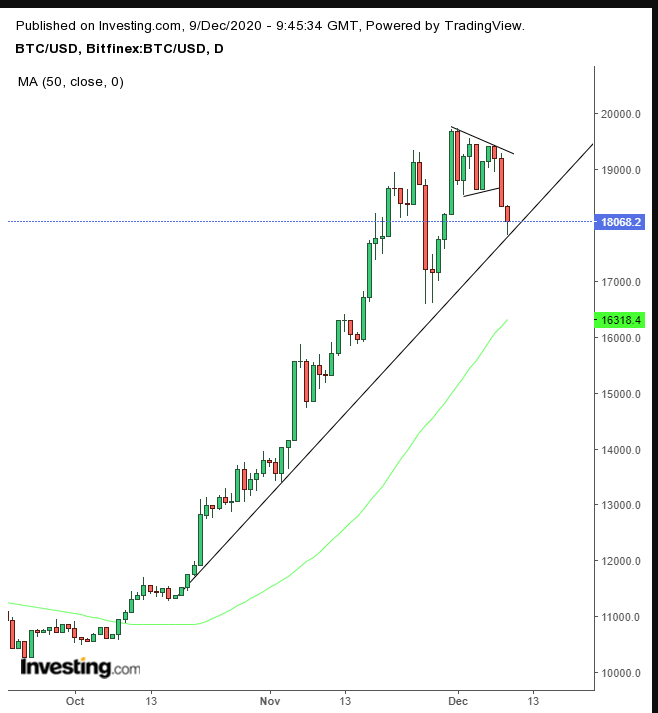 We expect the cryptocurrency to be propelled higher. Currently, it is testing its uptrend line.

bounced off the top of a bullish flag. 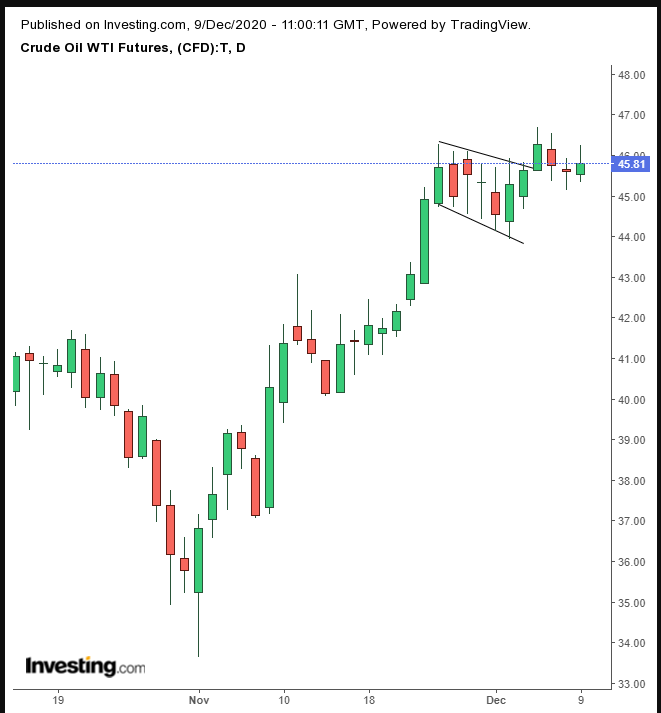