US futures on the , , and plunged in trading ahead of the US open on Tuesday, along with European stocks as investors seem to be taking the view that the return of inflation, after a lengthy absence, is negative for markets.

Gold slid while the dollar rebounded.

Tech was the laggard as contracts on the NASDAQ slid almost 2% at one point on Tuesday morning. The underperformance of the tech sector, while smaller cap domestic firms take the lead, has been the formation for a reflation trade—where prices rise because of increasing demand and output.

Until recently the outperformance of technology stocks, while domestic stocks lagged, was driven by the view that we would remain in a pandemic fueled lockdown for some time.

The tech sector also led the declines in Europe, dragging the lower for the second day in a row. On the other hand, energy related stocks, which have also benefited from the reflation trade, were higher. 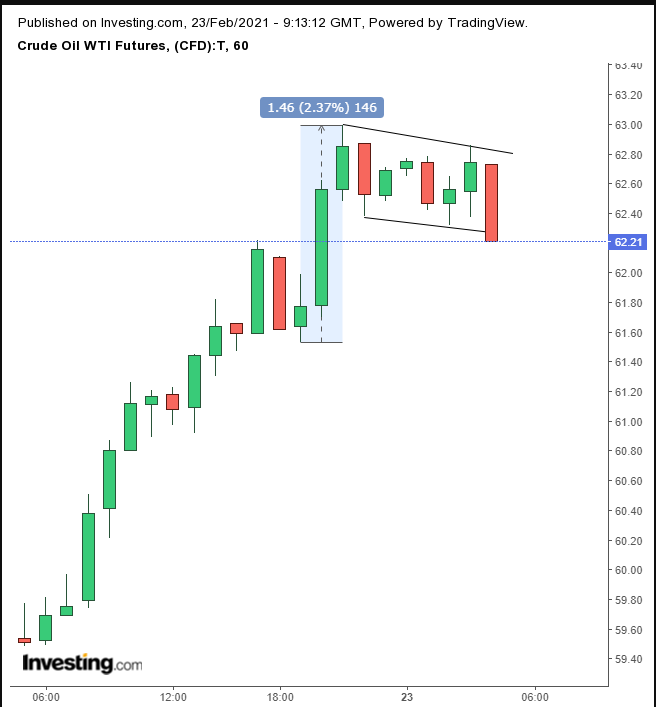 An upside breakout of an hourly falling flag carries with it a signal of the spike that repeated the breather investors took, with an implied target of overtaking the $64 mark. But, first, the pattern needs to complete an upside breakout, and right now, the price is testing whether enough bulls are willing to take over from earlier bulls, who cashed out on the 2.4% move in the three hours before equilibrium.

Another neglected sector during the pandemic that has gaining favor is banks. On Monday, shares of  HSBC (NYSE:) jumped during the Wall Street session after the lender  fourth quarter earnings that beat expectations. 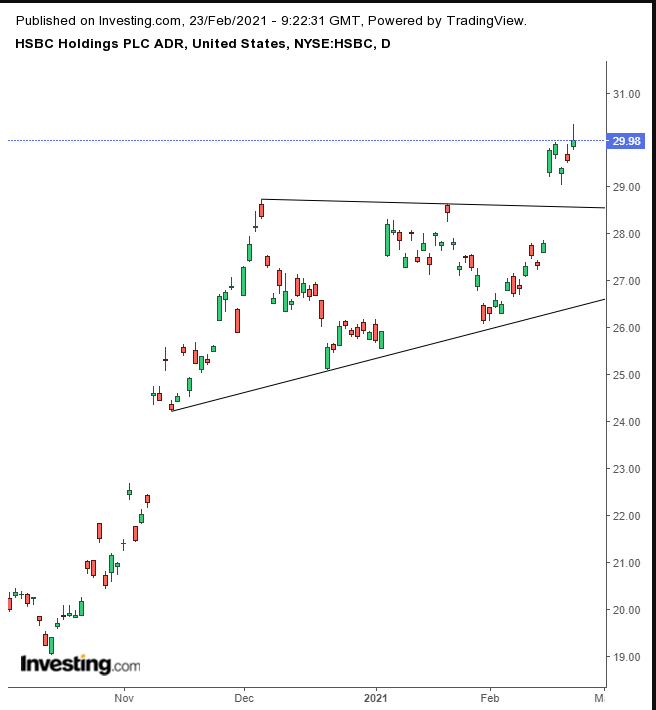 But markets can be incredibly capricious. In a rapid turnaround, this morning HSBC shares trading in London (LON:) slumped almost 3% after the global financial institution that annual profits due to the worldwide pandemic.

we explained why rising inflation is causing a market selloff, and today’s slump in US futures is likely for the same reason.

However, there is an ongoing debate in markets over whether inflation will create a head or tailwind to a recovery. Nevertheless, in either scenario, the technology sector is not expected to perform well.

On Monday, the sagged 2.5% to a three-week low, as rising inflation heightened traders’ focus on big tech overvaluations. The index declined for the fifth day in a row, its longest in a year. However, energy and financial firms, two sectors that would benefit from a recovery, were higher.

Yields, including on the benchmark Treasury note, extended their advance for the eighth out of nine days. 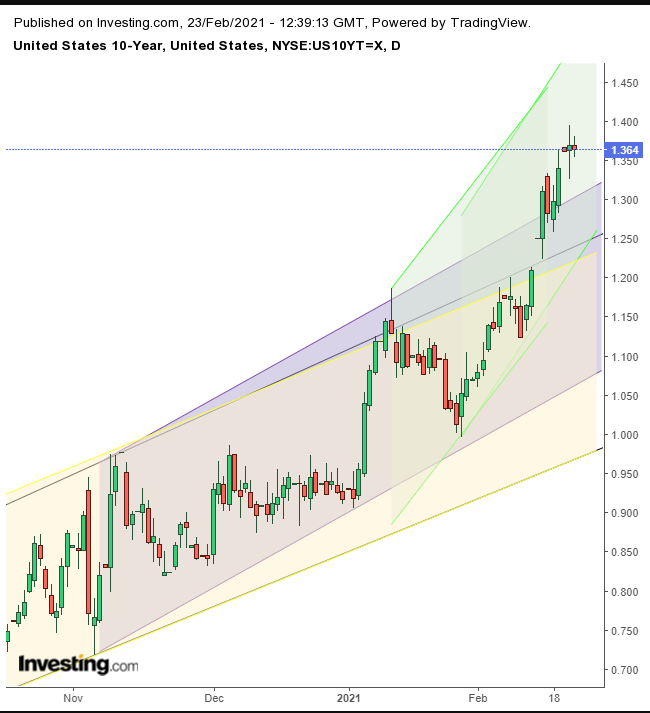 However, in the last three days, rates have ranged, after overcoming the top of a narrow rising channel, which has departed from the original rising channel since the August bottom.

The move suggests a continued advance—as investors keep selling off current Treasury notes in favor of future issues with higher rates, or other forms of haven assets, such as . 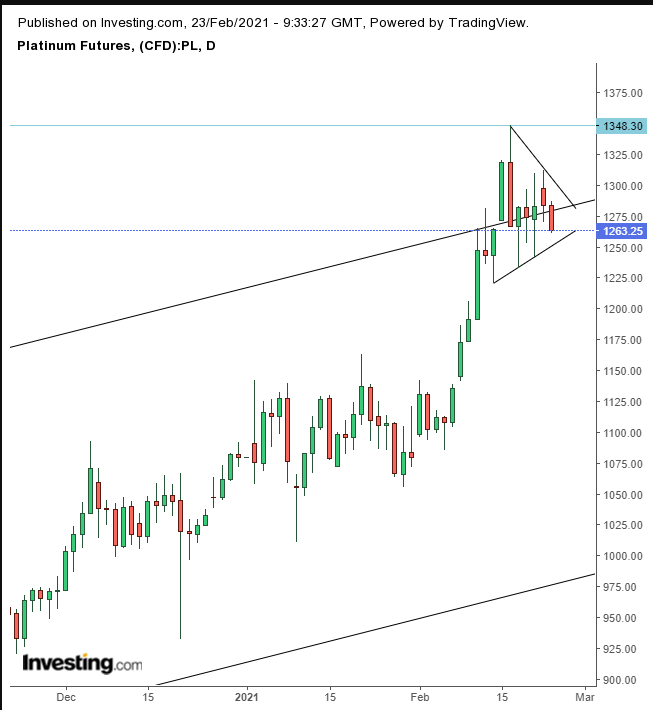 The precious metal fell for the second day, trading within a pennant, considered bullish—upon an upside breakout—following the preceding spike, as the price struggles with the top of a rising channel. 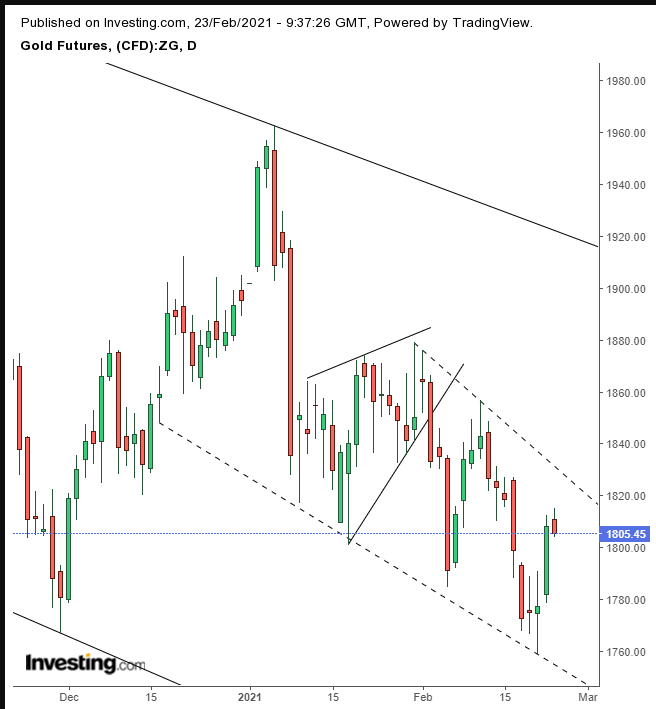 The rebounded to the top of a falling wedge since its March high. 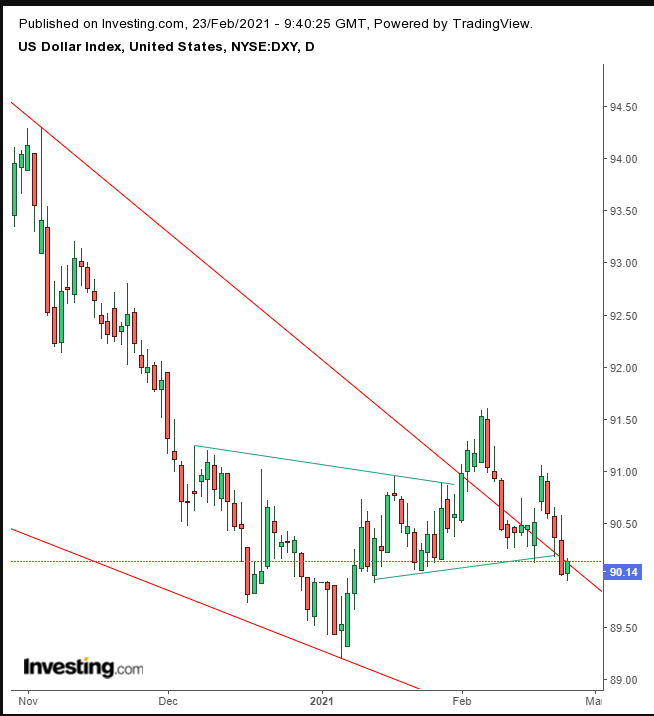 The greenback has been going crazy, creating back-to-back H&S, pointing in opposite directions. This kind of erratic activity jibes with the conflicting forces in play as the price nears its apex, putting the fire under traders’ feet to pick a side in which winner takes all.